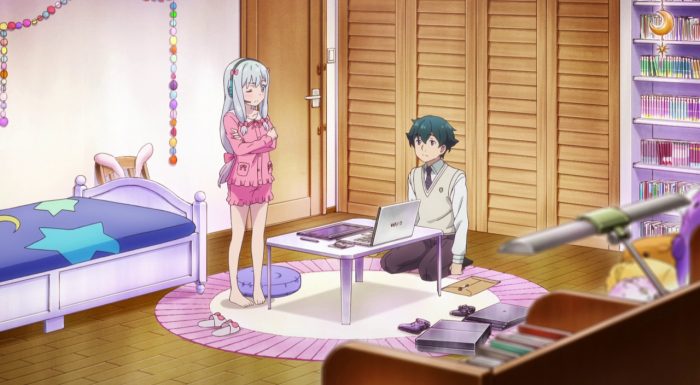 Okay, if you had told me before the Spring season aired that I would be writing a first look post on the Eromanga-sensei anime adaptation I would have laughed you to scorn. And yet here I am writing it! (Yes, yes – feel free to point and laugh in glee at the unexpected circumstances I find myself in here.) Even while knowing where the story is going, having read about 28 chapters or so of the manga adaptation, and knowing that the story itself is not really my “thing” in general, though, I was still … pleasantly surprised by the first episode. Don’t get me wrong though! (Tsundere mode activated here.) While there are still plenty of things I am uncommonly wary about regarding this series still, I must admit that the premier ep was … better than I expected. Not by much, mind you, but it was still a surprise. Who knows where the series will go, but for now I feel I should call a spade a spade. 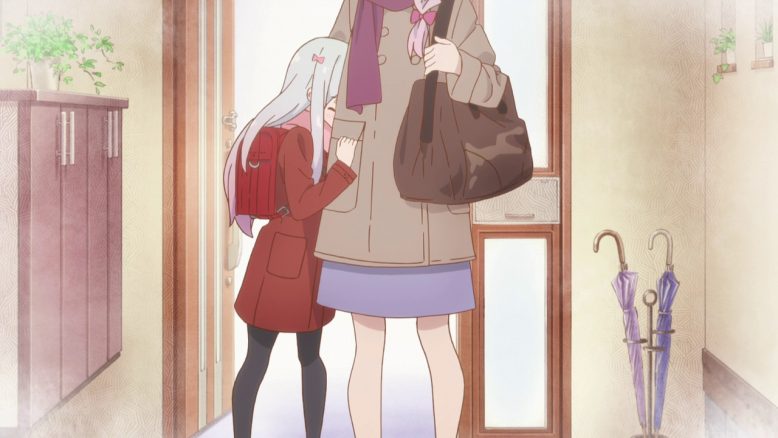 For those unfamiliar with the series here is a summary: “When Masamune Izumi was in middle school, he began writing light novels professionally. Now a high school student, his former hobby has become a way for him to support himself and his younger sister Sagiri. Following the death of their mother a year ago, Sagiri has stopped leaving her room, so Masamune simply leaves food outside her door, communicating through notes with her meals as she responds with thumping on the door or floor of her bedroom. But what Masamune doesn’t know is that Sagiri is actually the illustrator he’s been working with all this time, “Eromanga-sensei,” whose sexy pictures are a major draw for his books. When a livestream reveals her true identity to Masamune, these siblings’ lives are shaken up – but that might not be such a bad thing.“ 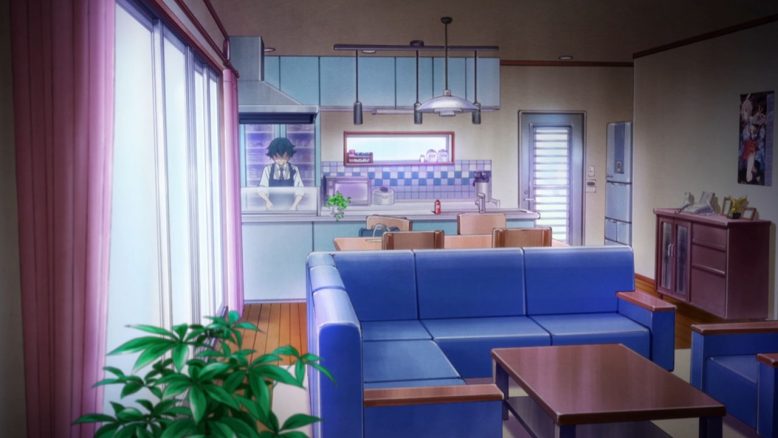 Yes, I know. The setup is rather improbable, and to make matters worse the author of this story is the same who penned the frustratingly awful “Ore no Imoto ga Konnani Kawaii Wake ga Nai” novels (and anime adaptations). Just the mere fact that the author wrote those series is honestly one of the main reasons I am incredibly cautious about this one. For me it is one thing for family members at odds to actually begin to see each other as human beings and begin to develop some modicum of respect for one another – I find I enjoy such stories about reconciliations and such. But it is completely another issue when introducing taboo sexual elements as the main driver behind the relationships. To be frank I don’t want to be exposed to that, and especially do not want it promoted in mainstream media – keep it on the fringe thank you very much. -_- 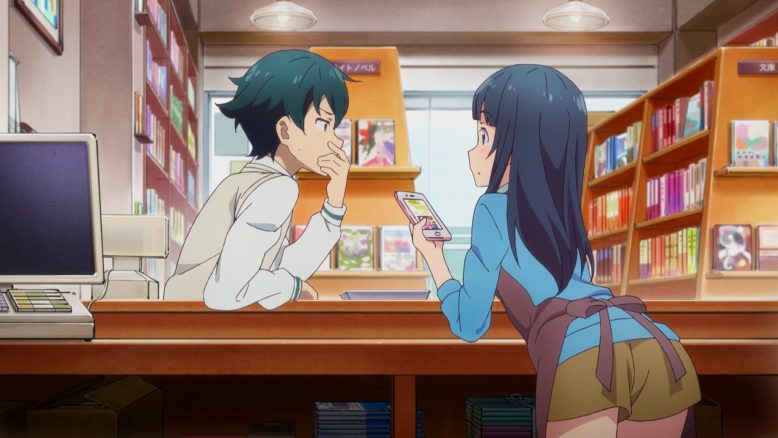 All those things aside, though, there is something to be said for giving a series even the slightest sliver of a chance – after all, every so often one’s fears are unfounded. It is with such a frame of mind that I braced myself before watching the first episode. And … well, as I mentioned earlier I was kinda pleasantly surprised. The story (and there actually is a story here – it is not just a series that is an excuse for idiotic romcom humor) did not go in directions I was dreading it to. Hopefully they will not head there in future episodes and instead will opt for the more “wholesome” approach (though I am not holding my breath), but really, the production qualities were … good. I even would move towards really good. 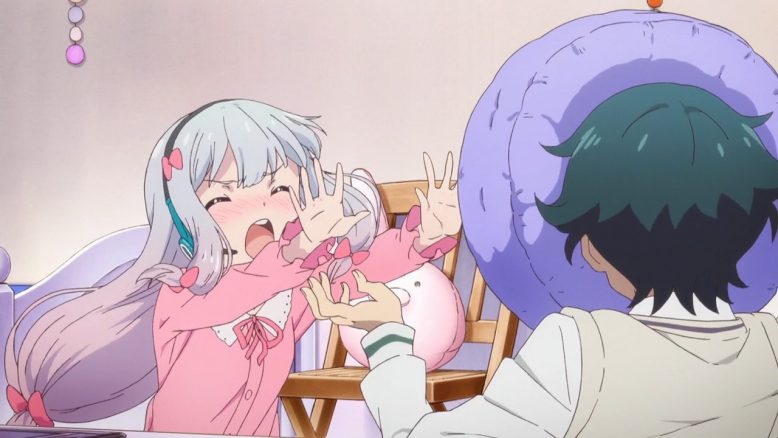 The character designs were quite appealing to me, and the characters themselves were decently semi-normal! Also, the art, both for the interior and outdoor scenes were … really nice; I especially enjoyed the shots of the kitchen and adjacent living room area of the Masumune household and the “classic spring time” sakura tree drawings. A-1 pictures did an excellent job on this front in the first episode, and with the success of the Demi-chan series last season it is nice to see them “on a roll” of sorts visually … I have very often enjoyed that studio’s character designs especially. Furthermore, the VA work also was quite appropriate, I thought, stretching across both the main and the “minor” characters, and the OST seemed plenty fine. One big plus was being able to hear the recent version of ClariS singing the end song (though apparently it is actually the OP I hear), and they sound as enjoyably as always. 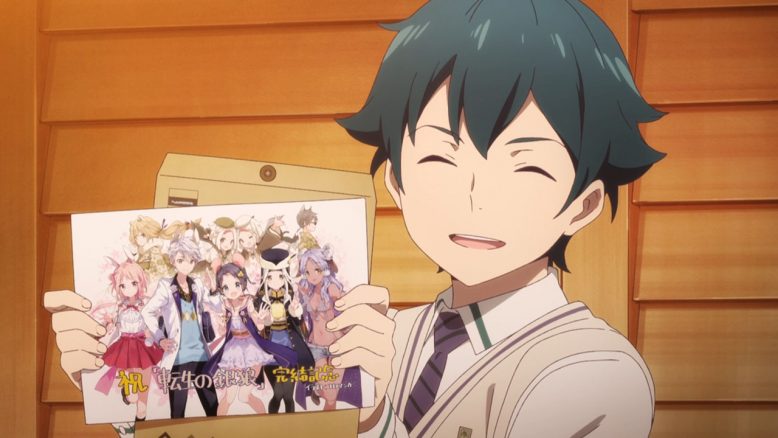 If I had to grade the first episode in terms of how much I enjoyed it I would probably give it somewhere around a C+, but you have to realize that I originally thought it was going to be a terribad experience that I would turn off after the first few minutes. Not so. Yes, it is only a C+ grading, but in comparison with what I was expecting yes … I was modestly surprised. There is no way I am going to be blogging this series, mind you, and whether or no I will continue watching the series to the end is entirely dependent on where the story goes (again, my expectations are jaded and low), but chalk the premier episode up to being an unexpected surprise. ^^