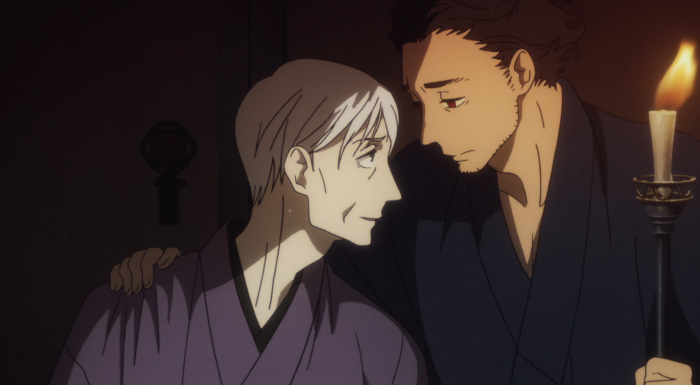 Not content to simply kick me in the feelings every week, Rakugo Shinju decides to ratchet up the tension and stress me out as well. Right from the opening theme, which sees the return of Sukeroku’s (friggin’ terrifying) shinigami eyes, there’s the promise of impending disaster lurking right around the corner; a sense that we’ve reached a breaking point and something is going to have to snap before we can go anywhere else.

I mentioned last week that we’d entered a kind of narrative twilight between past and present, “saved” and “lost,” as we waited to see which direction the characters (Yakumo in particular) chose to travel. This week we may have taken a step away from that crossroads and into a specific direction, and it may ultimately be a positive one. But it comes at a steep cost, and I ain’t just talkin’ about my poor heart. 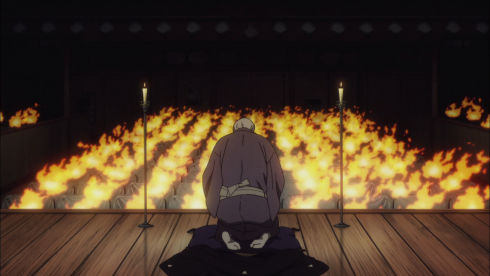 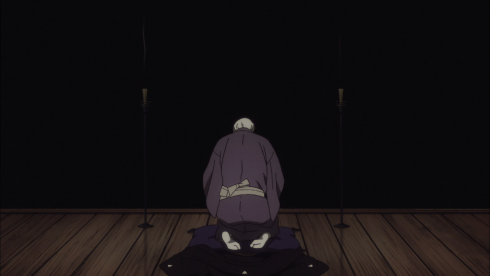 We begin harmlessly enough, with the guys heading to the bathhouse, a location that’s been used before in the series as a place of refuge and emotional intimacy. Yakumo seems like his usual prickly self, and the love and admiration expressed by both Yotaro and Shin is genuinely heartwarming. Even so, there’s a sense of guardedness from Yakumo that’s unusual for these bathhouse scenes.

In the past, this was where he was able to express his deepest insecurities–crying when he realized he’d been abandoned, admitting to Sukeroku that he “wasn’t allowed” to complain–but this time he’s still keeping his family at a distance, claiming to have done everything “on a whim” and complaining about Shin even though he’s putty in the kid’s hands. It’s a promise that things are not as normal as they seem, and that we can’t relax yet. 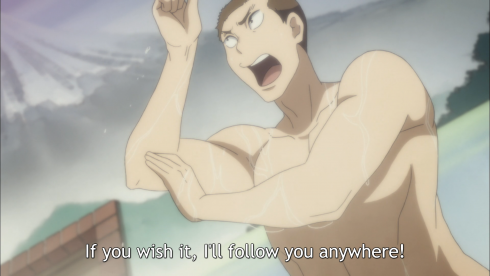 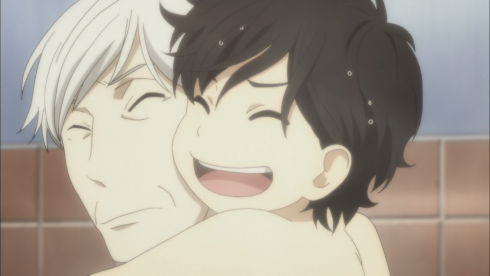 The next few scenes are a continual build-up, though I’m not sure if we should consider them failures or fulfillments. First, Yakumo agrees to perform at the prison where Kida’s being held, not only doing rakugo again but doing it for another person rather than himself (something he’s always claimed to be uninterested in). Then he attends Yotaro’s “Inokori” performance, or at least part of it, before giving his fan to Higuchi and asking him to “take care of Sukeroku” (meaning both Yotaro and the fan itself, I’m sure). It’s functionally a suicide note, and the look on Higuchi’s face suggests he knows it, too.

Last week, Yotaro urged Yakumo to find his raison d’etre via rakugo, through his own performances and/or through seeing Yotaro’s “Inokori.” This week, Yakumo does both of those things before seeking death. So was he attempting to work through his depression and keep living the way Yotaro and Konatsu begged him to do, and just couldn’t do it? Or was he fulfilling a handful of final promises and wishes–essentially getting his affairs in order–before a moment he’d been planning for months? Given his talk of “loving this world” in the last episode, I suspect it’s the former, but the events this week are so methodical that you could make a case for the latter as well. 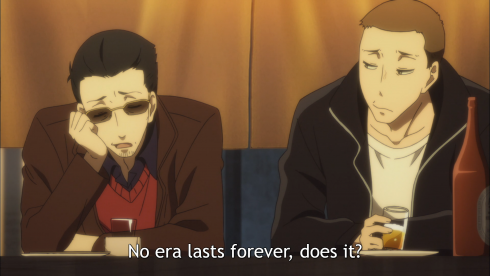 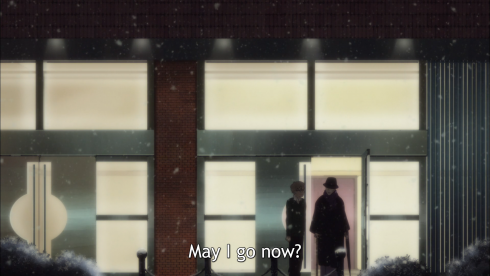 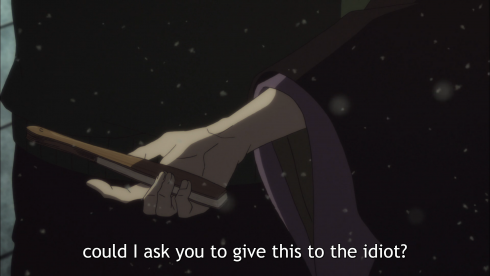 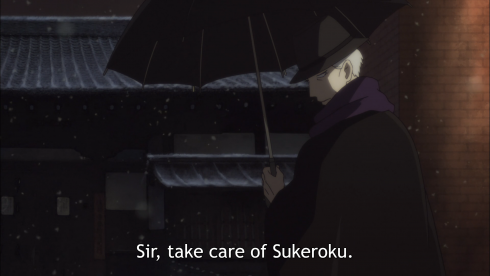 There’s a perpetual layer of ambiguity and uncertainty to this series, which makes it fascinating to watch but sometimes difficult (and occasionally frustrating) to write about. I can offer my own interpretation of events based on what we’ve seen and heard so far, but I’ll freely admit that there are multiple readings that could be just as possible, at least given what we know right now. I think that’s largely intentional. Rakugo Shinju is, after all, about storytelling and performances: about the interplay between fiction and truth, the shift between our public and private selves, the difficulty of expression, and the gap between self and other. So of course the story itself would be open to interpretation too.

Perhaps more importantly, that sense of uncertainty reflects Yakumo’s own complicated feelings and memories, pulling us into the tangle of contradictions that form his character and his relationships with others. He loves and hates rakugo, grateful for the art form itself but bitter about the power structure that rejected Sukeroku and forced him into a position of authority he never wanted. He cares deeply for others but refuses to admit it lest he be abandoned (and hurt) once more. He claims to do rakugo for himself but then laments that he can’t perform anymore because his voice no longer reaches the audience. He sees death as both a dear friend and a terrifying foe. And so on.

His feelings about Miyokichi and Sukeroku are equally fraught, as the two represent many of the best and worst moments of his life. They’re simultaneously comforting memories and vengeful specters, people he loves and people he’s come to dread. It’s why he imagines Miyokichi whenever he’s reciting stories of lost lovers, collapsing into her arms and asking for forgiveness even as he refers to her as “the one who stole everything from me.” And it’s why he pictures Sukeroku at the end of his life, both confidant anddemon, ready to listen and destroy in equal measures. 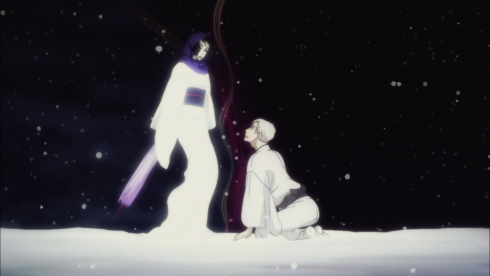 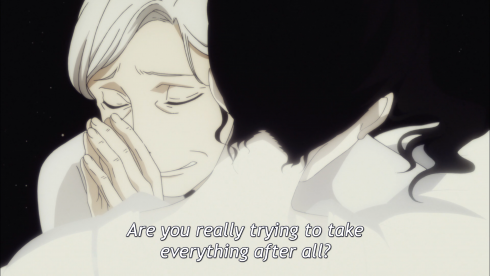 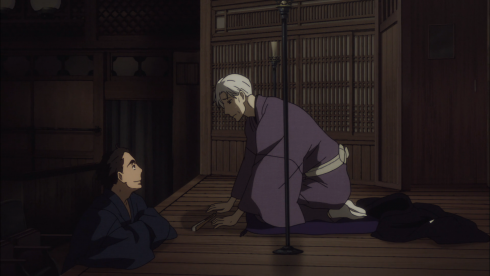 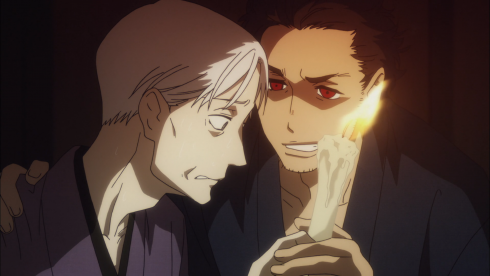 Yakumo’s rakugo has a magical quality to it, as if his performances are able to create other worlds. In the past I’ve discussed this in terms of how it affects the audience, but it’s clear that this is how Yakumo sees his own rakugo, too. He draws himself into these realms as much as he does others. It’s a spell of sorts, an invocation of imagination. As such, I don’t think the Miyokichi and Sukeroku we see are literal ghosts, but rather projections of Yakumo’s memories of and feelings about them. What they say and do tells us more about Yakumo and how he sees them than it does about the “ghosts” themselves.

With that in mind, Yakumo’s invocation and subsequent conversation with “Sukeroku” is a delusion of sorts, a debate he has with himself, and particularly with the part of him most overcome with anger and despair. The spectral Sukeroku isn’t interested in saving rakugo, but only in finding out if Yakumo truly wants to see rakugo destroyed. It goads him on, reminding him that hasn’t actually gone through with his rakugo double-suicide because he’s “too swayed by affection.” He calls Yakumo’s love for others his “greatest sin” and literally forces his hand, casting the candle into the theatre.

It’s a hauntingly effective visual representation of destructive impulses, of the way depression and pain can seem like separate entities, moving people in ways they don’t necessarily want to move but can’t seem to stop. Yakumo is horrified, clinging to the vision of his dead friend, but there’s nothing he can do. The damage has been done. 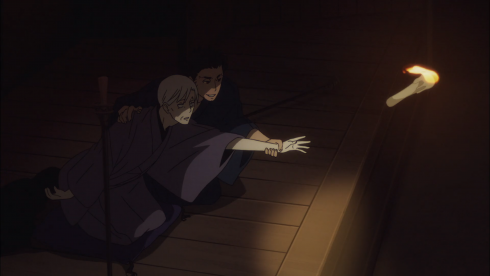 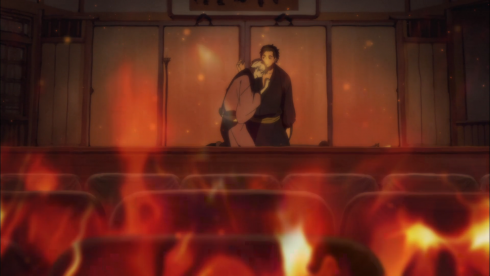 I’m still on the fence about whether Yakumo intentionally set fire to the theatre or if he accidentally knocked the candles over when he collapsed (there’s some discrepancy in when/how the candlesticks get knocked over and where the candles wind up in various shots, which may point to a gap between what Yakumo’s imagining and what’s actually occurring). It’s possible that everything with “Sukeroku” is an extended fever dream, a half-conscious man grappling with the reality of the theatre collapsing around him and realizing that a part of him, deep down, really did want to see it all burn.

Whatever the reality of the situation, Yakumo sees himself as the cause the fire, all of which leads up to a sudden horrifying realization: He is going to die here. “Sukeroku” transforms from friend to destroyer to shinigami, the “god of performance” that Yakumo was so certain he wanted to meet. There’s a brief moment of relief within that terror, when Yakumo allows himself to be held in those skeletal arms–but it vanishes when Yotaro arrives on the scene, desperate to save his master once again. 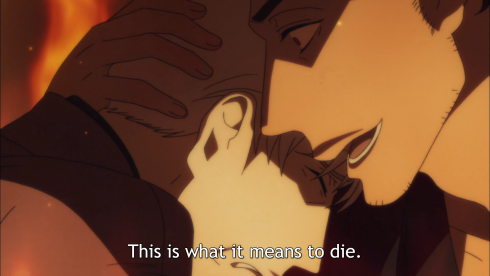 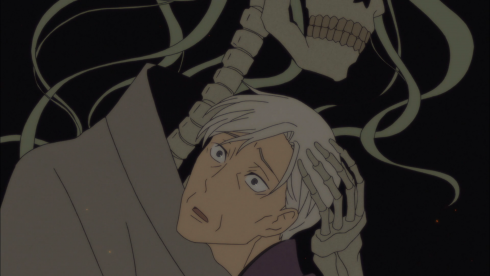 There’s a beautiful visual that seems to occur more often in anime than it does in other mediums, where a character at their lowest point is offered an extended hand from someone they love. (I’ve personally discussed it in both Utena and Noragami Aragoto, by the way). It’s a pretty near perfect representation of salvation, suggesting that while everyone sometimes needs help from others, each person also has to decide to be helped. Ultimately, no one else can save us. We have to save ourselves.

Yotaro can’t reach his master on his own. Yakumo has to meet him halfway. And as the flames look ready to consume him and his student, he suddenly realizes that he desperately doesn’t want to die after all. That, for better or for worse, he isn’t ready to “let go” just yet. So he reaches out and he takes that hand, and he finally, finally asks someone to help him. And Yotaro is, of course, more than happy to do so. 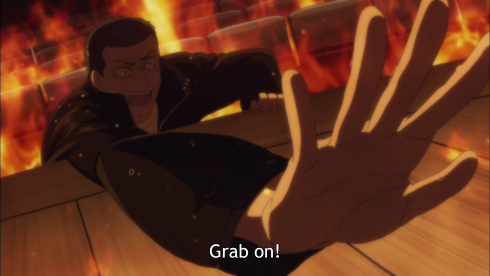 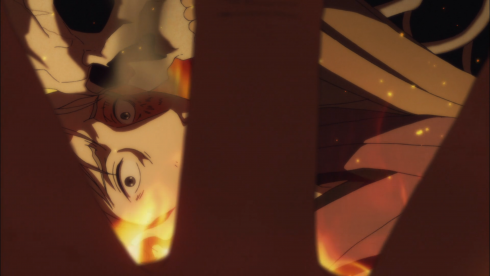 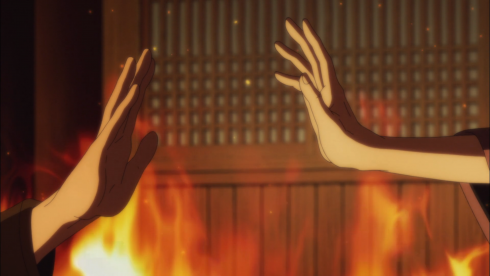 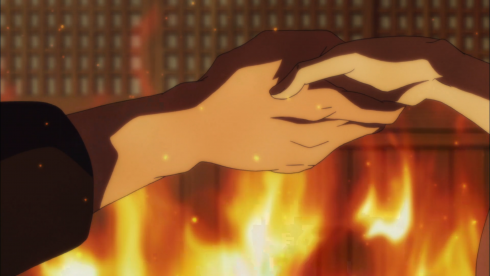 As our first rakugo performance tells us, this is an episode about prisons: about the walls that get built to separate people as punishment for crimes both real and perceived. Not all of those prisons are literal ones. Yakumo had built himself a dark cell on a stage, severed emotionally from the people he loved and who loved him, thinking himself deserving of solitude for the “crime” of Sukeroku and Miyokichi’s deaths. Like the lovers in his rakugo story, communication had been cut off, leading to a slow withering and eventual death. It’s only when he’s at his most vulnerable that the walls collapse (or, more accurately, Yotaro bashes through them) and he’s able to speak the truth again.

It reads like a significant revelation and turning point in our story, Yakumo at last moving towards reconciliation instead of perpetual isolation and self-torture. Or at least I’d sure like to hope so, otherwise we’ve got a long, painful final stretch of episodes ahead of us. Yet the theatre is still in ashes, and Yakumo’s final line is heavy with misery. As unhealthy as it is for him to wall himself off, we’ve talked at length before about the danger of “failing to let go,” too. As always, there will need to be a balance struck here in the coming weeks. Rakugo Shinju is a story of contradictions and complications. Any resolution we reach is bound to be the same. 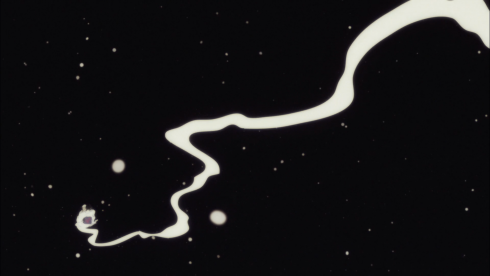 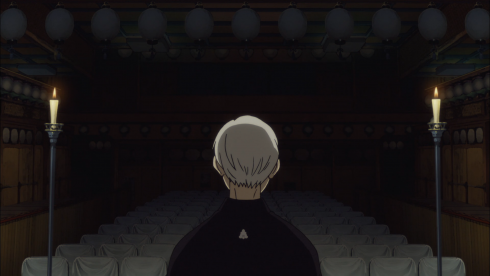