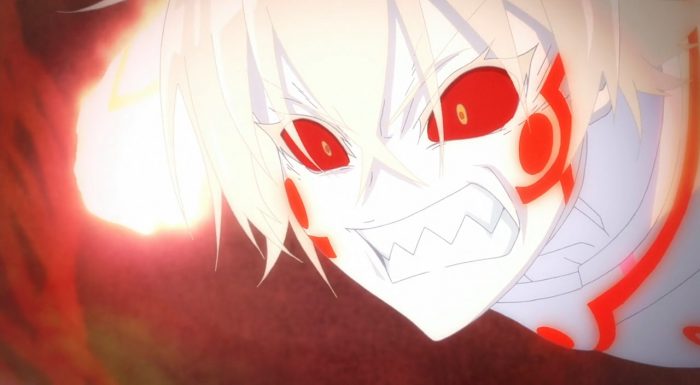 Well if nothing else I’d say this episode deserves some props. Oh sure Rokuro turned into a giant monster and it seems to be proceeding down the cliché path I expected, but there was one great positive coming out of this. Yuto is finally dead! Although sadly I’m not happy he is dead just because he was the villain in all this. I’m just glad we won’t have to hear him speak ever again. My god that guy was beyond annoying. I’m sorry that things didn’t go well for him or that he found out how pointless his existence was. But wow he was so damn annoying. Even just Yuto getting overwhelmed was annoying since he was freaking enjoying every second of it! There is nothing worse than an enemy that becomes completely masochistic near the end. 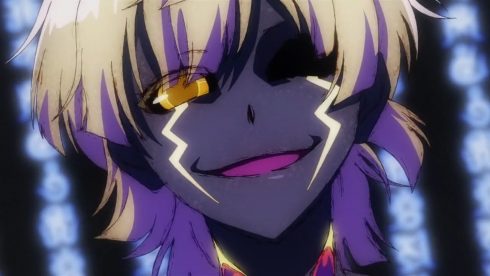 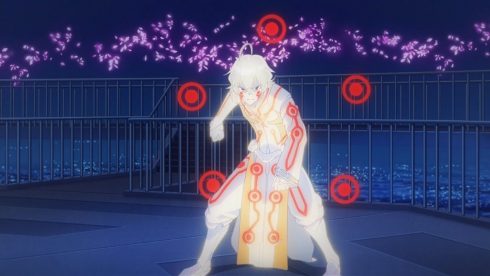 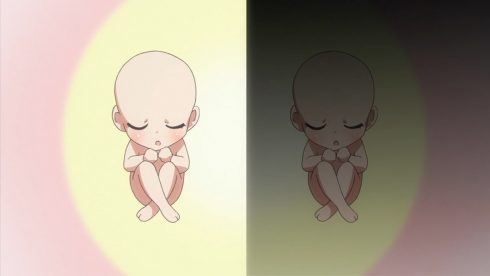 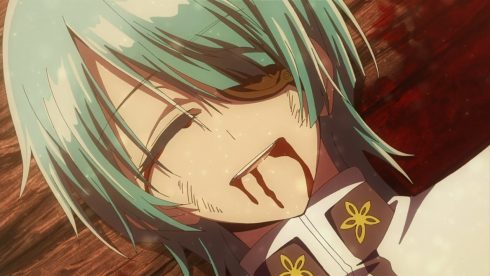 There is at least one other thing I can approve of. At least the show actually bothered to make Benio as relevant to this situation as Rokuro. I mean she doesn’t seem to get anything cool from being this accumulation of positive energy, but at least she’s part of the story. It is still annoying beyond measure that the story sidelined her during this conflict. He is her brother! How does the story think she should not be involved in his defeat? Whatever, I guess Rokuro can’t turn into a villain if she’s there or something. Although I think you could make it work. And now we’re set up I guess for Benio to wake up, go on a quick hero’s journey and power herself up so she can deal with Rokuro.

I’m not sure this ever really deals with Yuto in a good way. I mean do we ever get a real reason for him going evil? Sure he was also an accumulation of negative energy, but so what? In this story Rokuro is the same and he turned out fine. In fact he never showed the kind of problems Yuto had even from childhood. Yuto was just weird from the start. Oh sure it was a nice flashback to him and Rokuro as kids, but not sure we gained anything from that. In the end he’s still a sociopath that murdered everyone around him for no reason. Finding out his life was pointless later didn’t impact his stupid decisions earlier in life. I’m just glad this guy is dead so he won’t pop up again. 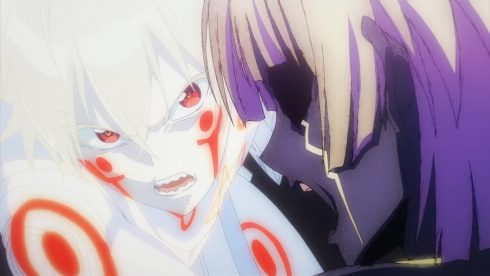 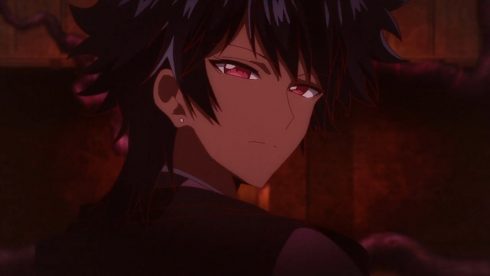 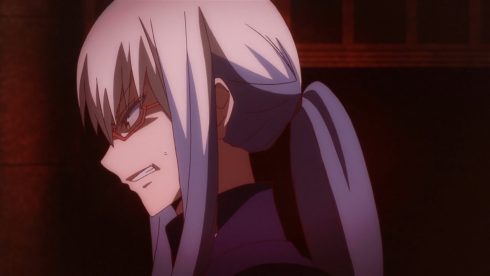 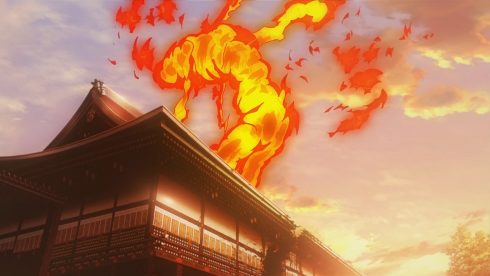 So yeah…Rokuro became a giant flaming titan. That’s something. I’m sorry, but anyone who doesn’t move from that town after this show is over is an idiot. That place should literally become a ghost town. They’ve had monster invasions, a city lifted into the sky, and now a giant flaming monster attacking them. Who the heck would stay there? Regardless of that, now things are looking horrifically bad. I suppose Arima does deserve a “oh I’ve screwed up” moment in seeing their suicide plan totally flop. That’s what you get Rokuro when you think things will turn out fine. Though that is quite the recovery power that the King of Cataclysm has in being able to survive an exploding heart.

Well it isn’t a surprise that something weird was up with Mikage/Abe no Seimei (no idea how that works). It is a bit of a surprise to hear his actual identity. I suppose it makes sense why he was a total traitor since he knew what was going on and was simply trying to create a situation that would turn Rokuro into a pure monster. I’m not even sure why Arima actually confronted him. I know it works as an exposition source for us the viewers, but it makes no sense for him to go there. He has no ability to really fight and hanging out around the corpses(?) of his former allies hardly seems fun. And no sign at this point that the 12 Guardians are coming back despite Yuto dying. Well that sucks. Maybe someone will tell Mayura that Shimon is dead before the show is over. 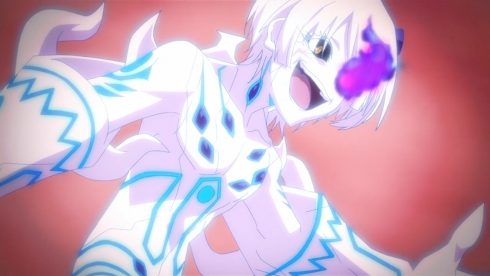 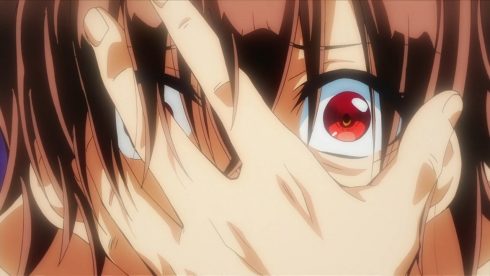 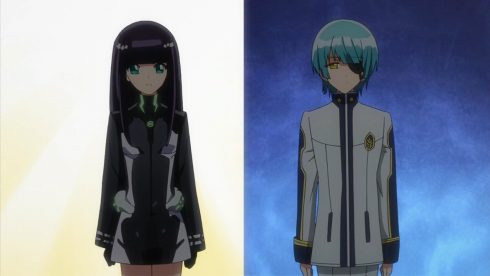 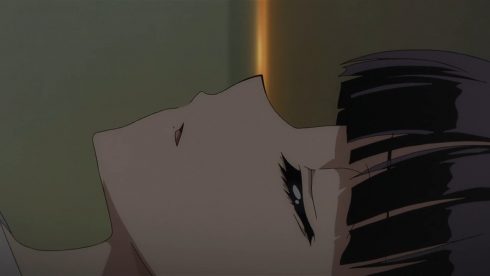 So I guess this is a solid time for Benio to wake up from her nap XD. The story now has a use for her so she can get moving again. I guess this will take a few episodes to work through though; probably some more Benio soul searching, finding a way for her too to power up, and then going after Rokuro. I’m sure she’ll have a few surprises to wake up to. And it kind of sucks that she has to deal with the emotional trauma she’s suffered, her brother dying without her getting a chance to settle things with him, and now finding Rokuro is literally a giant monster.

The path forward seems pretty simple. They may have to defeat Abe no Seimei who has basically become the last boss for this series. And Benio will have to “power of love” Rokuro back to normal. At the very least Rokuro deserved his plans going up in smoke. He tried to solve everything by himself and be the big darn hero through this. Well too bad, the plan wasn’t good enough. Now Benio and company will have to clean this up before Rokuro annihilates the world. It is going to be tough to avoid him killing a ton of people before Benio can take action. Let’s just see how things play out I guess.