Through its echoes of the past and its glimpses of the future, Rakugo Shinju has always fluctuated between grief and hope, melancholy and elation, as its characters and rakugo itself struggle to balance what they’ve been with who they want to be. This week sees us not just shifting between those emotions, but occupying them simultaneously, leading to some of the show’s most poignant moments to date. It’s an atmosphere that’s difficult to describe with words, although Yakumo brushes up against it when he looks through an old photo album, muttering with a wistful smile: “Natsukashii, ne…”

We’ll dig into that word, its meaning, and how it forms the heart of this episode as we go, but before we touch on those echoes from the past I figured we should give a nod to those glimpses of the future I also mentioned. As with much of Rakugo Shinju, Episode 8 is very much about the interplay between generations, both the relationships that form and how they grow and change over time. 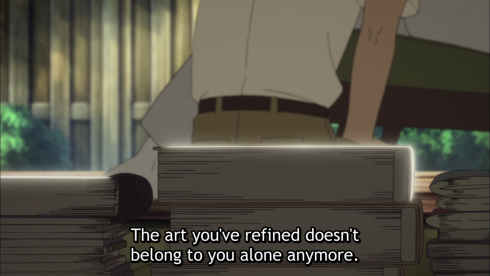 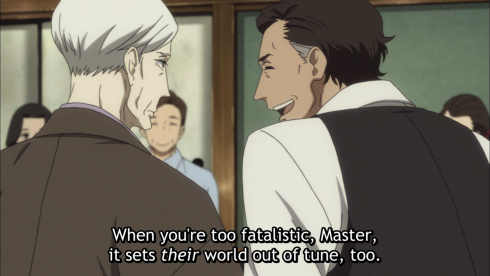 As a weary, visibly gaunt Yakumo (he looks older than Matsuda at this point) slowly recovers, Konatsu and Yotaro take on more responsibilities, balancing work with caretaker duties of their own, including new rakugo students. In recent weeks, everyone’s been reminding Yakumo that his life and work aren’t just his own, and the same is becoming very true of his adopted kids, too.

This subtle shift in roles is important on the professional side, of course, as it bodes well for rakugo’s future, but it’s most heartening on the personal side. While I’ve never framed it in these terms before, given Yakumo’s tendency towards emotional isolation, feelings of guilt, general lack of self-worth, and suicidal urges, I don’t think it’s a stretch to say that he suffers from chronic depression (definitely since the accident, but arguably before it as well). He’s kept it manageable largely through devoting himself to rakugo and looking after others–an emotional outlet and a raison d’etre, in essence–but it’s come and gone in waves throughout his life. 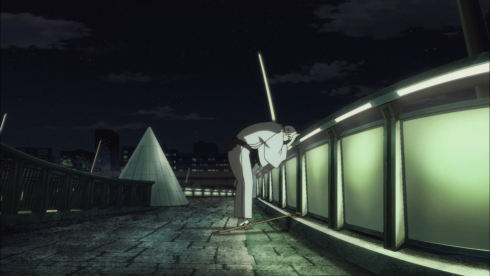 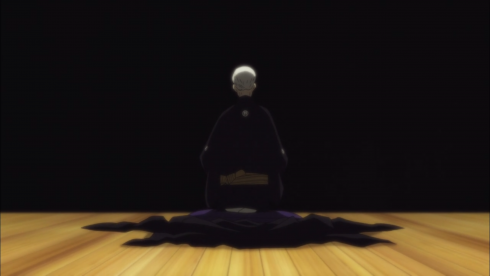 Now Yakumo has by-and-large lost those options, leaving him feeling more and more hopeless. “Empty,” as he said last week. Combine all that with the exhaustion and frustration that go hand-in-hand with recovering from an illness, and the unique terror of knowing that you probably won’t ever fully recover, and it’s no surprise that Yakumo makes plans to kill himself this week.

Rakugo Shinju does a remarkable job of capturing the combined anger and despair (and envy, maybe, given how he lashes out at Yotaro) that come from no longer being able to control your body the way you did before. It’s a feeling Yakumo knows all too well, given his childhood leg injury–and, just as that injury ended his dancing career, he’s convinced this illness has ended his rakugo career, too. Maybe that explains why he’s more lost than he’s been since those early episodes, and as desperately in need of someone to look after him a little the way he so often does for others.

(And, gosh, can I just pause to say how hard it is to watch a character I love struggle with something as natural as old age? It’s rare enough to have an anime about adults, never mind one that follows its protagonist from childhood to senior status (and likely through to his death, so ready your hearts for that episode, kiddos), so I am not properly prepared for this barrage of emotions.) 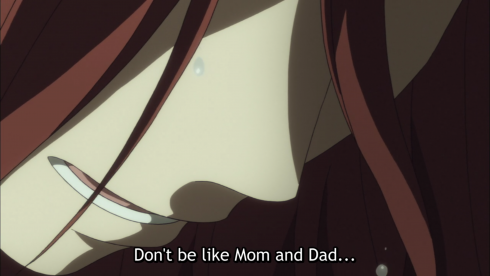 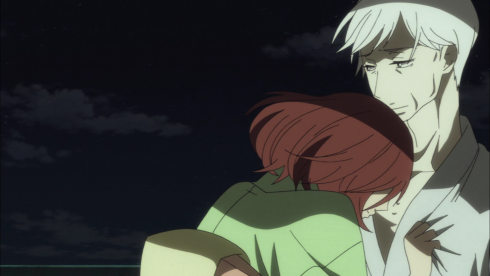 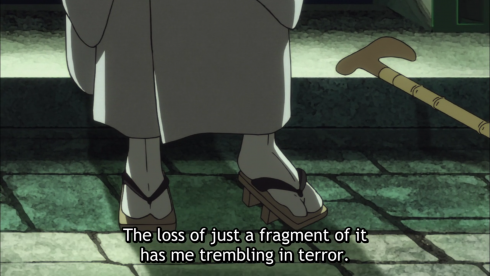 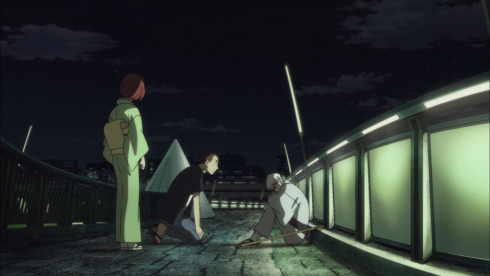 The good news is that, as raw and painful as that scene on the bridge is, it nevertheless carries an undercurrent of hope, because while Yakumo may feel isolated and helpless, he’s very much not alone. The perpetual caretaker has a pair of caretakers of his own, and they’re willing to yell, plead, and whatever else to keep him in the family even for just a little longer.

As always, Konatsu and Yotaro balance each other well, here, thanks to Konatsu’s perceptiveness and Yotaro’s optimism. Yotaro is initially oblivious to Yakumo’s despair, while Konatsu (once again) sees straight through his lies and confronts him on it. In her own harsh, roundabout way, she reminds him that she still needs him, refusing to let him “wipe away” the love that ties him to the world. Being needed has kept Yakumo going through his darkest moments, and it pulls him back from the brink this time, too.

Konatsu can be almost as pessimistic as Yakumo, though, so she doesn’t have much in the way of a long-term answer to that “terror” he describes. That’s where Yotaro comes in, frantically trying to help Yakumo find something to live for. He of course finds his answer in the world of rakugo, both in his own performances (“you can’t die until you hear my Inokori” is heavily implied in his sudden outburst on the bridge) and by encouraging Yakumo to find a way to perform even with his diminished voice. “Something good could come of it,” after all. Yotaro is working to fulfill his promise to Matsuda and “save” Yakumo, and everything he does this week is in service to that goal. 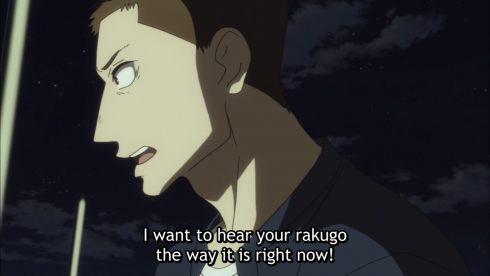 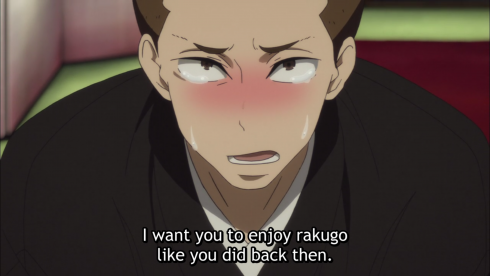 Yotaro seems to have decided that the best way to help is to recreate the past he glimpsed in that video—to find a way to take Yakumo back to a time when rakugo was something he did for fun as much as for self-actualization. That half-glimpsed past is hovering around every corner this week, starting with the photo albums and ending with Yotaro’s masterful mimicry of Sukeroku’s “Shibahama,” and it infuses the episode with that “natsukashii” tone I mentioned in the intro.

Natsukashii refers to the evocation of fond memories from a time now past, with an implied longing to experience that moment again. It doesn’t translate particularly well, but “nostalgia” comes close. It’s a good feeling, but also a sad one, because ultimately it’s an emotional echo, a memory of a feeling rather than the feeling itself. An experience can be remembered, maybe even reenacted, but never truly relived. To be natsukashii is to recognize that something precious has been lost. 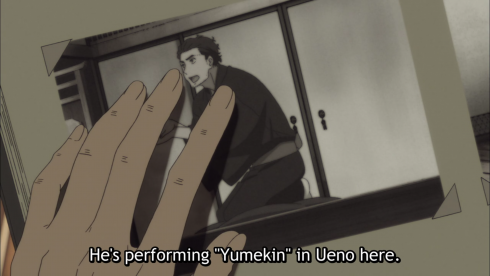 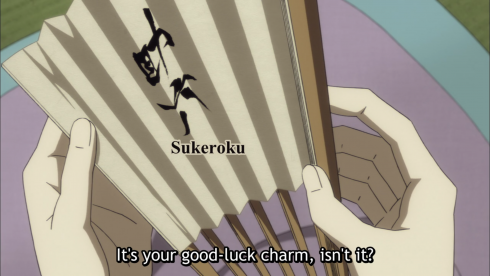 Rakugo Shinju embodies natsukashii this week, thanks in large part to its frequent use of echoes and mirrors: Shin singing the song from “Nozarashi”; present-day Yakumo looking at photos of himself as a young shin’uchi; Higuchi reiterating Konatsu’s words from last week when he says Yakumo’s rakugo belongs to more than just him; Yotaro unknowingly repeating Sukeroku’s offer for Kikuhiko to “take out” his frustrations on him; the references to the “busybody looking over your shoulder” who shifts from the “old” to the “young” (reflecting the shift in relationship between Yakumo and the kids, too); and of course Yotaro’s beat-for-beat reenactment of Sukeroku’s “Shibahama.”

Repetitions with variation. Similarities that, paradoxically, serve to remind us of what’s different. Through recurring dialogue, images, music, and especially the rakugo pieces we’ve come to associate with certain performers and scenes (that song from “Nozarashi” is like emotional kryptonite for me), Rakugo Shinju takes its characters’ memories and makes them our own. As Yakumo and Konatsu remember, so too does the audience. And if you’re anything like me, seeing Sukeroku briefly resurrected hit you in the heart as hard as it did them. Natsukashii, indeed. 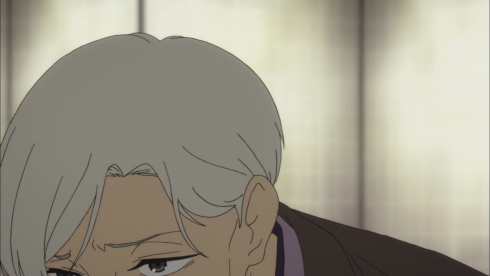 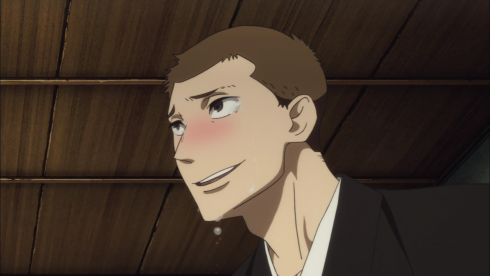 Much of this episode is a poignant contradiction, like Yotaro’s “Shibahama”: a convincing ghost, but a ghost nonetheless. Sukeroku can be evoked and embodied, but never returned. The past can be recorded, but never truly preserved. Time inevitably passes. Change inevitably occurs. That doesn’t have to be a bad thing, and it’s often a good thing. But we lose things along the way even so.

That, I think, is why the episode has to end with the boss being arrested, made to answer for crimes he committed for decades with impunity. It’s a final reminder, just in case Yotaro’s performance had fooled us, that things have irrevocably changed, that the world where Kikuhiko had fun doing rakugo no longer exists. Japan is not the same. Neither is rakugo. And neither is our protagonist. If we’re going to find a way forward, it can’t just be a repetition of the past. It has to have more nuance than that.

Rakugo Shinju, like Yakumo himself, exists in a kind of twilight this week, somewhere between past and present, between “saved” and “lost.” It’s hopeful and tragic, triumphant and melancholy. Yet through the paradoxes and contradictions, one constant remains: That “love that clings” to them. Yotaro and Konatsu are fighting like hell. I’m not sure what it means to “save” Yakumo at this point, but if anyone can find the answer, it’ll be those incredible kids of his. Thank goodness for busybodies looking over our shoulders, eh? 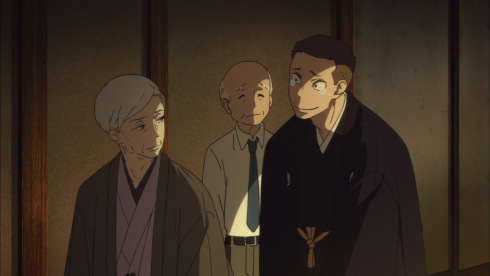 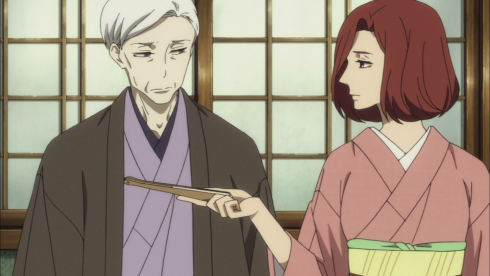