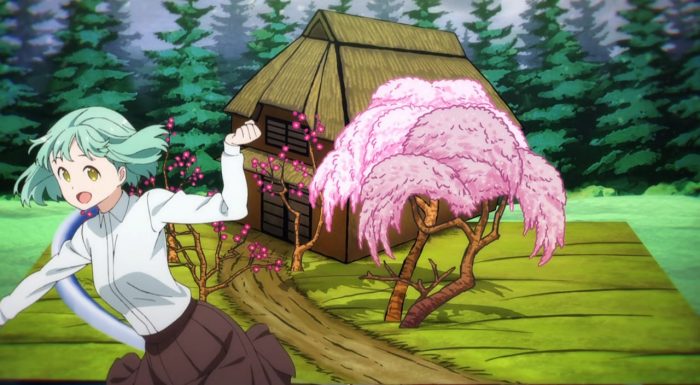 Have you seen the change to the OP? Yuki’s segment in the storybook is no longer a melancholy winter scene where she fades from pose to pose in sad isolation. She is smiling and alive now, and she changes the winter scene over to spring. Even the cutaway shot in the midst of it now has her laughing at her book, rather than the stoic/quizzical face she had before. Yuki is happy now. The fears that she thought had trapped her in that icy fate have been melted away, and the winter in her heart has blossomed into spring. Seeing this change reflected in the opening, basically written into the essence of the series itself, is really heartwarming. 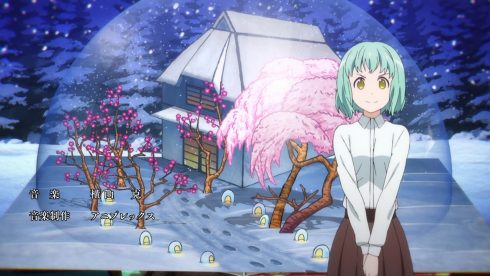 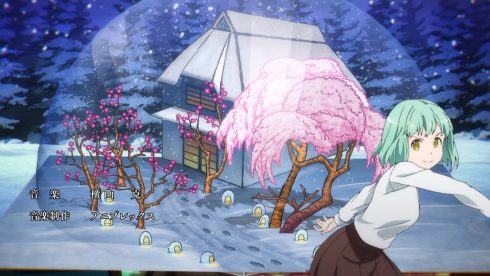 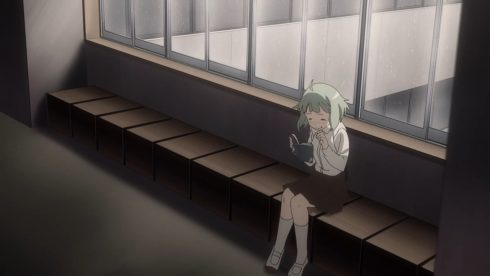 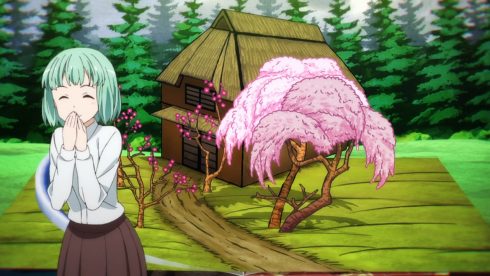 Of course, the opening isn’t all there is this week. Some stuff happens in the actual episode as well. Tetsuo makes a visit to Hikari and Himari’s home to meet their parents. It is interesting: their family seems to have gone to some lengths to make adjustments for Hikari. Perhaps more than she actually needs, although that isn’t necessarily something they could have judged at the time the decisions were made. But her father quit his job to stay home so that he could be available to watch over her, he and Himari both lightened their hair so Hikari’s natural blond hair doesn’t look so out of place… there just seems to be a certain air to most of the conversations there that the family is especially aware of Hikari’s status as a Demi, and that she may be treated as being a bit special because of it. Not in a bad way, but because there are still a lot of unknowns about Demis and they don’t know how she might be treated by other people or if something might happen to her that they don’t understand, I get the impression that they all have made sure to give her extra support to make sure she can get through everything all right. 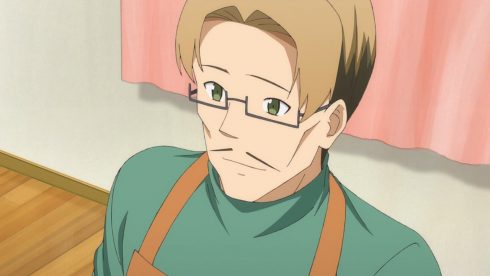 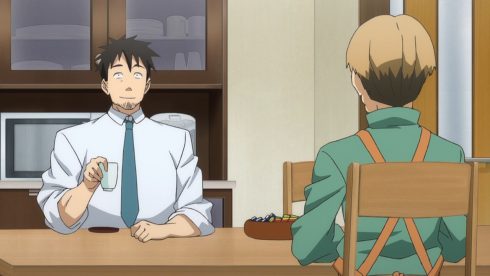 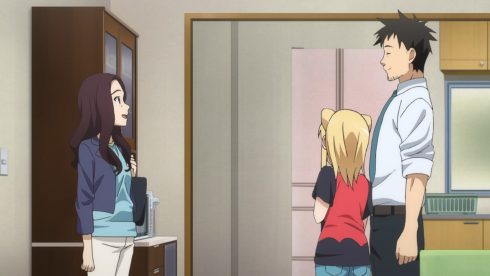 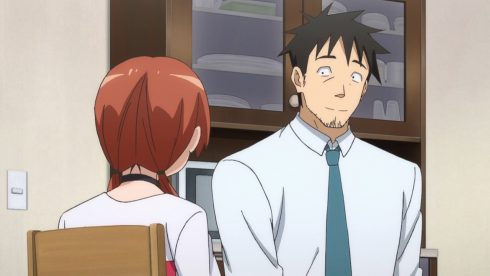 Of course, Himari lets Tetsuo know that it is fine to be strict with her. Perhaps she feels that Hikari gets coddled a bit too much at home. Certainly it wouldn’t hurt for Hikari to be a bit more diligent, both in her social life and in her schoolwork. Falling asleep with her head inside a refrigerator may be a bit much. On the other hand, while the sisters may quarrel and disagree about things, there is no sign of it being anything personal for either of them. They drop their argument immediately as soon as they’re called to dinner, without any lingering glances or resentment. The two of them even share the same favorite foods. They bicker with each other, but in the end that’s just a thing siblings do. Even though they disagree, even though each wishes the other could learn to be a bit more like herself, they still love each other. 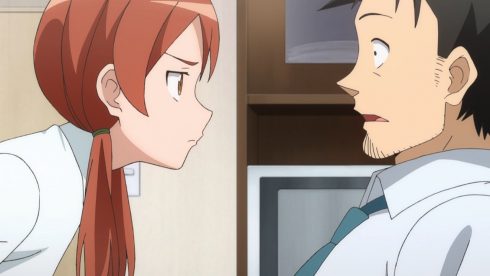 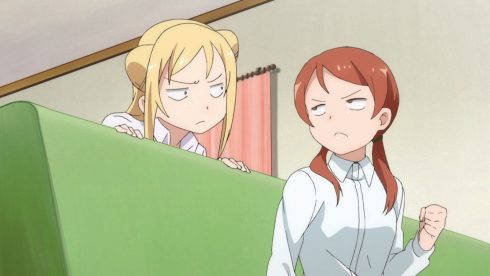 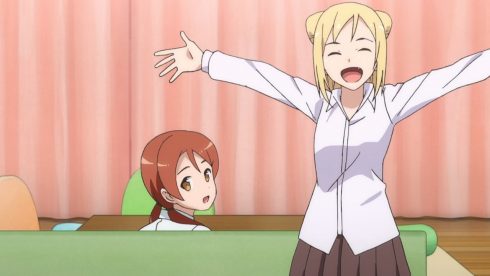 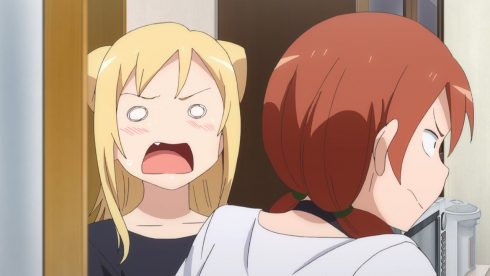 That was certainly evident in that segment at school later. I couldn’t help but cringe as Himari ran around the school looking for Hikari getting more worked up as she went. Even when I first read this chapter in the manga I cringed, because I was certain she was getting panicked over nothing, and just setting herself up for embarrassment. Our Demis tend to be pretty mild versions of the myths (or rather, the myths are wildly exaggerated versions of the Demis), so if something as physics-defying as Hikari being unable to appear in mirrors were actually true, I imagine we would have heard about it before now. And of course there truly is nothing to worry about in the end, aside from poor Himari’s pride. Hikari can see herself in mirrors just fine; the only reason she constantly tries to get Himari’s help with her hair is because she’s just that much of a slacker who doesn’t want to have to do it all herself. It’s a decent laugh, and a good way to defuse Himari’s fears of having unintentionally hurt her sister. And as embarrassing as her reaction may have been, I don’t think she’ll get teased too bad about it. Maybe a bit, but I suspect most of the school will see her concern for her sister as something praiseworthy. 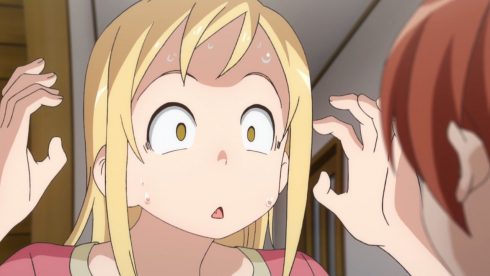 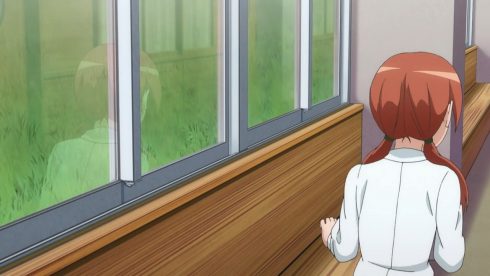 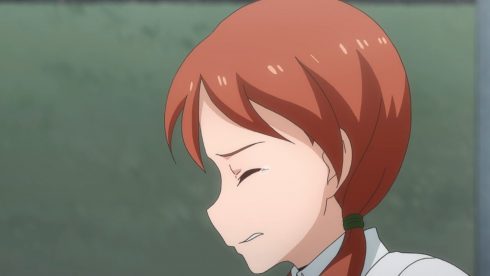 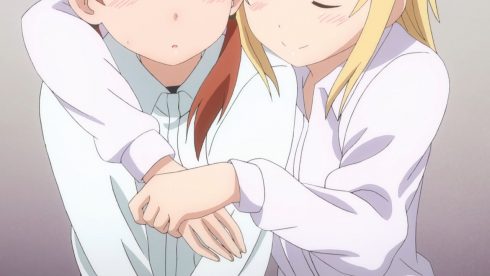 Satou-sensei and Tetsuo’s little interaction is basically a repeat of what’s come before, with the bonus of having the two of them able to be more open with each other now. But still, when she lets even a little bit of her charm slip it takes everything Tetsuo has to keep a straight face. Of course, Satou-sensei goes off, convinced that Tetsuo is immune to her charm (which is a good thing in her eyes, remember), while he is busy trying not to have a heart attack. Poor guy. 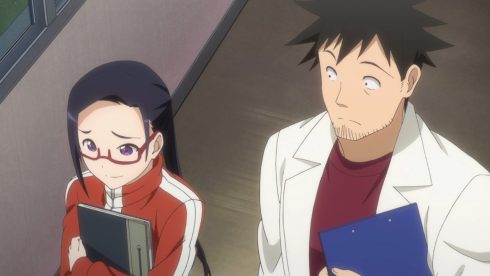 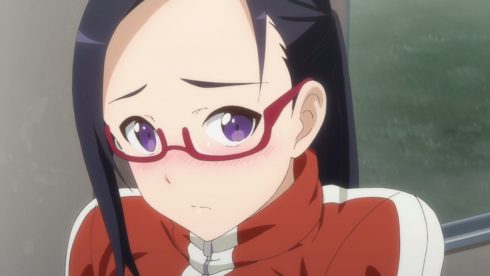 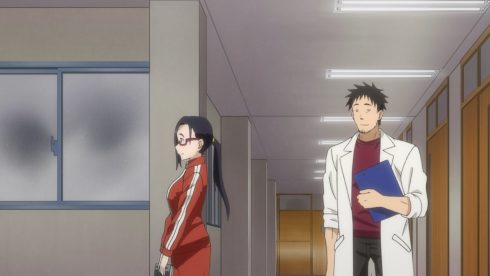 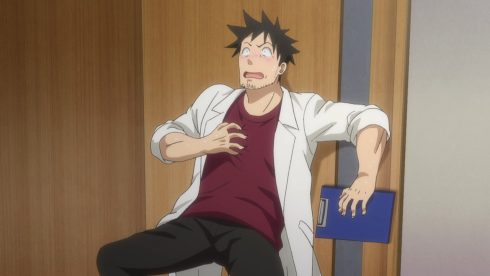 I do have to say that the final scene in the biology prep room feels a bit uncomfortable. Certainly Tetsuo is unsettled by Kyouko patting his head when she thinks he’s asleep, and Kyouko would undoubtedly be very embarrassed if she ever learned that he was awake at that point. She just acts on impulse. While this particular impulse is relatively harmless, it’s still one she probably should have checked. Putting the blanket over his shoulders under the assumption that he had fallen asleep was a good gesture, but she probably should have stopped there. Still, no harm done. And seeing that the parents of all three Demis have gotten in touch with each other and are coordinating with making sure that everything is all right with their kids just feels good. 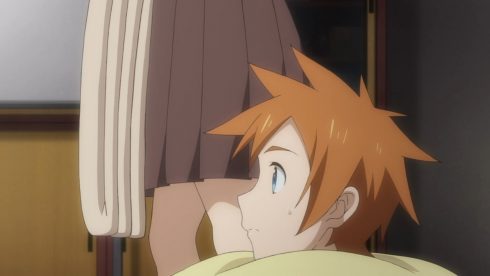 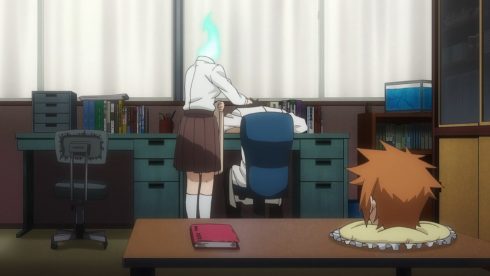 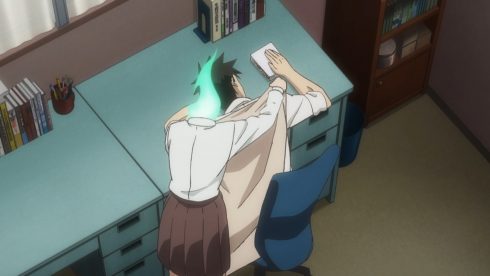 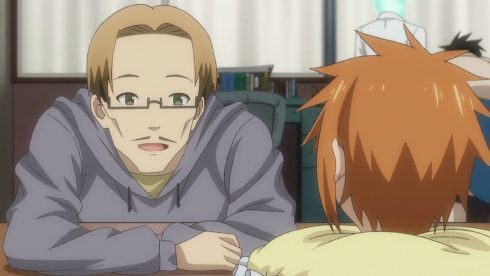 This episode was pretty good, although I can’t say I liked it quite as much as the previous one. But getting to see Yuki in the OP having practically transformed compared to how she used to be… that was worth every moment. Next episode looks to be heavily focused on Satou-sensei, and I hope they do it justice. It should be good if it’s handled right. 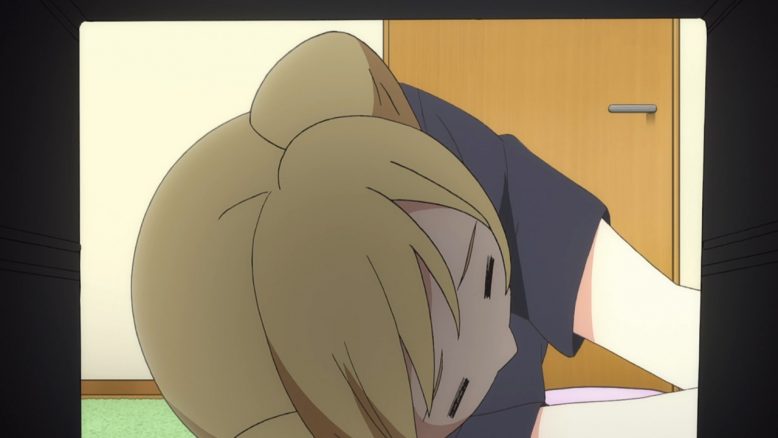 …Don’t try this at home, kids. Leaving aside the fact that it’s stupid, and kind of dangerous, and unhealthy, there’s the fact that it will drive your electricity bill through the roof. Which can also be stupid and dangerous and unhealthy, particularly if you’re a teenager whose parents get a bill that’s several times larger than it should have been.