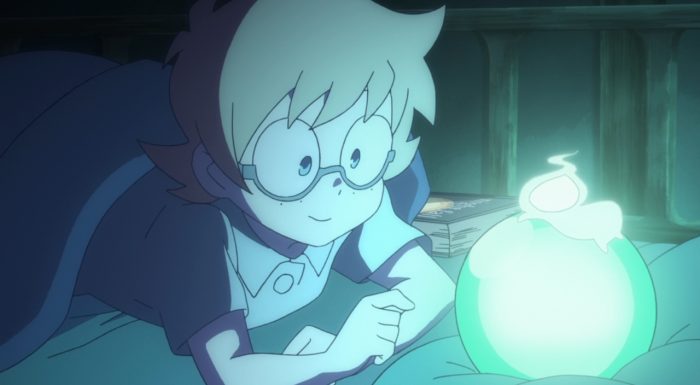 Well I can certainly say that there wasn’t an expectation for a character episode that focused on Lotte to go this route XD. From a simplistic point of view…Lotte is a Twilight fan. At least she is a fan of the crazy version of Twilight combined with a dozen other stories. But that isn’t really what the episode was focusing on. It was more about making some points about fandom, how people relate to their idols, and frankly internet culture. And on top of that it was also just a nice story that explores what drives Lotte as a character as she dragged Akko and Sucy along for the ride. This was a chance for Lotte to basically be Akko. For one episode she got to be the semi-crazy person dragging her friends along into something they weren’t as invested in. 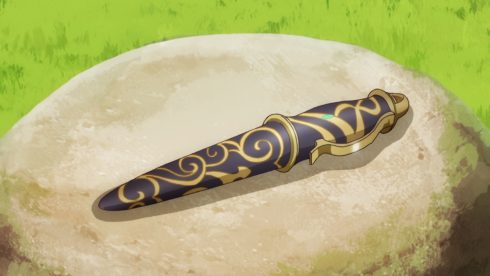 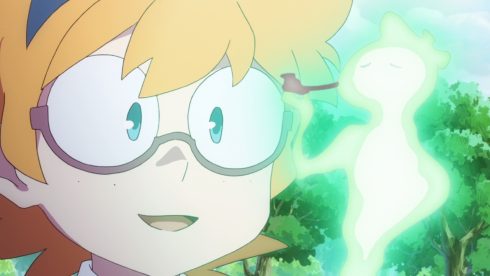 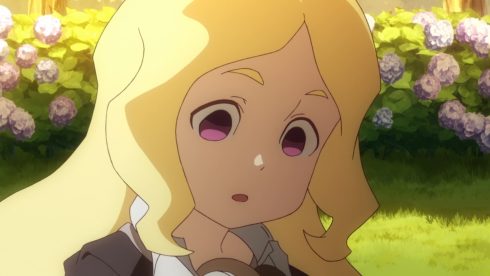 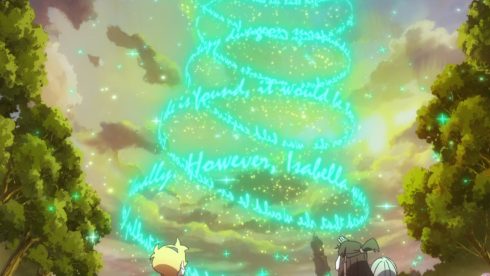 In a sense I can definitely feel for Annabel. The power of the vocal minority can be a real problem for anyone who has a public presence. If the majority didn’t like the books then they wouldn’t keep selling. Sometimes fanbases can be sheep and endure terrible things, but often sales will drop for franchises that mess up. But it is hard to remain confident when you look online and see mostly negative comments. There are a lot of cases of people just being far more motivated to comment or complain when things piss them off, then when they are satisfied. If everything is ok and comfortable then you just continue enjoying the things you like. And it’s easy for others to drag you into fan wars. So in that sense I can feel for Annabel going and seeing people just complaining and feeling like she was failing.

But, I’m also glad for Lotte’s efforts. Sure, part of it was that she preferred reading and discovering things than writing. But she also really liked what this Annabel was doing with the story. It is fair to say that those who truly understand the books so deeply are a vocal minority, but you can say the same about the ones complaining. The important thing is that Annabel realizes that people do love what she does and more importantly…she continues to love doing what she does. That is what matters the most, the passion of the person writing. If she stopped loving it then of course moving on would make sense. But she still loves to write. It’s just that this time she was depressed by negative reactions. 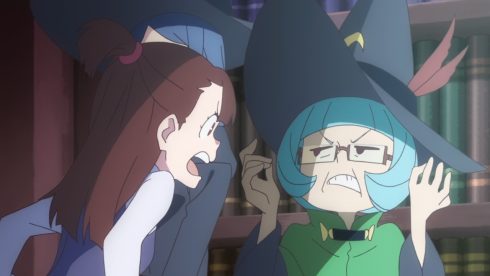 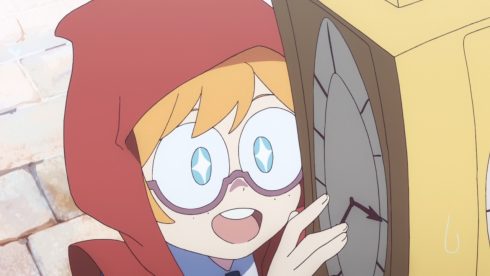 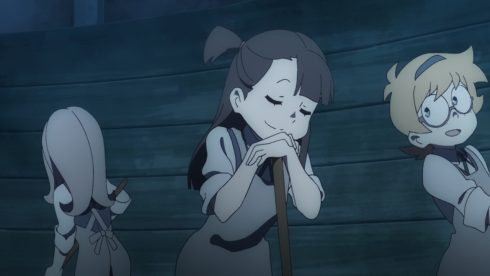 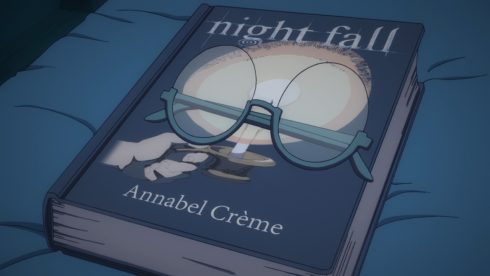 It’s kind of funny to be in Akko and Sucy’s shoes in this one. We obviously don’t know this “night fall” story outside that it sure sounds like Twilight. And frankly I never watched the movies or read the books so…I really can’t comment on it. We are just along for the ride as we all get to see where Lotte’s passions are. I can absolutely get though that she found something in these books. For her these books helped her out of a bad situation and from that point on she was just a pure fan. Most if not all of us have something we’re passionate about. Anyone reading this post is probably a fan of anime in general. Having those passions can give us direction, distraction, and let us sink into a world that makes our own problems feel a bit trivial.

What this episode did show is that there is more than one way to be a fan. Akko is the type of fan that wants to be the person she admires. Or at least she wants to follow the same path. Akko wants to perform those kinds of spells and probably would love to put on shows like Chariot. Lotte though prefers just cheering on the author and supporting a series she loves. The girl knows more about the stories than just about anyone does and yet she doesn’t want to write the story herself. Part of the reason is her desire to learn more and that writing would spoil it for her. But in the end she doesn’t want to be Annabel. Lotte just wants to be a fan and that’s ok. You can grow up fans of certain sports and yet never want to play them yourself. 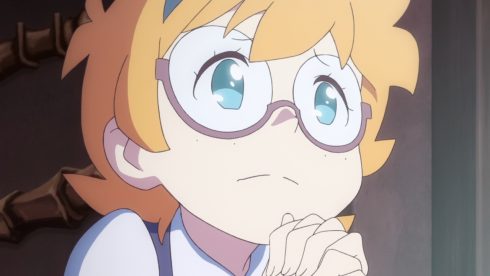 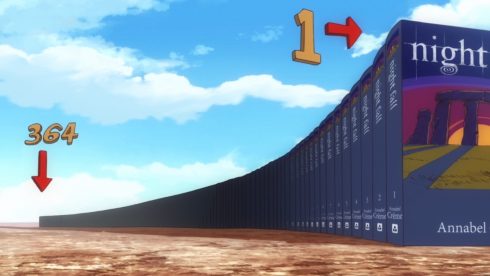 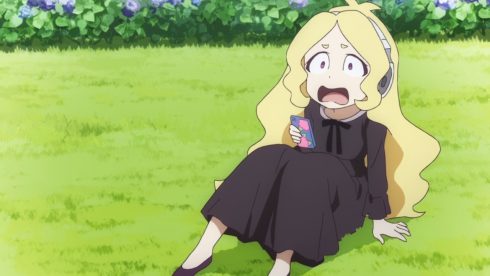 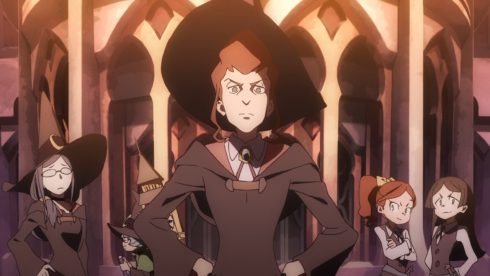 This episode had a lot of nice little chuckle worthy moments. I love them making it a safe bet that the penny pinching teacher…is Lotte’s online friend. That she also snuck out there to take part in the event. She likely went with that costume in part to conceal her identity and also because at her age…she’s probably been a fan since the series was still pretty fresh and new. This episode just showed how there are various levels of fandom; the casual fan, the fan that will cosplay, the fan that knows all the little details, and the closet fan. Even one of Diane’s lackeys is a fan of night fall, but she’s a closet fan that would never be able to admit to her friend that she’s a fan of it.

This wasn’t as fun an episode as last week. I think the race and Akko trying to learn to fly is something easy to sink into. This wasn’t a bad episode, but I didn’t love it either. I liked learning about Lotte and seeing the show tackle some interesting topics. But, in the end it wasn’t an episode that did a lot for me. I’m hoping we’ll get back to far more entertaining episodes. Maybe next week will be a Sucy episode? Or maybe we’ll get to see more of what the Shining Rod can do. I’m not sure, but will be watching and keeping an eye out.