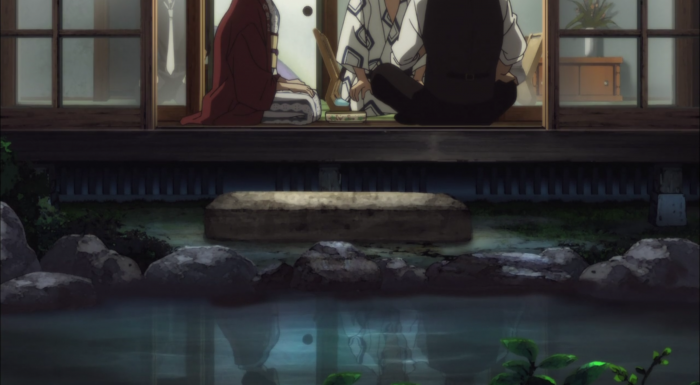 I’ve been unofficially calling this episode “The Declaration of Independence,” as it’s very much about the present looking the past in the eye and insisting it won’t be chained to it. Yotaro takes Yakumo’s advice to a literal extreme, facing his old life head-on. Konatsu slowly starts to loosen her hold on her parents and bond with her new family. And Yakumo allows himself to revive his adoptive brother for the sake of his adopted son. Real change, it turns out, can’t happen until you’ve acknowledged the past and connected yourself to the future, whether that’s via personal relationships or professional goals.

Yotaro’s once again at the center of our story, his actions sending ripples through the rest of the cast. He’s more secure thanks to Yakumo’s encouragement last week, but he’s still struggling to find his voice. The uncertainty of his bond with Konatsu and Li’l Shin weighs heavily on him, especially since they’re tied to the old life he’s been so desperate to leave behind. Yotaro needs confidence in himself, but to do that he needs to confront his past and make a promise to his future. Given that Rakugo Shinju is itself a tangle of timelines, full of ghosts and echoes and mirrors, it’s no surprise that Yotaro’s past and future fears are represented by the same man: the boss of his old gang. 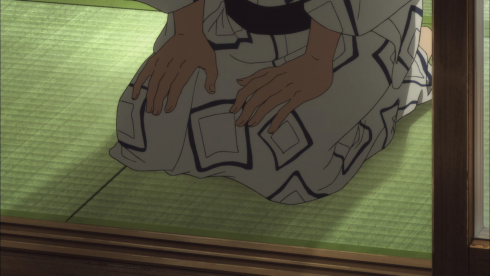 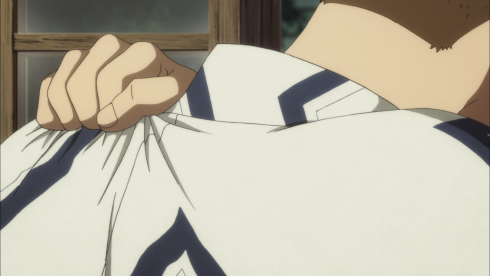 The confrontation scene between the two forms the main act of the episode, an extended scene that’s tight with tension thanks to an anxious soundtrack and a camera that keeps focusing on portions of bodies or scenery. We rarely see a full picture, especially of Yotaro or the boss–it’s all closeups on eyes or hands or shoulders–so it’s impossible to know exactly what Yotaro is feeling or how the boss is reacting to it. The always-magnificent Seki Tomokazu helps to build the tension as well, his extended backstory monologue matching the body language visuals to a T: First nervous and formal, then slowly shifting to a cheerful snap laced with long-suppressed anger, and finally culminating in a smooth confidence as he points out how far he’s come.

This is a survivor’s speech, a brazen “fuck you, I’m still standing” to the man who used him (and his father) and couldn’t even be bothered to remember that he did it. Yotaro talks about his change in position twice this week, and you can see him realizing it throughout this scene–that he really isn’t a powerless “lackey” anymore, but a “shun’ichi,” able to face others as their equal. Thanks to rakugo (and the inspiring power of stories he mentions later) and the family that took him in, he’s achieved the change he sought for so long. Yotaro’s no longer a helpless kid, but someone who can stand up for himself and the people he loves. 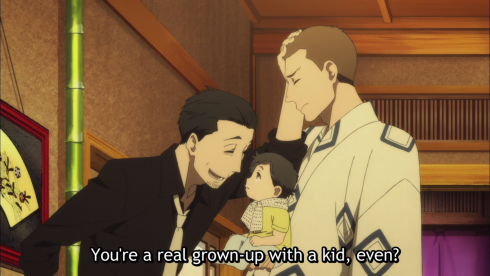 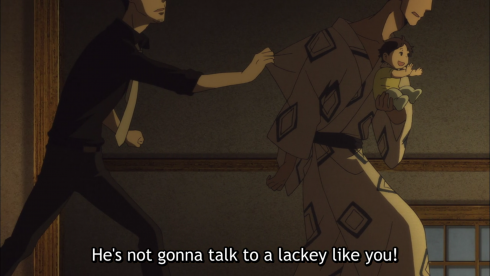 It’s this building realization, I think, that gives him the courage to not only call out the boss about his past, but challenge him about the future. Rakugo Shinju walks an impressive line with this scene, as it could have easily turned into a cliche White Knight moment where Yotaro tries to defend Konatsu (a woman who neither needs nor wants someone to fight her battles for her). Instead, this is entirely about what Yotaro needs other people to know about him: That he’s devoted to being Konatsu’s husband and Shin’s father, and that he isn’t someone who will be shoved aside if the boss ever suddenly decides to take an interest in his biological son.

It’s a tactless but adorable display of loyalty and love, really, and just one more example of Rakugo Shinju pushing for “family” as a unit of emotional support rather than just shared genetics. It’s also another example of the series challenging traditional ideas about what it means to “be a man.” Yotaro doesn’t demand anything of Konatsu except a level of honesty–he isn’t trying to “win” her or control her, but simply to be there for her and her son. Kikuhiko found his rakugo through his femininity. Yotaro finds his through his familial love. He may be louder and less elegant than his predecessor, but his caretaker impulse is just as strong. 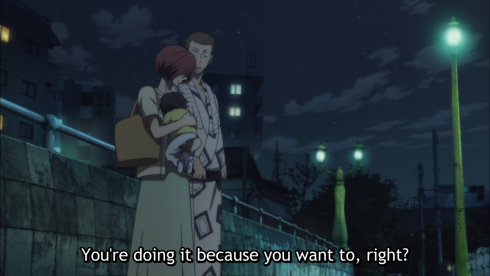 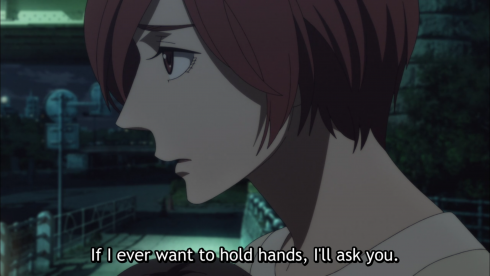 Konatsu, meanwhile, begins this episode still caught between generations (her parents and her son). She snaps at the Madame when she tries to compare her to her mother, but we later learn this is because Konatsu harbors her own fears that she’s a “slave to her blood” who’s living a “tragic life” just like Miyokichi did.

Konatsu is determined to control her own life, whether that’s something as major as having a child or as minor as holding hands with her husband. It’s an admirable quality, to be sure, but she’s also so afraid she’ll “lose herself in love” the way her mother did that she’s hesitant to get attached to or show affection for anyone. Her hostility towards Yotaro (and Yakumo, arguably) is as much a defense mechanism as Kikuhiko’s aloofness was, and just as likely to hurt her as it did him. 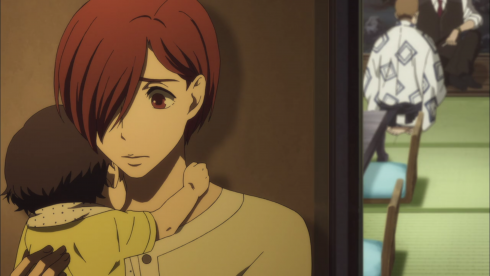 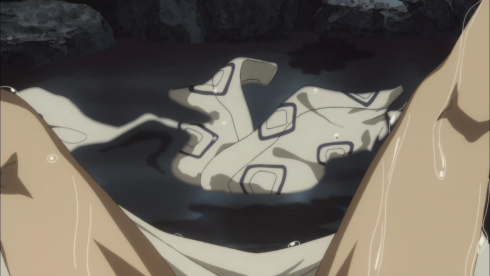 No one can be perfectly put-together and tough all the time, though. Seeing Yotaro get pushed into the pond–a horrifying callback to her parents’ drowning–triggers outright panic in Konatsu, and she cries openly for the first time, terrified that the boss is going to kill Yotaro. Just as Yotaro needed Yakumo to accept him last week, Konatsu needs to know there are people who will be there for her, too–to ask her what she wants (as Yotaro later does) and support her going forward. In her moment of fear, she not only realizes how much Yotaro means to her, but Yotaro also proves that he can be there for her, too.

And, slowly, Konatsu starts to let go of her past–her biological family and the idea that she’s doomed to tragedy–and to take hold of her future–her found family and the thought that maybe she can find that happiness the Madame wishes for her. She won’t hold Yotaro’s hand just yet (and he’s willing to wait until she asks, because they are a Healthy Couple Who Respects The Other’s Agency), but she does ask to hear his rakugo. Not an imitation of her father’s, but his. That’s a major step for both of them, and suggests they’re heading in a good direction, at least for now. 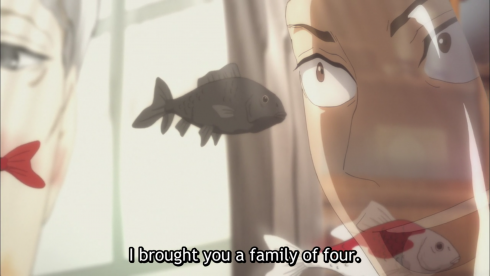 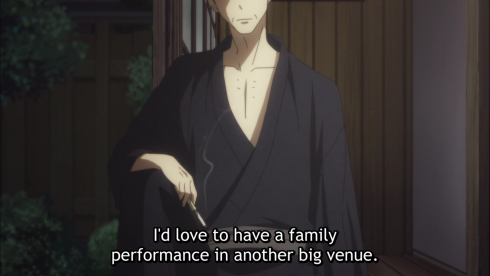 Our final scene between Yotaro and Yakumo connects our twin journeys of independence and family bonding to rakugo and gives me all kinds of emotions in the process (as scenes with Yakumo are wont to do these days). Yotaro continues to reach out to the family around him, first through his adorable goldfish gift and then through his request for a “family show.” Yakumo (reluctantly) reaches back by agreeing to the show, but he also pushes Yotaro to continue developing his newfound confidence and sense of self. To that end, Yotaro needs to learn a new piece–one outside of Yakumo’s own repertoire, so that his student has no choice but to step out of his master’s shadow.

While Yakumo has a long way to go in terms of grappling with his own past, I would argue that his decision to revive Sukeroku’s rakugo speaks to a willingness to interact with the most painful aspects of history in an intensely intimate way, and that this may ultimately be a good thing. Rakugo is both storytelling and acting–it’s not just narrating events, but embodying other people. In Season One, after years of silence, Yakumo turned his past into a narrative and became its storyteller. Here, he becomes its actor, shortening the emotional distance between his long-buried trauma and himself even further.

If rakugo and personal journeys are as closely connected as I think they are, then this moment of acute honesty (exhausting and agonizing as it is) may prove to be a major moment of catharsis. Yakumo not only agrees to the family show, but agrees to teach his adoptive son a piece using every tool at his disposal, even the ones he’s refused to touch for decades. Perhaps that speaks to gradual growth. If nothing else, it certainly speaks to Yakumo’s love for Yotaro–and for a man who claimed to have lost himself entirely to his professional persona, that kind of affection is a minor miracle all on its own. 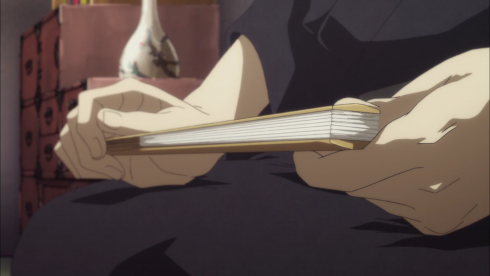 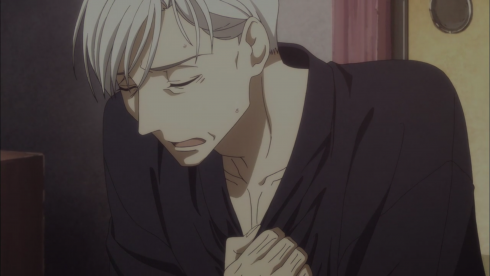