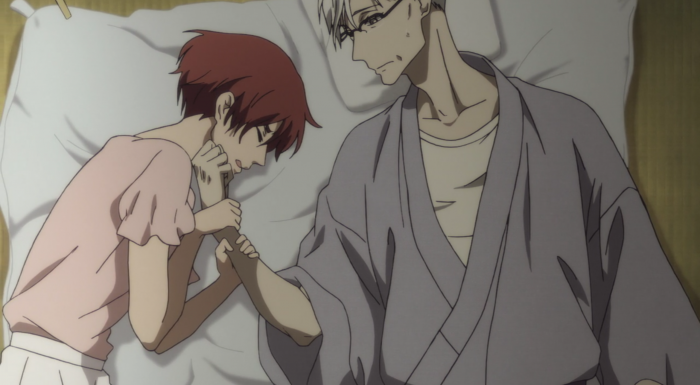 If Season 2’s premiere felt like a rebirth, this episode reminds us that karma still carries from one reincarnation to the next. The weight of the past clings like a–well, like a tattoo to the backs of all of our characters, reappearing through old faces, names, memories, and tales. And our new writer friend Higuchi is bound and determined to document all of it, even if he has to withstand the full-force of a Yakumo stink-eye to do it.

There’s a somewhat contradictory tension at play here between the world within rakugo and the world outside of it. The rakugo society is static and unchanging, separate from everything else; nothing exists before or after you’re accepted into it. Meanwhile, the world outside of rakugo is perpetually in flux and intertwined with everything around it; past, present, and future connect and tangle and influence one another. It’s not that rakugo is stuck in the past, exactly (because it doesn’t care about Yotaro’s past), but rather that it’s stuck in its own private bubble, disconnected from everything else. This means that sometimes rakugo can seem like a place of renewal for individuals even if it seems stagnant to society at large, and that contradiction is at the heart of our conflicts this week. 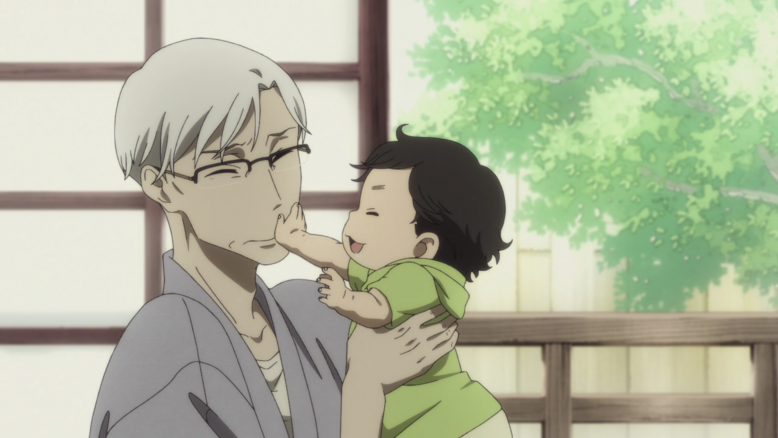 But before we get into all the analytical and emotional stuff, please enjoy The Cutest Screenshot, for ’tis The Cutest.

Rakugo’s isolated nature appeals to Yotaro, who wants to sever himself from his past and so enters the rakugo world, taking on a new name, career, and even family. Within the rakugo bubble, he’s able to start over. The world outside isn’t so forgetful, though, and reporters dig up his former life as a criminal. I’d assumed Yotaro was just the kind of person who focused on the future, but it turns out he’s as bothered by the past as Yakumo and Konatsu are. His frantic desire for change and rebirth come at least partly from a deep-seated shame about his history. (People are constantly warning Yotaro not to “disgrace” his master, and every time they say it you can see another weight fall on his shoulders.)

But if you can’t acknowledge every part of yourself–even the parts you don’t like–then how can you ever find your own identity and voice? That’s Yotaro’s dilemma this week, both on stage and off of it. He wants to please others, so he’s trying desperately to be someone else, whether that’s Sukeroku or sometimes Yakumo himself (the way Yotaro swallows hard and immediately drops his female character’s falsetto is a marvelous bit of subtle character work–you can practically hear him thinking “Oh crap, my master’s gonna yell at me!”). Everyone can tell that Yotaro’s a patchwork of other performers instead of his own unique voice, and it’s losing him fans and confidence alike. 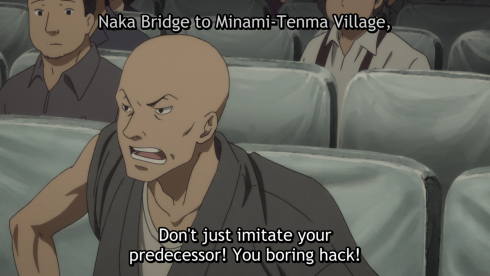 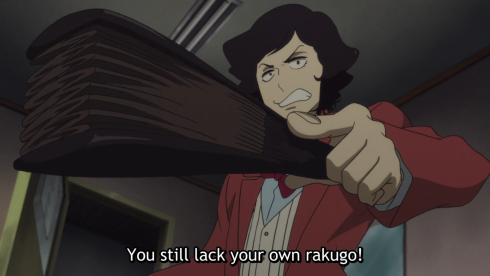 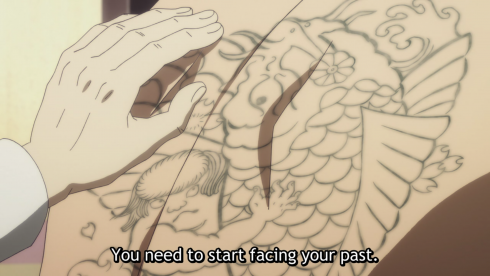 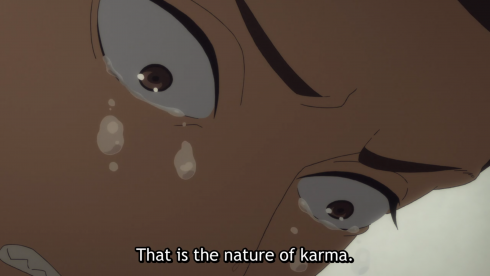 Yakumo is all too familiar with the frustration that comes from pretending to be someone else. He denied his own femininity for years before Sukeroku helped him see that he could be a great performer by–as Yakumo tells Yotaro–showing his true self to the world instead of trying to hide away. (But I already wrote a whole essay about that, so no need to go into detail here.) Yakumo may be unhealthily obsessed with the past, but that doesn’t make his advice to Yotaro any less meaningful, nor his wholehearted acceptance of his apprentice any less moving. Even now, in his own grumpy way, he’s still doing his best to take care of others when they’re at their weakest.

His quiet moments attempting to console Konatsu are just as poignant (or as it says in my oh-so-professional notes, THE SADDEST), and just as haunted by ghosts as his conversation with Yotaro. The difference is that Yotaro needs to be encouraged to embrace his past, while Yakumo and Konatsu badly need to loosen the grasp on theirs. Like Konatsu’s death grip on Yakumo’s arm, neither is willing to let go of the guilt and bitterness they felt after Sukeroku’s death. They both refuse to forgive Yakumo. And so they live on, trapped in their own bubble just like rakugo, static and unchanging and suffering all the more for it. 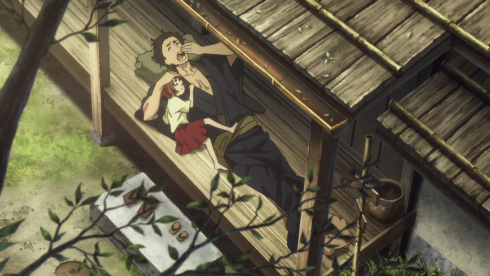 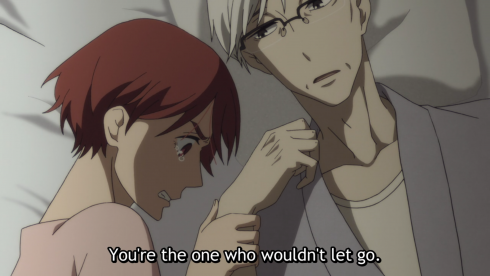 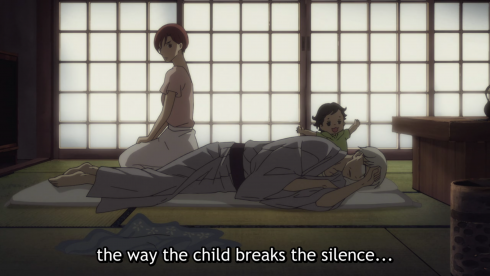 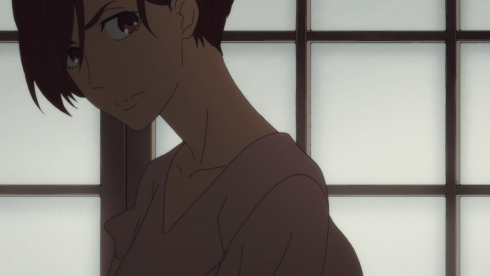 Still, time marches on around them both, just as it does around rakugo. There’s something faintly surreal about this season, as the world of rakugo (including Yakumo’s home) is so steeped in traditional Japanese culture, clothing, and architecture that it often doesn’t feel like much time has passed since the first season. The modern world is kept partly at bay, invading almost solely through the audience and the sudden appearance of rakugo outsiders–through TV newscasters, through a kid playing a Game Boy, and especially through the way everyone interacts with that rakugo bubble.

Yotaro’s performance this week is downright painful to watch, and while that’s partly because he’s so insecure, trying way too hard to get a laugh, it’s largely because there’s just no connection between the audience and the story anymore. We’re at the end of the 1980s now, a time of economic prosperity brought about through political reforms, new technologies, and industrial globalization. Over a century of steady modernization (or “westernization,” debatably) had eroded a lot of traditional habits and ideals, and the specter of World War II (a one-two punch of civilian suffering at home and political atrocities abroad) sure wasn’t making folks enthusiastic about embracing their history. To generalize somewhat, the Japanese people were a little like Yotaro: Speeding optimistically towards the future in part out of a need to escape the past. 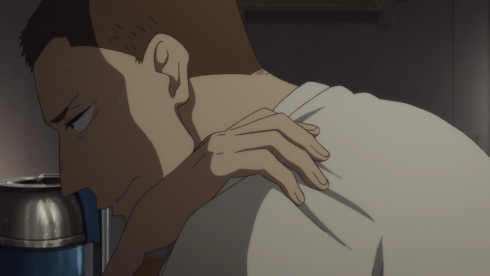 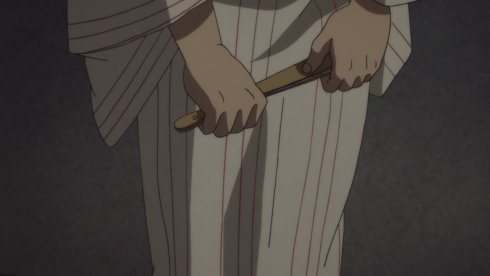 It’s into this environment that Yotaro arrives, telling a story packed with references and practices that aren’t just traditional, but almost embarrassingly archaic: brothels, brocade cloth, spirit possessions, and so on. I’m pretty sure Rakugo Shinju picked the least relatable piece they could find in order to highlight the stark contrast between the world of the audience and the world of the rakugo tale. The audience laughs exactly twice, and neither time is all that enthusiastic.

Yakumo says that rakugo is about empathy, but if a story is dramatically different from its audience’s experiences, then it’s nigh impossible to create that empathy, especially within a few short minutes, and especially when you’re trying to provoke laughter. The rakugo bubble floats along, but the world is moving at its own pace. Rakugo is being left behind, and dying because of it. 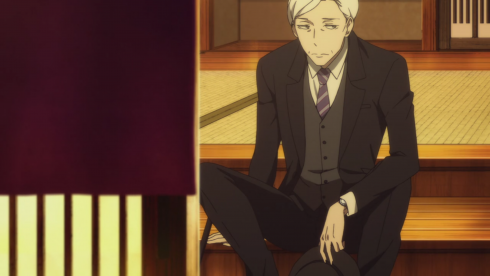 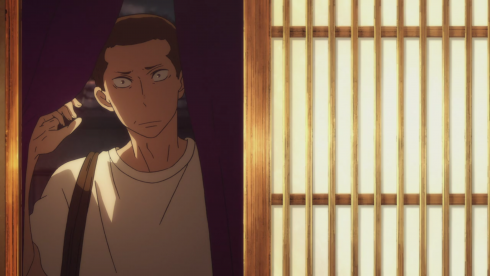 So here we are: Yotaro and modern Japan zooming towards the future so they don’t have to think about the past; Yakumo and the world of rakugo stagnating in tradition; and Konatsu somewhere in the middle, looking to her son’s future but clinging tightly to her father’s memory. Yet as anxious as this episode is, there’s still an undercurrent of hope here that we didn’t have last season. Some of it comes from Yotaro, whose relationship with both Yakumo and Konatsu is much more openly warm than the relationships of the past. But a lot of it comes from that world outside of rakugo, and especially from that next generation.

Just as Yakumo continues to live on because the younger generation needs him (first when he took care of Konatsu and now when Konatsu wants her son to hear his rakugo), our writer friend Higuchi is bound and determined to preserve rakugo’s history (even the painful parts) and carve out a future path for it. Our characters will need to find that same delicate, tricky balance in their own lives if they ever wish to find happiness (or at least peace), both in their own lives and with each other. 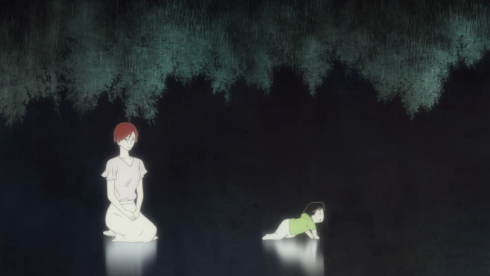 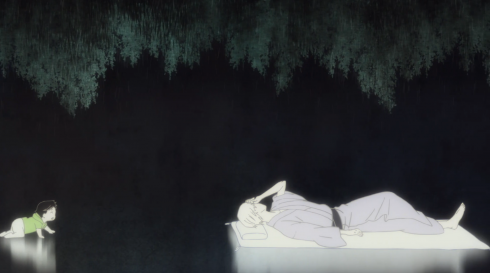