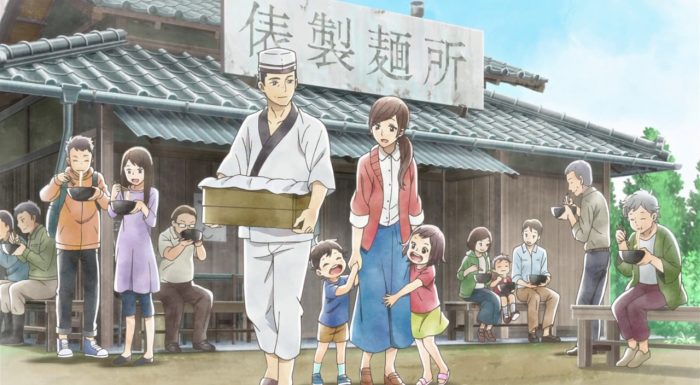 This is one of the series that I had been most anticipating for the Fall season, and, truth be told, if I had not already planned to blog Show by Rock!! 2 I would probably have chosen this series.  There are so many things about it that were as if deliberately suited to my taste, including animation style, story elements, setting the story takes place in, and so on. In my Fall 2016 Preview one of the things I thought characterized the now past season was the focus on was “shinto based themes” … by this I meant in part things like old Japanese folklore and “mythological creatures”. Natsume Yuujinchou Go is a good example of this, but this one is too, with one of the main characters being a child tanuki. The official title in Japanese of the still ongoing manga appears to literally translate to “The Golden Furball of Udon Country”, and all the positive connotations associated with the word “furball” in English are definitely present in the series. 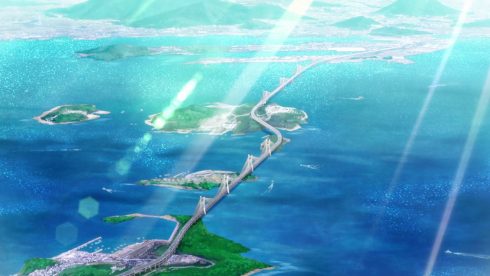 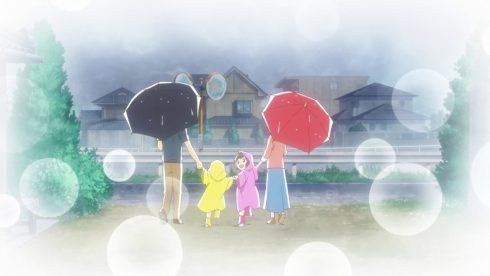 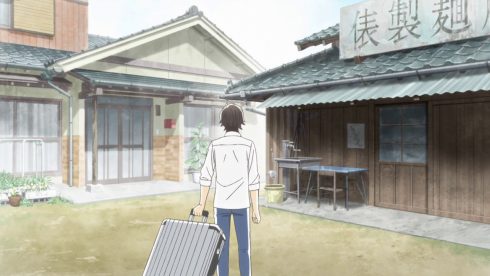 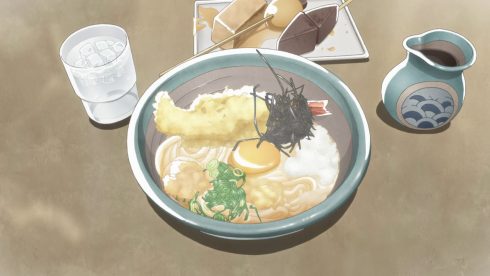 The summary of the story itself seems straightforward at first and given in my “first look post” on the series, which I will borrow from for a fair bit of the summary and description of the series: a thirty year old man who has left the home town he grew up in to go to “the big city” (aka Tokyo) and made his living as a web designer returns home after his father dies to help put the house and its belongings in order. As so often happens with the death of a close one or a family member, one of the (very normal and natural) results it brings about in the mind and heart of those close to them is the mode of “remembrance” in some way, shape or form.

And not only just “remembering things”, but an accompanying mode assessment and evaluation, often on several levels. Curiously this response something that seems biologically hardwired in us, and the main character, whose name is Tawara Souta, falls into the same boat. His return home has him mulling over his memories of his parents (his mother unfortunately died when he was still a young child), his time growing up in the sleepy, backwater town, and most importantly the person and legacy of his father, with whom he had clashed before leaving for Tokyo. 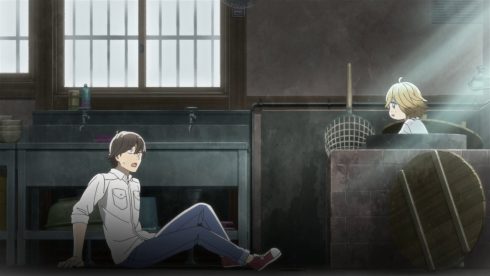 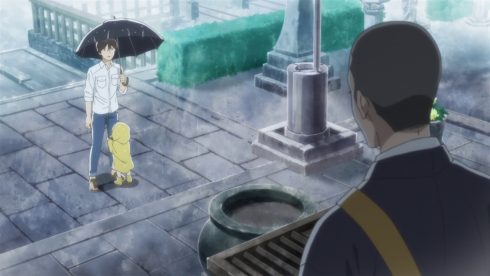 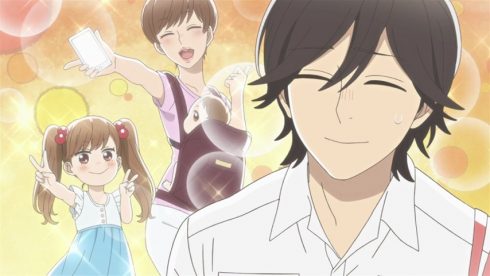 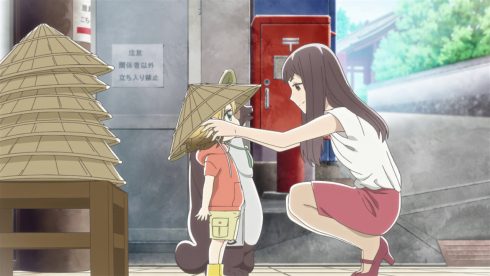 I never really caught if the town featured in the series was directly mentioned (it could be Sanuki?) – we do know that the island of Shodoshima appeared to be “on the other shore”; but the prefecture is clearly named: it is Kagawa. Kagawa has the distinction not only of being the smallest of the prefectures in Japan, but it is located right next to the incredibly lovely Seto Inland Sea (fans of Tamayura and Kamichu take note!) and is well known for it’s Udon.

In fact, Souta’s father was a highly respected local Udon chef, and ran a restaurant in the front portion of their house, it seems. We can almost feel the slow percolation of memories, impressions and things he has forgotten (or ignored?) coming to the surface throughout all the episodes, all presented to the viewers through the visual prism of the lovely, soft, almost watercolorish color palette of the art and animation – this series was indeed visually quite lovely! 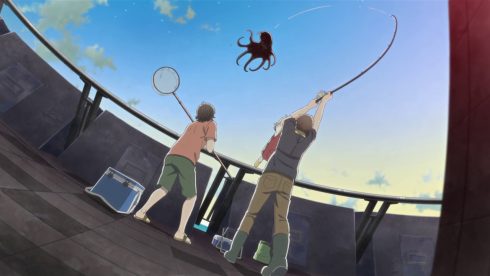 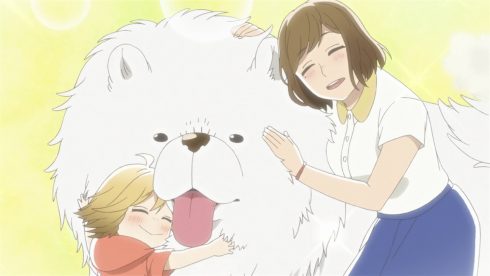 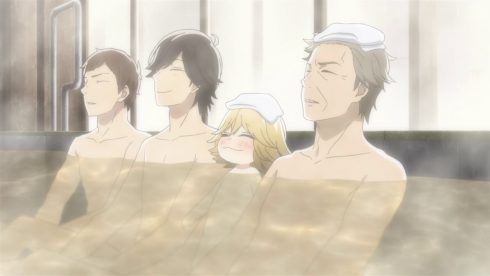 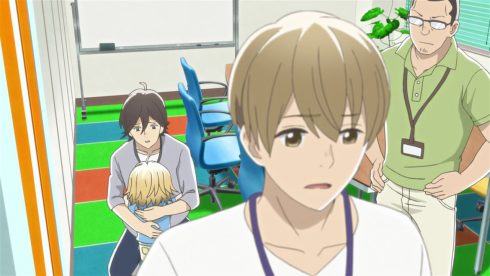 The story begins with Souta visiting the now empty home of his family and discovers in one of the “old school” storage container pots a sleeping child. This child slowly befriends the … well … one might almost say “quietly empty” Souta, a child who to his great surprise he finds out is actually a shapeshifting tanuki straight out of the old folklore tales. The child, who gets nicknamed “Poko” (with a tiny nod to the Ghibli movie, perhaps?), begins to slowly worm it’s way into Souta’s affections before unexpectedly (for Souta) transforming into its racoon’ish form.

Souta’s natural process of re-evaluation becomes quickly “seasoned” with the impulse to “give out” in an unselfish way to little Poko as if he were a parent (and it is quite true that the impulse of the parents to support, protect and care for their children can be a wonderful method of maturation). What this does is puts Souta in the position of a “father”, and colors his recollections with a deeper insight. And interestingly as the story goes on Poko has a similar positive effect on Souta’s older sister as well, allowing her to take another step forward in her emotional growth, but also one brought about with a gentle hand (paw?) in the light of remembering her parents after her father’s death. 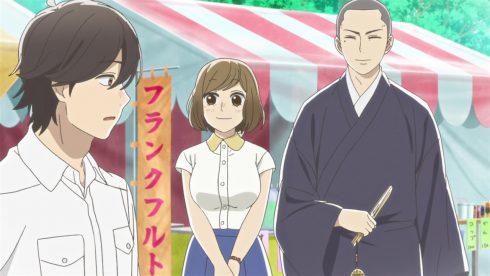 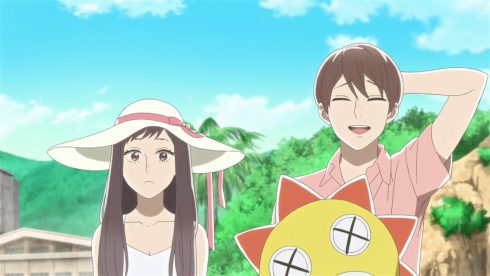 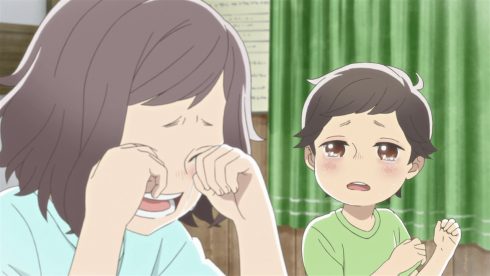 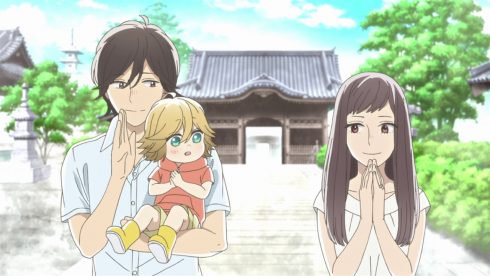 Undoubtedly one of the strongest aspects of this series is the writing; I felt it was TOP NOTCH, perhaps some of the best I have encountered all year. By the time the last episode was ended one clearly saw that there was not only very little time and content that was “wasted” or “left dangling”, but that the story itself was all very, very purposeful. In retrospect it was an anime-original ending (the manga is still ongoing, if you remember), and one can only wish that all anime original endings were as effective as this one! The gentle, slow, careful pace of the series should not lull viewers into the idea that this is only another ‘Dem feels!’ series (a phrase which frankly irritates me, is way oversimplifies and I would even say reductionist).

No. This is a series that is unexpectedly accurate and even penetrating in its portrayal of human emotions, struggles and working through painful memories and experiences. It is unexpectedly multi-perspectived, mature and shows human interactions on many levels (adults to adult, adults to children, children to children, both when grieving and when not in such a process) with a keenness, insight and even power that is rare these days. Anyone who has gone through the process of grieving over the loss of a loved member of the family with any kind of attempt to “make sense” of what happened and what is happening inside oneself will (I feel) immediately be able to relate to experiences of the Tawara siblings. 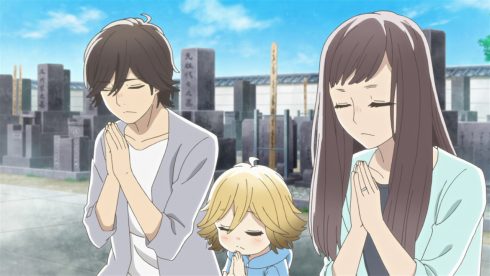 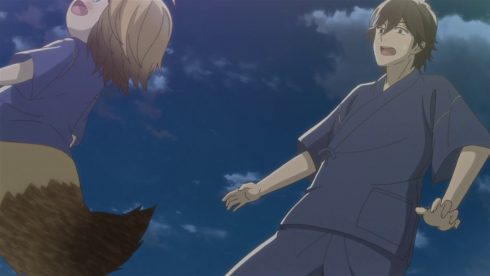 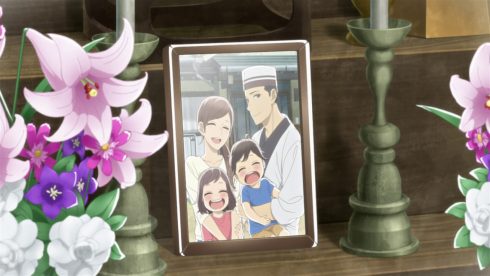 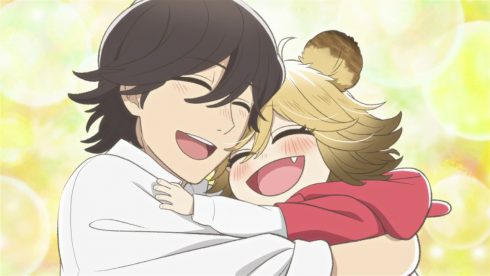 If there were an aspect of the series I would have to pick out and dislike it would probably be the choice for the OP. Frankly it did not work for me. Fortunately this was made up for by a very appropriate ED and a nicely chosen OST. The Gaogao-chan shorts at the ends of the episodes were at first not quite my cup of tea either, but I came to realize soon that they were both commenting on the content of the episodes from different angles and even at times shedding light on their content. As the episodes went by I soon realized that Gaogao-chan’s inclusion was also not just a random thing but an important part of the story.

For me this was the best series of the Fall 2016 season, and in a season with such stiff competition from series like Fune wo Amu and Natsume Yuujinchou Go that is high praise indeed in my book. It has been a while since I handed out an A+ ranking to a series (I think the last one was Death Parade?) but to me this is definitely another series that deserves such a rating and also deserves more attention and even more careful viewing and respect – there was a lot more going on in the series, and while I am doubtful it will ever get a sequel I am more than happy to have had the experience of seeing such a lovely, simple, homespun work of creativity as this one.

in Reviews,Udon no Kuni no Kiniro Kemari