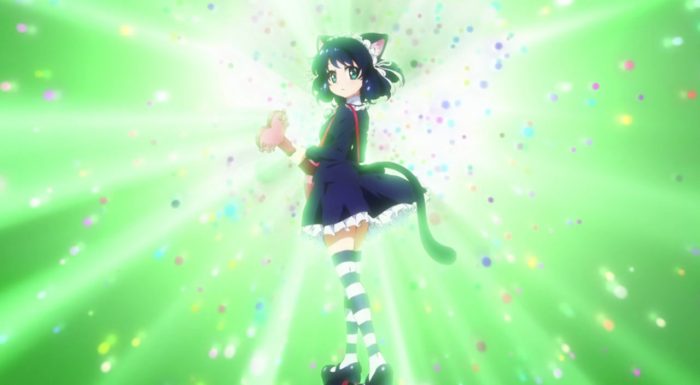 Hmm … well, everything worked out the way I expected it to, which in and of itself is plenty fine, of course, but when the story came to its final closing minutes I found myself wondering why the MC even needed to be dragged into Sound World in the first place? It took me a few minutes to streamline the story presented in the season itself into order before I was able to rediscover the answer, and I found myself wondering why the question should arise at all when I realized something. Somewhere in me I had made the assumption, and had made the assumption from the get-go, that the second season of Show by Rock would end in a similar way as season 1 did. And I think in doing so I may have done a disservice to what the series actually was trying to do in the first place. 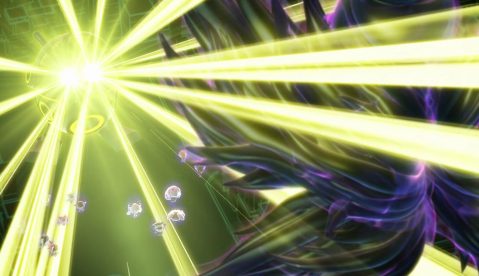 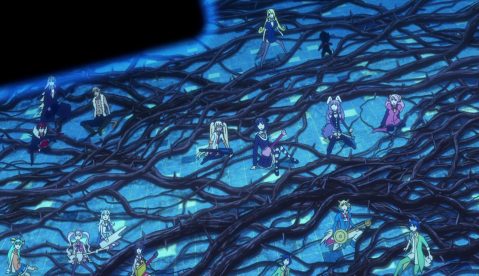 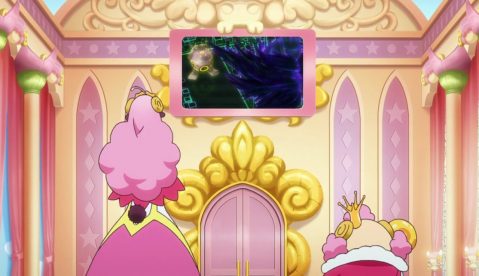 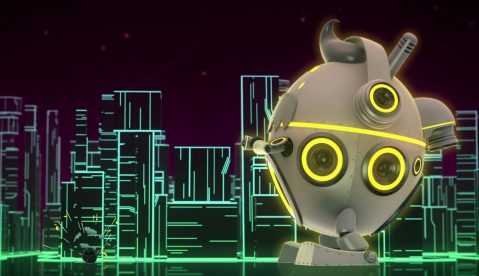 As expected the finale of the season involved the “final showdown” between Victorious and … well … the entire mini-army gathered against her. Maple Shachou initially “saves the day” by forcibly teleporting all the bands OUT of the dark dimension before Victorious is able to do any more damage to them. After attempting to take further action against her with his “Scarlet Buster Cosmo Crusher Grateful Rocking Screw Punch”, it fails spectacularly (due to technical malfunction – Maple has never had a particularly strong “luck” score) and just as it looks like Maple is doomed who should fly onto the scene but Darudayu (YAY! Woohoo!) with the Melodisian Almaz in tow! Which means … ayup … time to clean Victorious’ clock! 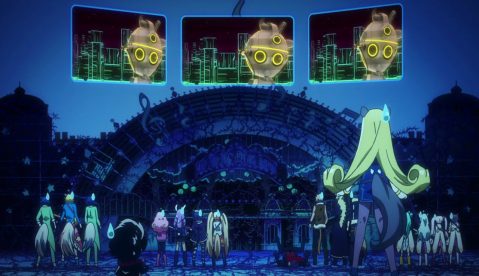 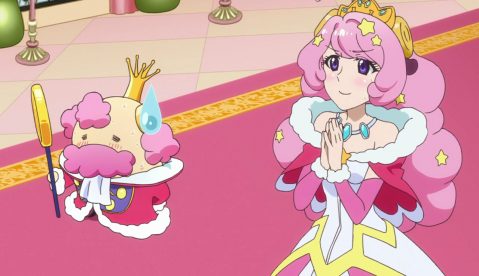 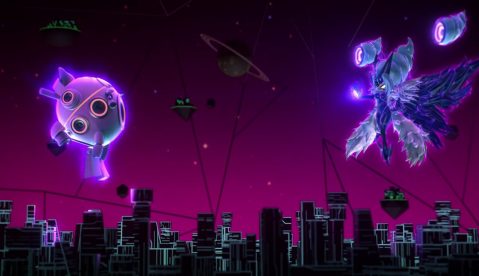 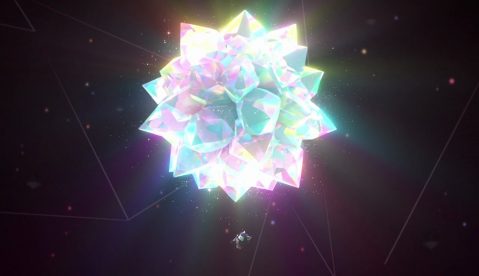 And sure enough Grateful King “re-possesses” Strawberry Heart and everyone begins to sing the song all of them had composed together as a collective effort (well, with the exception of Tsurezurenaru Ayatsuri Mugenan who were away obtaining the Melodisian Almaz, of course) and pour their energy into the Almaz to try and defeat the Queen of Darkness. She actually offers quite a bit of resistance, and right when she seems to push away the Almaz Maple in his mecha arrives and hurls it into her, delivering the finishing blow, but apparently getting himself killed in the process! There was one scene where it looked like he had bit the dust where they showed him with angel wings and a white outfit that loosely reminded me of Cyan’s white goth-loli form from season one that both disturbed me and made me chuckle. 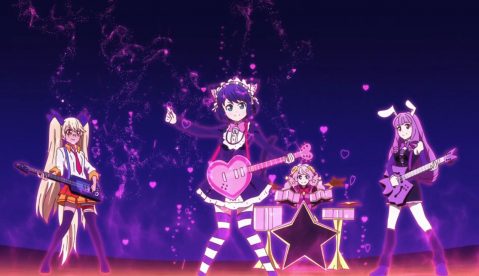 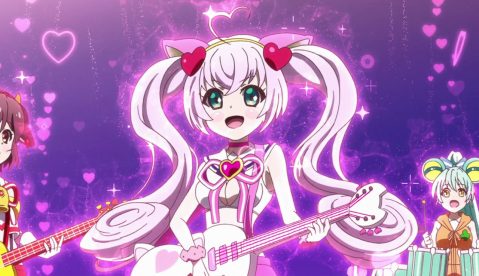 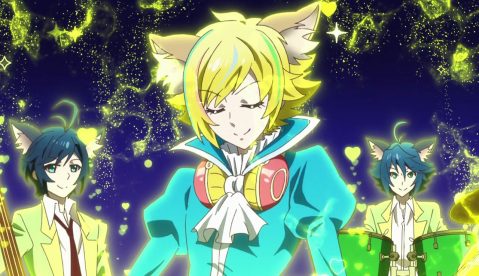 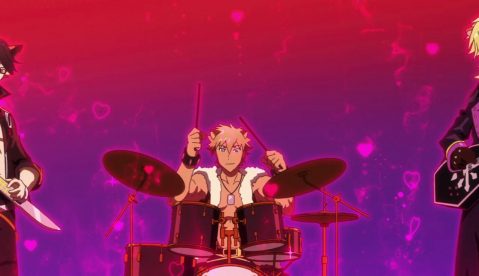 Unsurprisingly after Victorious gets flooded with “positive energy” via the Almaz she begins to remember the things she has always held close to her heart before the betrayal of her best friend (a pity that they did not touch on any aspect of forgiveness against that betrayal) and following the pattern Plasmagica with Cyan in the lead discussed with BudVirginLogic after they had also been “defeated with music” the Queen returns to a semi-normal personality, seems very tired, more at peace and perhaps a little happier with the seeds planted from way back when finally being allowed a chance to sprout. 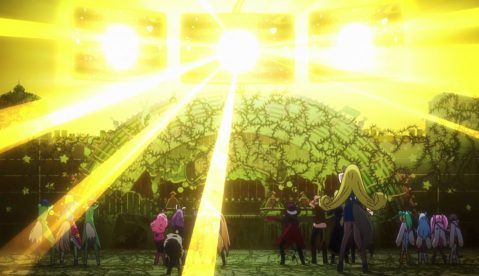 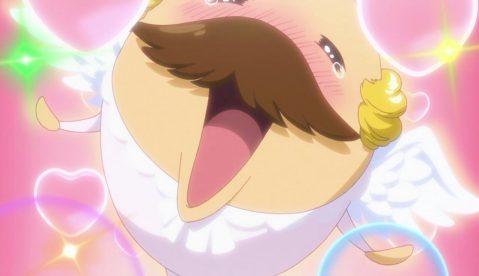 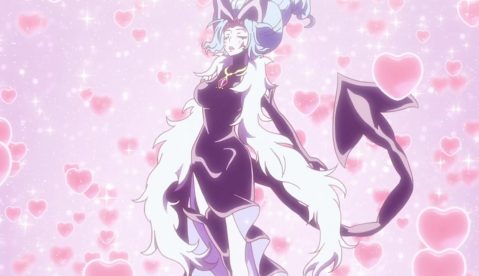 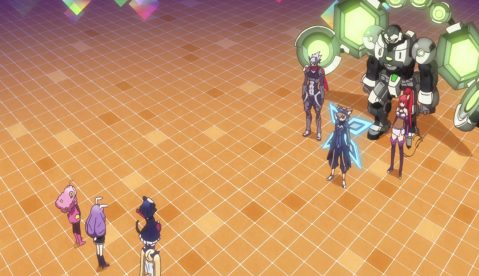 After all this who should arrive on the scene but … the time traveling music band Ninjinriot! (Their time traveling shtick seems dreadfully limited.) They reassure everyone that the planet has been saved and that they are here to send Cyan back to her own world. As expected, there is a lengthy sequence of farewells between Cyan and the other members of Plasmagica. Must admit that I was kinda frustrated at this point as it seems the art style of the animation took a tiny bit of a nosedive, particularly in the facial proportions of many of the characters, but the last moments before Cyan’s departure from Sound World (this time around?) were lovely, showing her standing and looking over her shoulder in one of her signature poses.

The end credit sequence shows Cyan back in her own world and singing with her club band – apparently she has been able to finally pen the lyrics for her new song (this whole thing was mentioned back in episode 1 for those who remember) and admittedly it did sound good; in some ways I liked it better than the final battle song everyone worked on together to battle against the Queen of Darkness. For now I will not develop my thoughts any further, though, and will save some of my overall assessments for the final review of the series. Many thanks to everyone who followed along with my admittedly erratic posts on this series this season! I enjoyed blogging the series!