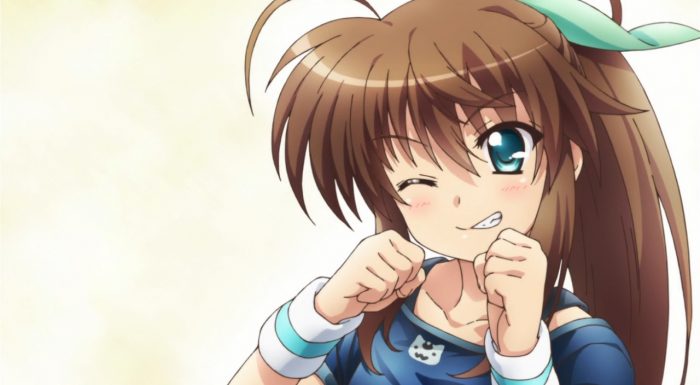 At least I’m starting to understand why they didn’t show many of Fuka’s fights to this point. They wanted to save the surprise of her being ungodly hax for as long as they could XD. Not often that I would call characters utterly broken, but Fuka definitely hits that level. She’s basically a martial arts god. If Jill has always focused on finding those with stupidly good talents and considering them the best fighters then she is kicking herself over not finding Fuka. She’s just utterly broken. The girl can literally master anything. Fuka has been doing this for 4 months….4 months and she’s already at the level where she can realistically beat the ranked #1 fighter. It’s going to take Einhart a miracle to beat Fuka for the title match.

Not that I think it was right to skip Fuka’s fights, but just now it makes sense. Her abilities are just nuts. She is the kind of character you send travelling around for a few years and she comes back having mastered every single combat style imaginable. Where is the weak point? The only downside to Fuka is that she has to learn something. It’s an interesting comparison to be made to Nanoha. Both are very gifted characters who started near the bottom. You could even say Nanoha grew way faster than Fuka has. Maybe it feels less acceptable because it is a martial arts show? Or maybe because Nanoha still had weaknesses (she’s a long range fighter, not close combat focused) while Fuka seems pretty well rounded for the field she fights in. In the end Fuka is just a really powerful character because of her natural gifts. 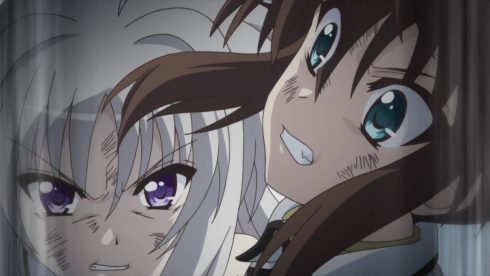 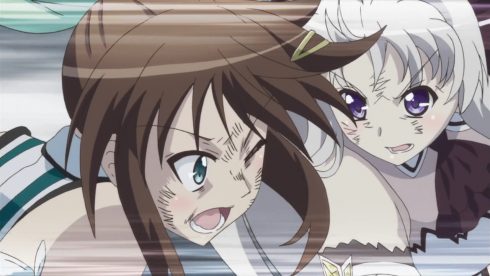 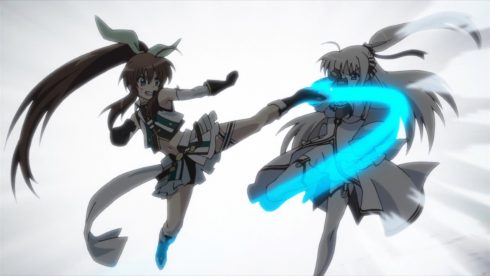 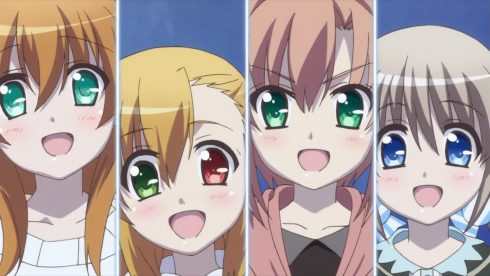 I suppose the weak point with Fuka is something that Rinne herself brought up in the episode. Fuka is not good at and basically sucks at giving motivational speeches and talking to people. I suppose that might tie into her personality and lack of development through most of the show being a fair criticism to this point. It’s really only in the second half of this episode that we get into her head.

In some ways you could say it explains the almost antagonistic feeling the end of last episode gave off. Fuka is not good at getting across how she feels. Through most of this she has been talking about being pissed at how Rinne has acted or angry her being swayed moment to moment. All of that though seems to be more Fuka’s own anger getting the best of her and the girl utterly failing to get to the point she really wants to make. They spent so much of that fight on things that don’t really matter. Fuka hasn’t come this far because Rinne’s actions offended her (well partly that). The reason she came this far was because she saw what her friend was doing to herself and how the person that helped her smile was utterly unable to anymore. 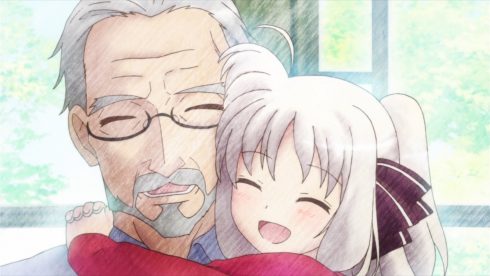 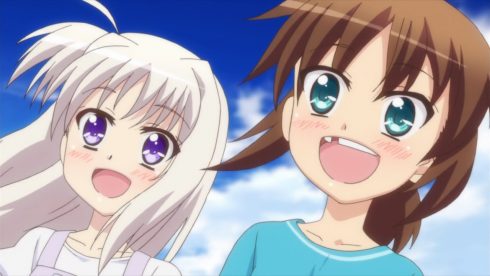 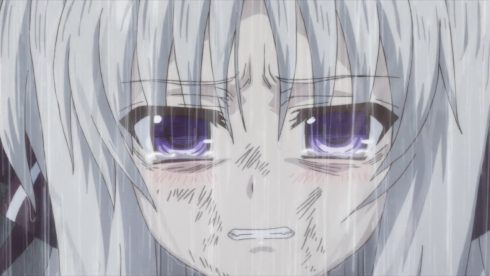 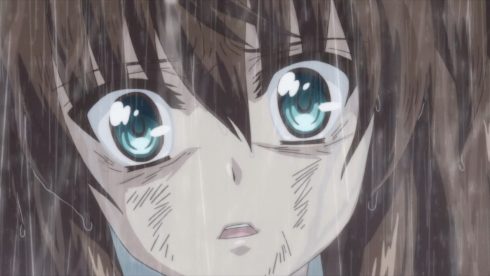 Of course it is possible that Fuka lost her head along the way and her frustrations did heavily motivate her. But, at the very least this episode doesn’t end there. In a sense it is thanks to Rinne that things don’t continue on that path. Rinne remains the best developed character in Vivid Strike and that continues here. We finally get one of our first truly emotional reactions from Fuka since maybe the first episode. Rinne finally got across just how deep her despair and self-hatred is right now. That the person she can’t stand the most is herself. And you can see that self-hate throughout the series.

In a sense this episode shows how much of Fuka’s words were a front. I only wish the show had made it clearer that she was deceiving herself. Her words at the bath sounded nice and mature. It isn’t outright wrong to say that you can’t share in the burdens of what someone went through. But in the end…she still wants to. If Rinne is suffering to such a degree then of course she wants to carry half of that pain. That is the kind of Fuka I’ve wanted to see more of; the girl who was broken up when her friend seemed lost, the girl who herself became lost when it seemed like Rinne had turned into a stranger, etc. I didn’t need a Fuka who wanted to beat the bad attitude out of Rinne, but rather the one who wanted to fight in order to save her. 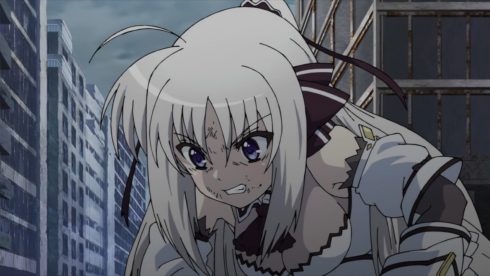 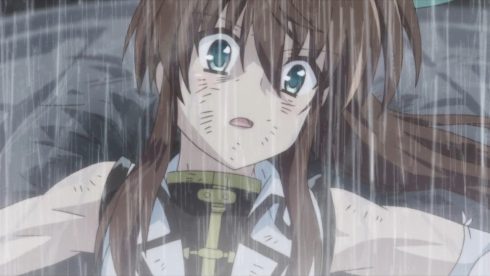 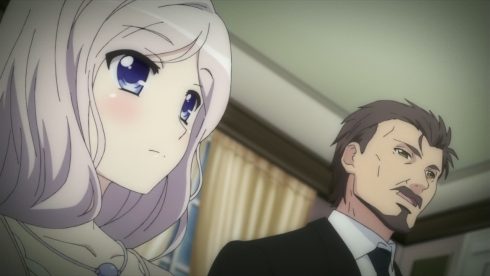 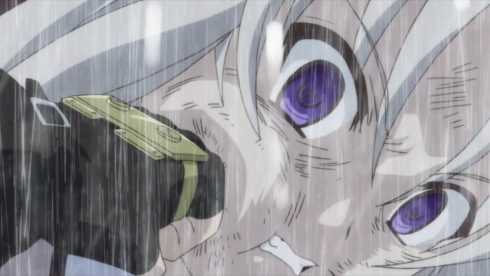 Rinne puts so much on her plate in what happened in the past and how she can’t move forward in the present. Even Rinne sees how utterly lost she is right now. She looks back at the decisions made in the past and hates herself for them. There are of course the regrets for the decisions she made after going to the school, but it doesn’t end there. Rinne wants to forgive herself and move forward, she wants to be able to smile, she wants to be able to enjoy herself, she doesn’t want to see her parents with murky smiles, and she wants to be able to see her grandfather smiling in her dreams. Rinne does want all those things, but she can’t forgive herself. No matter how much she wants those things a strong part of herself won’t let her have them.

There is no doubt that what Rinne will need most is therapy. The level of emotional trauma here is mindboggling. It can and probably should help if she can at the very least accept Fuka to carry the pain with her. From what we’ve seen it makes sense for Rinne to push Fuka away to not drag her down. Even Rinne can see how utterly self-destructive this is. The last pure memory she really has is those times with Fuka. If she accepts Fuka and buries her in pain as well…I can see Rinne feeling like that would be the worst possible result. And it all is probably a mixture of emotions. Part of Rinne may feel like Fuka doesn’t have a clue and can’t ever, that she is a stranger to this situation. I think part of Rinne also wants Fuka free and clear from what she has become. 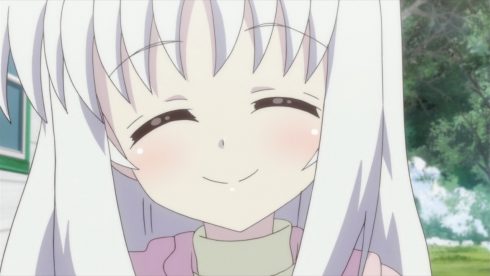 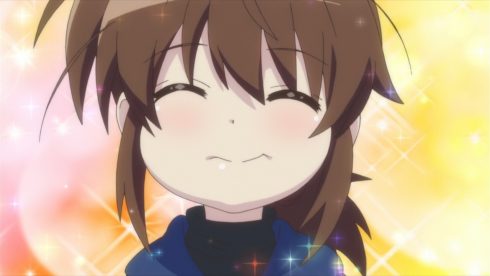 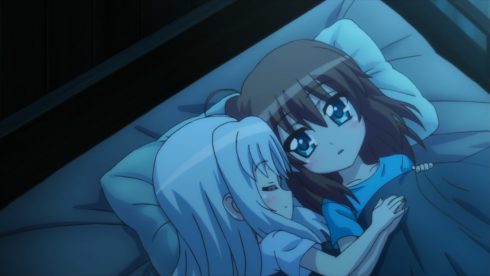 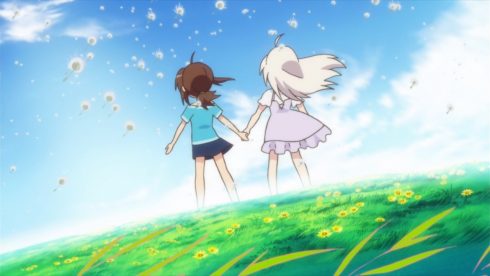 The fight itself almost doesn’t matter here. Though I still think it’s a big issue for them to just make Fuka broken in order to give her a way to win. It does seem like the terms of this match have now officially set up Rinne to lose. Creating that promise that Fuka has to leave her alone if Rinne can win and also the injury that Rinne has sustained. Even if Rinne can win that injury probably won’t let her compete against Einhart any time soon. Although I suppose the show could end up surprising us.

I do think that Rinne winning and yet still standing by her friend would help show more growth on her part. But, maybe part of that is just because Fuka’s win seems so guaranteed that I’m pulling for the underdog XD. Somehow the show has managed to make the #1 ranked fighter of that age group into the underdog. At least they managed to drag some emotions into this. It makes sense that Rinne was something special to Fuka. A person, who was always upbeat, found the good in anything and helped her smile for what felt like the first time in her life. Here is hoping that episode 11 is amazing and is everything I hope it will be.