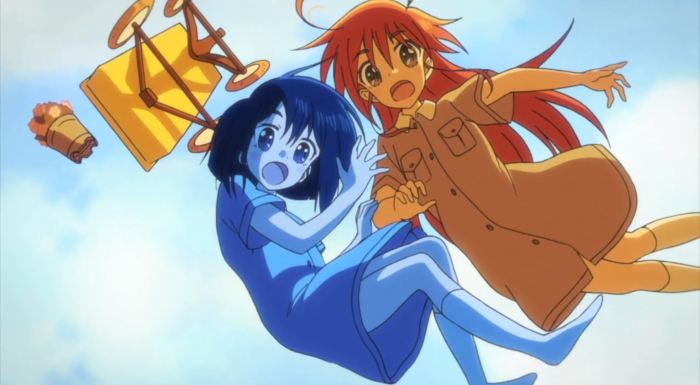 Cocona and Papika’s journey through adolescence continues, although in a different direction from last week. It looks like Flip Flappers is developing a rhythm here, alternating between stories of awakening sexuality and stories of deepening understanding and empathy for others. And with a place as flexible as Pure Illusion, “seeing the world through someone else’s eyes” can be a whole lot more than just a metaphor.

Team FlipFlap takes a quick break from collecting fragments so Cocona (and Papika, to a lesser extent) can strengthen her growing friendship with the art club senpai, Irodori Iroha. When the conversation turns to nail polish and Iroha darkly remarks that she “doesn’t have the right” to paint her nails, Cocona looks on with curiosity and concern. No wonder, then that the next time they travel to Pure Illusion, it looks a whole lot like one of Iroha’s colorful, surreal paintings. 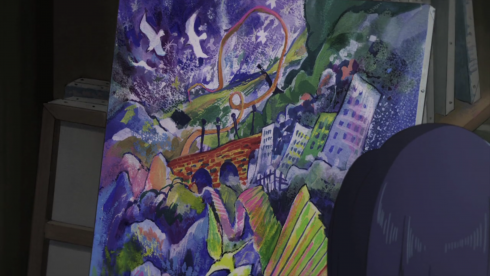 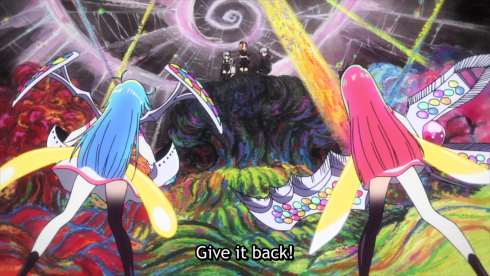 I’ve talked about Pure Illusion as an Umwelt–a reflection of the self-world of the explorers, especially Cocona–and this week continues that trend. Iroha is on Cocona’s (and Papika’s) minds, so Pure Illusion reflects that. But then something new and exciting happens: A gate opens to an even deeper layer of Pure Illusion, where Cocona and Papika aren’t just thinking about Iroha, but actually become her, reliving key pieces of her childhood and her relationship with a kindly neighbor she calls “Auntie.” The girls have moved on from their own combined umwelt into someone else’s entirely.

What follows is a story that’s a beautiful, painful, profound depiction of one girl’s emotional reality. Cocona and Papika each become “Iro” because Iro sees herself as having two lives: The Iro who spends time with her supportive Auntie in a world of perpetually soothing sunset oranges, open spaces, and natural greenery (flowers and plants are everywhere), and the Iro who goes home to her demanding, argumentative parents in a world of stark blues and blacks, narrow hallways, and looming, warped authority figures painted in violent reds. All the Iro in Blue can do is frantically draw and demand to “switch” with the Iro in Orange at every opportunity. 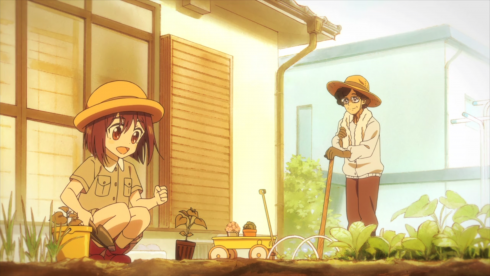 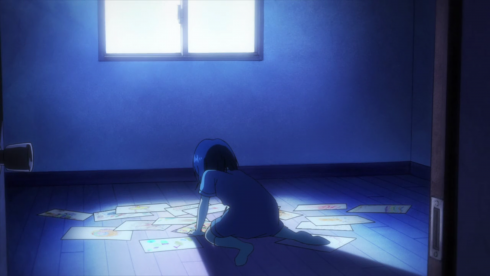 The story of the lonely kid who finds a supportive presence outside the home is a familiar one, but Flip Flappers breathes individuality and genuine pathos into Iroha’s story, thanks in large part to its vivid visual representation of how the world feels to her. Our general attitudes and emotions are influenced by the atmosphere around us (and vice versa, in a kind of perpetual loop of interaction), and so Iroha shifts between the hopeful oranges of Auntie’s world and the despairing blues of her own home, all while avoiding the angry reds of the kitchen, her parents’ domain.

While each of us is a single person (“Iro is Iro, too”), none of us are the exactly the same person at all times. We adjust depending on where we are and who we’re with. Sometimes this is as trivial as wearing slacks at work and sweatpants at home, but often it’s more complicated, tied closely to our sense of safety and personal worth. Iroha fluctuates between feeling worthless and valued, between hiding and revealing, and seeing those changes reflected in Papika and Cocona’s own color palettes when they trade places is an unspoken but powerful representation of that. 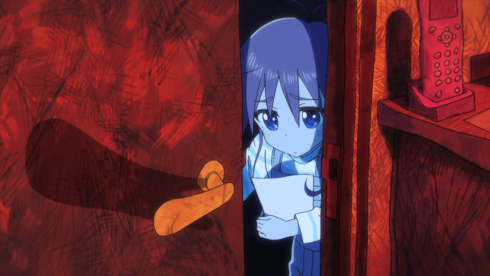 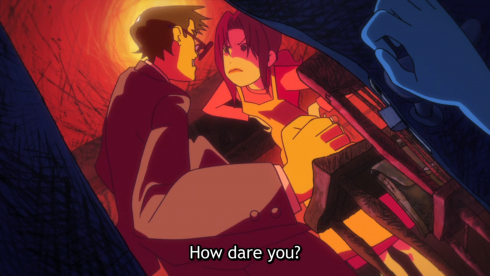 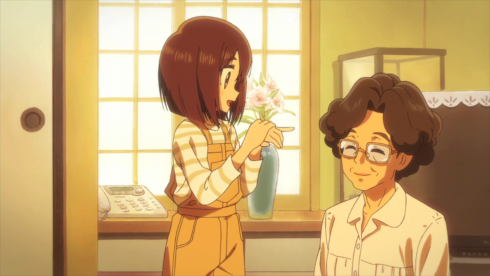 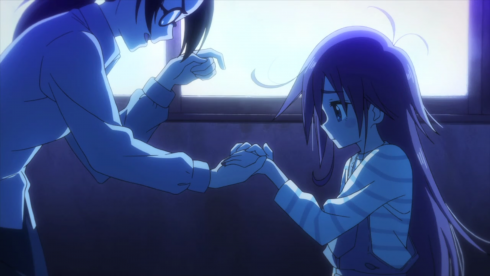 Iroha’s story is uniquely her own, but it also fits with a lot of Flip Flappers‘s ongoing ideas. As we’ve talked about before, Cocona is a girl of propriety, concerned with the “normal” way to act. Iroha fights with these expectations in her artwork, which her parents call “weird,” but Auntie challenges this by sharing her own story about being an unmarried teacher with no blood relatives (an oddity among women in Japan, especially for her generation) which Iroha firmly tells her isn’t “weird” at all.

In the most uplifting moment of the episode, Auntie assures Iroha that “even if some people might find something weird, it might not actually be.” Normal and weird are in the eye of the beholder. Auntie thinks Iroha’s paintings are unusual “in a good way”–a difference that’s to be celebrated and nurtured, not squashed. Hearing this is vital for Iroha’s confidence and art, and will likely be important for Cocona’s journey, too. 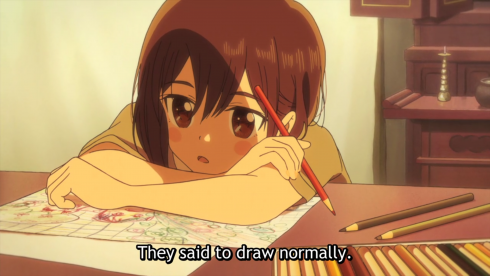 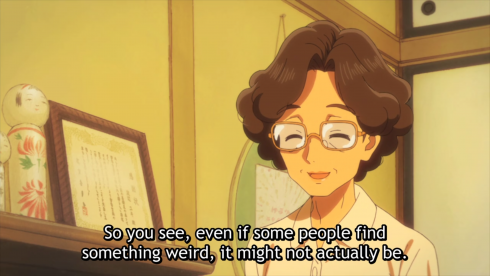 Since Flip Flappers is a coming-of-age story, the promise and fear of adulthood rears its head in Iroha’s story, too. The nail polish you get to wear “when you’re older” is the most obvious, positive example here. In general terms, it’s a way to present yourself as a grown-up to be taken seriously, but for Iroha, it also represents the ability to change yourself–to decide your own colors, rather than being forced to wear the blues and oranges of the world around you. It’s independence and agency: The freedom to define yourself.

It’s also responsibility and courage, especially the ability to face hard truths, including the hard truth that “growing up” also means losing things, including loved ones, which is why present-day Iroha says she doesn’t have the “right” to wear it. Horrified by Auntie’s deteriorating health and memory, she can’t provide support for the woman who’s already supported her, and so she flees into a darkened hallway, coloring herself in permanent blues. 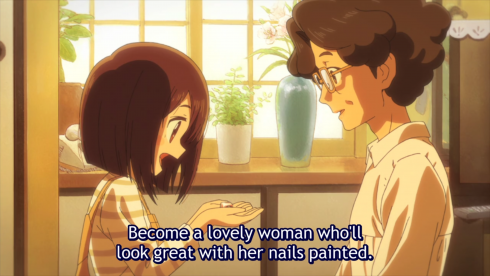 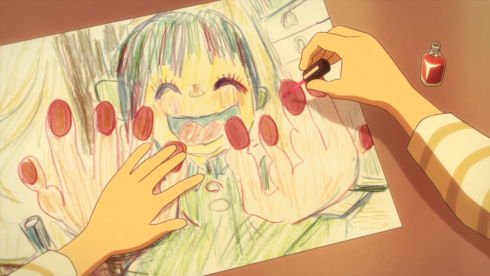 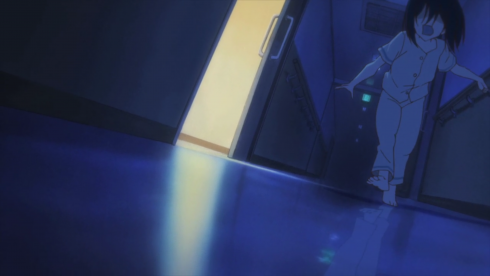 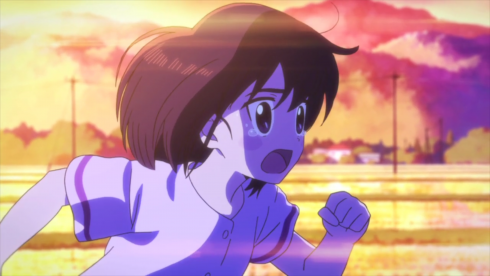 Cocona’s desperate desire to “switch” with the isolated Papika is a heartbreaking moment, a child realizing that even the safest of places can be torn apart by something as natural and cruel as time. But, once they’ve finished grieving, the two girls–the two halves of Iroha–also realize they can’t run away, no matter how much they want to. They can’t pretend there are two of them anymore, that one life is different from the other.

In order to be true adults, to have the “right” to wear that nail polish, they need to accept all of themselves, even the sad and hurting parts, and they need to find the courage to face the horror of forgetfulness and, ultimately, death, for the sake of someone they love and a relationship they cherish. So they link hands and return to Auntie’s bedroom, and they keep their promise. They remind her. And the soft sunlight returns to their world again. 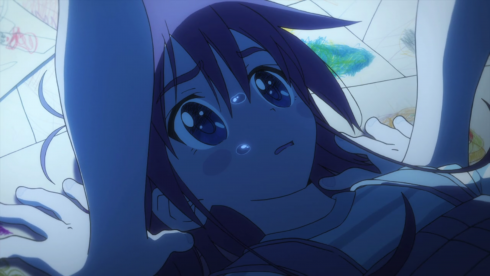 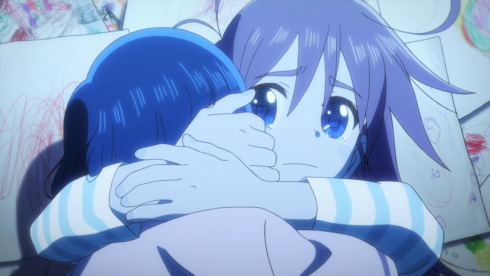 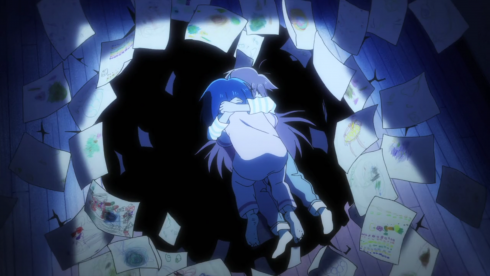 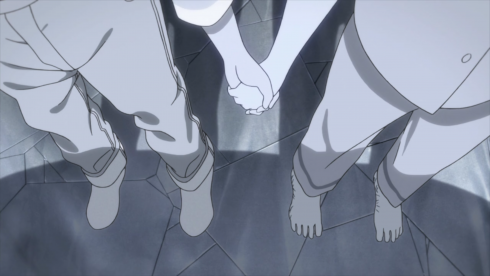 For Cocona and Papika, this is a story of empathy. They’re tossed out of Iroha’s memories halfway through, but they choose to return because they want to know “who we were.” They have another chance to leave after Auntie’s hospitalization, but they remain because they want to keep their promise to her. Each time, they choose to try to understand and help others. That Cocona decides to do this means a lot for her character, and the fact that Papika doesn’t push her in any direction, only supports her choices, means a lot to her character, too. Our girls and their relationship are growing.

As for Iroha…well, that’s less clear. Before the girls entered Pure Illusion, Iroha refuses to wear the nail polish. After the girls leave Pure Illusion, they find that Iroha has happily painted her nails. The “memory” of Iroha returning to Auntie’s bed clearly takes place when Iroha was a child, which seems to suggest…what, exactly? That Cocona and Papika changed the past? That they not only entered Iroha’s Umwelt, but actively took it over, using their combined strengths to give young Iroha the courage to do what she couldn’t before? 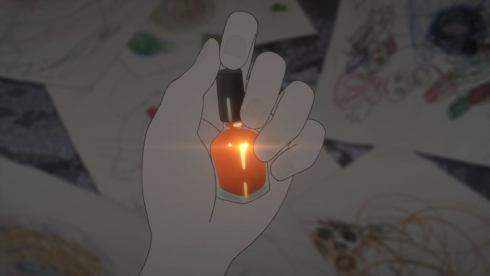 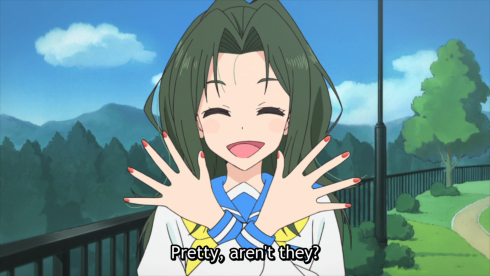 I mentioned last week that the barriers between Pure Illusion and the real world seemed to be blurring, and now that definitely seems to be the case. Is this what Dr. Salt meant by “liberating” Pure Illusion? And is that necessarily a good thing? We’ve got half a season to find out. And after Flip Flappers both broke and warmed my heart this week, I’m fully invested in learning all about it.