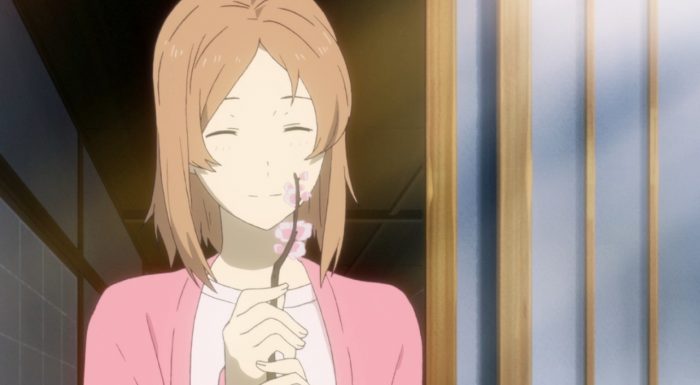 This was another really strong episode for Natsume. There is just such a high level of consistency when it comes to Natsume for delivering some really good episodes. It’s rarely about fighting off some evil youkai (though there are some out there), but rather the more emotional angle. This was another really good episode for the emotional side of things. It does tell an interesting story. Not the first time we’ve had this kind of sad feeling about the gap and distance between humans and youkai. There can be these momentary meetings or the rare exceptions like with Natsume. However, youkai and humans tend to exist in different spheres and almost always fail to meet. It is arguable that it is more painful for the youkai whenever they do cross paths with humans. They’ll either vastly outlive the person or possibly never speak to them more than once. 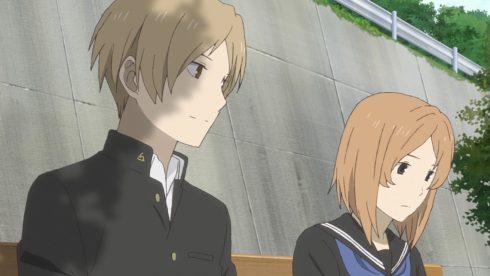 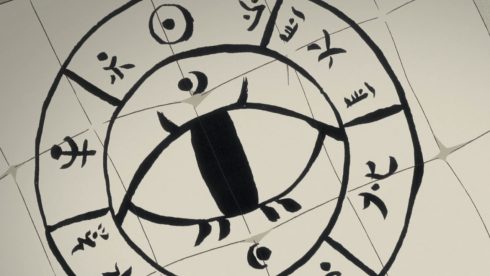 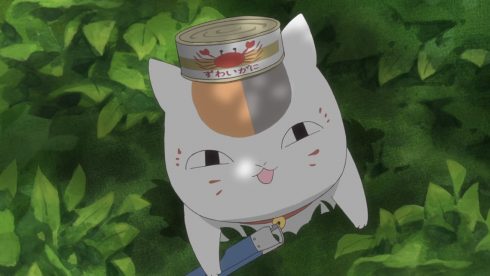 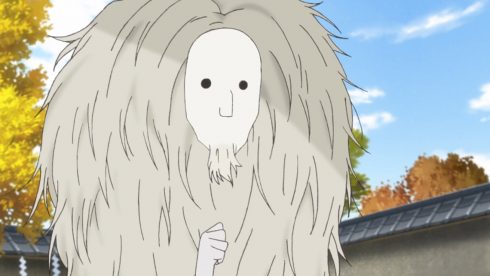 The show of course wanted to leave it unsaid…but I won’t XD. In the end that fuzzy youkai fell in love with Taki. Not that surprising in a general sense since Taki is a kind, friendly, and beautiful girl. That combination will lead to a lot of beings falling in love with her XD. But it is tough and this episode shows the difficulty. A brief meeting lead to him falling for Taki, but without that circle she can’t see or hear him. It is almost as if he doesn’t exist in her world at all. Yet he had those deep feelings about wishing he could take Taki with him to see the beautiful place that was his goal. But at the same time he fully understands that isn’t possible.

It is kind of sad in all respects. Taki just wants to help and do what she can for others. She feels a sense of responsibility for the fact that her grandfather turned their home into a nightmare for youkai to get stuck in. And she simply wishes to use that circle as a means to help. She has nothing but kind intentions and yet cannot on her own see or hear any youkai. Taki is kind of left living in the dark and having to rely on tools or other people to help her connect to that world. 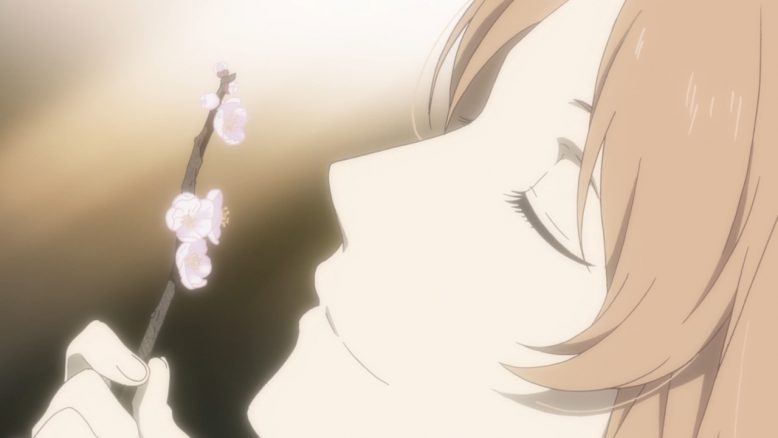 Can’t blame the guy for falling in love

In a sense it is remarkable that Taki maintains this mindset. The trauma she suffered by that youkai that cursed her would have made most people want nothing to do with that world. I think a lot of people would have thanked Natsume for his help, burned all the circles papers and never dealt with Natsume or youkai again. Taki was different though. There is a level of fear when dealing with large youkai (which is understandable), but she’s still willing to get involved. In a sense she has similarities to Natsume in terms of a precious inheritance by their grandparents and a willingness to help others. Taki treats the youkai with respect and care even when she can’t see them at all. She really treasures the positive encounters she has had with them.

The whole issue with Taki’s circle is an interesting one. We had the youkai arguing that it was a kindness to make that thing forbidden. On his side of things it was painful to make that contact. He looked into the eyes of a human, fell in love, and suffers from knowing that they are so far apart and different. Even the rabbit youkai didn’t want to get involved with people again if it could lead to a trapped friend like in this episode. 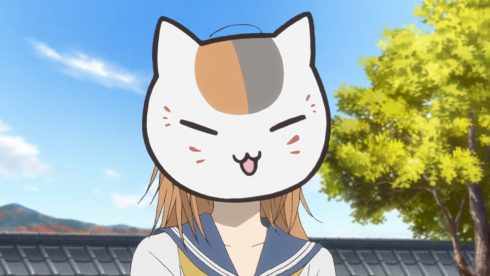 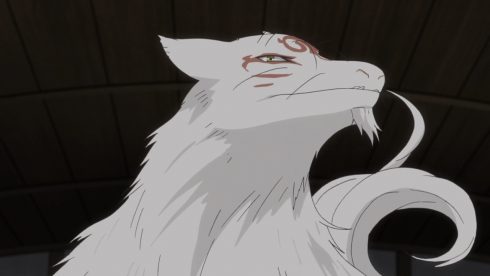 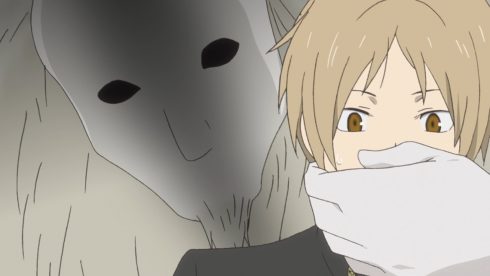 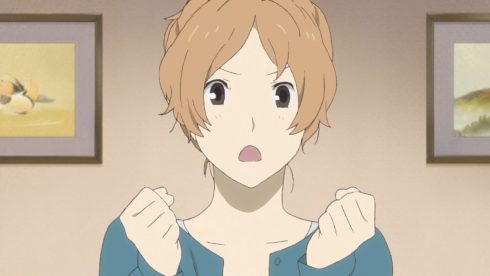 However, I can’t see the circle as a negative or evil thing. There are costs, but what about the gains? Those youkai would have been in a pickle until Natsume randomly visited or Taki detected enough to ask for his help. When Taki cut her finger that one rabbit youkai was worried about it. Taki might not be able to naturally see and hear youkai, but her kindness still gets across. This encounter did teach all those youkai that people aren’t all evil. Even the ones who don’t have a gift like Natsume can still be kind and understanding to youkai.

I think the point about the circle or the book of friends is that it depends on the person. It can be a poison or it can be a medicine, it just depends on the individual. These things are tools and aren’t inherently good or evil. The exorcists might declare them forbidden for simplicities sake, but they can’t decide whether a person has good or bad intentions. Neither Reiko nor Natsume use the Book of Friends for evil and neither does Taki with her circles. Maybe forbidding them helps limit the bad people who might try to use things like that, but it doesn’t make them inherently bad. 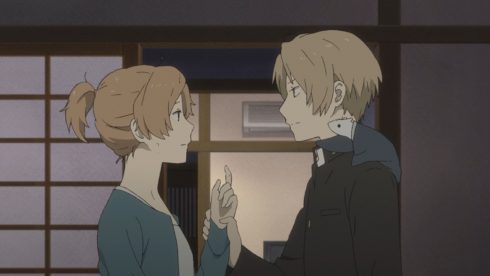 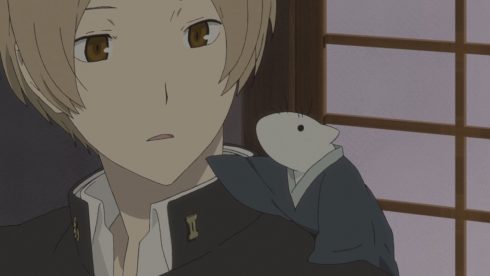 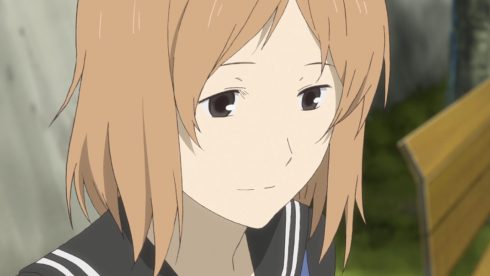 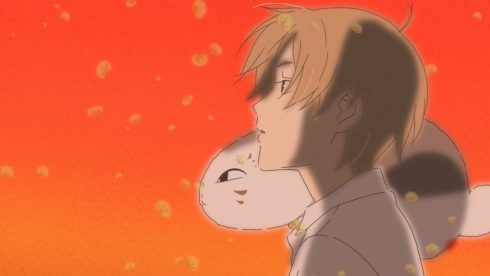 One thing I did really like about this episode….is that the ED is finally good! Maybe someone involved in the show complained, but the ED is finally in a form that it should be. I don’t think the song is changed, but instead of a pointless and bland image…we get the Natsume ED that tells a little story. It feels like a fall kind of scene that we get. It has stylized drawings of Natsume standing in a field with his friends popping up and doing things. I think it just shows nicely that Natsume isn’t alone any longer. He has tight bonds with his human friends, with Nyanko-Sensei and the Fujiwara couple. It isn’t too complicated, but much better than the visually lacking ED from episodes 1-4.

I kind of hope we get another Taki episode or scene with her going forward. But we’re almost half way through the season so that might not end up happening. Natsume has so many connections that if you spend an episode just giving each of them a bit of attention that is pretty much the show right there XD. But, I did really like this episode. It doesn’t have a simple and happy ending to the youkai’s situation nor really say whether Taki’s circle is a good thing for her to use or not. It just accepts that things are sometimes mixed.