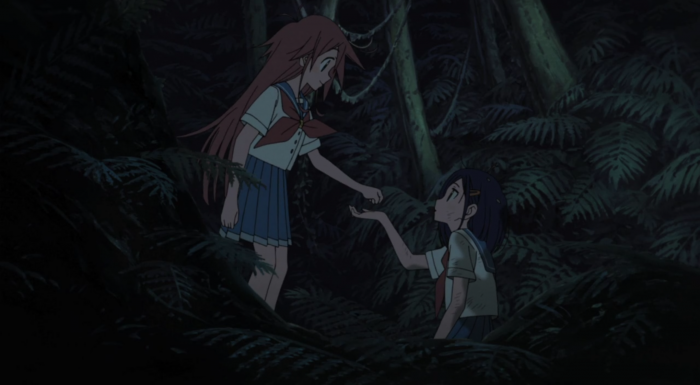 With last week’s failed mission hanging over everyone’s heads, Team FlipFlap decides it’s time for Cocona and Papika to get to know each other better. All of Flip Flappers’ episode titles have related to electrical circuits and electronics (Input, Conversion, etc.), so it’s no surprise that the girls’ main problem is framed in similar terms: They need to get their “Impedance” down to zero, otherwise they can’t synchronize, which leads to all kinds of problems, from opening portals to staying together when they world-hop to controlling the “real-time discrepancy” between Pure Illusion and the mundane world. Simply put, there’s resistance between the two, and they need to lower it if they want to be successful.

At first glance, the high levels of Impedance look like Cocona’s problem. Papika, after all, jumps at the chance to spend more time with her partner, calling it a “slumber party,” while Cocona frames it as a businesslike “training camp.” Even so, she’s happy when her grandma gives her permission (Grandma’s been really good about giving Cocona more freedom and agency as she moves from child to young adult), and for all her reluctance she can’t hide her amazement at the brightly colored “tunnel nest” Papika creates for them. Cocona’s willing to make it work. Papika’s the one who initially makes it awkward. 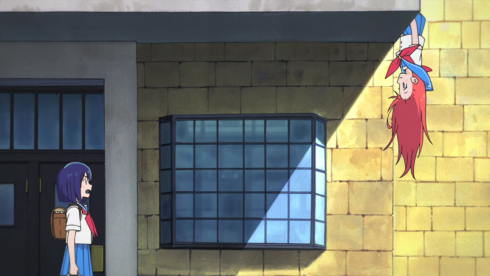 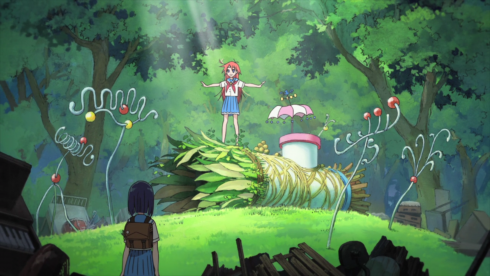 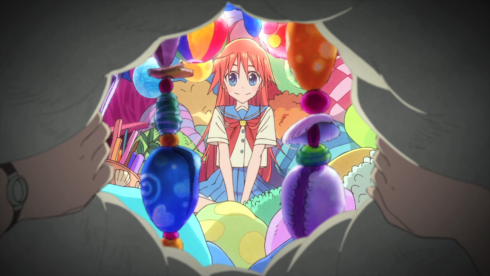 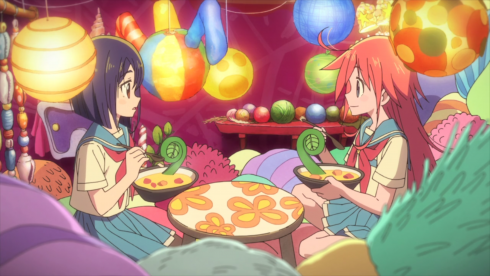 Papika is friendly and wants to make Cocona happy, but she’s also overbearing and thoughtless, barreling forward with what she thinks is a good idea without stopping to ask if Cocona actually likes it. She tends to dominate their interactions and activities, making it hard for the more reserved Cocona to find a space for herself. Her tunnel nest is a perfect example of this, as she clearly did it so they’d both have a safe space, but she didn’t involve Cocona in its creation. So when Cocona enters, she says “ojamashimasu,” a greeting used when entering someone else’s home.

From here on, Cocona never quite feels comfortable, despite her efforts to adapt. Papika’s foraging expeditions tend to leave chaos in their wake (and Cocona stuck dealing with the mess), and the way Papika instinctively knows what to eat without knowing the names for any of it is unsettling to the book-smart, nature-naive Cocona. Add to this Papika’s total inability to acknowledge boundaries–popping in on Cocona when she’s bathing, sleeping in the nude right next to her friend–and it’s no wonder Cocona can’t sleep and flees to Uexkull’s familiar presence. 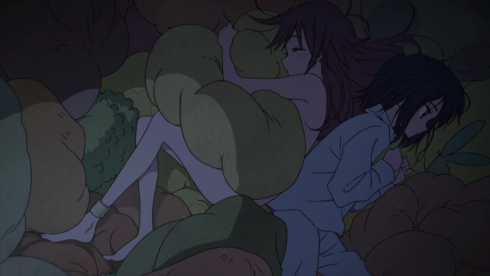 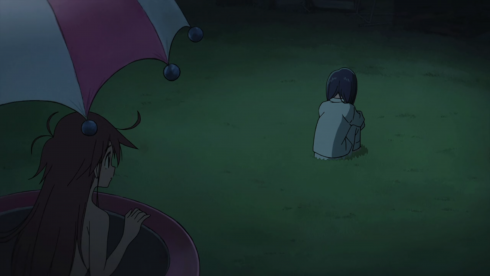 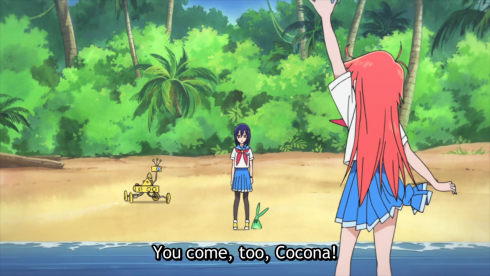 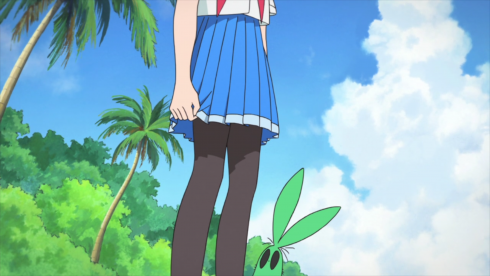 While it seems like every episode of Flip Flappers has one annoying shot that doesn’t need to be there (this week it was the slow-pan during the shower scene), the way the series uses clothing and nudity is actually pretty smart both in terms of character work and overarching themes, highlighting the girls’ personalities and the rift between them.

Papika is nature, instinct, exhibition: “I want.” She carelessly strips in front of others, barges in on baths, and doesn’t worry about how her clothes are supposed to look. Cocona is civilization, planning, inhibition: “I should.” She covers Papika in front of others, gets embarrassed by nudity, and makes a big deal out of “properly” wearing their uniform. The way she tugs on her own skirt after Papika knots hers is a nice bit of visual character work, suggesting that she’s annoyed by the “incorrect” dress–but maybe a little jealous of Papika’s free spiritedness, too.

They are opposing forces, and Flip Flappers sees value in both of them, but as the episode title tells us, they need to find equalization: a balance in themselves and in their relationship with each other. They find it, or at least the beginnings of it, when Papika’s thoughtlessness gets them stranded on a deserted island. It’s the perfect place for them, as it contains elements of both civilization and nature, giving them the chance to meet in the middle. 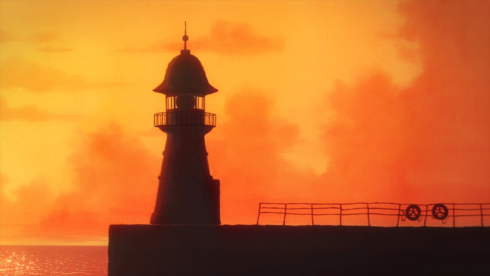 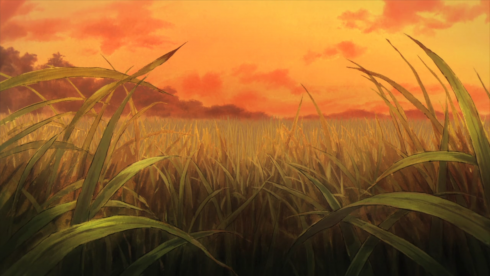 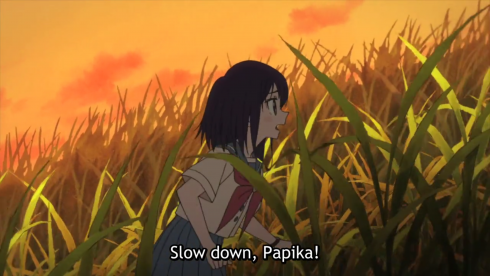 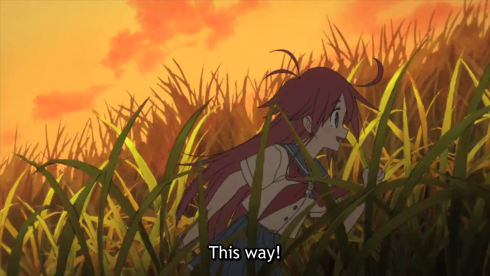 At first, it looks like Papika is just going to barrel off again, leaving Cocona out of her element in a natural world that seems intent on making her life miserable. Fortunately, while Papika’s thoughtlessness means she tends to lose things, she always finds Cocona again. This time, she finds her in a hole as emotional as it is literal, where Cocona’s at last able to admit that she feels useless compared to her friend. “I can’t do anything,” Cocona laments–to which Papika immediately responds by listing off all of the things she admires about Cocona.

The importance of perspective continues to play a major role in Flip Flappers, and in a lot of ways it forms the center of both the conflict and resolution this week. To Cocona, her ability to tie a scarf is common knowledge. Normal. “Anybody can do that,” she says. To Papika, knowing which fruits are good to eat and which are bad is equally common knowledge. But to each other, these skills are impressive, admirable. Special. 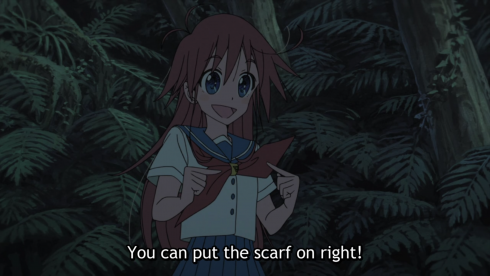 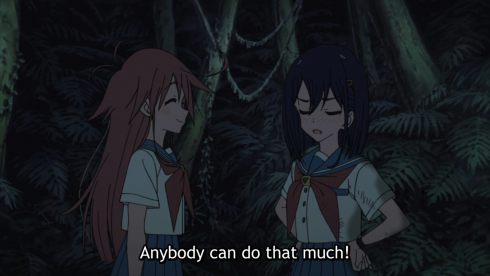 Sometimes we get so accustomed to our own worlds (our own Umwelts, like I mentioned last time) that we don’t see anything special about them. It takes another perspective to make us understand their uniqueness and, in turn, our own value. Cocona and Papika do that for each other this week, and it’s that acknowledgment of the other’s strengths–that sign of mutual respect–that lets them slowly open up to each other and cooperate.

There are still some holes (as demonstrated by the leaky bath), but overall their relationship seems much more balanced now. Cocona takes the initiative on how they’re going to get off the island, she talks freely about her past and her wish to meet her deceased parents, and she’s finally able to sleep comfortably beside her friend. Papika’s still keeping a lot of secrets about herself and FlipFlap, which is concerning, but the fact that she sleeps fully clothed this time may mean she’s trying to be more considerate of Cocona, too. And, in the end, they cooperate to build the raft, rescuing themselves and synchronizing so well that they open a new portal to Pure Illusion on their way out. 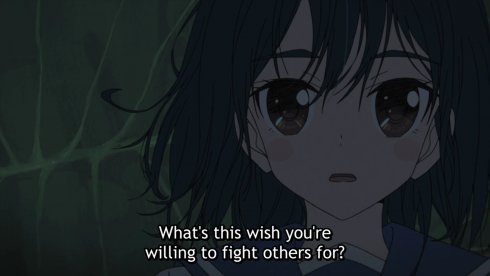 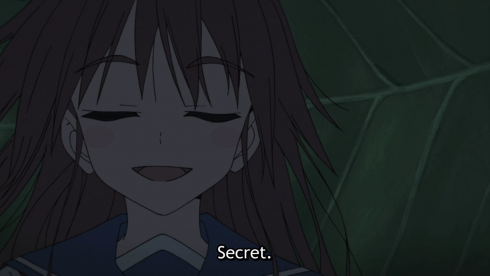 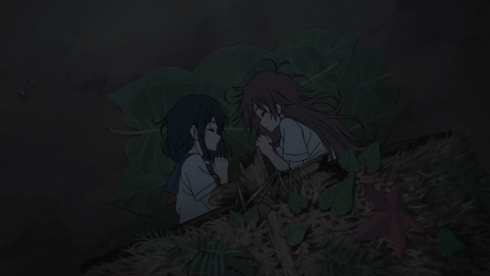 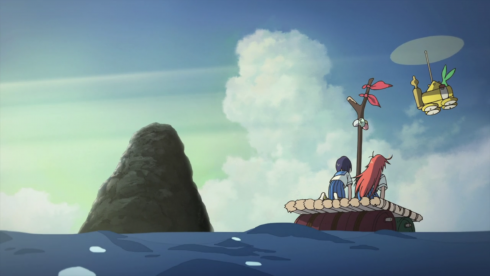 If Flip Flappers really is one big, fantastical coming-of-age story, then Cocona and Papika are two sides of the same adolescent coin: One is learning about independence and personal choice, and the other about responsibility and consideration. Both are equally important to becoming a healthy adult, and this week the girls took important steps towards not only growing as individuals, but as a pair. Given that I made a bunch of “AWW” noises during their final promise (“I’ll never let go”/”I’ll never go away”), I’d say I’m pretty invested in seeing that relationship grow even stronger.