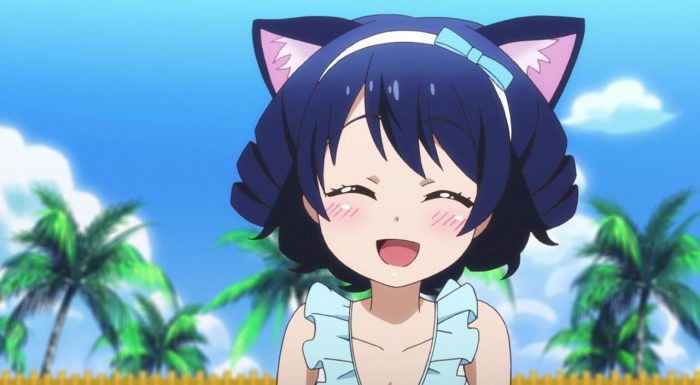 Well! Once again the Show by Rock franchise packs a huge amount of information (of varying sorts) into a single episode. I totally did not expect the infodump in the first few minutes of the series nor the means through which it took place. I must admit, though, that I am grateful for it. I have been wondering how in the world Cyan and company were going to pull off taking down the Queen of Darkness’ starship fleet. I mean Cyan was certainly able to level up to take out Dagger single-handedly, but while I would love to see Cyan take out everything in a single shot let’s face facts: it’s not a very realistic expectation … well it wasn’t before this episode. But after Tsurezurenaru Ayatsuri Mugenan shows up at Grateful King’s retirement beach house (why is Darudayu so consistently stupendous?! XD ) we discover that there IS a potential “power source” Cyan could use – very likely the power source the Queen of Darkness is looking for in the first place. 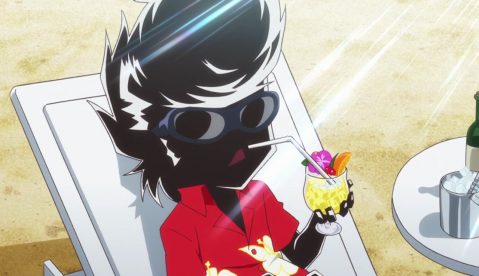 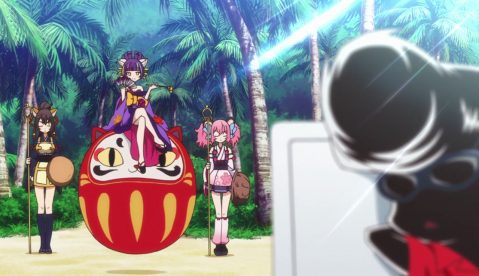 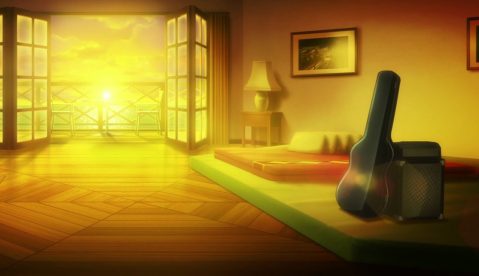 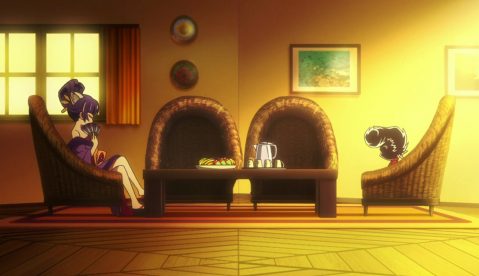 Much of the information we get regarding this power source is from a conversation between Darudayu and Grateful King, and they are discussing something already well known to the both of them. The name of the power source is named the “Melodisian Almaz”. This is the source stone of all the sound energy hidden in the myuumon’s melodisian stones – it is of the highest purity and has never been violated. It turns out that Darudayu and A and Un are all headed to find the Melodisian Almaz and ask (read here politely threaten into submission) Grateful King to keep watch over Midi City while they are gone, a fact in and of itself which certainly raises interest. Do the other city states on Sound Planet also have “band guardians”? How many of the large, well-known bands are involved in this activity? (An argument could be made, perhaps, that Ninjinriot is one of these types of bands as well.) After thanking King for accepting the task Darudayu inquires whether or no he “knows about the girl”? And sure enough, it is immediately clear who is being spoken of. Both know Cyan is back. 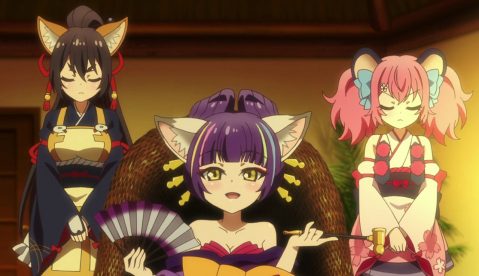 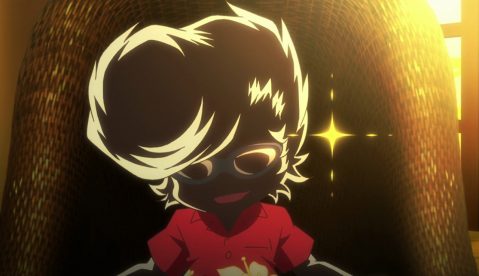 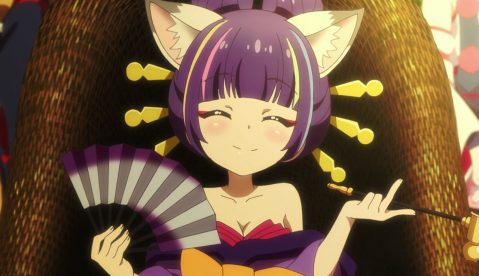 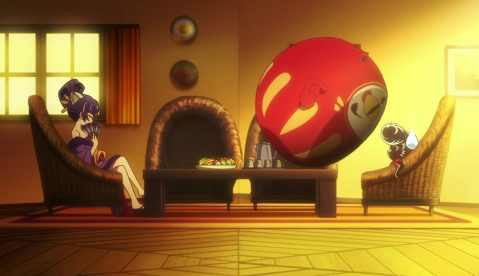 After this an unexpected scene is shown to the viewers, one involving two characters that are getting a bit more of the spotlight this season – Rosia from Criticrista and Ailene (!), who is the lead guitarist and vocals for BudVirginLogic. For some reason Ailene is at Rosia’s Middle School in a different school uniform and is playing a piano in what is presumably one of the school’s music rooms. While Ailene is playing Rosia is passing by (late to class) and on hearing her music opens the door a little and peeks in, only to sense the strong and disturbing “energy” radiating from Ailene’s back. It scares her so much she flees, and right at that moment Ailene senses someone watching her. Sure enough, Ailene is shown as a rather disagreeable personality … she was scary in the first episode with good reason. 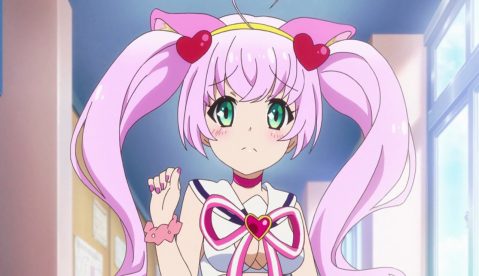 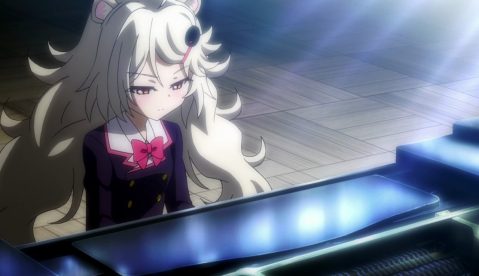 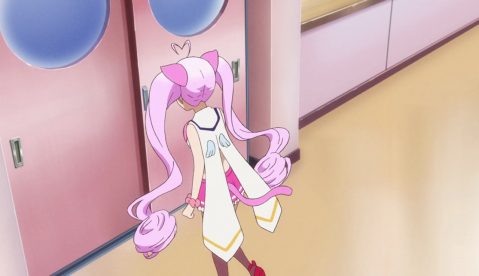 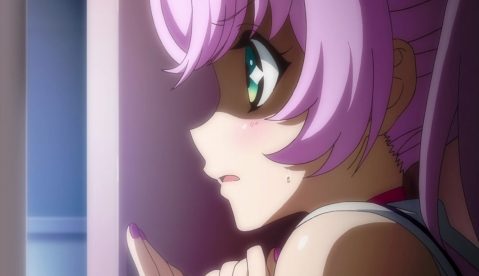 The main body of the episode itself is another “all-girls-bands” type event, a “water based athletics competition event”. Plasmagica and Criticrista are both taking part, of course, but some of the other bands we have met are as well. Dolly Dulci from the last episode shows up, together with last season’s band Shizuku Secret Mind (they showed up in episode 5). In fact, we finally get introduced to their band member Shabobon. In honor of the competition arrangements are even made to stream Trichronika performing from inside their spaceship while the games are underway … they are currently on a galaxy wide music tour. There is one other band that debuts in this episode, though they are not focused on a lot: their name is Studdo Ban Gyasshu. The band is composed of four members: Zebrina (a zebra on keyboard and vocals); Citti (a cheetah on lead vocals and guitar); Laina (a lion on bass) and Fennery (a fennec fox on drums) … for the record in the lower leftt screenshot they are the first four to the right of the yellow staircase under the rainbow sign. We only hear Laina speak, but we may see more of them this season as a whole. 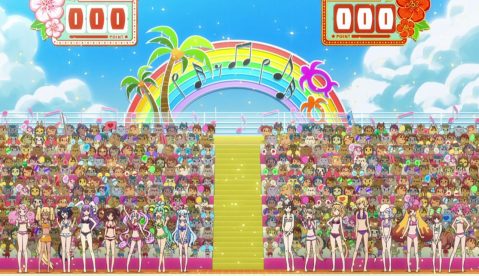 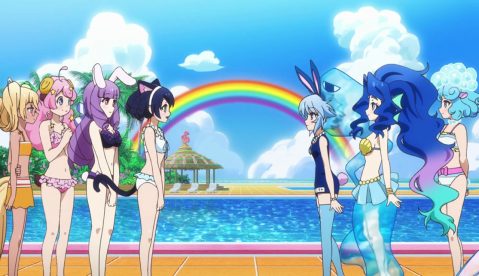 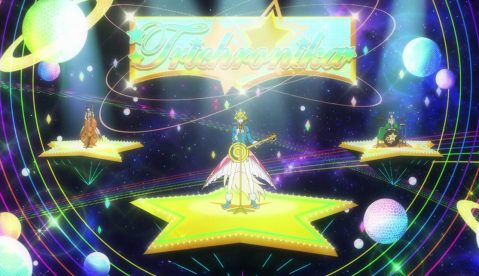 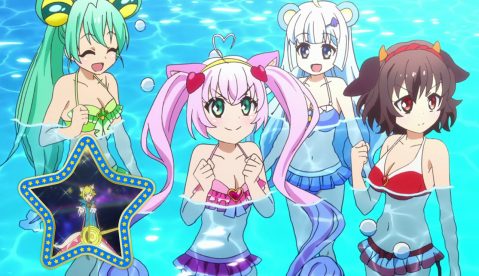 The main focus character wise regarding Plasmagica in this episode (Moa = ep 2, Chuchu = ep 3) is on Retoree. And more specifically focus is made on the angle of her bad relationship with Rosia. The dynamic for the bad relationship comes a very large amount from Retoree’s side of things – what it boils down to is her self-admitted jealousy of Rosia “getting close” to Cyan. After an unexpected accident and the two of them find themselves locked in a storage room together Rosia finally confronts Retoree on the matter and clears things up. Essentially Rosia says she is not really interested in Cyan as a person but moreso in Cyan as a talent (though I do think she is fond of Cyan in a friendly way), and somehow this honesty and frankness puts Retoree at ease, yes, but she also sees parts of Rosia that she was mistaken about, and immediately shows her soft side to Rosia and even contributes in the horse battle to their team (Rosia and she are in the same event) winning the match and as a result winning the event as a whole. 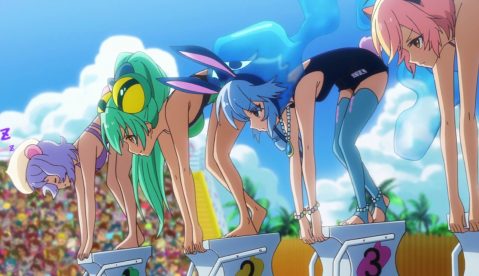 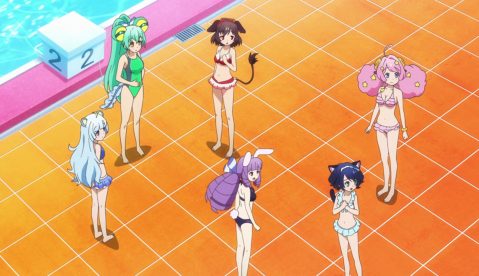 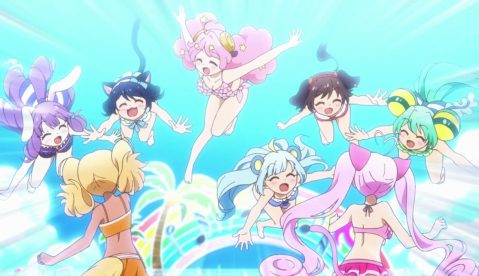 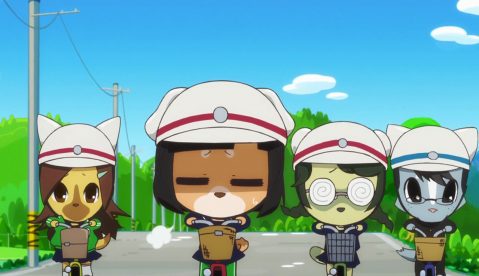 After much rejoicing and celebrations from the winning team (as well as each of the members of the BRR bands) we suddenly switch gears and the scene shifts to the members of last season’s “forever en route but never quite performing” high school band Uwasanopetals. And yes – they are all on bikes and heading somewhere. And they have not yet arrived. I must admit, it sure would be nice to finally hear them perform this season, and even more if they were to contribute to pushing back the Queen of Darkness somehow.

As for the next episode, if the preview is any indication it looks as if things are going to get serious for the members of ShingancrimsonZ as the gears of the “plans” of arrogant “artists” (remember they say they are not a “band”) Arcareafact seem to be moving finally. What’s more, if Cyan’s “Oh no!” face is a further indication it seems that something regarding the Queen of Darkness is finally going to go down. And I would not be surprised. Thus far we have had some character focus episodes focusing on the other members of Plasmagica, so coming back to the main plot would certainly be appropriate. Will see you all next week! ^^