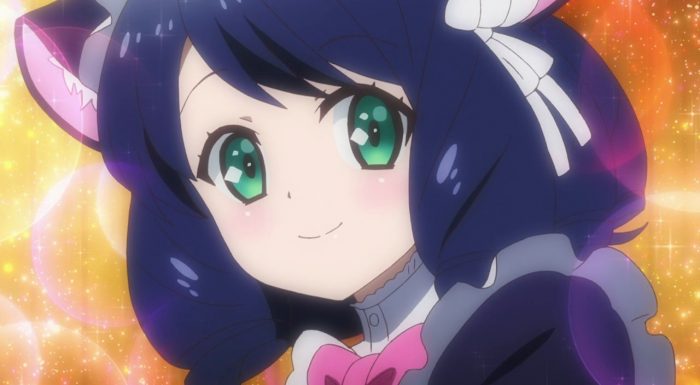 This definitely felt like a breather episode of sorts, although I could not shake the feeling that the various story tangents were being developed, or even lined up in rows already dug for them to proceed forward. Also, despite there being a sort of randomness and happy-go-luckiness to things there was a feeling that BudVirginLogic, Dagger, the Queen of Darkness and the rest were, as it were, somehow constantly “lurking in the background” – it was an odd sensation and awareness, but not a “disharmonious” one with the overall narrative thus far. At least for me.

One thing that did finally take place in this episode (in some ways the highlight of it for me) was the private talk that took place between Rosia and Cyan. After hearing that Plasmagica was also going to performing at the “Sweet Sweet Girls Fest” (a music festival at which only all-girls bands can perform) Rosia and the rest of Criticrista showed up in Cafe Angelica to congratulate the others, and Rosia apparently could not resist a little continued playful needling. 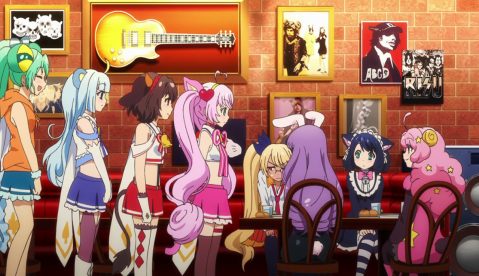 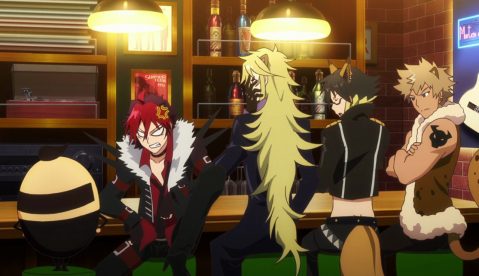 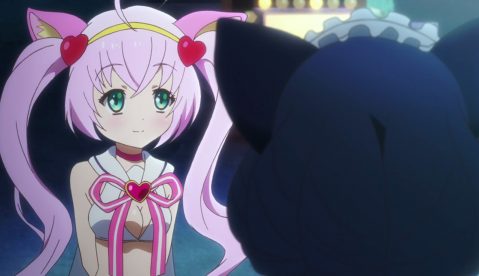 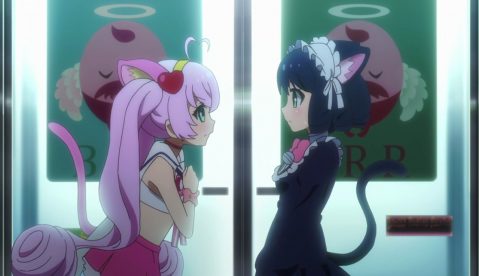 ShingancrimsonZ are also present, and still annoyed at President Maple for “neglecting” them in favor of the girls’ bands, but he assures them he has a job lined up for them – one he says that will fit them like a glove. Afterwards as the members of Plasmagica are heading off to brainstorm possibilities for the festival Rosia calls out to Cyan and asks to speak with her alone. In a lovely and endearing scene we get to see a little of Rosia’s heart – she really is both grateful to and fond of Cyan, and basically says so in a moment of touching frankness. She has indeed changed since the first season. ^^

One of the unique characteristics of the Sweet Sweet Girls’ Fest is that the bands that are going to perform also must create desserts to sell to the participants attending. (The year before Criticrista’s pudding, developed by Tsukino, was a big hit, for example.) Chuchu to her dismay soon discovers that the other girls are rather hopeless when it comes to baking sweets, but after much trial and error they finally are able to create some lovely little cookies of the band members! We see once again in the footage of Chuchu in this episode that she is incredibly competitive, and wants nothing more than to do things the best possible way … and more if possible. 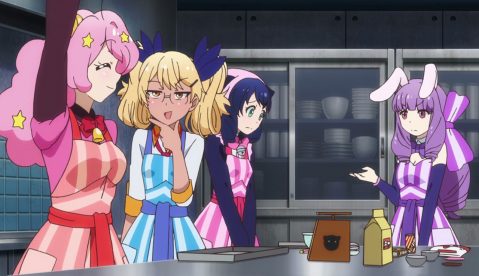 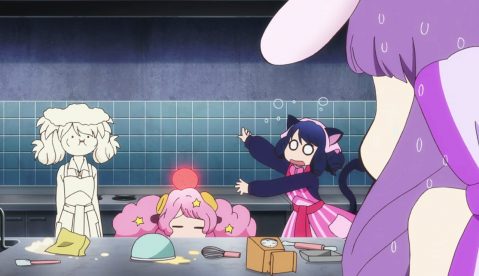 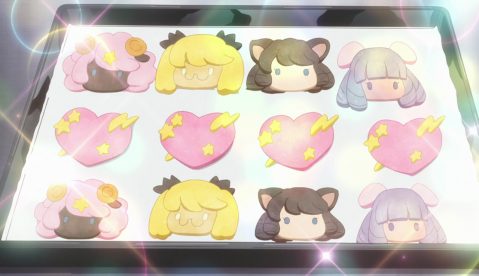 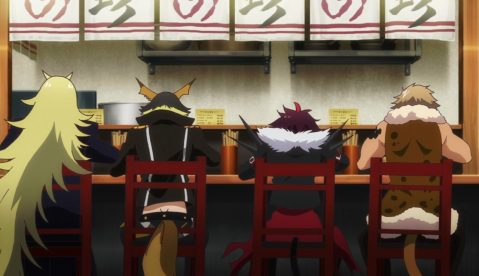 However, after arriving at the Sweet Sweet Girls Fest she gets discouraged pretty quickly, especially when she runs into the booth of the band Dolly Dulci. They are a brand new band introduced this season, so lets go into a bit of detail about them! The members of Dolly Dulci are apparently a small but successful band, and have been for many years now. They base their look on the lolita image, and are dedicated to love songs and sweets as well – their dream is to eventually found a cafe where patrons can come in and eat delicious desserts and listen to their music. In other words, Sweet Sweet Girls Fest is practically made for them to strut their strengths.

There are four members: the lead singer, a lop-ear rabbit named Candy Lapin who loves cute things; the guitarist, a chocolate-loving, serious squirrel named Chokiyurui; the bassist, a sleepy bear (who apparently even dozes off at times in the middle of performances) Cream Teddy; and the drummer, a pig who loves hot guys named Pig Macaron. Pig showed up several times in season one of the anime, by the by, often amongst the fans in the audience cheering on Trichronika and other all-boys bands. Dolly Dulci’s booth is nothing short of incredible – these four girls can BAKE, and poor Chuchu is mortified. 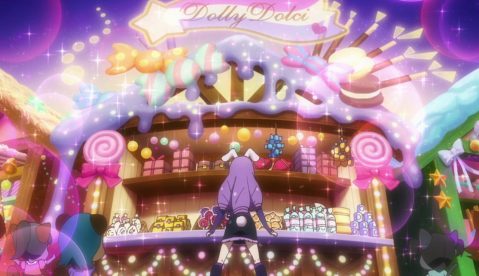 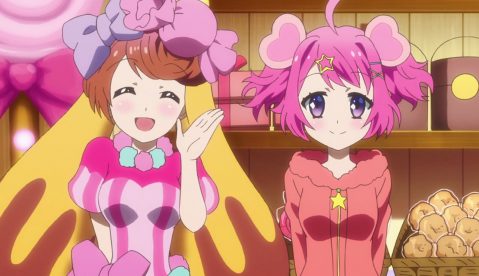 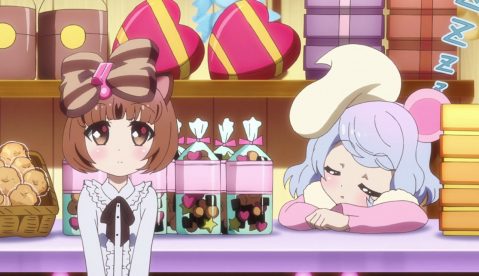 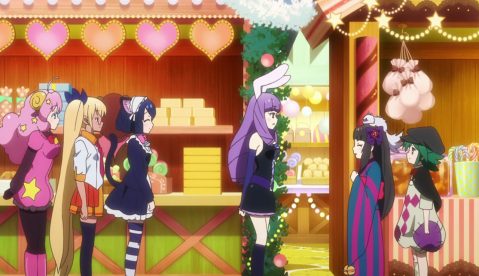 While heading back to their own booth Criticrista begins performing and who should the members of Plasmagica bump into but MariMari and Tsugihagi from the band Shinimonogurui! They are not there to perform but to participate in the festival. For those who do not remember these two, they appeared in season one in episode 7. (Tsugihagi in particular had been captured and forcefully turned into a Dark Monster and was eventually defeated by an extremely hyped up ShingancrimsonZ.) Both Dolly Dulci (they seem to be fans of Plasmagica, interestingly) and Shinimonogurui visit the Plasmagica booth just as Chuchu is letting go of her stressed out competitive edginess thanks to Cyan’s gentle kindness (of course!) and the cookies are decimated in a very short space of time.

However, all is not keen and peachy in Midi City. As if the whole shbang with the Queen of Darkness, BudVirginLogic and Dagger were not enough, at the end of the episode we are introduced in more detail to a boys band who seem to have targeted ShingancrimsonZ for some bizarre reason. Since they are yet another new band we should introduce them all as well; Arcareafact. They are part of the same record label as Trichronika, interestingly (named Judas) and all the members are incredibly wealthy and most are extremely arrogant to boot. 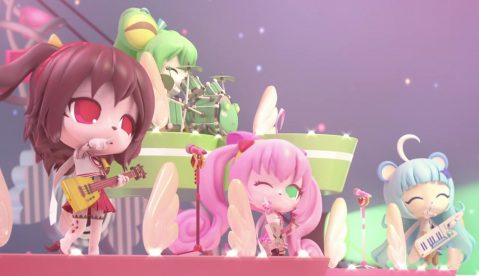 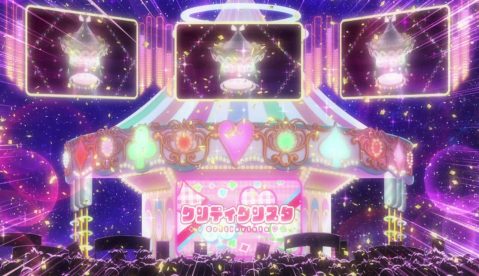 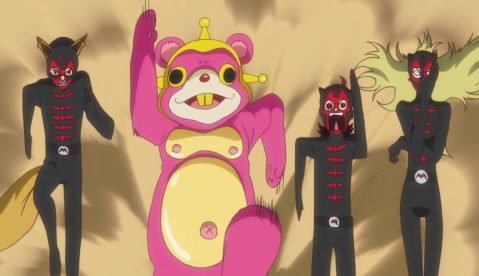 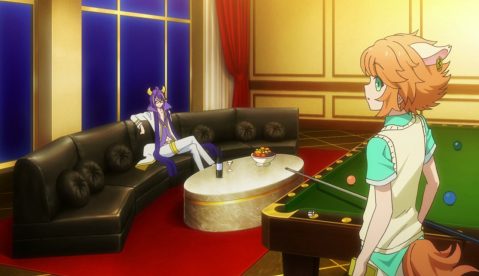 The lead singer is also their keyboardist and songwriter, it seems, and is a “blue unicorn” (well, they have mermaids in Sound World, so why not unicorns?) named Titan – he is a very intense and stoic appearing individual, but is also extremely competitive. The leader of the group is a bison named Orion who plays the violin, and seems a rather ruthless individual given throwing money at thing and watching the results. The bassist is apparently based on a soft lamb, and is named Selen – he is the son of the president of a major music label and a bit of a trivia expert regarding bands over the years. Finally, the heavily muscled drummer is a … gazelle of all things named Argon, and was the founder of the most successful company on the planet before joining the record label Judas.

Why this group of individuals are so interested in ShingancrimsonZ is beyond me, but I must admit after this episode they already come across as extremely distasteful and I would love for them to be “put in their place” a little. Don’t they have better things to do? :\ Well … with two new bands and the parameters for the story now set up, the preview for the next episode showed … something like tv competitions? Swimsuits and swimming pools and silliness seem in the wings … did Plasmagica do these things before now? Hmm … I could totally see Criticrista doing things like that, though (i.e. television appearances, commercials, etc.) so maybe their joining BRR and bringing their work history with them is unexpectedly opening doors for Plasmagica and ShingancrimsonZ? Nothing to do but wait and see! ^^