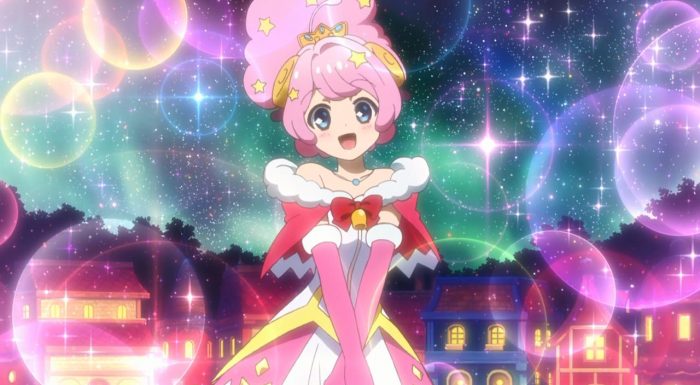 Pyururururu? Pyu pyururu pyuru pyurururu pyuru pyuyurururupyu. Pyuru! Pyururu Pyu pyuru?… Oh yes, please excuse me for that – was thinking aloud about the episode and pondering a few things. XD In all seriousness, though, the second episode of Show by Rock!! 2 aired the other day and was as delightful as ever, focusing on two major elements to the story – the return of Cyan to Sound World (thanks to the robot, who name is Kamui and is apparently a full fledged member of Ninjinriot – I wonder what instrument he plays?), and the unexpected visiting of Moa’s home planet and its inhabitants. Both were delightful, of course, but it was the second half that carried with it the most surprises, in my opinion. 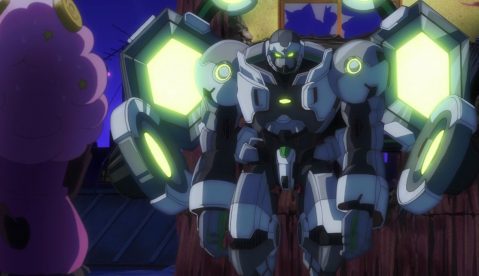 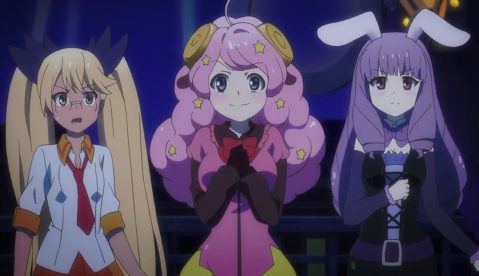 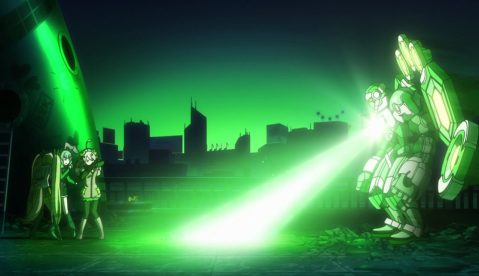 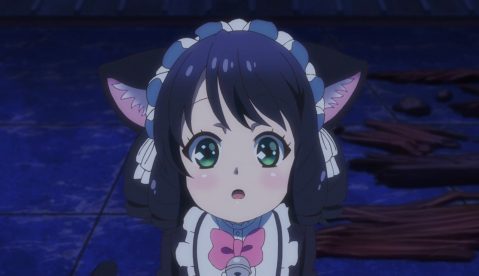 The first half of the episode, then, focuses around the return of Cyan to Sound World. Apparently Kamui digitized Cyan and stored her away inside of himself and then hopped across the dimensions to Sound World. After arriving and smashing up the BRR building quite nicely, – much to the annoyance of Maple, who might have been rudely awoken from his sleep – he “re-assembles” Cyan, who appears in her familiar myuumon nekomimi gothloli form, much to the delight of both her and the other members of Plasmagica, who had come to the roof to see what the huge crash was. (Of course, Moa’s rocket is right there on the roof, so she just had to open the door of her room to look out.)

After some adoration and delight amongst all Plasmagica members involved down in Angelica Cafe Kaimu introduces himself and says “Farewell!” when Maple confronts him with the building repair bill and demands he pay it before leaving. Kamui escapes in ninja-like manner (much to Maple’s horror) and Chuchu, Moa and Retoree all escort Cyan to her old room (which has been kept unchanged since her departure) where they touch base about what is going on regarding the Queen of Darkness, Dagger reappearing with the members of BudVirginLogic at the concert the other day, and where things stand as far as they know at the moment. All is well and updated and the “Huzzah!” to practice their music to defeat their foes is (sort of) raised when … something unexpected occurs. 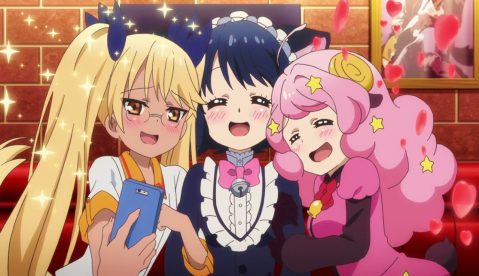 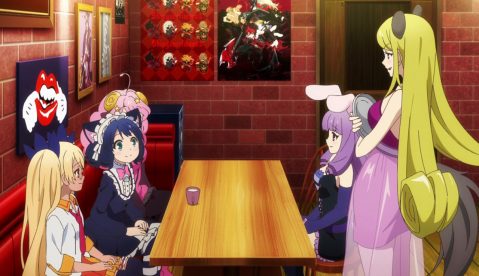 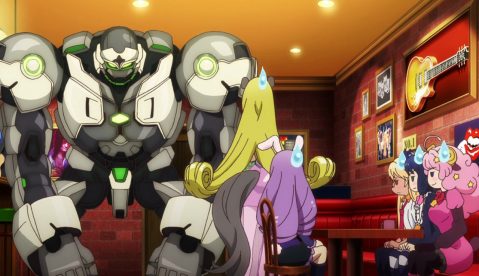 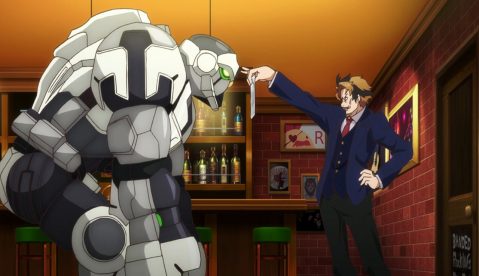 This is where the second half of the episode takes place – where we see that as a result of Moa slacking off on sending her Investigation Reports she has been ordered back to her home planet … immediately, with no ifs, ands or buts. In fact, after she gets the IM an escort shows up outside the building (basically saying NOW!) and to say that Moa is crestfallen would be an understatement. However, the other Plasmagica members, Maple and Angelica all decide to go with her and be there for her and hopefully support her in being able to make a speedy return, and Moa is delighted. Moa’s retro sci-fi rocket operates by voice command (and antennae – we saw that i season one) and zooms everyone off to her home planet in an incredibly quick manner. It is on their arrival to the planet that a surprise unfolds before the viewers.

Essentially, Moa is the Crown Princess (!) of the planet, who volunteered to be an investigator to see what life was like outside the palace. When this was revealed I slapped my forehead and thought “Of course she is! How could it be otherwise? How could I not have anticipated such a thing?!” It turns out that the Pyururians are advanced in technology, but are low on energy resources, and the investigators were sent to other planets to discover possible resources. Sound Planet’s music and the melodisian stones of the listeners turn out to be a source of energy, which was unexpected – I had not considered it being made use of “objectively” like that, but in retrospect that seems precisely what the Queen of Darkness herself is conquering Sound Planet to obtain, so it makes sense to see it shown here. 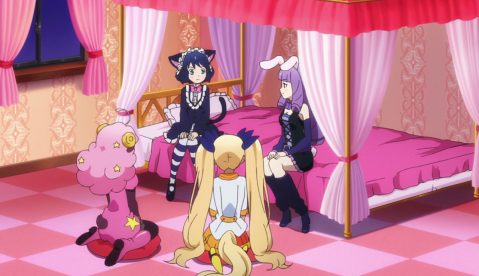 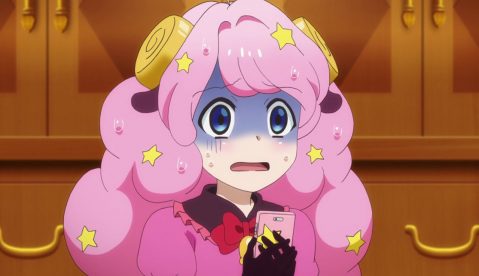 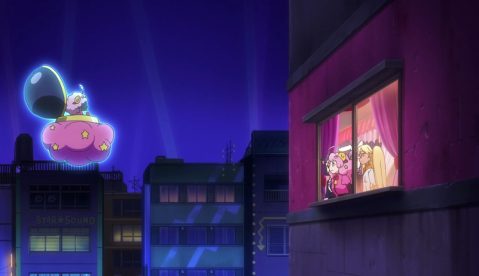 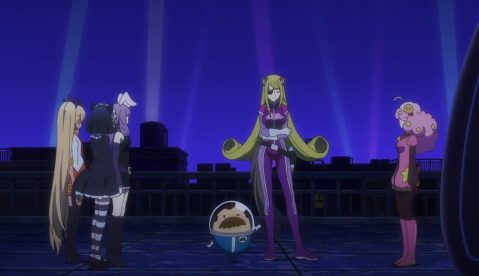 In case anyone was wondering yes – the diminuative space sheep Pyururians communicate in a verbal way entirely through the sole syllables “pyu” and “ru”, although there are some of them that can speak other languages, like Moa’s parents … well, one would hope the King and Queen could speak other languages, after all. But there was one moment when throughout the entire time Moa and the Investigator Council were arguing, there was pyuru’ing in the background, reminding us of how they were actually communicating. I thought this was a nice touch, and reminded me of those times when I have seen simultaneous translation when talks were going on in other languages – it was well thought out, I thought.

The evening before Moa makes her defense before the Investigator Council a welcoming party is thrown for the return of the Crown Princess and her friends and among other things we are shown an example of the planet’s cuisine (roasted giant spider-crab-something-or-other) and its’ music and … well … after listening to the performance … its no wonder there was an energy shortage. (And no wonder the musically inclined Moa went to Sound Planet!) Anyhoo, on showing the people of the planet the results of her investigation through a concert performance by Plasmagica Moa is exonerated and permitted to return to Sound Planet to continue her assignment. 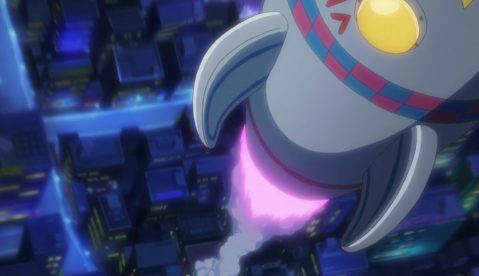 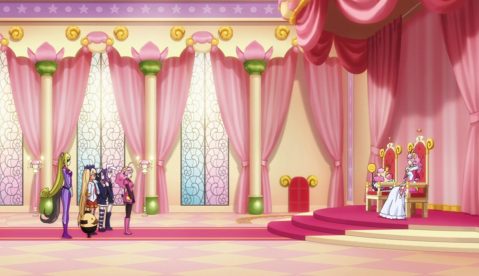 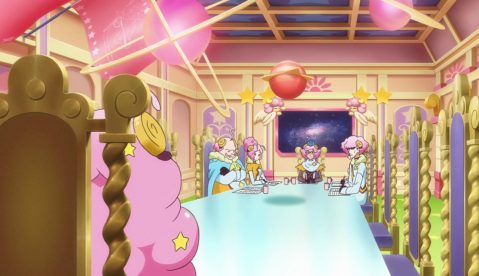 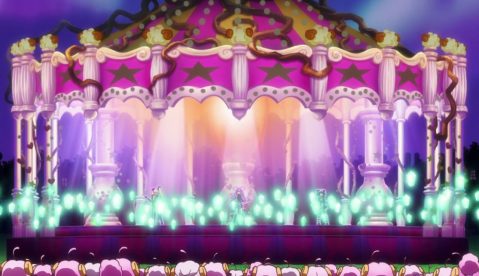 As far as that goes this is an “and they all lived happily ever after” kind of ending for Moa to remain in the band when the band needs her, but it was also an opportunity on many levels. First of all it gave some nice character focus on Moa proper, but while doing so it also drove home a few things the first episode stressed. First and foremost, this is taking place in an entirel Galaxy, which means other races and civilizations are also potentially endangered by the threat of the Queen of Darkness. But at the same time it also means there are more potential allies. I would not be surprised over the course of the next few episodes if the traveling bands (briefly shown in the first episode) “recruited” help.

Whether this were to come from other planets (AKB0048, anyone? If you remember in episode one Trichronika was shown traveling through space) and other cities on Sound Planet proper (Tsurezurenaru Ayatsuri Mugenan was shown traveling in a large desert, if you remember) to generate a unified resistance to the invaders. In fact, the next episode looks like it is going to focus again on the band Shinimonogurui located on Youkai Street again. I wonder if “recruitment” will go on with the youkai? One of the aspects of the series I was hoping would be touched on future seasons of the series was precisely that of world building … not only the other major cities of Sound World, but also the people living therein. 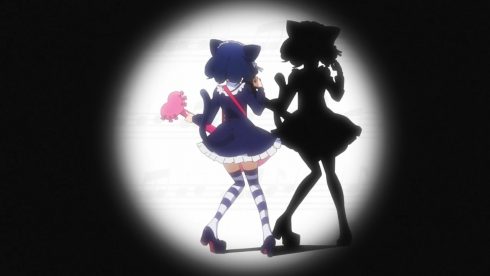 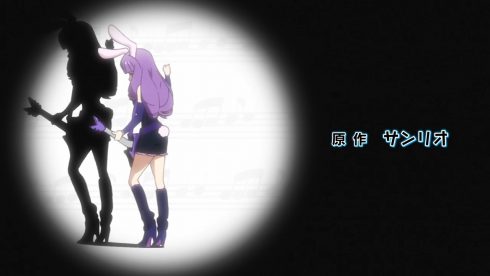 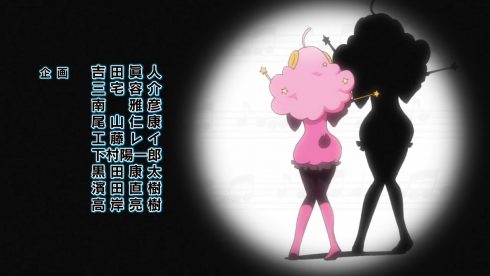 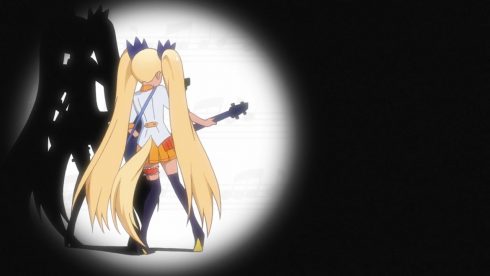 There is one other thing I feel should be mentioned, and that is the revealing of the OP for the series, which is called “Heart wo ROCK!!” and is once again sung by the girls of Plasmagica. In one swell foop this became my favorite OP of the season thus far, partly thanks to the extremely effective visual accompaniment by Bones Studio. Was anyone else reminded of music from the 70’s? This finger snapping, foot tapping, body bouncing and rocking to and fro beat really gets in your head, and the singing is incredibly cheerful, playful and energetic. (Would love to find some lyrics for it.) This is definitely an improvement on the OP of the first season in my opinion! I can’t wait to see it performed in the episodes themselves. ^^

Well, that’s enough cheerfulness for now – as you might guess I am enjoying this series a lot (it’s so nice to visit them all again!) and am happy to be blogging it once again. Please do join in on the watch and next week’s episode as well! See you then. 🙂 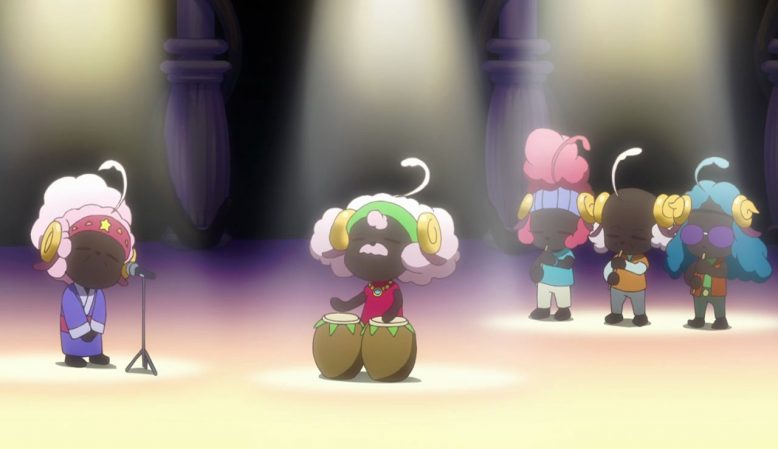 The traditional music of the Pyururians was … unforgettably unique.