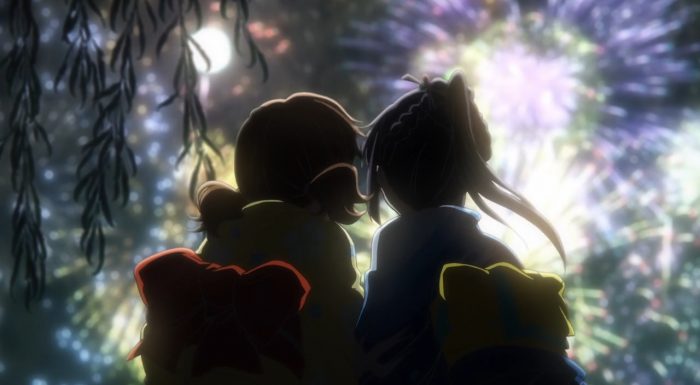 Some shows come out strong right out of the gate and that’s the case with Hibike! Euphonium. Not only did it come with an hour long first episode, but the show really just jumped right in. This episode was basically everything that you expected and got from the previous season. There was a ton of drama, characters dealing with complicated emotions, and yeah a fair amount of ship teasing. Although at this point I can’t even call the scenes with Kumiko and Reina ship teasing. At this point it feels more like we are just waiting for these two to officially start dating XD. 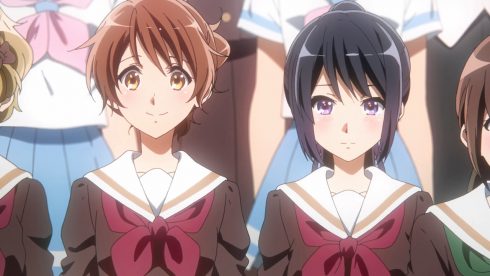 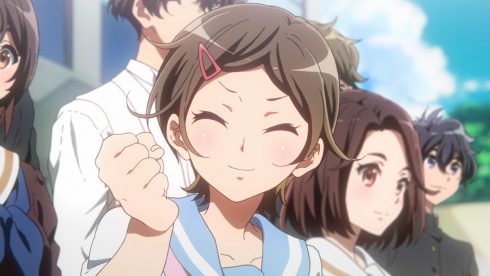 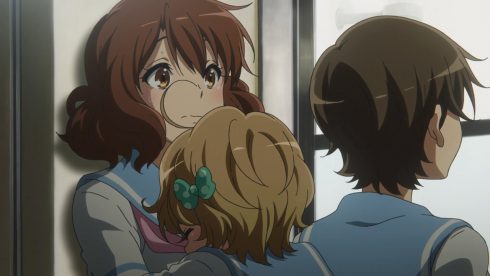 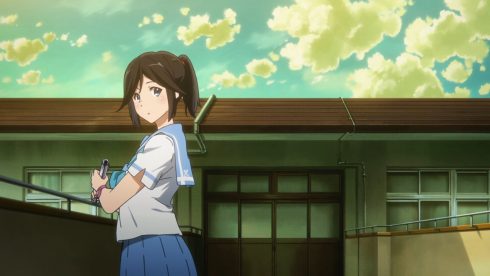 But really the big part of this episode was continuing the strong drama. Even though the cast had finished first and qualified to move into future competitions there is a lot going on. A lot of that is thanks to the second year Nozomi making a push to have Asuka (the vice-president of the club) accept her request to return. Clearly Nozomi is one of the girls who left the club last year during the incident. Honestly I did wonder if we would start to see people asking to come back. They showed some real capability in getting this far. Suddenly the club has shown success and that could fire people up who gave up on the club.

Of course there is a lot of complexities to this. That incident hasn’t remotely been resolved or forgotten. It feels more like everyone has shoved it under the rug. They are just refusing to look at it and deal with it. It isn’t a simple thing for someone to just come back to the club. Even if Nozomi isn’t looking to join the competitions there are issues. Although I think another thing is Asuka is just plain annoyed that Nozomi is going to her to ask to join. She is right that it isn’t Asuka’s decision, it is the club president’s decision. Going to her is just putting Asuka in the position that she doesn’t like to be in. 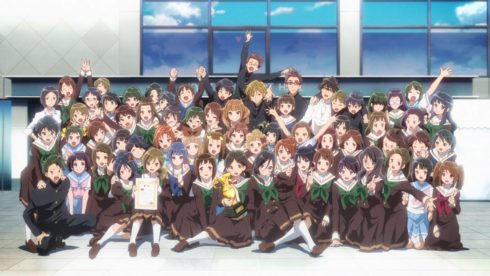 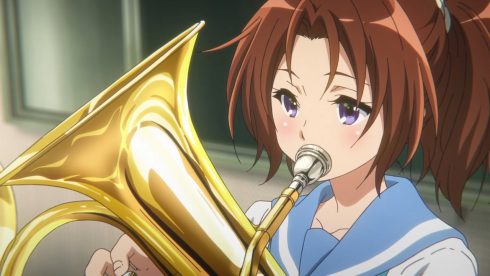 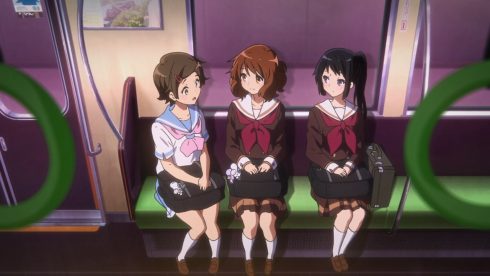 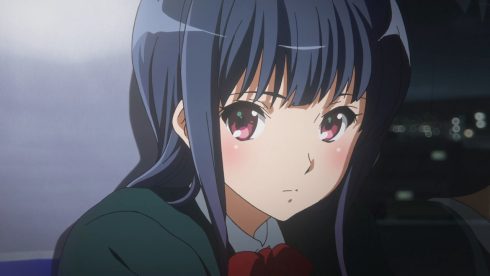 The whole situation is pretty awkward for the first years. The second and third years have really allowed this to become a problem. Even if they try to keep pushing the first years away when they talk about this, all they are doing is creating distance. That isn’t going to help the unity of the band and frankly isn’t resolving the issue either. Nozomi is still going there every single day to ask Asuka about joining the band.

There is a lot going on here that makes the situation more complicated. Yoroizuka Mizore (the oboe player) may be the key person in this immediate situation. That actually hearing her ‘friend’ playing the flute made her feel ill says a lot. Instead of asking Asuka about joining I wonder if she shouldn’t be talking to Mizore first. There might be a serious feeling of betrayal at work here. That Nozomi promised they were going to go for the gold in high school and then when things got chaotic in the band…she quit. It might explain the dry sound Kumiko heard in her performance. Maybe Mizore has tried to shut down her feelings and interactions with others and it has affected her ability to play as a result. 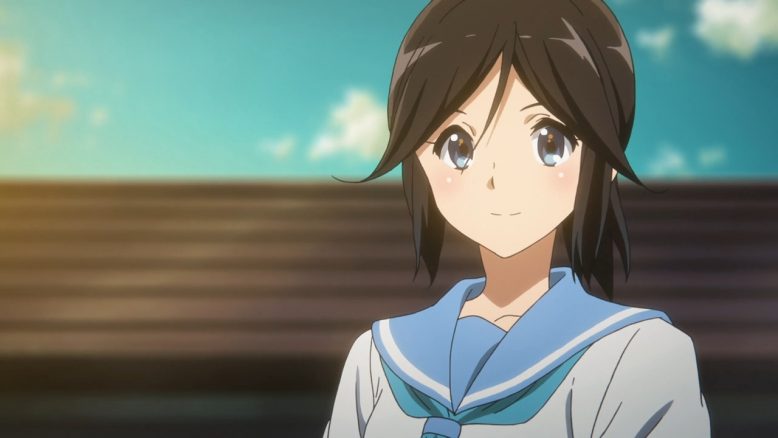 A storm is coming

I somewhat agree with the stance of Asuka and Reina. For the time being I’m not sure Nozomi should rejoin the band. Even if she isn’t trying to get into the performance group, people coming back at this point could be too disruptive. How much could she really contribute when you balance that against how others might not want her back? Although when it comes to the running away part…didn’t everyone run away? The issue in that group hasn’t remotely been resolved yet. Those that left and those that stayed, both were frankly running away from seriously competing. Although you could say those that outright left did indeed quit on the idea of ever competing or really improving their performance.

If there is any positive to this Nozomi situation is that it might help shock the group out of their passiveness. The additional instructor for the band made the point clear. They are a very quiet group that doesn’t speak their minds and it is reflected in how they play. In a sense they aren’t willing to push their opinions forward and have their music stand out. They might be able to get to the Nationals if they can’t stand out enough. Playing well is hugely important, but having some confidence in your performance could make the difference between two equally good schools. 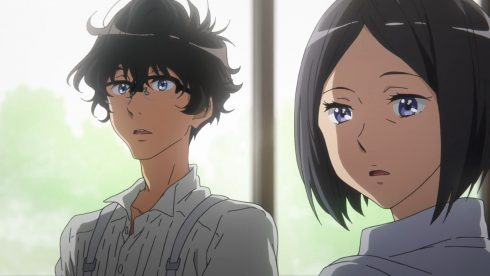 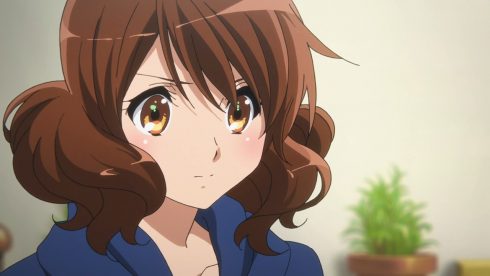 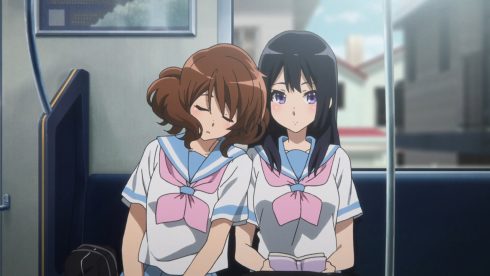 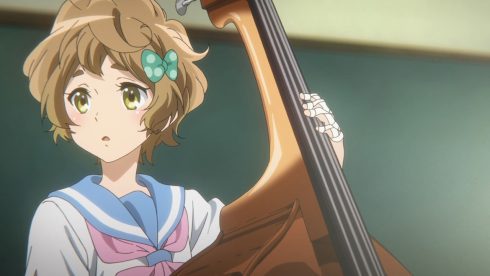 The main cast are a likable bunch as always. Kumiko is still blurting some things out while easily getting distracted by the drama in the band. Not hard to believe considering how she gets to see various scenes of drama. Good on her for going to school earlier and pushing herself a bit. Kumiko really isn’t a morning person, but she’s still getting there bright and early with Reina. As always it’s remarkable how disinterested she is in her childhood friend. That guy barely gets any attention and when he does…she’s usually not giving it to him.

On the other hand the show is still pushing forward strong scenes with Kumiko and Reina. Call it ship teasing, but geeze there are times when I think they should absolutely go that route in the show. They have pretty good chemistry, spend a lot of time together, and there is certainly a level of attraction felt on Kumiko’s side. They probably won’t, but I do think it has some potential if the show wanted to go there. Certainly not much would happen unless Reina decides to give up on her teacher anyways. Although I’m not sure how that could be considered viable. 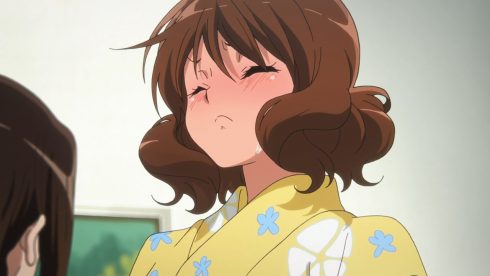 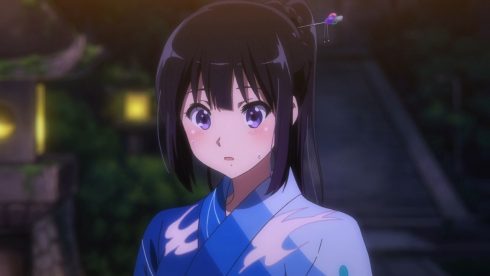 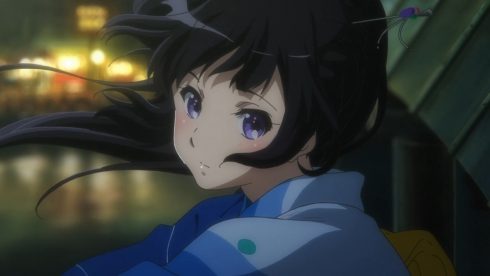 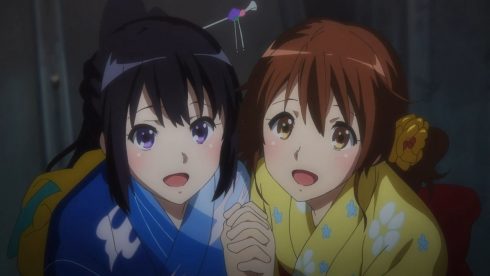 If nothing else the fireworks was a good bonding scene with them. That friendship has been getting stronger as the series has gone along. It’s nice that Kumiko can bounce some of her thoughts off Reina instead of simply bottling them all up. Reina as always has really strong opinions, but that isn’t a bad thing. She has learned as well from her experiences in the first season and had to face trials. If nothing else they’ve become so close that Reina wants to continue hanging out with her and going to these sorts of events again in the future. Kumiko as well has become confident enough to tease Reina on occasion and open up.

On the other side we have the existing drama with Kumiko and her sister. Who knows what kind of mixed feelings there still are between them? I wonder what her sister really thought about Kumiko’s school winning that competition. She gave up on playing music to focus more intensely on her studies and it seems to have paid off. But here is her sister not having followed the same path and now going somewhere she never could. Plus you have Kumiko who I think has some frustration towards her sister for getting her interested in music and then quitting. Bound to be a blowup there at some point and perhaps more likely from Kumiko towards her sister. 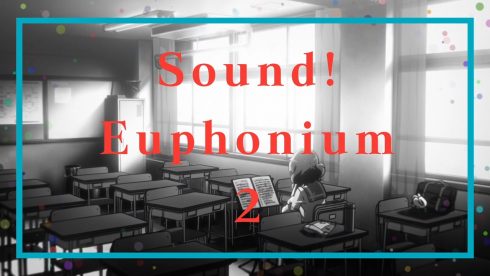 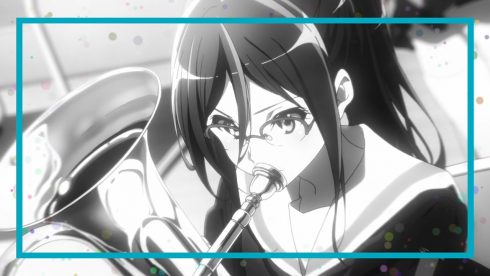 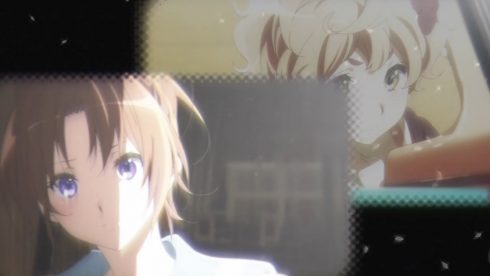 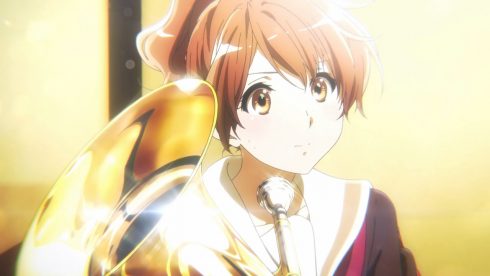 This was a pretty fun OP overall. It had a lot of energy and passion in it. I somewhat like the first season’s OP more, but this is still really good. It gives fair attention to a variety of characters which isn’t easy considering how massive the overall cast of this show is. It has a strong song that I enjoyed listening to, especially after a few times. Just a nice series of shots including the previous season, a future competition, and various members of the cast. They are all in this together and this OP leaves me hoping they’ll have a good adventure. 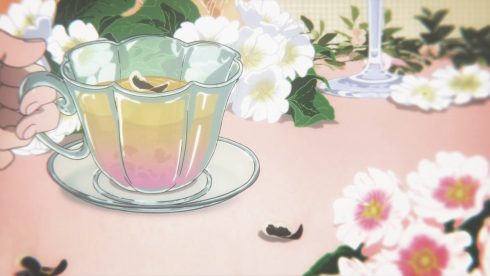 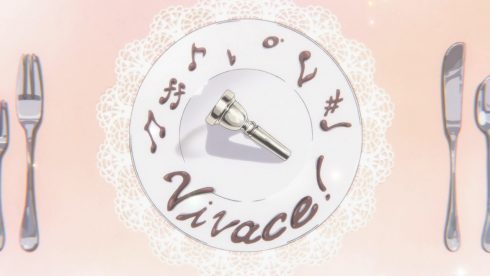 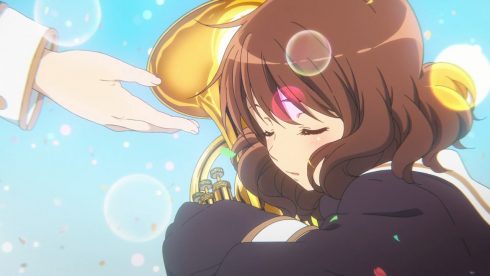 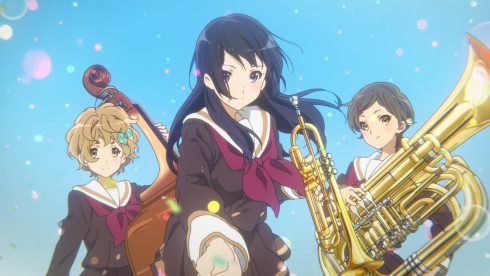 The ED was solid and energetic. It had a fair number of visuals that were fun to look at. The most interesting part of it was showing Mizore for a short moment. The only person that wasn’t one of the main four girls shown off. It definitely seems to point to her being a major player in this coming season.

I also like how the visuals just seem to say that these girls care more about music than anything else. Kumiko actually embraces her Euphonium when she finds it. There was also a nice scene of her turning away from cakes and preferring to receive her mouthpiece. A cute and fun ED. 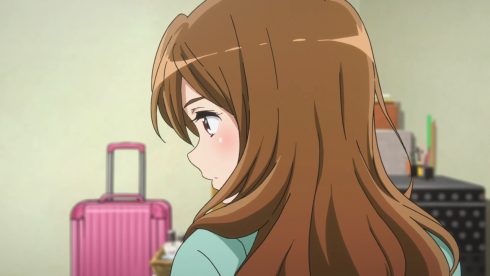 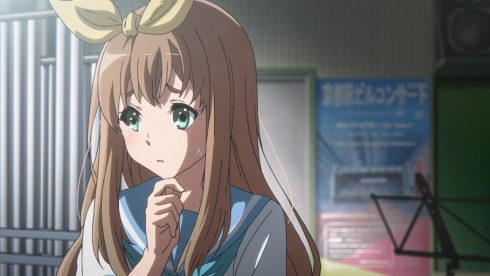 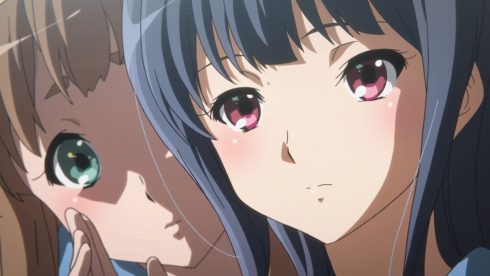 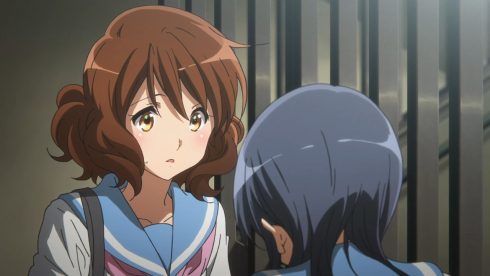 This was strong start to the coming season. I feel pretty good about how this show might turn out. It is a series that is heavy on the emotional drama and that can be tough to go through. I’m not entirely sure if I’m going to pick it up for the whole season, but it is a strong contender. This show has some really good characters and knows how to provide drama in a way that doesn’t feel ridiculous. It will be interesting to see how people have changed from this big (and very appreciated) first episode and the last episode of season 2.