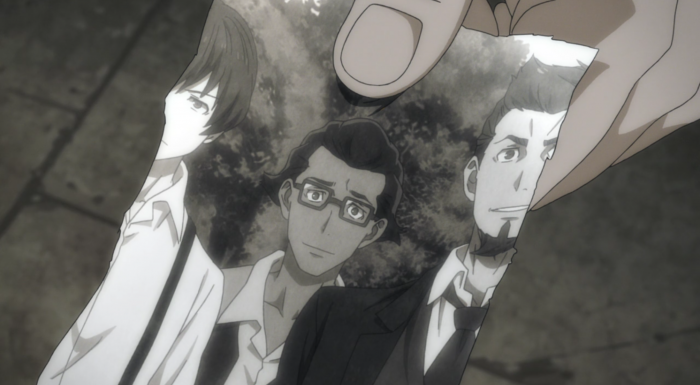 We’re looking down the barrel of our final episode, and as expected of a show that keeps using lines from Shakespearen tragedies as its episode titles, everything is collapsing right on schedule. Since the vacation put me a week behind, you’re getting a double whammy of commentary this week, and fresh off an Episode 10 rewatch, too! Everything is terrible! Let’s talk about it.

I frankly don’t have time to recap the entire plot this week, which twists and turns with its usual speed (arguably cramming too many new angles and players in too late in the game, but meh, it worked for me), although maybe not its usual unpredictability. “Proof of Good Faith” has its conclusion practically built into its title, and the episode marches forward with a kind of gut-wrenching certainty. Even the early, heartwarming moments of Angelo and Corteo living a normal life, with Angelo smiling honestly and eating with gusto for once, feel like a ruse, a game of pretend that even our characters know can never last. 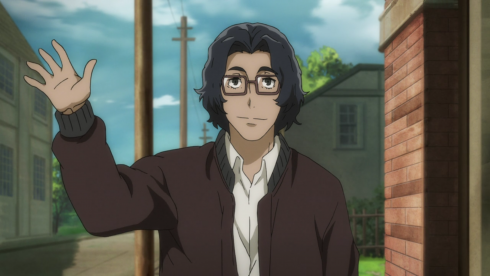 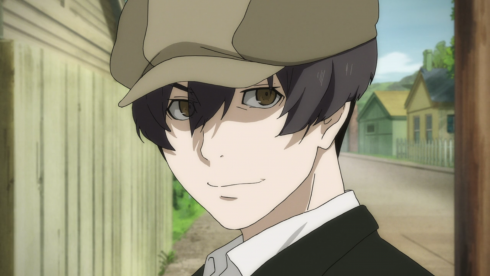 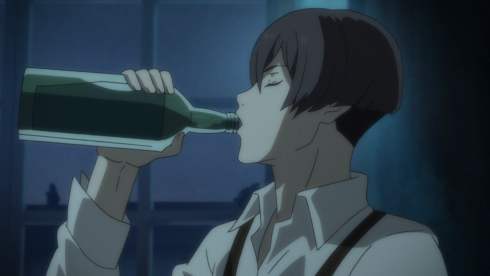 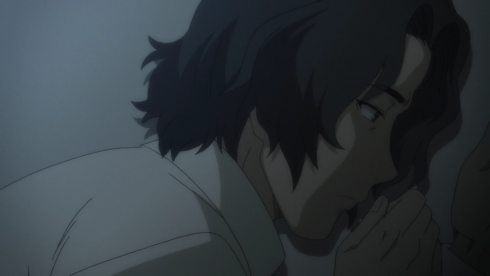 Insomnia and liquor have become visual shorthand for conscience and crime, so when Angelo and Corteo lie awake at night, Angelo drinking deep from Lawless Heaven, we know this pretend domesticity can’t last. Corteo might be able to dump his stash of booze–symbolically severing himself from the crime world so he can “start over”–but Angelo can’t let go of his revenge. And as long as he can’t walk away, Corteo can’t, either. We know this. But damn, that doesn’t make it any less painful to watch.

It’s probably for the best that I waited a week to talk to you about this episode, because my initial reaction to it was passionate and visceral and my commentary would’ve amounted to a string of sad, angry reaction gifs. Corteo may have stained his hands with blood and deceit, but he was loyal and kind, the only character (besides Fio) who acted to protect an actual person instead of working for some abstract goal (family, vengeance, etc.). It’s utterly unfair that he doesn’t get to walk away from this. It’s also, perhaps, the only way he can “save” himself from his crimes and clear his conscience, too.

Corteo washes his hands of Lawless Heaven and doesn’t hesitate to throw himself to the wolves if it’ll save Angelo. No one’s getting out of here with their innocence intact, but Corteo manages to die nobly, at peace with his final actions. Maybe that’s the best anyone can hope for in this world. The gangster genre revels in tragedy and routinely breaks my heart (Boardwalk Empire Season 4 finale, anyone?). But then, maybe that promised catharsis is exactly what draws me to it. 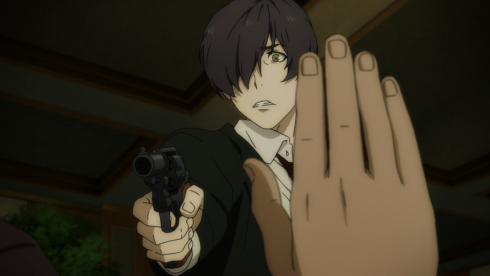 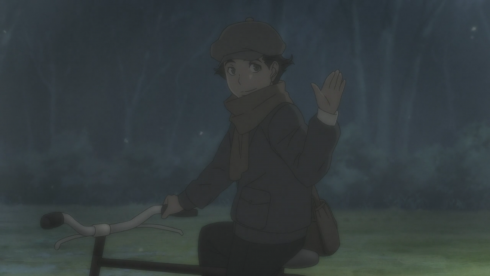 91 Days has made its Macbeth ties clear through multiple episode titles, but its story has always more closely mirrored Hamlet–a boy pretending to be someone he isn’t in order to avenge (a) death(s) in the family–so a part of me had hoped Corteo might go the Horatio route and actually survive the impending blood bath (er, spoiler alert?). But, I think, as soon as he decided to order a hit on Nero (and eventually killed Fango), he shifted from a Horatio to a Banquo: a co-conspirator who actively participates in murder and is therefore doomed to be a part of the violence rather than an observer of it.

This becomes chillingly, heartbreakingly clear in “All For Nothing,” as Angelo suffers from the emotional fallout of murdering his own brother. He’s exhausted and broken, returning to an empty Blue Room (one of the show’s most haunting recurring images) to share a drink with a smiling ghost and wonder for the first time whether his revenge is even worth it. “Banquo’s ghost” haunts Angelo just as it did Macbeth, but here he’s reimagined not as an accusing specter but as a sad sentinel, watching over Angelo to make sure he gets the job done.

And what exactly is that job? Based on Angelo’s decision to kill Don Galassia and essentially start a war between the two major crime families, it seems to have shifted: Rather than just take out the four men present at his family’s murder (Ganzo was probably on the hit list from the get-go, but luring Corteo back to Lawless seals his fate), Angelo seems to be gunning for the entire underworld now. Well, Corteo did hate the mafia. Maybe this is Angelo’s way of helping his other brother find peace, too. 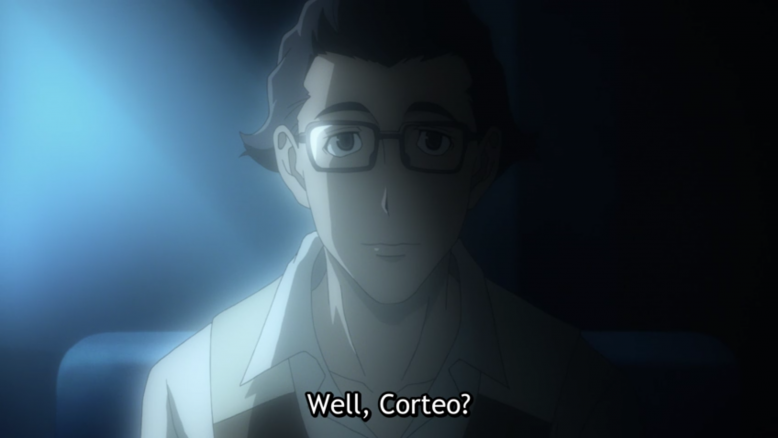 This is the single most heartbreaking image of the season, and this season has “orange” in it, for Pete’s sake.

On the other side of this warped mirror is Nero, someone else who began as an innocent and has been slowly corrupted and destroyed by the violence around him. As much as I loved (sob!) Corteo, it’s hard for me to fault Nero for ordering Corteo’s execution. Perspective matters, and from Nero’s perspective Corteo was a traitor who tried to have him killed. Motivations aside, there’s no way he can let that go.

We can argue about the finer points of why he ordered Angelo to do it, but given that Nero doesn’t have a deceptive bone in his body (his gullibility continues to spell his downfall, as he trusts both Angelo and Ganzo without question), I think he truly believed he was doing it to help Angelo: to clear suspicion once and for all and solidify his place as Nero’s right-hand man. Both Angelo and Nero refer to Angelo as an “empty shell” in these two episodes. Angelo says the letter gave him purpose; Nero promises to “give him something to live for.” It’s Dramatic Irony 101, but it also speaks to Nero’s sincere trust and affection for Angelo–a trust that’s promptly shattered once the bullets start flying this week. 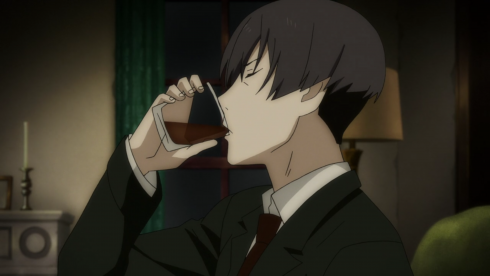 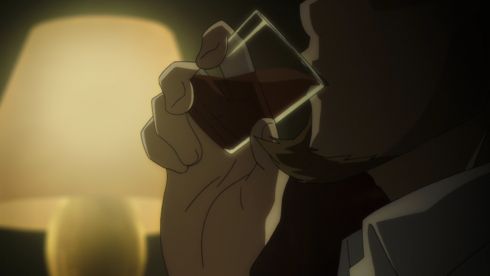 As 91 Days‘s official art suggests, Nero and Angelo have become reflections of a sort: Both have killed a “brother” due to the other’s machinations (the huge difference of course being that Frate tried to kill Nero while Corteo tried to save Angelo), both have watched their fathers die, and by the end of this episode it seems likely they’re both out for the other’s blood. “All for nothing” is a line found in Hamlet, so it’s fitting that this week ends with two sons ready to avenge their fathers (and, if that cover art is any indication, “to cut his throat i’ the church,” just as Laertes promises.)

Sadly, not a beat of this is new. Shedding surprising light (and potential foreshadowing?) on our story is Vincent Vanetti, who, on his deathbed, reveals that he might have some humanity left after all. He regrets killing Angelo’s father, his “best friend,” and wonders if there wasn’t “another way.” Of course, by now Nero has become such a perfect, parroting replica of his father that he assures him he did the right thing because protecting “the Vanetti name” matters more than even friends and brothers. Despite Vincent’s regrets, the way he’s raised his son ensures that the violent cycle he inherited will continue into the next generation and on. 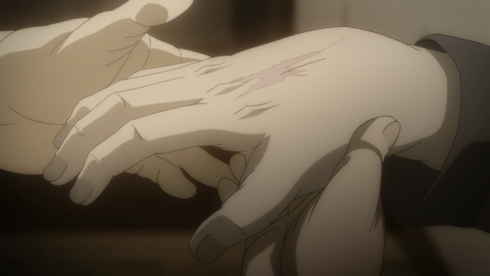 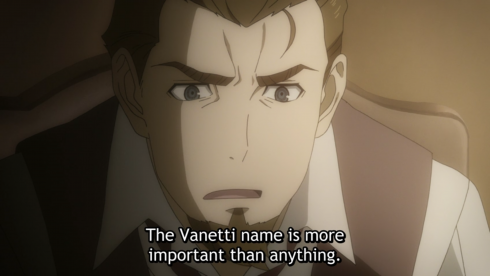 …Except, will it? I can’t shake the feeling that 91 Days told us Vincent’s story for a reason, and Barbero’s insistence that Nero could never kill Angelo still sticks with me. I’m not sure either Angelo or Nero “deserve” to walk away after everything they’ve done, nor am I sure either of them (especially Angelo) actually could. Maybe the best we can hope for is that they take each other out so the chain of vengeance dies with them. But I’m still not sure that’s how this story actually wants to end.