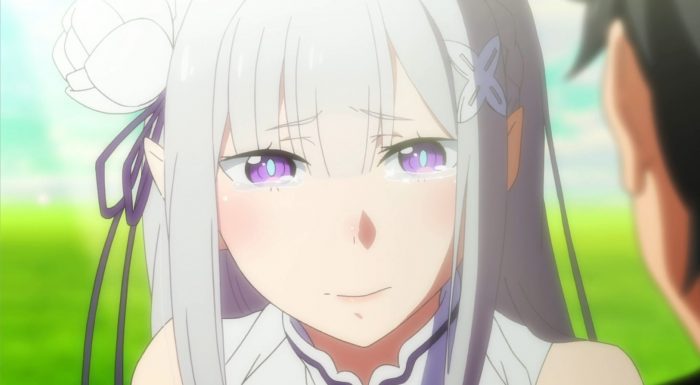 Well if nothing else the last episode was a strong one. Never a bad thing when a show can finish on a well done episode. Good visuals, storytelling, and everything just coming together. On the other hand….episode 18 happened. Seriously if you cut that episode out and maybe one or two surrounding it, this is a beautiful ending. Looking back to the second arc and the good moments Subaru and Emilia had were really nice. It all lead into this strong ending. But unfortunately that episode happened and at least for me that kind of just taints the beauty of the last episode.

In some ways it feels kind of hollow. Emilia just never gets a chance in the story to step up. She’s always the princess in the tower that needs a prince to save her. Which sometimes can work in a story, but not necessarily in this case. Emilia needed more chances to do something, but is constantly held back. Other characters get chances to do something because apparently not being the heroine makes that ok. This is still objectively a really good episode. Just unfortunately it gets somewhat wasted by the author’s earlier decisions. Also yes the rumors about this being an hour long finale was inaccurate. They still did a fine job concluding it with the one episode though so I don’t consider that a negative. 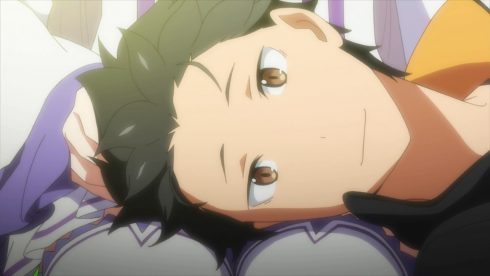 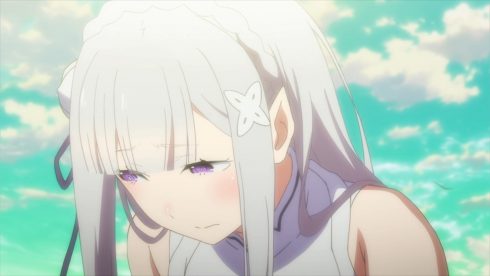 One thing that came to mind was potential pitfalls in the future. There is a fair point made by Emilia that Subaru from her point of view is constantly saving her and she is never able to do much of anything for him. Sure, we know and Subaru knows what she’s done in the past, but Emilia doesn’t. That’s an issue. If this just keeps going on and on will Emilia be happy constantly being the one saved? Might that create a feeling of inequality in the relationship? Subaru will always have strong motivations to save her especially after numerous deaths, but she’s never going to see what good she does do unless it’s in the perfect route. Those perfect routes being ones where Subaru looks unbelievably good.

Maybe it won’t mean anything and maybe the story will give her some good chances. I’d certainly hope Emilia gets chances to look good in the future. It just sounds odd for Subaru to say things about Emilia being overly reckless…when she never gets a chance to be reckless. Even in all the loops the only reckless moments she had was in the opening arc, if not simply the first episode. This may be one case where I have some concerns for how stable things will be if the status quo remains. 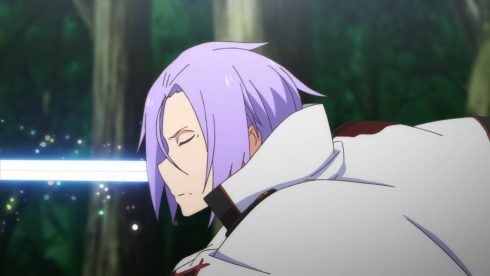 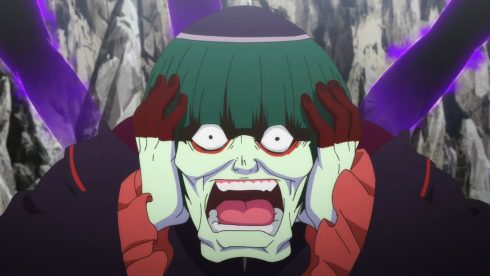 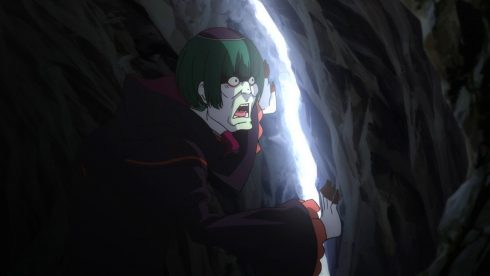 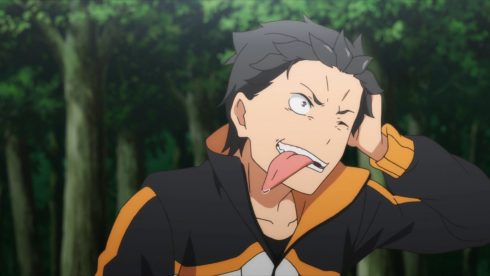 There is nothing bad to say about the first half of the episode. Although it seems the only real reason for Julius to take part was to build up their friendship. Which is fine, but it did seem dicey at times there. Took a while for Julius to adapt to this strategy and make the most use of it. Luckily he was able to pick it up before he took too many injuries. It was a clever move to make full use of the curse. Though Subaru has often made good use of that curse.

While the action was entertaining it was the creepy scene with the witch that was a real highlight. Just utterly amusing seeing Betelgeuse get shut down by Satella. Despite all the crazed efforts he isn’t the one she is interested in. Which kind of makes their whole plan pretty shaky. Seems like they just came up with that stuff on their own. 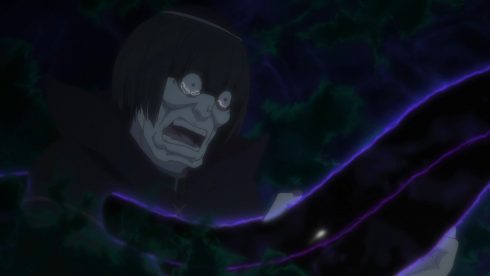 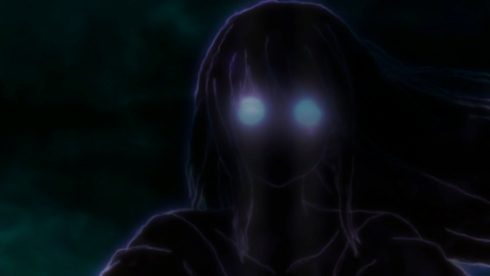 Though I think Subaru is being a bit naïve if he doesn’t see the crazy yandere affection Satella has for him. Bringing him from another world and basically making him unable to permanently die….that’s some kind of crazy love I think. And there is all kinds of speculation about her identity. That did sound like Emilia to me. Now the fact that they used that voice doesn’t mean they know the truth….but it’s possible they got the heads up about Satella’s identity. It would be interesting if Emilia really was either Satella’s reincarnation or the one who will become Satella. We’re dealing with time based powers here…Satella could be the future Emilia that went into the past. 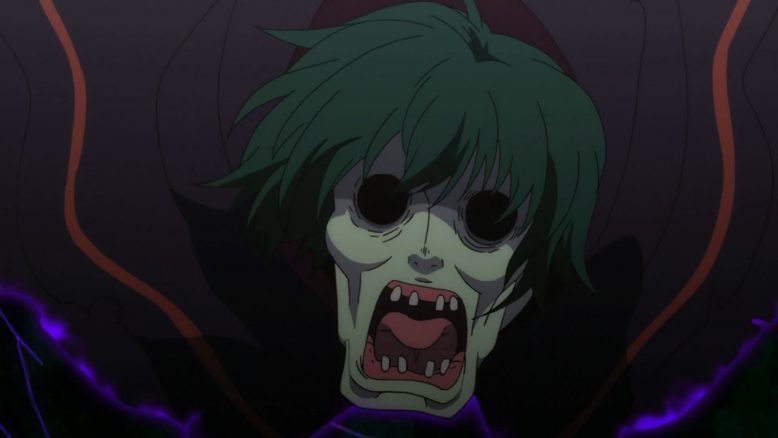 I’d never stop running away from that

There was a lot of amusing moments in the episode. I was kind of amazed how utterly crazed Betelgeuse really got by the end. I guess shattering his ideals and beliefs didn’t really leave him in a stable condition…basically a corpse being propelled by his power. Extremely creepy and yet also kind of hilarious. Was reduced to a state where Subaru was allowed to step up and basically defeat Betelgeuse. Getting the revenge that he had desperately sought a few loops ago. Of course like with any series he only really gets his revenge once he isn’t focused on it anymore. Nice move leaving him the fire spirit for that combo attack.

His power certainly does seem to come from Satella which leaves me wondering just what this character really wants. She’s not interested in meeting him when Subaru opened his mouth about his ability. Betelgeuse isn’t the one she wants. But those hands are so similar that it’s hard to believe she didn’t grant them to the cult. I guess this means she is just using them like tools and only really is interested in possessing Subaru? I don’t know. It’s a curious thing. 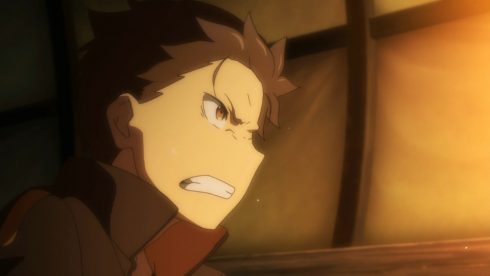 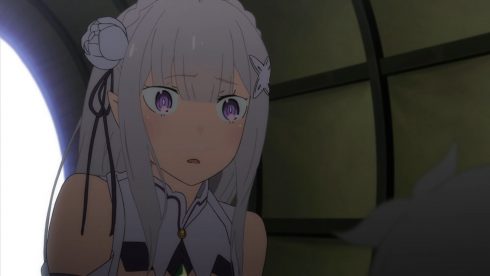 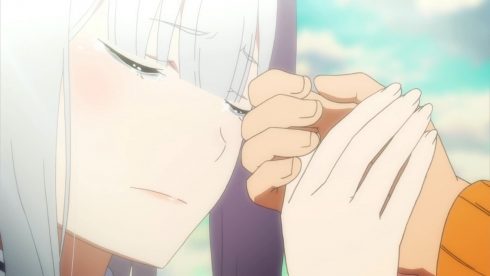 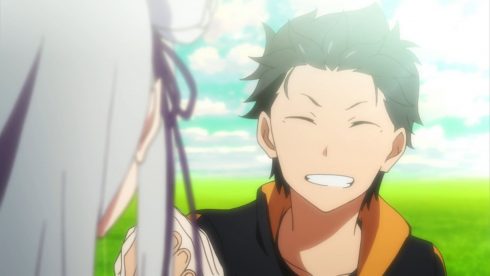 A very strong last episode when you just look at the last episode itself. Subaru finally opens up to Emilia and gets everything across. Using the white whale to block the explosion was a good move and glad he actually had a plan that wasn’t suicide. The scene with Emilia and Subaru if just viewed on its own was really strong. He got his feelings across, she accepted them, and everything is good. Of course it’s Re:Zero so everything isn’t good for very long, but for that moment they are in great shape.

Far as I can tell Subaru did it. He won over his heroine. And certainly there isn’t much real competition for him going forward. His victories through these arcs has really put him in a close spot to Emilia’s heart. They are bound to have trials and problems ahead…but at least that mutual affection should remain good and strong. (Now if I could actually enjoy that then it’d be nice, but such is). 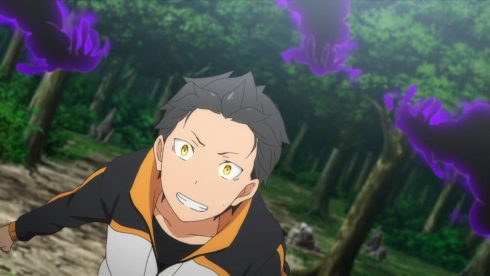 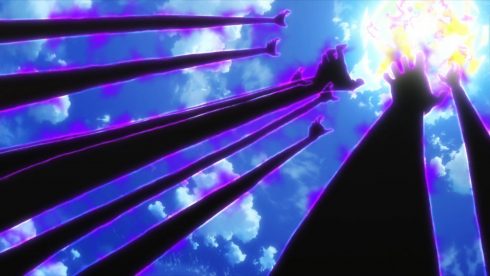 Re:Zero has been a ride. There is no way to say it has been anything short of a ride. A good ride, upstanding ride, a painful ride, a bad ride, it all depends on your point of view. I’d say for most of the show it’s been an interesting one. The first couple arcs were really strong and had some really epic moments. The fight against Elsa was great and overcoming her felt like a great adventure in itself.

The second arc and Subaru’s painful grind through it was still one I found myself pulled into. It did get pretty crazy at times, but I felt like the story held up well. Subaru’s trials and his emotional turmoil felt believable for any person put in his situation. His desire at times to run away was believable as was Subaru pushing himself too hard at the start of his victory loop. I found myself really pulling for him and wishing him the best in getting through it. 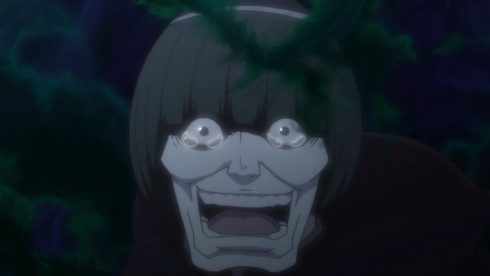 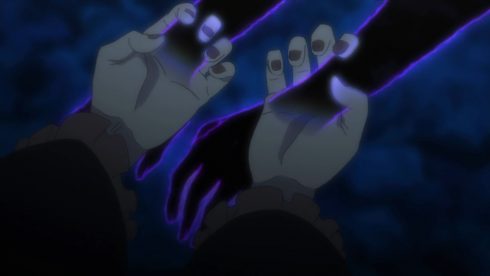 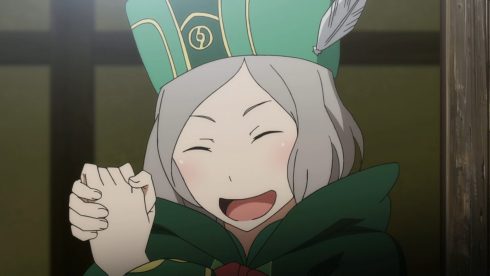 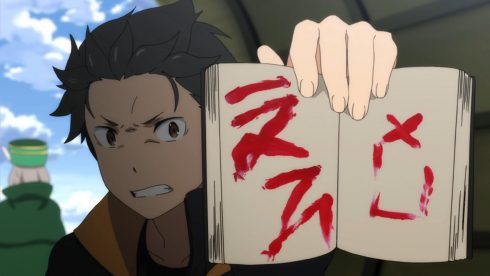 I’d consider everything past that the big third arc for the show. It had some good moments. Subaru tending to go too far and running into problems wasn’t a bad thing. A bit of strife with him and Emilia made for a powerful scene as well. I can’t say that everything that happened to him was in my tastes though. I do think the author went a bit too nuts in this arc. The amount of psychological trauma inflicted on Subaru got to the point where honestly it’s hard to believe he recovered.

And then of course came that episode. It’s all subjective and will put it out there from that point of view. While I had some issues with how far the show was going….episode 18 was a turning point. That wasn’t being sadistic towards Subaru (unlike a good part of the arc), but rather being pretty sadistic towards the viewers. Spending way too much time showing of Rem’s devotion, sacrifice, and everything that basically makes her the best character in the entire series. Going that far to develop Rem so extremely well just to slap the viewers in the face and say “nope, she’s not the main heroine. HA!”

That just made a lot of the remaining episodes (7 after that one) rather uncomfortable and less enjoyable. That’s not the adaptation, but the writing. The show wasn’t as engaging past that point. The quality itself didn’t drop, but the enjoyment did. Ironically episode 18 was both one of the best episodes and one of the worst of the series. 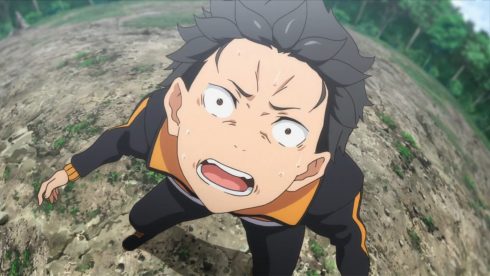 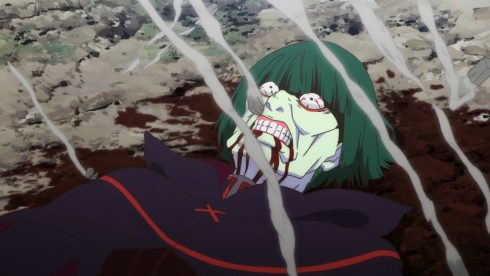 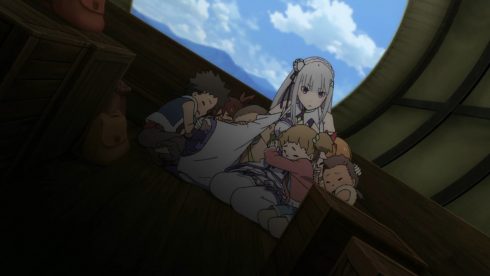 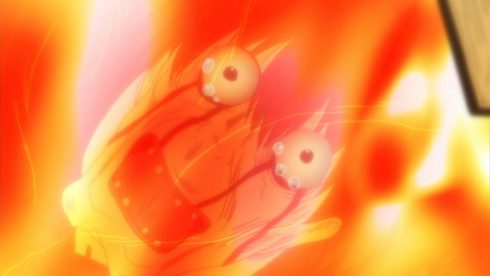 I think on an objective front the show holds up as one of the best of the year so far. Honestly you take out 2-3 episodes and it probably is my easy favorite for anime of the year. But, unfortunately those episodes did happen and it did lessen the greatness of the show for me. Not the case for everyone and maybe not even the case for the majority. But, all I can do is respond to something based on my opinion of it.

For me Re:Zero will go down as a show that was just a few steps short of greatness. An unbelievable adaptation that I think White Fox deserves a lot of praise for. They were dedicated and it showed. Willing to remove the OP/ED when needed in order to tell the story. I wish more anime could have this level of time, money, and effort given to it. This show may not end up as one of my favorites, but it still holds up as a really good show. The technical quality of the show was really well done and it did create some likable characters. Effort being given to round some characters out and make them shine with all their flaws.

I say goodbye to Re:Zero, it was an interesting experience.