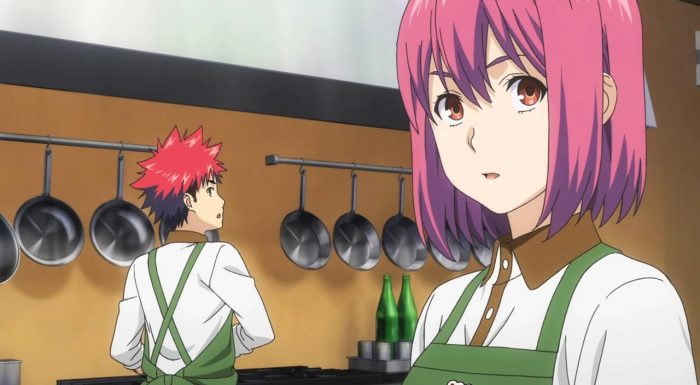 With only two episodes to go, this week’s episode, “The Stagiaire” was a nice little stand alone story. A pallet cleanser of sorts, after the big long competition based story arc we just went through. I say that, because beyond just being a really good cooking “battle” story, one of the most important things that I think Shougeki no Soma does best, is focus on the food and service industry as a whole, rather than just the culinary aspects of it. 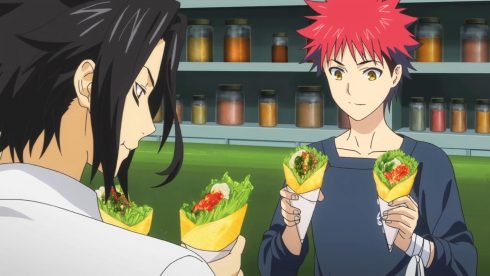 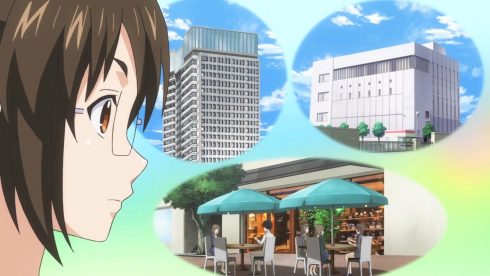 Half the battle of any practical industry is actually the business side of things. How do you market things? How do you sell them? How do you manage supply and demand? What KIND of business do you want to be and who do you want to cater to? These are questions and situations that restaurants and food related businesses face on a daily basis, and its great to see Shokugeki no Soma tackle this particular idea once again, from an entirely new vantage point.

And that vantage point, this week, was the “Stagiaire”, an internship of sorts where students from Totsuki ended up going and working at actual restaurants for an entire week. The goal? “Make a lasting mark” during your time at the business you’re assigned to. Which, given how cutthroat and practical Totsuki, seemed more inline with the reputation that we’ve seen established, than the more “collaborative learning environment” side, that we saw in the last arc. 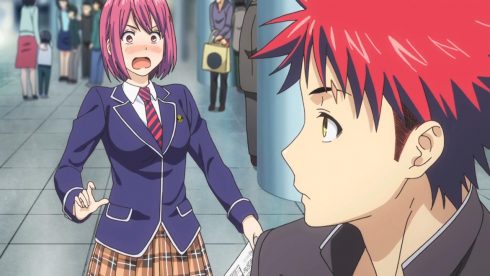 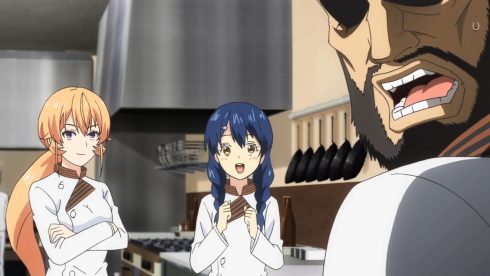 Of course, beyond just being thematically very endearing and relevant, what I liked about this week’s episode was how it paired some very disparate characters together. We got to see Alice pair up with none other than Megumi, and Soma found himself paired up with none other than Hisako. Unlikely pairings like these, are one of the benefits of having a huge cast of characters to play around with, and Shokugeki no Soma used that to great effect this week.

Hisako is a character that I’ve never been all that fond of. Her loss to Hayama was pretty deserved, and in general her whole adoration of Erina has always gotten on my nerves. What this week’s episode did, however, was really change my opinion of her as a character by tackling her fundamental issue head on. I honestly believe that Hisako’s companionship with Erina is fundamentally damaging to her as a person, and that both girls are honestly better off without one another, at least right now. 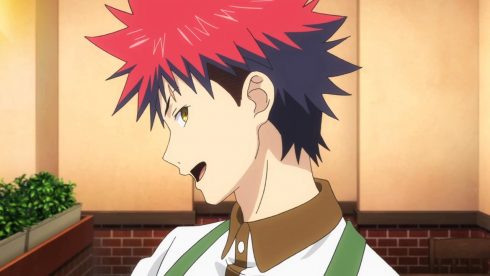 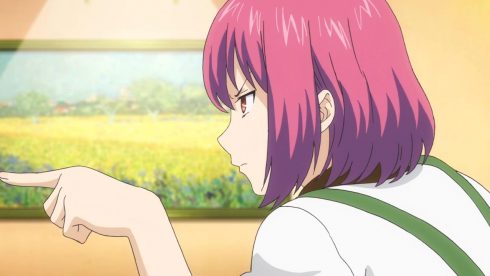 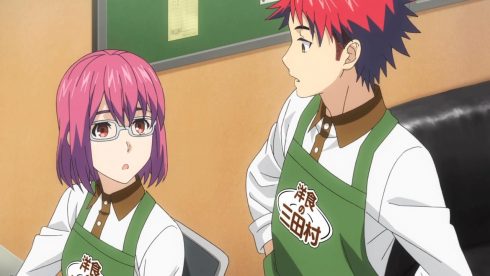 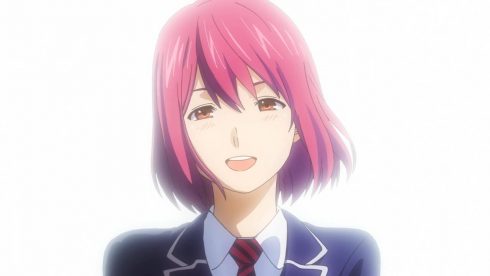 Nowhere is that clearer, than in the episode itself. The amount that Hisako is able to learn about herself and her craft in general, by just being around Soma? Its immense. Hisako’s whole uptight personality not only melted as she spent more and more time with our title protagonist, but she actually became a better person from the whole experience. The diligence, hardwork and caring for other people that previously felt like rather annoying traits in her character, came out to the forefront this week and actually made Hisako a lot more likable when they weren’t all directed towards her “Erina-sama”.

Soma, on the other hand, saw bits of himself in Hisako, and got another chance to reflect on himself and his path. The big realization at the end was definitely a nice one to mention, but to be honest, Soma didn’t do as much growing this week, as he did a shepherding. He helped Hisako heal from her painful loss and helped her understand her whole situation with Erina. And if that weren’t enough, Soma pulled double duty and also solved a fundamental issue for the western restaurant “Mitamura” that he was assigned to. 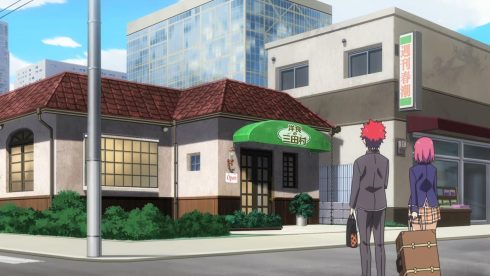 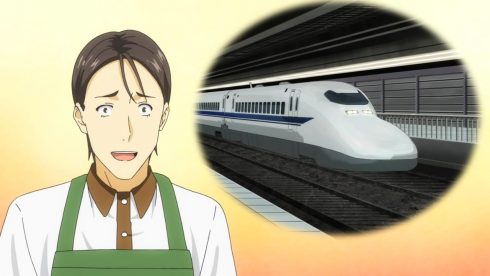 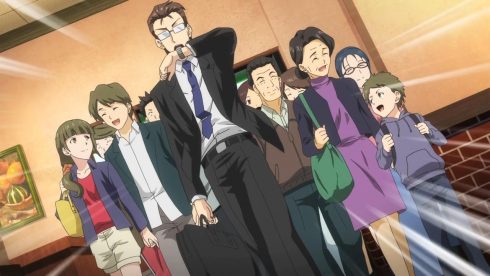 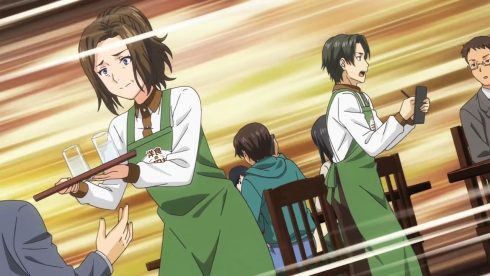 The problem? A simple case of  a change in environment around the restaurant, and one that was very Japanese in origin. Japan is one of the few countries that has an extensive public transportation system (trains),  that basically ferries people all around the country. The advent of a new train stop appearing close to where Mitamura was located, obviously caused an influx of rushed, impatient customers.

In other words, the restaurant found itself with an increased customer base, while not having the supplies, staff or infrastructure to meet this new demand. While Soma and Hisako definitely came in and remedied the situation with the extra help, the issue was more around what Mitamura would do once the two students left. 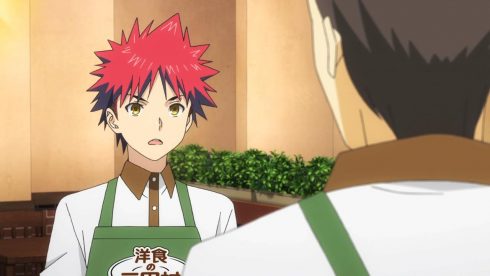 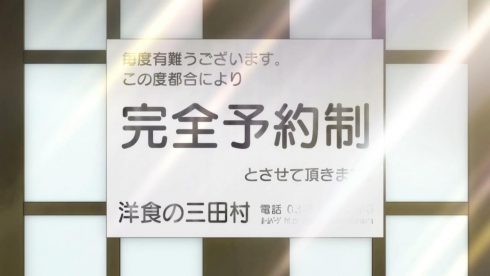 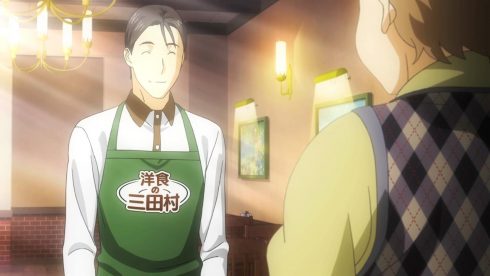 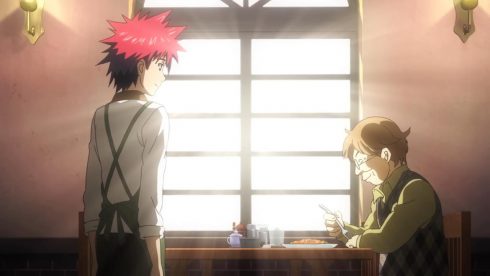 To that end, what I liked about Soma’s big solution, rather than Hisako’s, was that he focused in on what he found to be restaurant’s strength, rather than on the need to serve more customers. If you’re a niche restaurant, that serves the local population and isn’t aiming to become a chain that takes over the country, then you’ve got the option to be more picky and selective with who you serve.

And the way Soma basically eliminated the problem of “rush traffic” was to basically cut it out altogether by requiring reservations. Reservations are a concept that any restaurant goer is fairly familiar with, and its something that definitely works if the quality of food at a restaurant, is worth the hassle. Which, thankfully, in Mitamura’s case was very true, because not only did it have good food, but it also had an esteemed history and a great reputation. 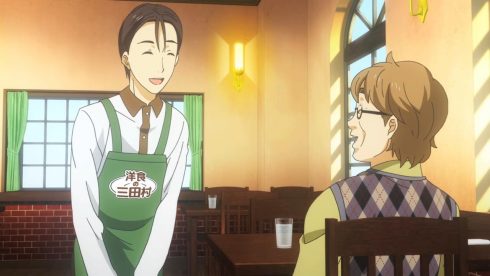 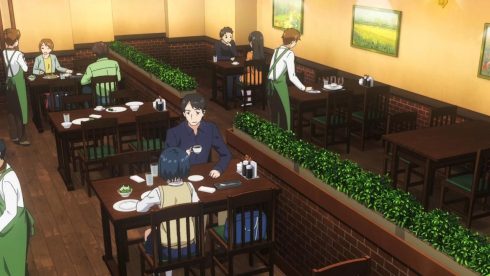 So, in essence, what Soma basically did, was give the owner of the restaurant, the chance to basically rebuild his business to be what he always wanted it to be. The owner and chef in question, Mitamura Mamoru, when we first see him, dreams of having a place that’s got a dedicated bunch of patrons that is serves faithfully.

That’s fairly important, because if you’re stuck trying to do something that you don’t want to, or don’t believe in, then there’s not really a chance for success anyhow. What the owner wanted, was a restraunt that catered to a dedicated collection of regular customers, rather than serving everyone and anyone. A place that people could be familiar with and come to regularly, is something is at the heart of the “mom and pop Shop” or “Family owned business” and its something that I think is dying out in today’s more modern world. 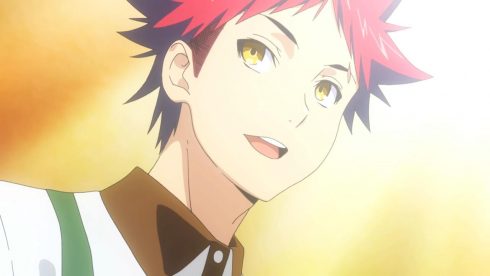 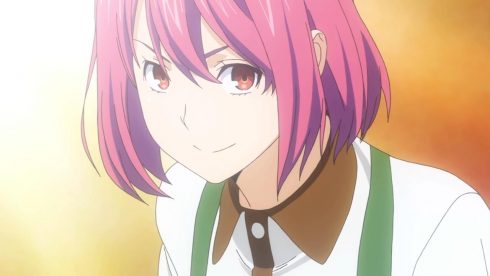 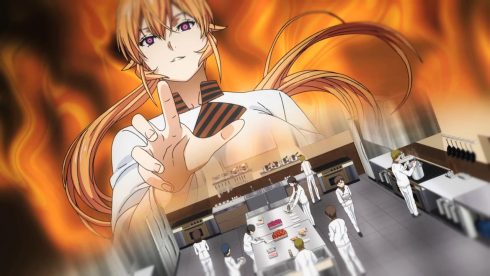 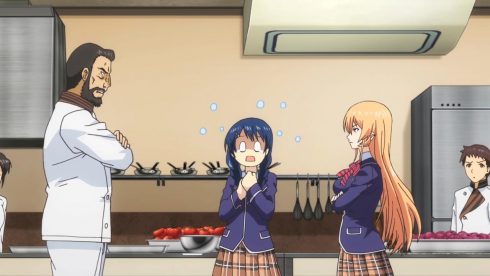 So yes, good on Shokugeki no Soma for giving a shout out to the Family owned restaurant, and for pointing out that a niche restaurant, can still be viable if the product it offers is good enough. The last part is fairly important, because Soma’s solution can’t work for every type of restaurant or business. Some places need a constant stream of customers, and can’t rely on their specific taste or the support of their local population. Which is fine, the important point here is that every business needs to identify what makes it unique, and handle its affairs in a way that brings out that uniqueness.

Now… While Soma and Hisako’s side of the story was littered with character depth and an exploration of what it means to be a restaurant, Erina and Megumi’s story was a lot more shallow of an experience. Which, is okay, because I don’t actually believe we needed to see anything other than a few hilarious moments of Erina bossing someone around, and Megumi trying to help in her own way. The comedy was in seeing someone like Erina, do a very un-japanese thing and pretty much challenge authority and seniority to the nth degree. Megumi being stuck with her, was kind of the spice that made the whole thing work, because of how non-confrontational she is. It’s also worth noting, that these two girls are being positioned as potential love interests for the main character, so seeing them together, and seeing such a stark contrast between them, was a nice little bonus on top of everything else. 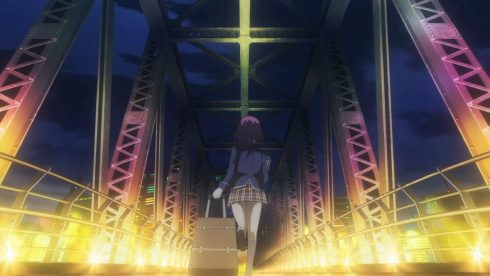 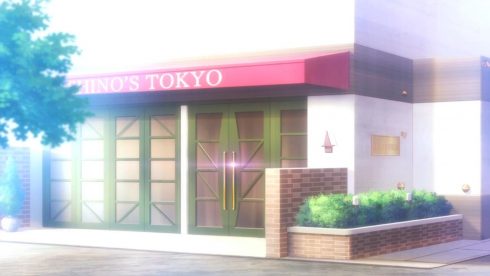 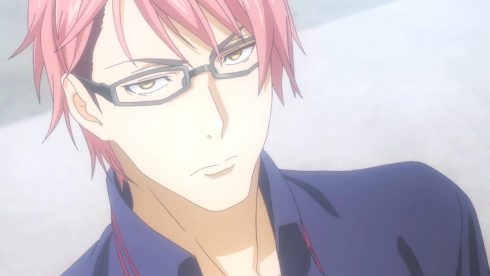 Which I guess, is a good way to look at this episode. It really does feel like a nice little extra piece of content and something that only exists because the show needed a breather. The worrying thing, however, is that there are now only 2 episodes left to go. And yes, the recurring question of how Shokugeki no Soma is going to end its second season is still right at the top of my mind, even if this week’s endearingly well done episode did serve to distract from that idea a bit.

With the little scene we see after the Ending Credits, I’m pretty sure that we’ll be seeing a certain character interacting with Soma again. Which… Man, is that exciting, and man, am I worried that we only have another 2 episodes of this series left. Such is the case with adaptations of ongoing manga though, I suppose.