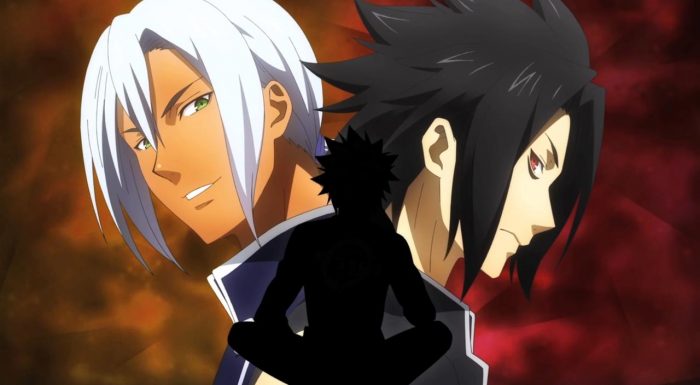 If there’s one thing that Shokugeki no Soma is a master at, its build up. We saw that with the Mimasaka Subaru battle, and now we see it again with this latest episode that’s prepping us for the big final. Regardless of what your opinions of last week’s cop-out resolution are, its definitely hard to argue with the fact that Shokugeki no Soma recovered its lost momentum this episode. Of course, while it remains to be seen if the excitement that this week’s episode generated will actually be worth something, I’d still say that this was one of Ni no Sara’s best episodes to date. 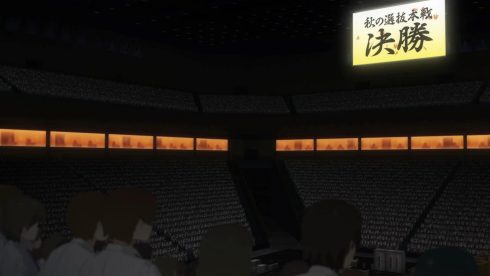 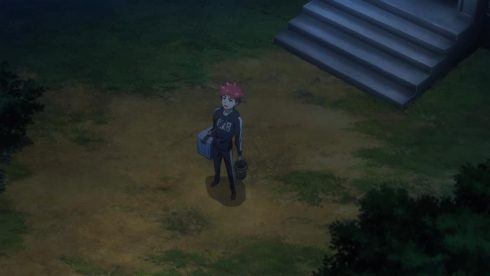 Its almost odd how I seem to be enjoying the transitional episodes a lot more than the actual competitive bouts this season. These two types of episodes are invariably linked, but it just seems like the actual journey of getting to the destination, seems to always be winning out on what happens when we get there. And as is the case with every build up segment we’ve seen thus far, the show expertly demonstrates how much the odds are stacked against its main character, Soma.

There’s always the issue of Soma being the main character, and by that very fact, winning by default. And more often than not, that is very much the case, but a lot of the joy of watching Soma win, comes from the notion of it never being as clear cut. It always feels like Soma is on the ropes, in dire straights and unlikely to actually come out on top. But we’ve seen this character surmount obstacle after obstacle, and so a big part of the excitement, at least for me, is how Soma is going to pull it off this time. 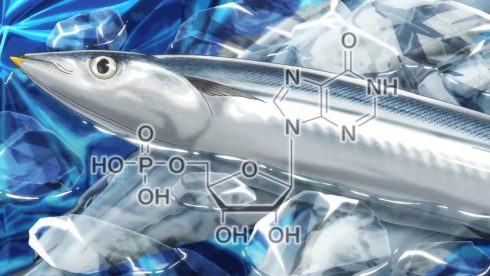 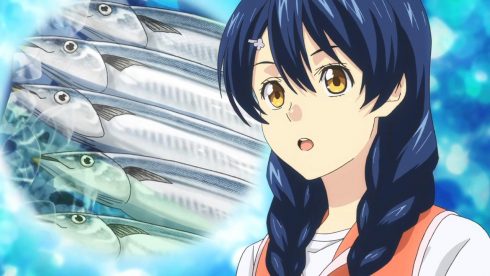 With the “Pacific Saury” fish that’s required to be the core ingredient of this final’s dish, it seems that both Hayama and Ryo have the clear advantage. Hayama has his overpowered to the point of being “balance-breaking” sense of smell, and Ryo has his countless years of experience with seafood and fish. And its clear from this week’s episode, that Soma has neither some silly hidden power, nor does he have the experience that the other two have. Its something that’s made clear in the episode’s opening moments.

Soma and Ryo’s little competition on judging freshness by making Sashimi, was a very important moment. It not only established Ryo’s clear dominance, but gave Soma some insight into the actual challenge he has in these finals. I’m almost surprised that Ryo was willing to show his hand and skill this early, as the best strategy would be to keep all cards close to the chest at this point. There’s this japanese purity however, to being open and to clearly spell out the situation. Ryo isn’t interested in just beating his opponents, he’s hoping to take them down at their prime, and without them having any excuses to fall back on. 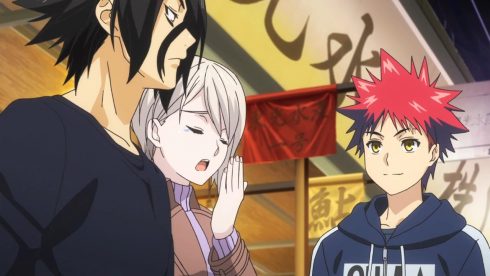 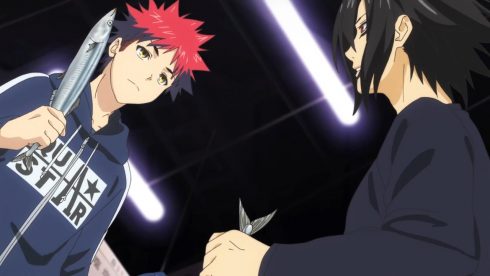 His display of prowess, when it comes to judging fish, is something of an instructional note for Soma. Its clearly spelling out that Soma can’t win based on just judging, so its best for him to see that. That’s a very gentleman-like, almost samurai esque way of setting up your opponent to be a worthy challenge. And its only after this competition with Ryo, that Soma’s goes down the path towards his specific approach in this final.

But before we get into that approach, lets talk about Ryo and Hayama for a second. Here’s my take on the situation of them both being in the final, after we’ve had a week to ruminate on the situation – I don’t believe Hayama is needed here. As a character, he’s just not as interesting, both against Soma, or in this situation, compared to Ryo. I almost feel like this episode and this story would’ve been stronger if Hayama wasn’t part of the picture at all. I mean, its clear from the start of this episode, that the true skilled cook to beat in this three-way is Ryo. 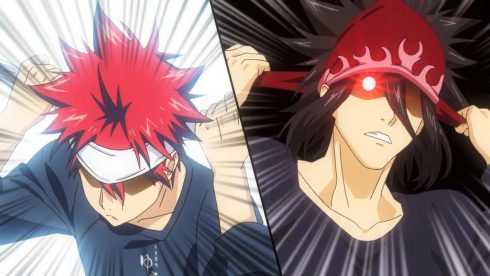 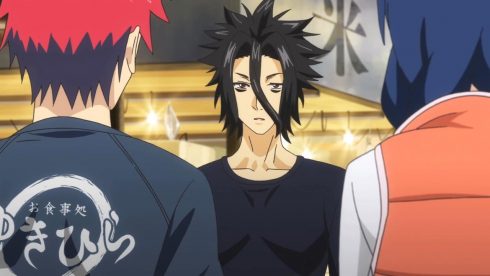 Ryo has the experience, he’s got the whole “dark version of Soma” going for him, and he’s the one with the seafood specialty. All Hayama has, on the other hand, is his nose, which quite frankly, is really starting to annoy me, as a plot device. A nose is very useful when it comes to spices, and I do believe that smell is an important part of a dish’s taste, but Hayama having a super nose is bordering on silly. A nose that he can use to not only craft a good spice combination, but actually detect the freshness of a fish?

That really feels like reaching too far, in my opinion. Unlike Ryo, who’s put in the effort and time, Hayama is basically just short-cutting his way to the same level, with a “super power”. And I’m all for super powers, if they make sense, or at least feel like they fit. Hayama just doesn’t fit into this battle, and so I’m actually rather curious to see what his role in this final is going to be. 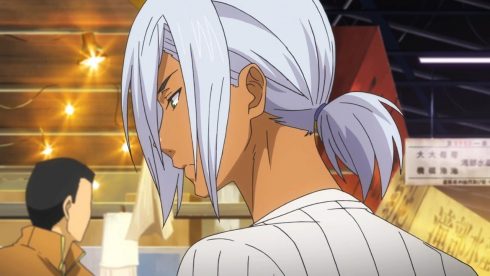 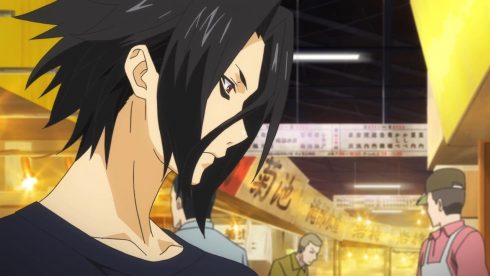 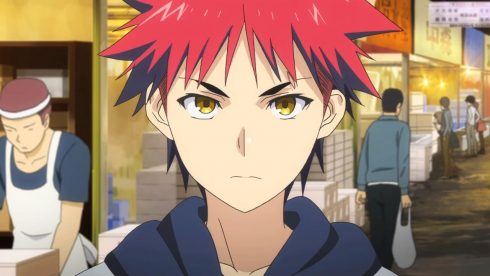 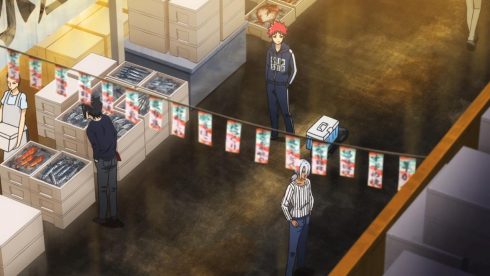 Now… A big part of this episode, beyond just showing Ryo and Hayama’s clear dominance over Soma in terms of ingredient gathering, was the actual depiction of Soma’s preparation for this final, and how it compared to his two opponents. While Ryo and Hayama were focused on shutting themselves off in their own little silos, Soma had to figure out how to deal with his “freshness” problem.

The approach that our main character took, to get it all done, was at least to me, the most enjoyable part of this episode. See while Ryo and Hayama feel like odd, eccentric geniuses, it was Soma that felt like an actual professional and a student, in the best way possible. Soma, decided to call upon all his friends, and learn from them. He decided to make the most of the joint, collaborative nature of academia, and his friends. 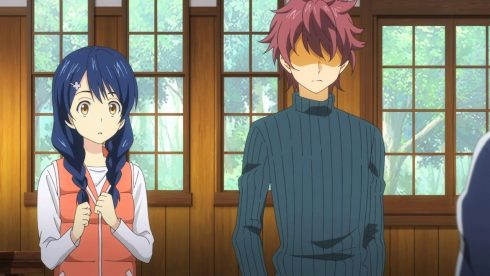 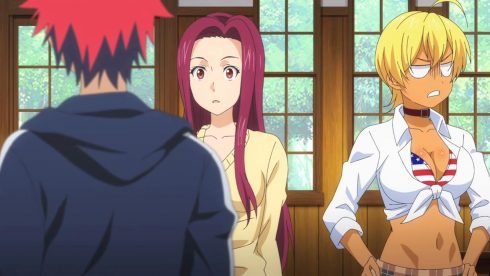 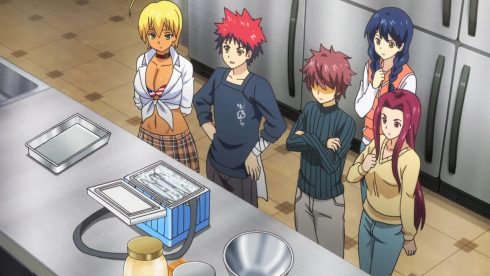 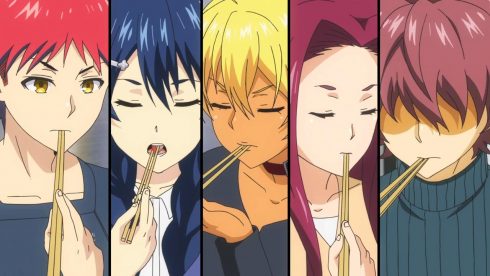 That kind of collaborative, fun, group based learning, is something that I still hold dear from my days in academia. Its the most important aspect, as far as I’m concerned, when it comes to any kind of schooling. There’s only so much you can learn from a teacher, or a text book. The things you can learn from the numerous people around you? THAT, is the true value of schooling.

So, seeing Soma actually call upon his friends and decide to learn from them, was what really made this episode feel “fun”. The idea of striving to achieve some goal, while working with one’s friends, that is the quintessential school experience. I loved how Soma’s tactic, was to basically try and “age” his fish, rather than try to go somehow compete with the other two on quality and freshness. 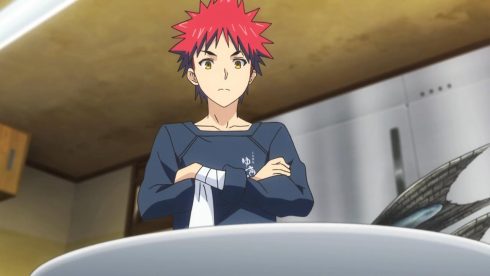 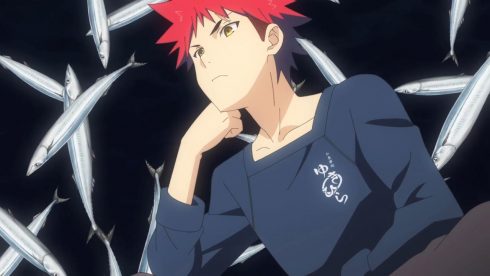 Soma’s always had to account for his weaknesses in some odd way, and I think this episode clearly indicated what we’re going to get from the finals. Its going to be raw talent and skill, versus creativity. Its something we’ve seen from Soma time and time again, and it’ll be worth seeing just what kind of weird, creative turn he takes in order to beat the other two.

Speaking of which, I should mention that this final, could be the point where Soma actually loses. There’s no story based imperative for Soma to win, and it could be a nice stopping point for him to crawl back from. Every shounen story has the big moment where its hero fails spectacularly, only to go back to basics and come back a lot stronger. Soma hasn’t really had that moment yet, and its clear that the show and the franchise have been saving that particular card for a while now. 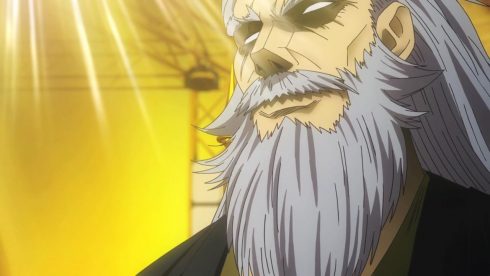 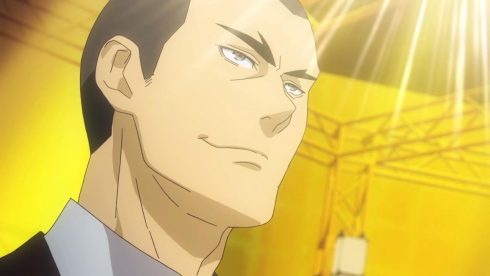 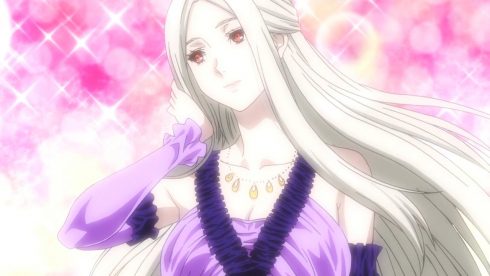 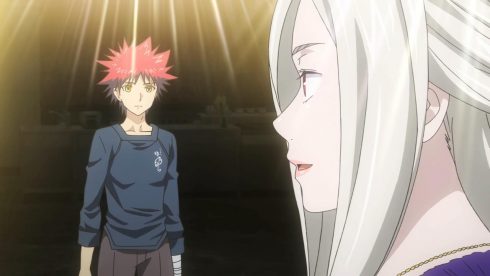 Is the final the point where we see Soma actually lose completely? Perhaps. If anything, there’s actually a 50-50 chance of that happening. One of the other two could clearly come out on top, but I hope to God, its not Hayama. Regardless, I suppose that will remain on the judges, who we got to see this week as the final itself kicked off, near the end of the episode.

The director himself Naikiri Senzaemon, the Resort head chef Dojima and for the first time ever, Alice’s mother,  Naikiri Leonora. Leonora is the headliner this week, as not only was it nice to see Alice’s mother, but to see her interact with Soma. Its quite clear that Leonora is clearly interested in the boy that defeated her daughter, and is expecting interesting things. There’s also some hinting at the fact that Alice might be interested in Soma. 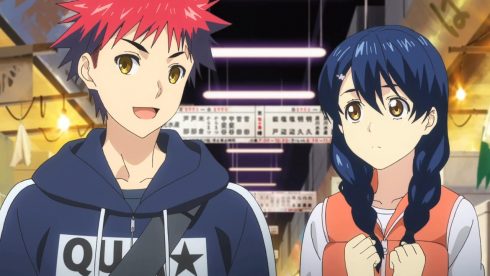 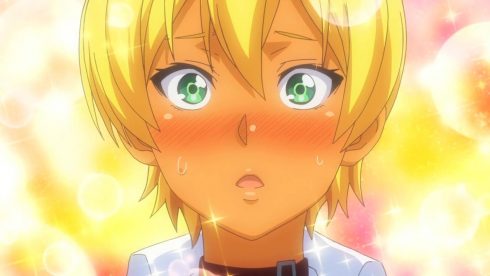 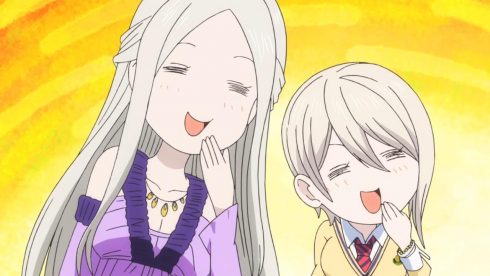 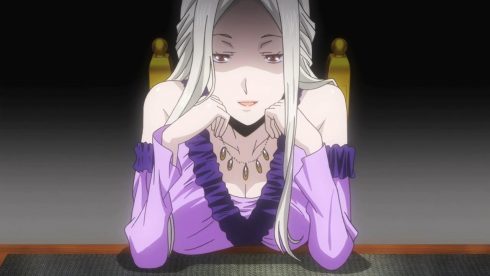 Which definitely makes things interesting. We got a nice moment of Megumi and Soma going to the fish market early in the episode, and a nice little moment of Soma and Nikumi with the whole “go with me” gag. Adding Alice to the mix isn’t a bad idea, although I suppose we are getting fairly close to harem territory here. Then again, the way these elite families work, they’re obviously looking for someone “big” to add to their ranks. While I personally can’t ever see a SomaxAlice pairing, I’m sure the hinting at that, is only there for those of us that love shipping.

Regardless of what Leonora’s intentions are regarding Soma and Alice, she clearly expects Soma to put up a grand performance after beating her daughter. And a grand performance it is, at the very end, when all three contestants reveal their selected fish. Hayama and Ryo are pretty much the same, with fish that look as fresh as finely sharpened “Swords”. Soma, on the other hand, has something that looks extremely different, rusted golden and more akin to some finely aged wood, rather than a shiny blade. 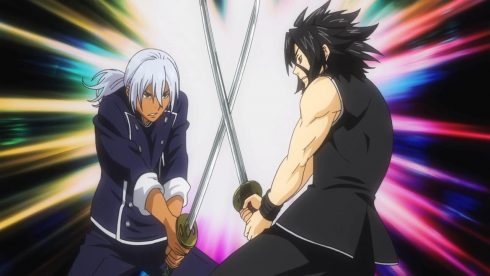 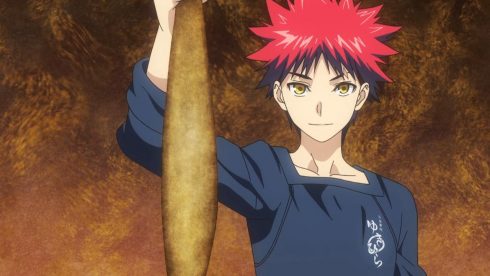 Again, it’s unknown whether all this build up and excitement is actually going to lead to something impressive. For what this episode had to do, however, it did it all really well. I’m super pumped for this final Shokugeki, and very curious to see what each contestant is going to do. And that’s something that I wasn’t expecting I’d be feeling, especially after what we got last week. Here’s hoping Soma actually breaks its pattern for this season, and provides a worthwhile finish this time.