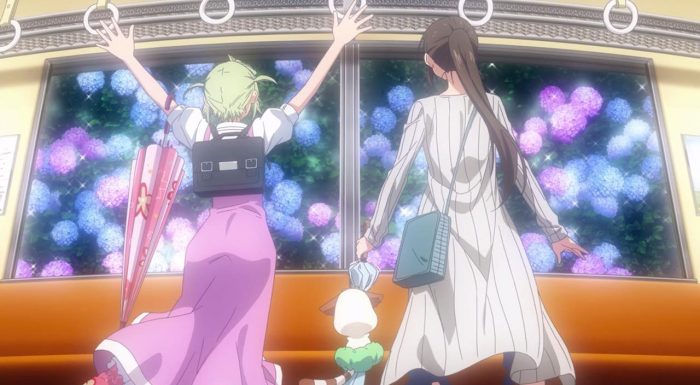 The mangaka for this adaptation’s source material definitely has some pretty clear common themes she likes to talk about and develop in her works, and Amanchu is no exception in this respect. This week featured not only one of the moments I have been anticipating seeing animated (it took place on the train in the first half of the episode) but it also kinda surprised me to see the adaptation choices once again. It was a pleasant surprise, mind you, and it fit quite nicely together, with the first half adapting chapter 13 of the manga and the second half chapter 19. 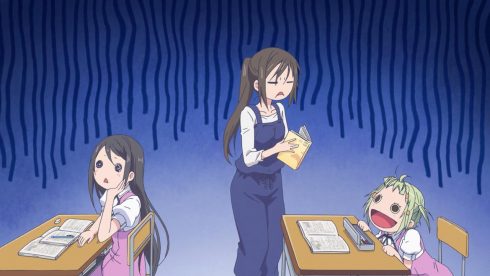 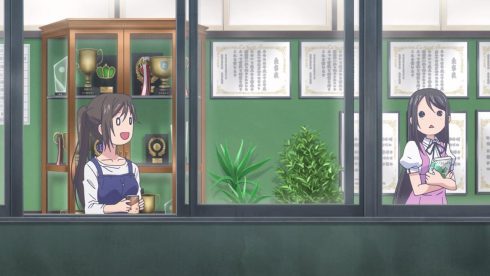 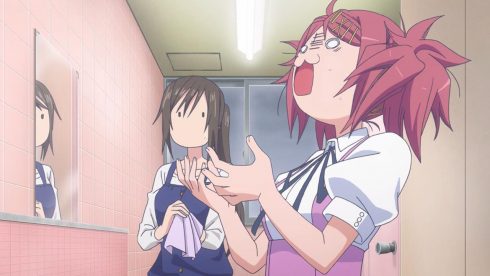 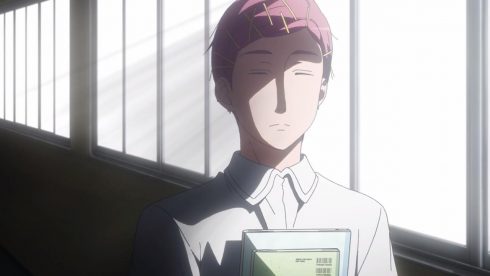 The first half of the episode (taken from chapter 13 of the manga) takes place during the infamous “rainy season” in Japan, that period at the end of Spring and right before Summer when it rains and rains and rains. It has widely become regarded that when the rainy season ENDS the beginning of summer is near at hand (usually accompanied by an absence of rain, but a high level of humidity and the heat associated with the summer season – both of which were illustrated throughout this episode). So then, the first half focuses on an encounter between Pikari and Katori-sensei after school while the rainy season is still “active”. 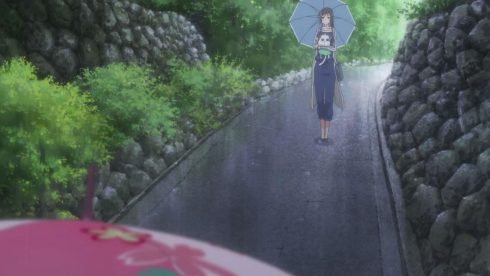 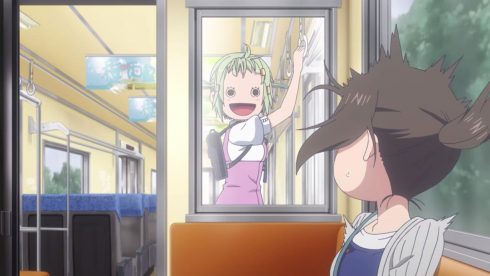 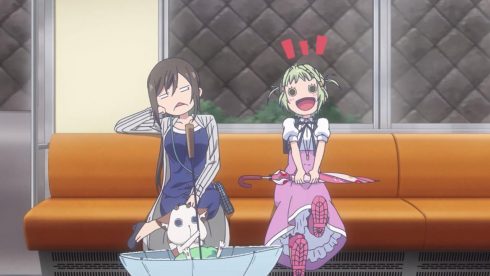 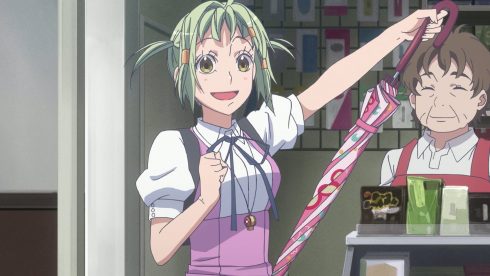 The overall narrative of the episode itself takes a surprising turn, and is presented primarily from the perspective of Katori-sensei herself mulling about life in general, yes, but also about her seeing the process of the students she teaches responding and reacting to “the little things” in life and moving towards adulthood. Focusing on the rainy season itself and the aimlessness (though not necessarily “purposelessness”), the feeling of “heaviness” (though not quite “depression” – though one of the elements of the English word “depression”, by the way, is literally the feeling of being pressed down), and similar things associated with being overcast or (again, literally) “under the weather”.

While these mullings dominate the first half, in the second half she turns to mulling aloud about the practical purpose that she feels education ought to produce in others (not just students in my opinion, but all people) and some of the shortcomings of the system she is a part of as a teacher. These ideas unexpectedly come out while watching the Diving Club members play the Japanese version of “Red Light / Green Light” (anyone else remember that one?) called “Daruma-san”, and it is through her participation that we see her ideas “in action”, as it were. By the end of the episode one feels these two elements have been sewn together very neatly with an agilely wielded needle and thread, with an answer being a general “type of approach to reality” or disposition towards life as a whole. 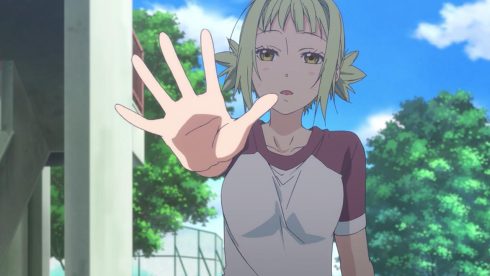 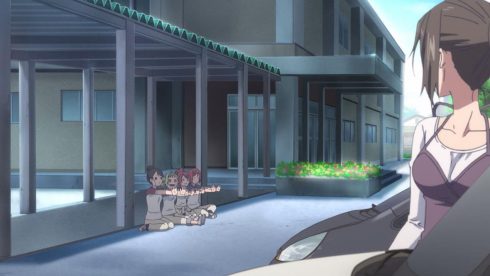 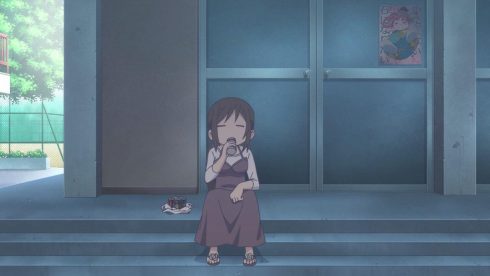 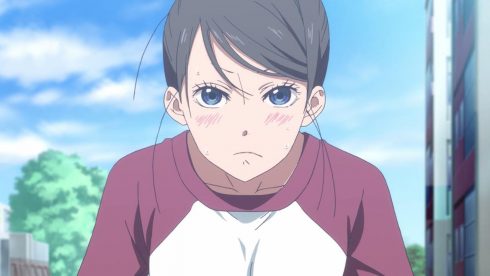 If Pikari’s articulated approach to Katori-sensei about the reasons and effort expended towards viewing the hydrangeas through the window of the train could be considered the first half of the overall collective “ideal” presented in this episode, the other half would be Katori-sensei’s musings on the purpose of knowledge in general, whether academic or practical, ancient or contemporary, “artistic” or “logical”. The core of both of these ideas have been expressed before by Kozue Amano in the Aria franchise.

The first half by the walking paragon of such an approach in the person of Akari in too many times to count, and the second half as articulated by Akari’s mentor Alicia in her describing how she goes about being a teacher to Akari (this took place in episode 6 of season 3 for those who are interested). And for someone who loves the Aria franchise to an absurd degree seeing these old ideas presented in different angles looking at the core beliefs was a treat. 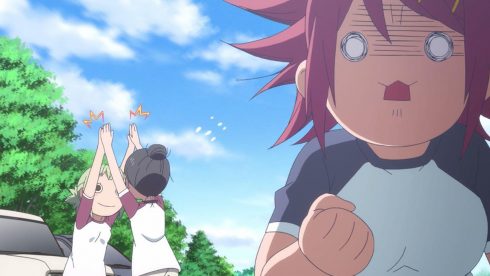 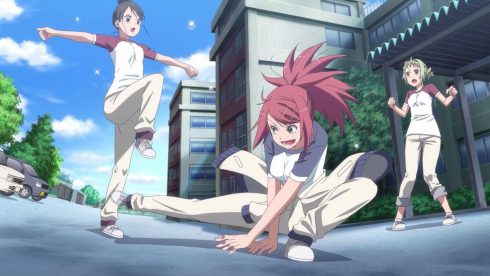 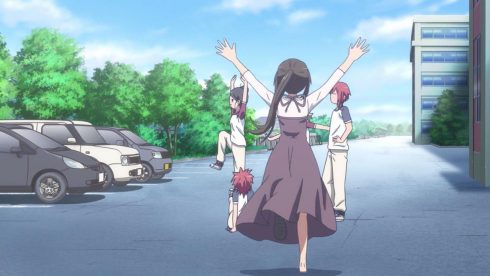 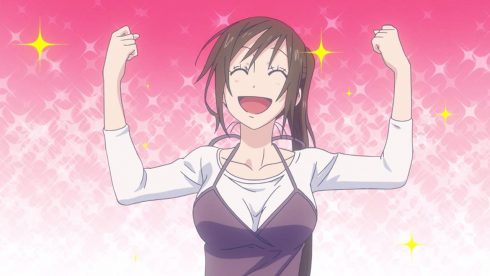 As often happens, though, while discussing this series with others it quickly became apparent that some of them had not watched the Aria series before, and were encountering these ideas for the first time here in Amanchu! An approach all too easily (even crudely at times) and hastily dismissed as being “mere escapism” when it is simply a matter of prioritizing what one enjoys, what one spends time on, what one thinks about, and even what sort of person one wishes to be.

It does not run away from the negative or the harsher realities daily life inevitably brings one’s ways in it’s ups and downs, but neither does it deliberately seek them out as a source of somehow “proving one’s maturity” or as a badge to “adulthood” or the like. One could even say that it allows one to have a higher percentage to possibly retain (or even regain or grow in or cultivate) the best characteristics of both being a child or an adult while avoiding the worst aspects of both. And in my opinion such a thing is something very worth striving for.