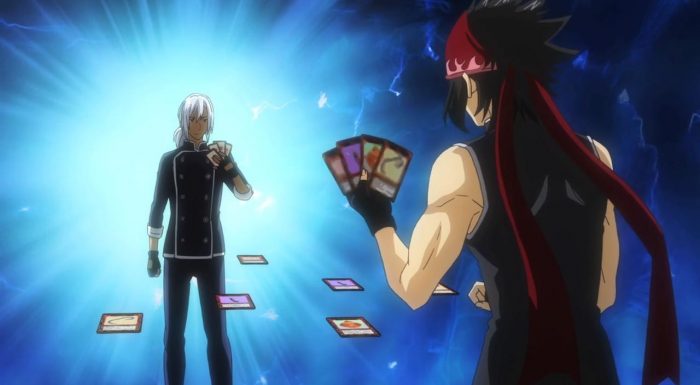 I can’t believe I’m saying this, but it actually feels like Shokugeki no Soma is losing some steam here, and regressing back to what it was at the start of the first series. Back then, There was this huge improvement in the quality of the characters, the narrative depth and just the general engagement that the show had. This improvement was built up slowly over the course of the first series, incrementally, and with a great deal of care and effort. And in remembering that rise to fame, I actually remember an exact turning point. A point, where Shokugeki no Soma ceased to be just a “good show” and made its big jump towards greatness. 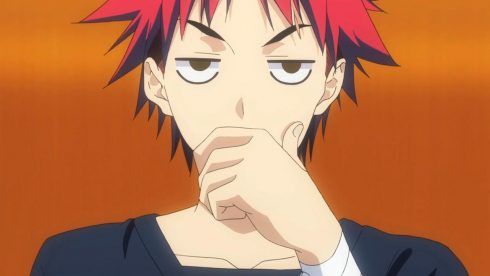 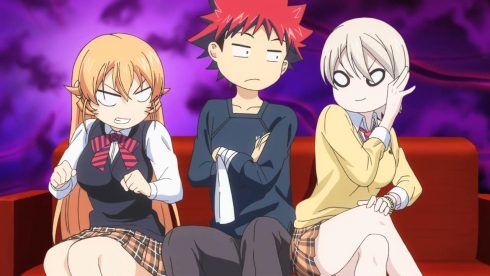 So… What’s so darn shocking about this second series, is that it feels like its going through a similar arc, except in reverse. This second series started off great, and felt like it hadn’t lost any steam since the break but… Then we had the whole Subaru situation, that signaled the big decline with its conclusion. There was this unsatisfying, dip in quality last week, and I felt like it only continued with this week’s Hayama vs Ryo, Shokugeki.

The big headline this week, was that the two of them actually ended their match in a draw. Not only was this pretty predictable (I actually called it, about 5-10 minutes into it all), but it broke a bunch of unwritten rules that Shokugeki no Soma itself has established. There’s always a winner and a loser, and there’s just a cut throat, almost unfair “winner takes all” mentality that this story has had until this point. To make a move like removing that very basic foundational element is problematic choice in itself, but to do it without any visible payoff or benefit, is really where it can lead to disappointment. As it definitely did here. 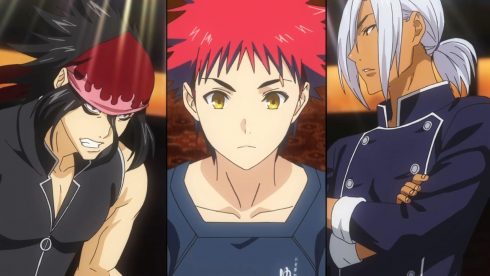 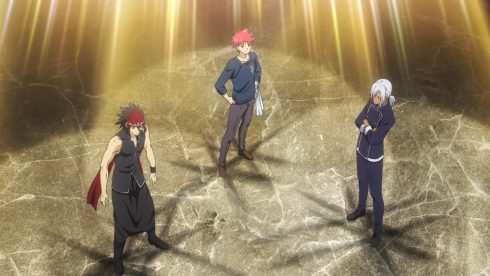 Here’s the thing, A three way between Soma, Hayama and Ryo doesn’t suddenly make the finals any more exciting. To me, in fact, the finals actually feel less noteworthy and exciting, because the conflict itself now feels a lot less personal. I would’ve actually loved to see Soma go against either Ryo or Hayama, because of how each individually relates to him, on a very fundamental level.

I’ve mentioned how I see Ryo as a kind of Anti-Soma, so there’s that. Then there’s the unsettled score that needs to be taken care of between Soma and Hayama as well. Both of those things are powerful, but I don’t think the story is stronger when they’re mixed together. Everything instead, will become a lot more muddled. And the only reason for the muddled nature of this, is a lack of confidence. Its almost like the story has lost confidence with itself and its characters here because there’s enough story and enough depth in both Ryo and Hayama by themselves, to where either of them could provide a fantastic finale for this Autumn elections arc. 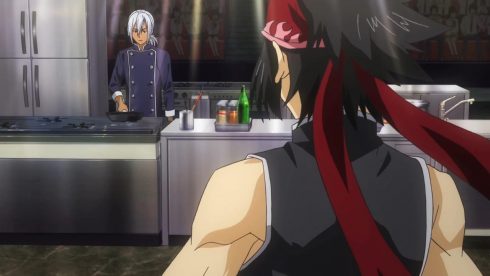 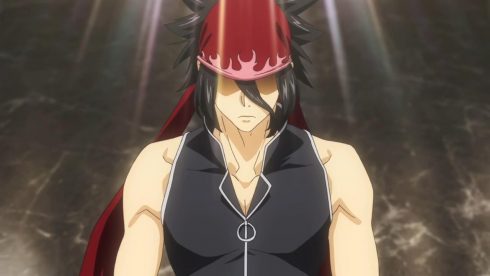 To me this draw represents a clear inability for the mangaka “Yuto Tsukuda” to actually choose between Hayama and Ryo. The obvious solution, when not being able to choose between two things, is to basically have both. That’s a very childish approach though, and its not how the world works, especially world of Shokugeki no Soma. So yeah, I didn’t like this rather predictable, cheap and frankly “easy” path that the story took here.

What I could’ve seen this episode doing, is serving as an actual build up to the big final instead. Ryo or Hayama, whoever turned out to be the stronger one, could’ve established his power and threat, by beating his opponent. Then, Soma would be taking on the winner of this rather interesting match up, and the stakes would have been a lot higher. 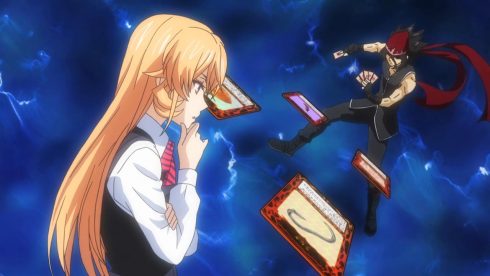 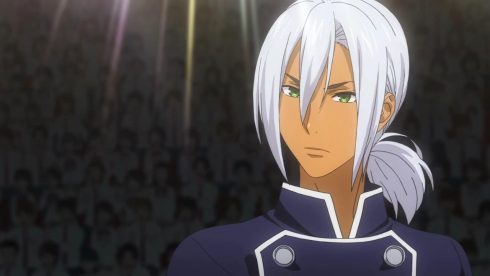 I feel like this change in direction was really something that the story itself has frowned upon. Remember Erina? Erina has been accusing Soma of something like this since the series started, i.e a cheap parlor trick designed to artificially generate excitement. Unlike Soma’s antics, however, this move didn’t serve to excite, and just embarrassed the series instead. And a big part of that embarrassment, came from the frankly very phoned in battle itself.

I found it quite ironic that Ryo was screaming at Hayama for a lack of investment in this battle, because THAT was a great analogue for the episode itself. There was a lack of feeling of investment, or importance, and it all fell even more flat, by the end of the bout. 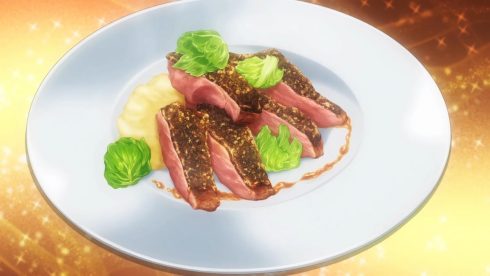 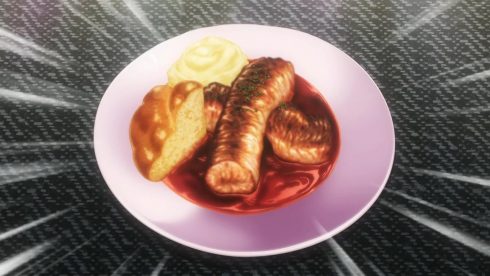 I wasn’t a fan of either dish this week either, and that was exceedingly surprising, because Shokugeki no Soma has rarely if ever gotten the food portion of its appeal wrong. But here the topic felt very general, i.e “western food” and the dishes themselves didn’t contrast one another in any meaningful way.

Hayama stuck to his guns and used his spices to create a duck based dish, while Ryo used his typical seafood specialty to create something rich and overwhelming. Neither felt all too impressive though, and there’s a pretty big case for either being not exactly “western” in their approach. Spices, for one thing, aren’t heavily used in western cooking, so that was a big strike against Hayama. As someone who enjoys and loves cooking that uses spices, I can’t believe that this show tried to pass off either dish as uniquely western, because both felt more oriental than anything else. 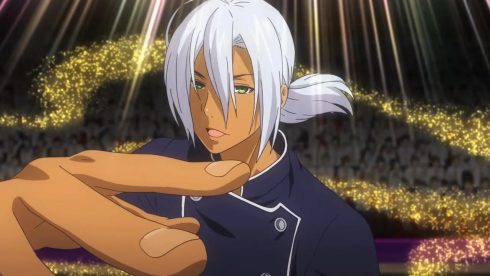 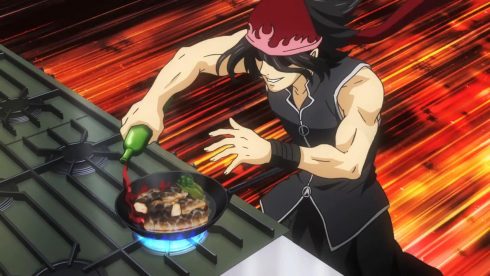 In a way, this theme itself didn’t leverage the particular qualities of the characters that had to cook within it. Now, that could’ve been a fairly novel concept, if it had been done correctly. A situation where both contestants had to move outside their comfort zone, would’ve established either as a much more formidable cook. Yet, neither contestant strayed too far from their specialty, and there was no meaningful idea behind this battle as a result. Everything from the battle itself, to the finish, felt a bit less stellar than what the franchise has become known for.

Was this just a case of the source material having a few off weeks? I certainly hope so, because I’m starting to get really worried. We’re past the half way point now, and at this point, the show should be gearing up to make things more interesting, rather than lose steam and provide a bunch of disappointments. While I still don’t think this series can ever be anything other than good (at least, for now), I do want it to continue to exceed my expectations and impress me, like it was able to do, on a near weekly basis before. 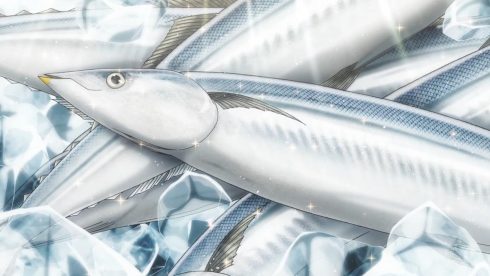 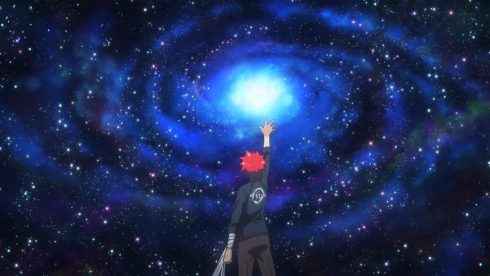 We’re past the semi-finals now, and its all gearing up towards the final. A part of me really wants the final to be quickly done with, so that we can move to whatever next big thing this story has planned. The final itself feels pretty meh, and I’d much rather see Soma take on Erina, or see something new entirely. And that I think, really highlights the true failure of this episode, because not only was it a disappointment, but it has me actually less than enthused for the immediate future. I know this show will be fun to watch, but I can’t imagine something earth shattering coming my way. For Shokugeki no Soma, that’s a clear step backwards.