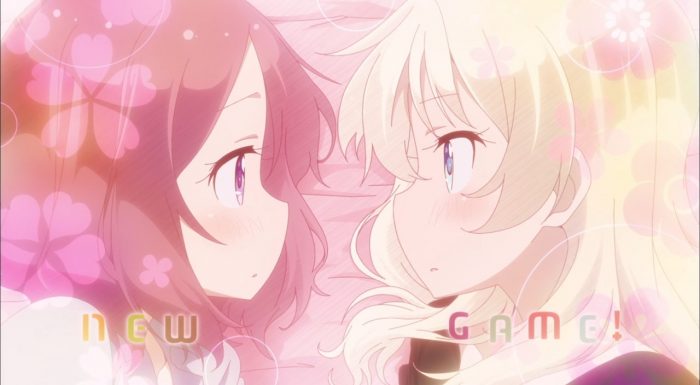 Welcome to another exciting episode of New Game!, the show about cute women making video games, and being caught in inappropriate situations in their underwear. I would say that Aoba is developing a bit of a complex about finding Ko sleeping in her panties, given that she’s objected to it in some way in every episode thus far, except that she has caught Ko doing it in every episode thus far as well. 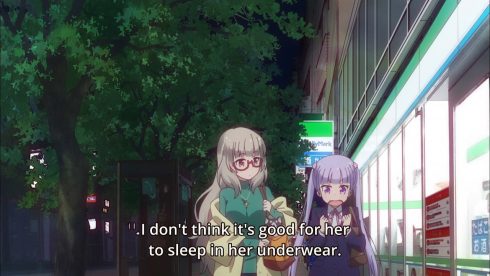 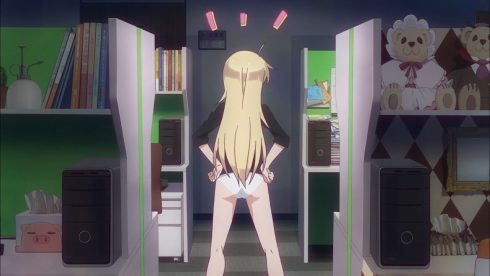 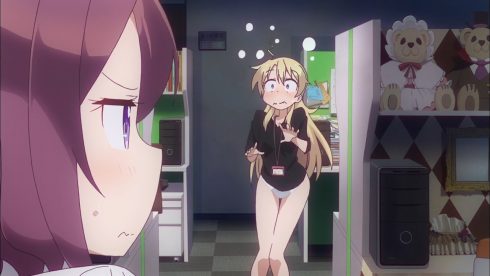 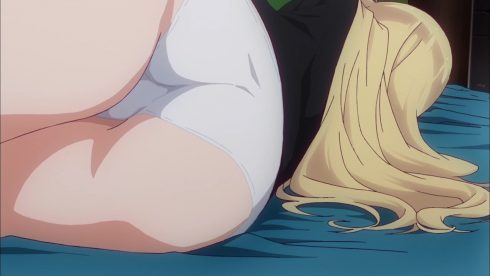 While folks are almost certain to have noticed the major theme of this episode, I’m going to put it aside for the moment to address later, and concentrate on some other things that seemed worth noting to me. What came to my attention first was Ko and Rin’s scene together at the office at night.

One thing this scene really makes clear is that these two are very close to each other. They’ve worked together at least since the first Fairies Story game, they’ve been through both difficult and fun times together, and they trust each other. When they speak to each other with no one else around, they can speak differently than they do during office hours. They can let out the uncertainties and the weaknesses that they can’t reveal in front of their subordinates. How do they think the game is doing? Is their newest hire, Aoba, handling things as well as they expect her to, and is she happy doing it? Should Ko actually have been art director for the game instead of Rin? There are layers and layers of meaning and emotion and personal history beneath everything they say, and the strength of the relationship we see here is very powerful and moving. 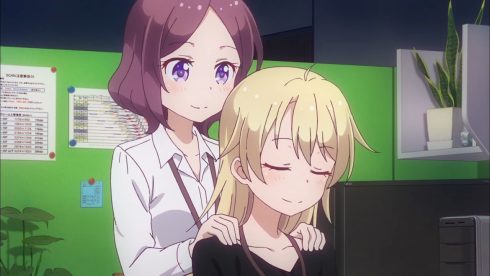 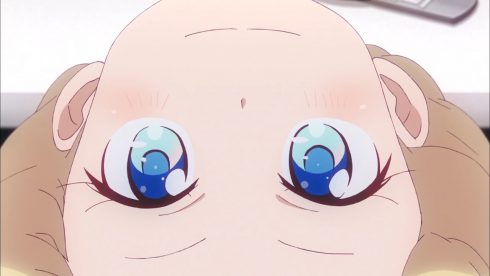 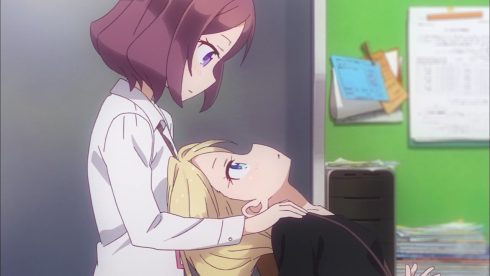 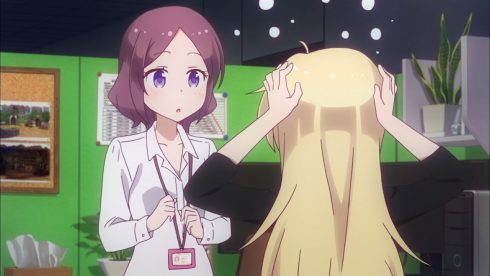 Their discussion of Aoba is also worth noting. Ko continues to have high expectations of Aoba, and wants to try to push her forward. This isn’t a deliberate harshness, but a belief on Ko’s part that Aoba is capable of handling real challenges. And I would say she also sees some of herself in Aboa too. The two of them are following the same career path, and I think Ko wants to ensure that Aoba gets the most out of it that she can, without suffering some of the pitfalls that Ko personally experienced. And so the discussion of having Aoba personally design a character for the game once she finishes modeling the villagers is brought up. Just an idea at the moment, but it’s a definite sign of trust in her. 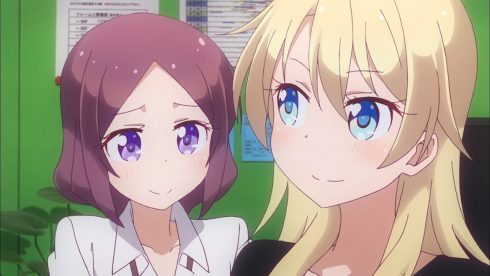 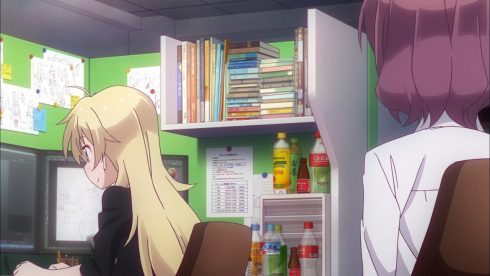 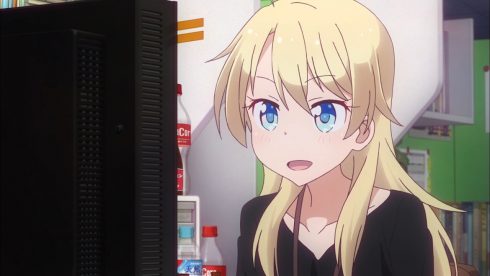 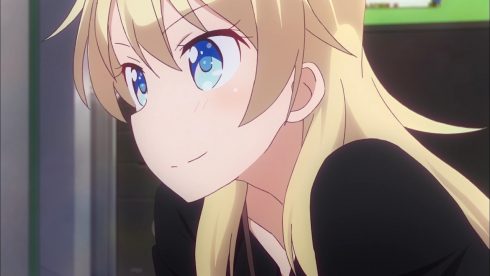 Moving on, during the paycheck discussion a bit of time is spent to highlight each character’s… well… character. That said, for the most part we don’t really learn anything we didn’t already know. Hajime is an energetic and somewhat childlike otaku who loves her toys and spends all her money on them. Yun loves fancy clothes, so that’s where her money goes. The only real surprise here is that Hifumi buys cosplay outfits, and isn’t willing to share pictures thereof with her officemates. That’s something I’d like to see. 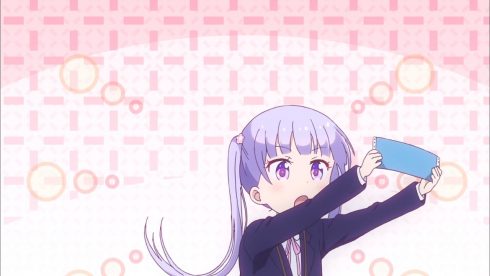 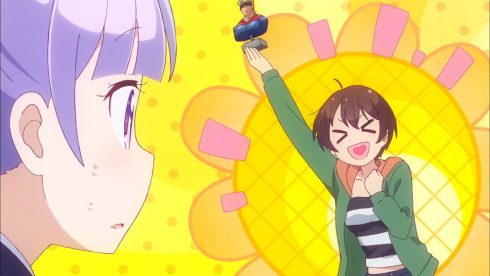 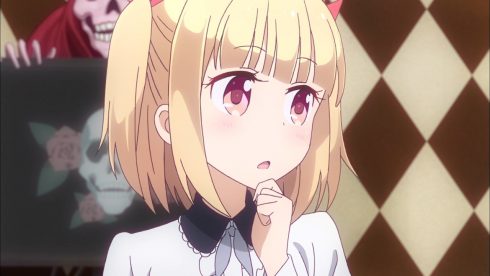 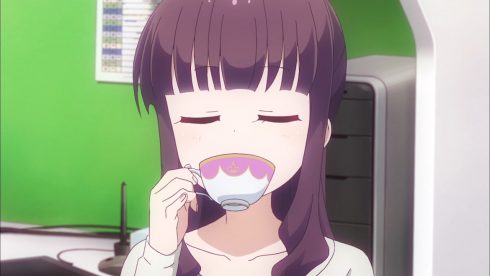 So, with all that said, I feel I should probably address what feels like the major theme of this episode. One doesn’t exactly need to have either the yuri goggles or the shipping goggles on all that tight to notice that there was some fairly noticeable ship-teasing going on between Rin and Ko throughout most of this episode. Being caught together in their underwear was a cute misunderstanding, of course, but far more important is Rin’s reaction when she learns Ko has forgotten about the trip they took together to a hot spring. Her blushing, flustered, angry pouting is far more reminiscent of a girlfriend upset at her significant other for forgetting an anniversary or some similar important date than it is any kind of mere friendship. 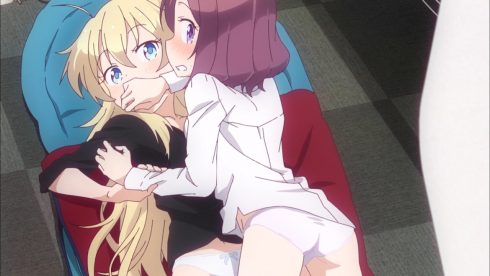 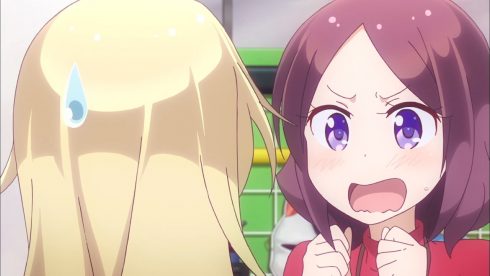 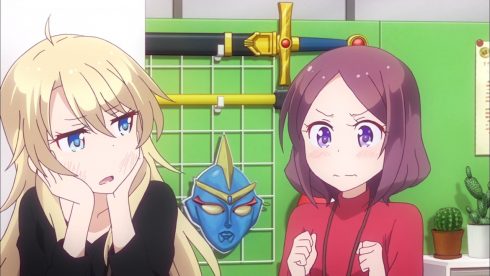 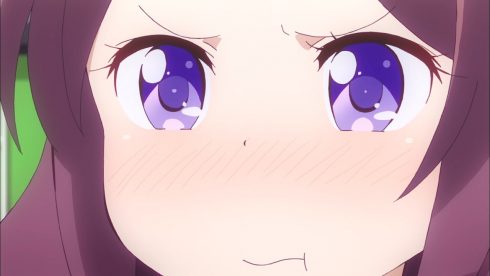 I call this ship-teasing for a reason: as far as I can tell, the author has no intention of fulfilling the ship, he just likes the idea of playing with it. So, while Rin shows signs of interest in Ko, Ko shows no sign of thinking of Rin as anything other than her closest friend. Which leads to various amusing antics throughout the episode. While Rin is panicked at being caught by Aoba, Ko is merely amused. When Rin is upset at Ko for forgetting about their hot spring trip, Ko is confused as to why it was so important. Certainly Ko cares about Rin, but the way she cares about her seems to be different than the way Rin cares about Ko. 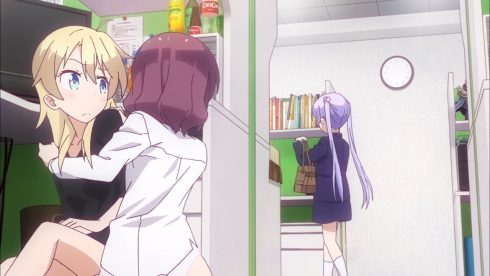 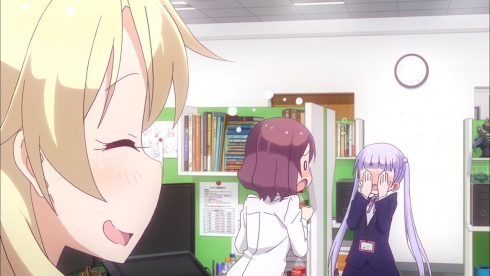 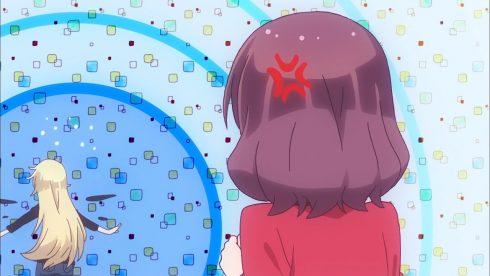 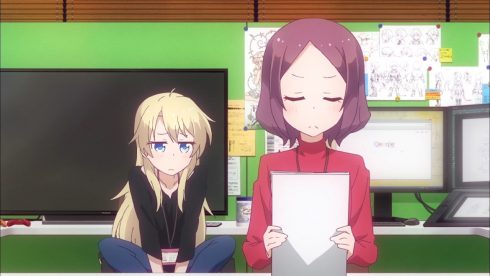 Not that it matters a great deal. Romance, of any type, isn’t a focus of this series, and at the end of the day it isn’t going to go anywhere. What matters is that we have cute women making cute video games cutely. We will watch their day-to-day antics, and have fun with them. 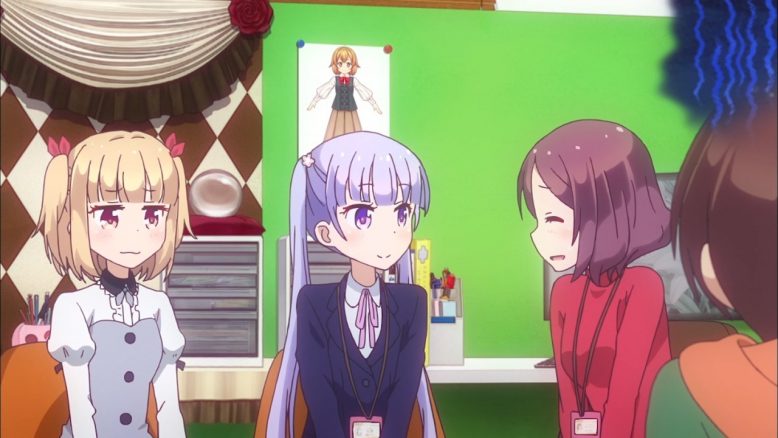 OMG, Aoba has a printout of her first villager pinned up beside her desk. That’s so cute. 🙂