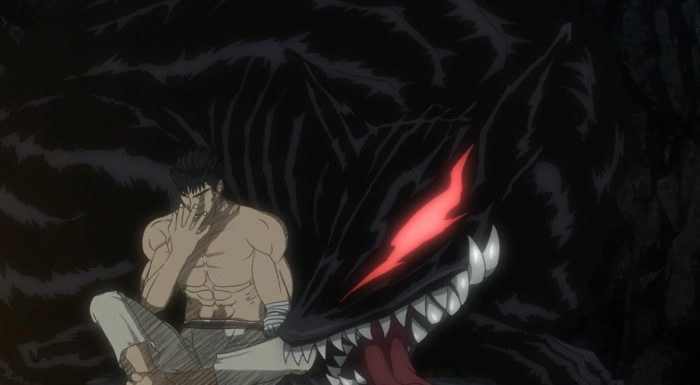 Its always great to see a less than stellar adaptation course correct itself a bit and start to follow its source material properly. This week’s Berserk offering was a perfect example of how minimal editing to the source material can actually save an ailing series like this one. After last week’s mostly anime original episode, it was a nice change of pace to see the anime not only do a breather episode, but adapt the manga almost panel for panel. There were definitely some edits and changing of camera angles for sure, but, for the first time since it started, Berserk actually felt like it was adapting its source material rather than doing a bad interpretation of it. 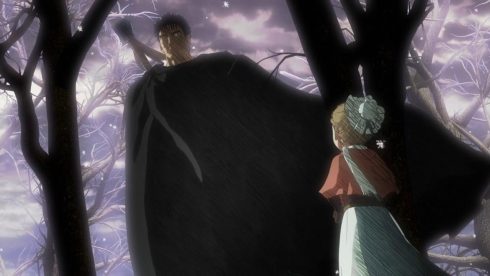 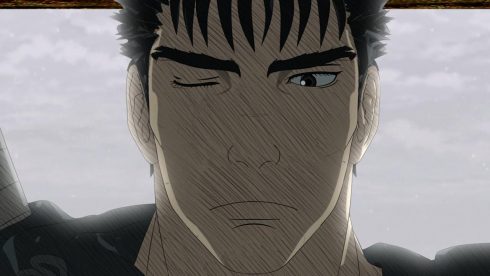 Its safe to say that the bulk of this series is going to focus on the arc known as, The Tower of Conviction. And from the outset, this series has been in a rush to get to this particular point in the story. And the difference between this episode, and the last three, is perhaps, the biggest evidence to support this whole idea. Even before we got into the story arc proper, this episode actually took the time to recount the last two years. Why  had Guts been more or less alone for  the past two years? How had he ended leaving Casca behind and slaying apostles left and right. These were questions that needed answering, and thankfully, the series delivered this week. The quiet, contemplative and introspective episode that Berserk showed off this week, is another reason and another aspect of the source material, that’s truly remarkable. Berserk is a rough, crass, overly-sexualized and utterly graphic story, but its also got some clever writing and character development beyond the surface.

Guts’s whole descent into madness and his lust for revenge? Those things have consequences. The irresponsibility of leaving Casca behind and focusing on his own anger, is something that the show and story don’t shy away from. Guts isn’t a perfect guy, hell, he’s a pretty messed up bundle of pain, anger and revenge. And while those aren’t likable traits, Its hard to blame the guy, especially given what he’s been through thus far. And I think everyone around him realizes that Guts’ whole rampage and killing fest has just been one big act of trying to cope, a way to run away from his own grief, pain and failure. 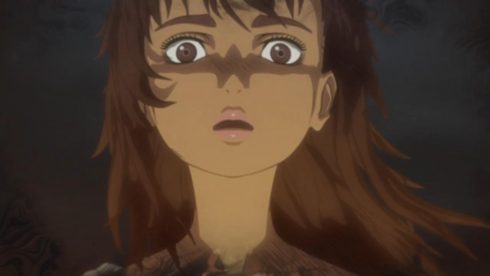 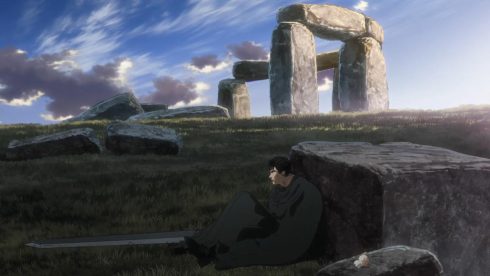 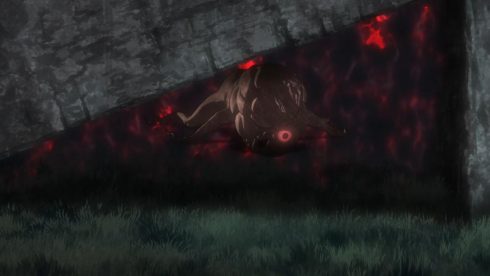 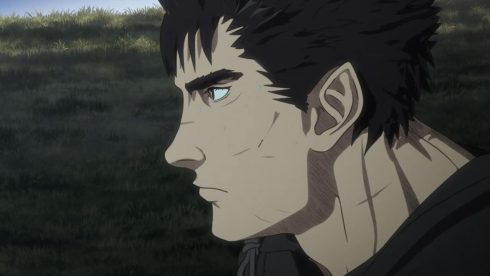 It shows that despite the power, mental strength and hardened exterior that Guts has, he’s still pretty much just another guy who’s had a traumatic experience, and hasn’t had the capacity to deal with it. I mean, It actually takes Guts two years to work through his anger, and just unleash it on the world, before he’s even ready to sit down and face himself and his issues.

Its definitely Casca, however, that kicks off his sort of healing process. The vision that Guts gets, and the warning, are extremely important, and are not just a very convenient plot device (you’ll have to take my word on that one, for now). And like I said earlier, its just good to see the anime not mess with the manga, and just adapt everything verbatim here. 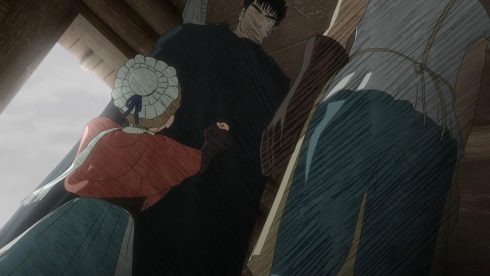 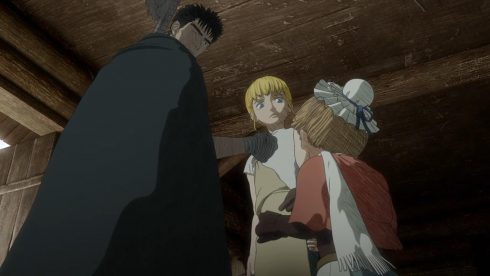 Its almost uncanny, how certain scenes are literally the panels straight out of the manga, having been brought to life with color, animation and sound. They’re not pretty scenes, and the animation itself is still pretty darn bad, but at least the spirit of the source material, even in this rather unpolished state, shines through.

The big moment of the episode is Guts not only coming back home, but regaining some of his sanity. There are two interesting characters tied to that particular concept, that we see this week, and they contrast quite heavily to Guts himself. The theme, of this episode and this week’s events, is largely around the idea of moving on. When we encounter Rickert and Gotto in the episode, we see how these two different characters, of different ages and situations, have gotten over their specific trauma, and how they learned to continue to live their lives. 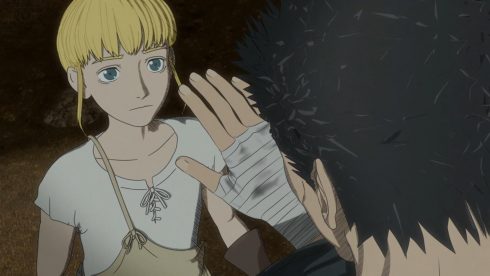 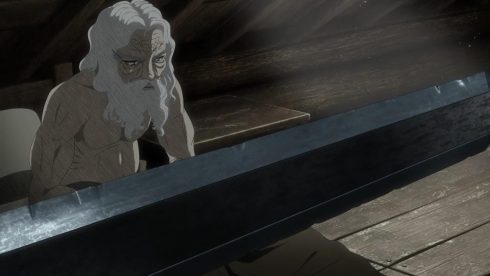 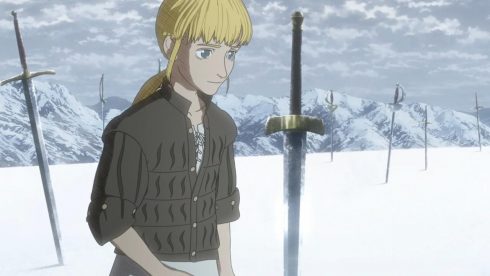 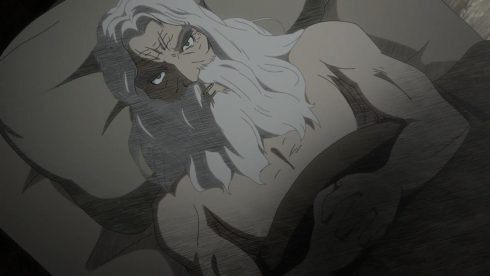 For Rickert, it was all about accepting the loss of his family and friends, and building a graveyard to honor their memory. For Gotto, his life definitely changed when he took in the girl that he seems to be taking care of, Erica. And While Rickert is young and a friend to Gutts, Gotto is s a man that’s both on his death bed. With the experience of an entire life time behind him, Gotto also acts as a sort of father figure and teacher to Guts, one that probably Guts needed a lot earlier in his life.

The words of wisdom that Gotto imparts of Guts, are key to Guts actually sitting down and understanding what he’s been doing with himself. And its in the final few moments of the first half of the episode, that we see Guts finally come to terms with himself, and actually decide to move on. 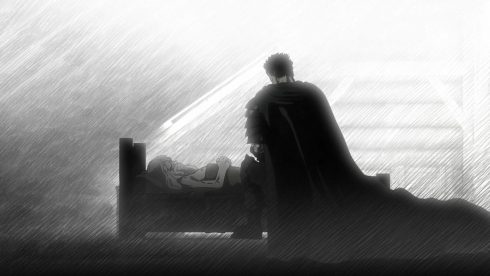 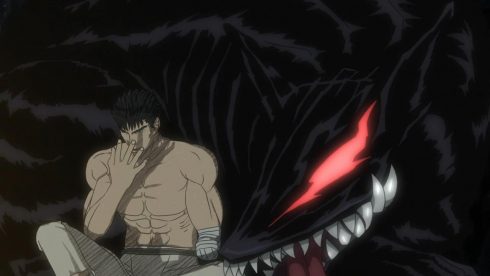 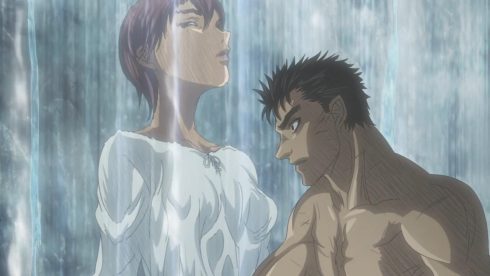 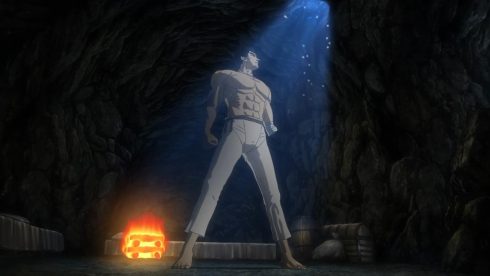 The whole introspective moment, with the back forth as Guts juggles his anger, his pain, and his responsibilities, all in attempt to make sense of it all…  That scene is pretty darn beautiful. It was exceedingly powerful in the manga, but I’d say the extra omph! from the voice work here, really makes a difference. Its unfortunate that the visuals on screen have some rather generic slide-like Transitions going on, but thankfully even the fairly amateur animation work here, isn’t able to kill any of the impact (though there definitely isn’t a lack of trying involved).

So Guts moves on, and with his visions giving him a clue as to where Casca is, he’s on his way to his next major challenge. But Guts’ big sorting out of his priorities and feelings, is only part one of this episode, with the second half focusing on the actual place where Casca is currently at. Its here that we rejoin Farnese and the Chain Knights, who are actually escorting a “High Inquisitor” of the Holy See. 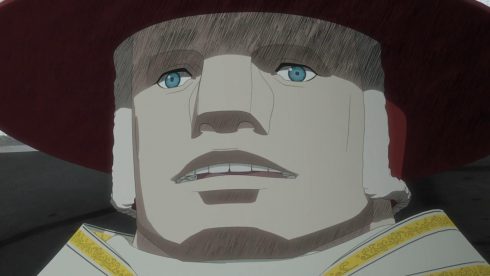 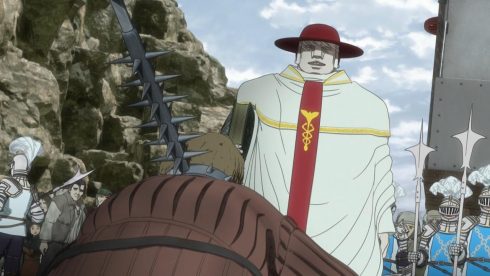 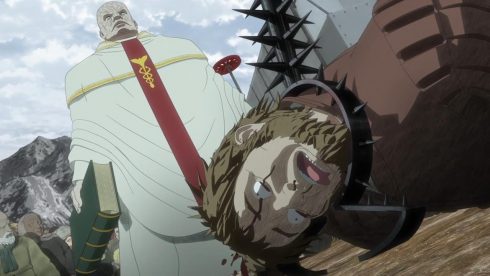 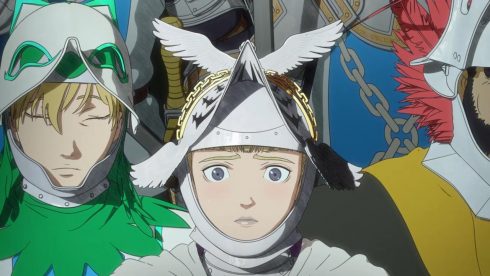 Again, its interesting to see Berserk’s clearly anti-religious sentiments play out in brutal fashion here. The torture and “breaking wheel” stuff is gruesome, and hard to watch. Its hard to watch, but it also “excites” Farnese, who seems to clearly enjoy inflicting pain. Speaking of Farnese, she’s also someone that’s interesting to compare to Guts. While Guts has since moved on from his angry rage and his refusal to accept his own problems, Farnese is still clearly in denial, and continues to fool and lie to herself while being fairly transparent to those around her.

I had almost forgotten about Farnese’s “getting excited” thing, but it was indeed something that happened in the manga as well. It was less overt perhaps, mostly because there wasn’t an accompanying sound effect to really bring the idea home, but it definitely shows just how messed up Farnese really is at this point. Farnese is going on her own little journey of self discovery, but its seems like her path is going to be a more egregious and longer than Guts’. 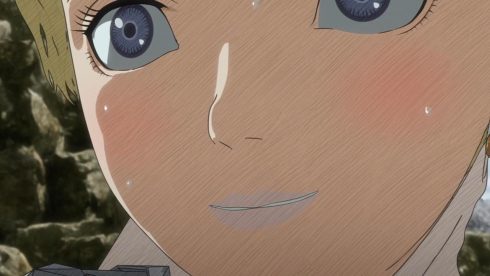 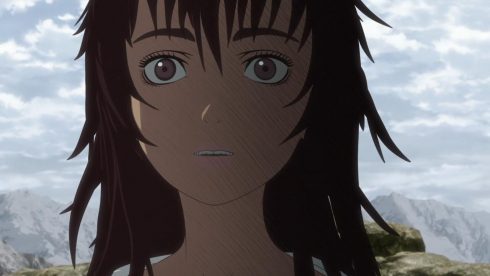 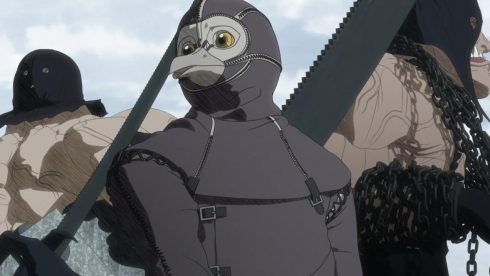 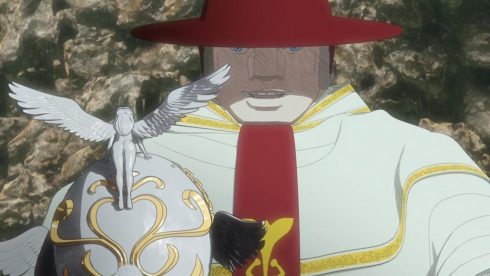 But Beyond all of that, we have an episode that introduces to us to another bunch of twisted characters in the High Inquisitor and his “torturers”. We also see Casca, and its clear that her mental state is pretty bad at this point. She’s regressed to a very young child, and she’s caught dead in the middle of a witch hunt location. Its all pretty intense, and I’d say that this episode did a fairly good job of setting everything up.

I’m hesitant to say this, but I do think that Berserk will be a lot smoother of a ride from this point on. There’s no helping the animation, but at least the storytelling should be fairly competent from here on out. Here’s hoping the rest of the series continues to follow the source material, and be about as good as this week’s episode.