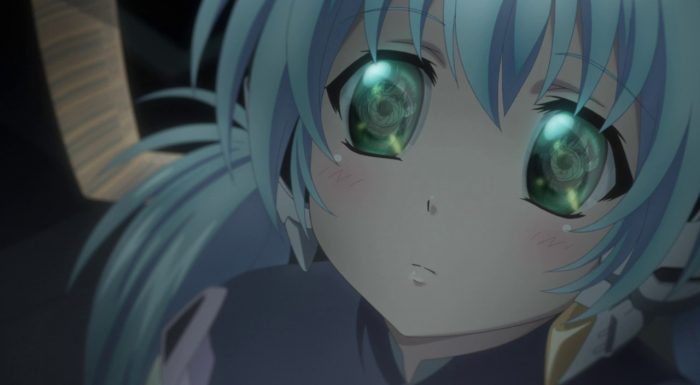 That was a very nice episode to be sure, but was executed with a lighter and more “subdued” touch than I expected it to be. Even so, no complaints! The adaptation continues to be excellent and enjoyable in almost every second on screen, drawing in the viewer and holding them fast to the narrative being presented – something plenty of anime can not make the claim to these days! As an added bonus, the episode was almost the length of a full anime episode (in contrast to last week’s 13 minutes or so) so it got extra attention focused on the presentation proper … which was appropriate … one bonus of OVA style eps is not being “imprisoned” by an episode length and thus added extra “stuff”. 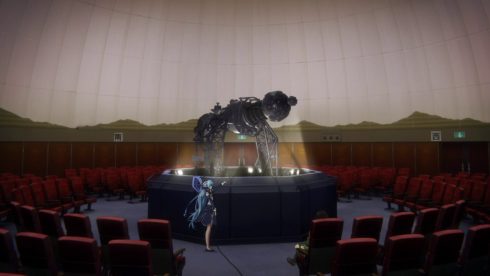 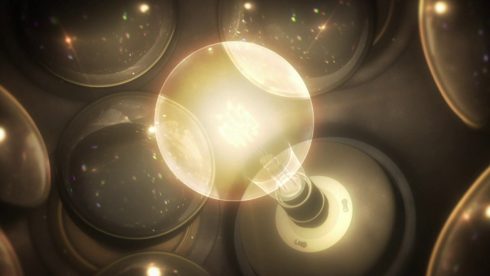 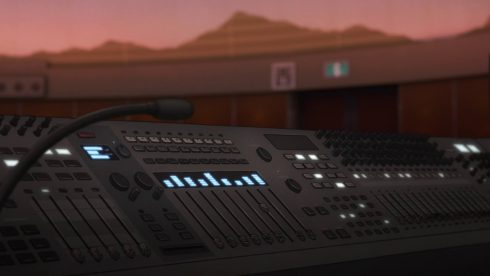 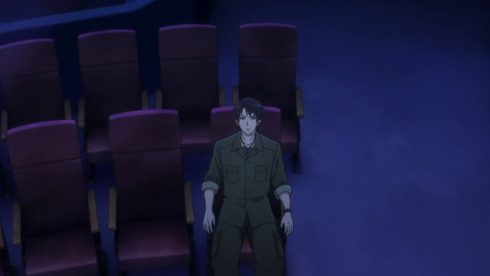 As expected, with the announcement at the end of the previous episode that Miss Jena had finally been fixed by the Junker and Yumemi is thrilled at the opportunity after all these years to give a presentation again. This episode really shone in communicating the … well … frankly what I felt to be compassion the Junker had for Yumemi – not only is “allowing himself” to be shown the presentation proper, but also realizing that Yumemi’s days are numbered with regards to power supply. That being said, he obviously found himself exposed to way more than he had expected – you can see that as things go on that he gets more and more engrossed in everything. 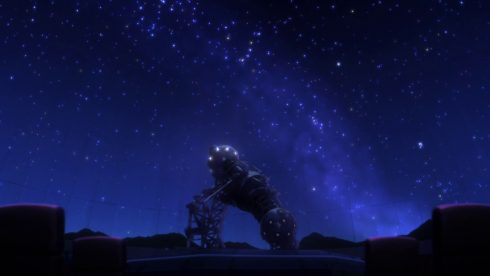 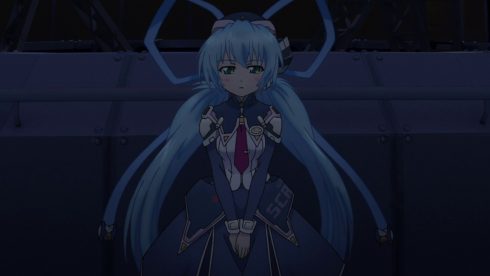 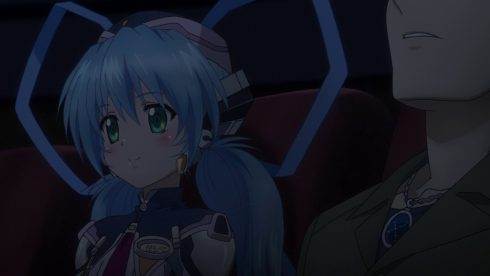 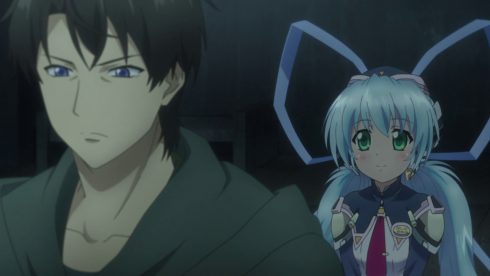 This was indeed one of the highlights of the entire story – the planetarium presentation itself while the lovely background music of the visual novel plays in the background … the piece is known as “Gentle Jena“, and is without a doubt my favorite piece in general from the soundtrack as a whole. Yumemi’s simple narration and the programmed light show itself blend together very nicely, and it acquires a powerful overall impact when you recall from time to time the mental formation and experiences the Junker has had up to now (that we have been shown, at least). In fact, the immersion is powerful but gentle (no pun intended) at the same time, so that when the power suddenly went out I felt myself jolted (again, no pun intended) out of Yumemi’s storytelling much more than I expected to be. 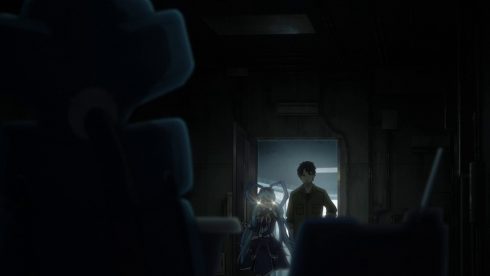 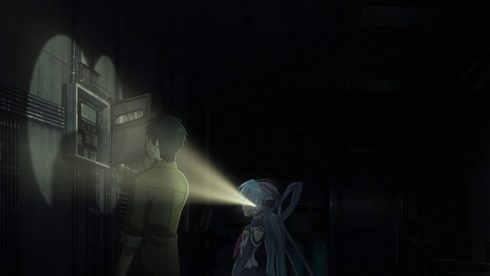 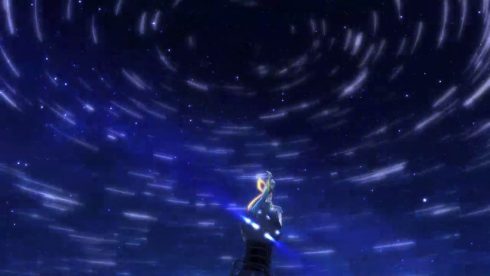 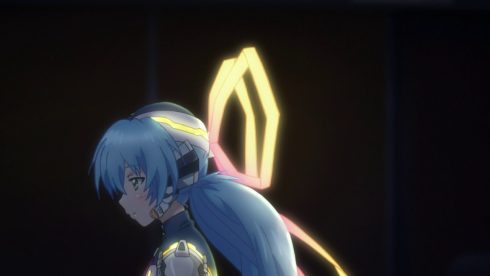 Curiously this cutting out of the power, while extremely ominous (Yumemi cannot even go back into “long term sleep mode” now that the trickle to the building is gone … I wonder who cut the power trickle off?) serves as the catalyst for Yumemi’s “special presentation”, and it is this one that blows the Junker completely away, touching something deep inside him and even evoking very old, brief memories of when he was a child and his mother was still alive … before “the rain” came and perpetually provided cloud cover he caught a brief glimpse of a brightly shining star (planet?) through a rare patch in the clouds as his mother spoke to him with a smile on her face. 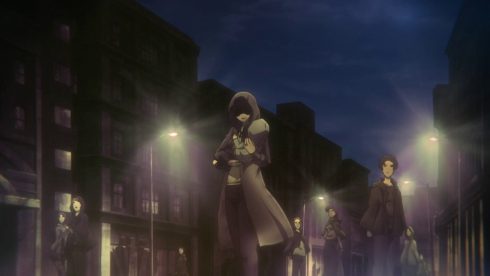 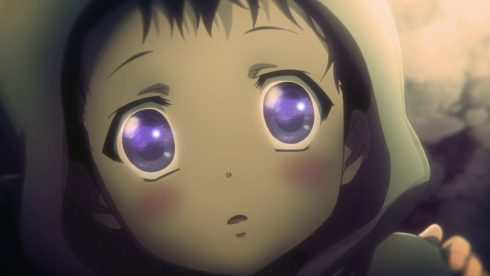 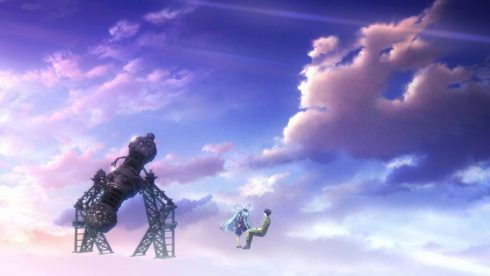 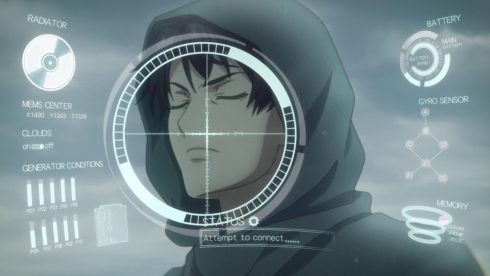 Essentially, the special presentation emphasizes the grandness of the created world on many different levels, and how large, vast and beautiful everything is we find ourselves amongst. Compared to this the very recent blip of this man -made “dystopia” the Junker and so many others have found themselves over the last few decades is very small. Very small indeed. And even moreso, Yumemi stresses and emphasizes her faith that “the simple things”, goodness, and all the things associated with our daily life throughout the millennia (and that we perhaps take for granted too easily) will eventually come back, be re-established and slowly grow and flower once again. It is definitely a refreshing and expansive reminder and series of reference points to be reminded of.

The final moments of the episode, however, are nowhere near as uplifting … once again we are imprinted with a moment of quiet foreboding as the innocent and cheerful Yumemi offers to guide the Junker “back to his vehicle” which is some distance away. One wonders if the Junker were hoping to part with Yumemi quietly and never see her again, but this offer of Yumemi means she will be exposing herself to potential danger as well – if from nothing else than from those attack robots. (I recall there was what looked like the leg of a large one shown in previous episodes?) With this possibility out there, and no power source to return to and … well … many other elements … things seem to indeed have taken a bit of a tense turn….