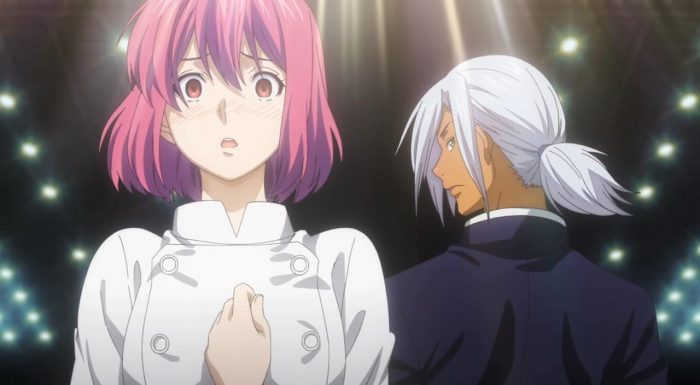 Was that really 24 minutes? Damn. That went by really fast. While you’ll generally hear me speak against rushing through content and fast paced episodes, I think this week’s episode was one of those exceptions to the rule. Hisako and Hayama’s match was just not one of the most thrilling prospects to watch, even before it started. So… To have the show kind of breeze through it in an episode, was a welcome decision as far as I’m concerned. And by kind of sidelining the title match of the episode, Shokugeki no Soma was able to build up to much more interesting things. 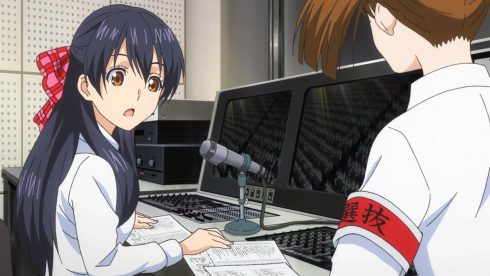 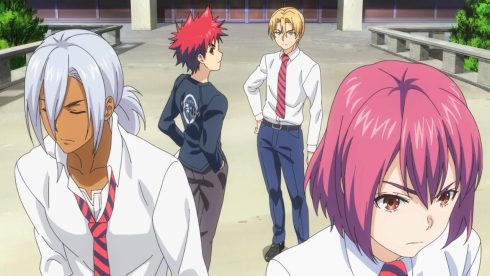 I realize that the show’s quick pace this week had less to do with whether this week’s match up was interesting, and more to do with the fact it only has so many episodes. Thus far, we’ve gotten one match a week, and while its problematic some weeks more so than others, I do find this a bit concerning. Soma and Alice’s match could’ve done with the 1.5 episodes of time it probably needed. Megumi and Ryo’s match, on the other hand, was right at that sweet spot, last week.

Speaking of Megumi and Ryo, it seems like the show ended up going the more believable route, as I had suspected. Granted, I was never “sure” that Ryo was going to win, but the odds were definitely with him. Megumi’s grown exponentially since we saw her at the start of the series, so seeing her go is sad, but not particularly unsatisfying. Megumi’s a first year, and she’s got another three years to basically reach her true potential. And the potential is great indeed, as Senzaemon himself finds that he’s gone full commando without even realizing it, post match. 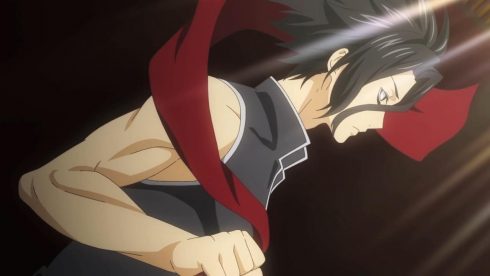 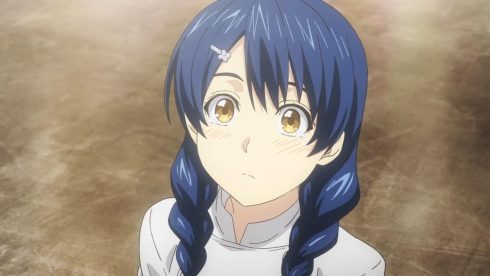 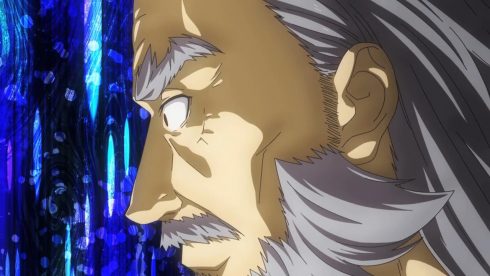 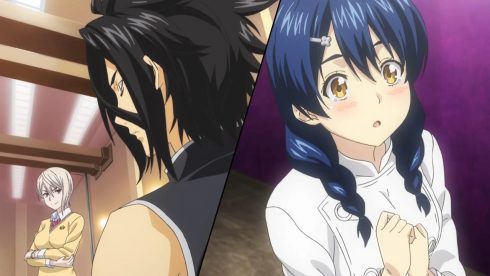 Is it bare chest or underwear-less, that counts for more? Who knows. The valid point is that, logically speaking, and from a progression stand point, Ryo is the one who wins. It definitely makes sense, because the final four are definitely going to be what you’d call “the big guys/gals”. Megumi just isn’t at the point, where she’s ready to tussle with those particular kids yet. Give it time though, as I think the audience, Senzaemon, and Soma are definitely expecting great things from her in the future.

And before I move on, I would like to say that, Megumi kind of being okay with what happened, was really nice to see. Megumi being content to have gotten as far as she did, is one of the many reasons why she’s my top pick for “best girl” in this series, and maybe even “best character” aside from Soma himself. She’s a nice, hardworking girl that’s also pretty self aware of her limits and keeps a positive forward moving outlook. Ryo, meanwhile, has a flawed point of view, and is set to lose sooner or later, and perhaps to Soma, anyway. Of course, while the results from the last match were notable, they really were just the appetizer, as far as this episode was concerned. 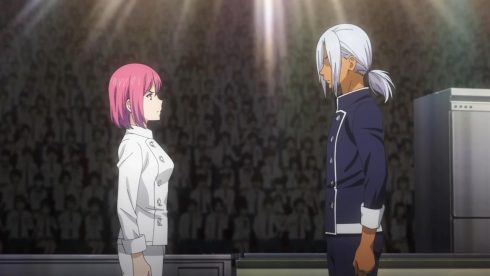 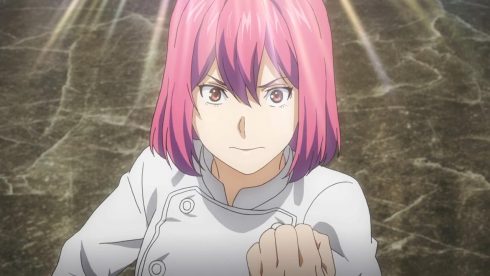 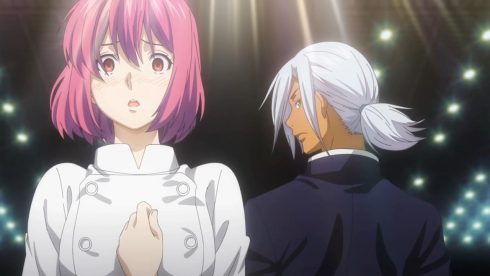 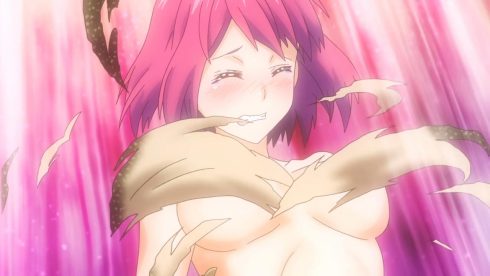 The so called main dish, was basically Hayama taking out Hisako with ease. This was probably the most predictable match we’ve seen from Shokugeki thus far, and I’m sure it didn’t surprise anyone to see Hayama take the win. Not only is Hayama definitely the better cook of the the two by far, but he’s just a more interesting character. Hayama himself puts it best, when comparing himself to Hisako. Hisako just doesn’t have the ambition or the drive to really compete with him. Her goals are simply too small. Aiming for second best, is playing a completely different ball game than those students that are gunning for being the best.

I’ll also freely admit, that I’m a bit biased, and don’t really find Hisako’s motivations all that endearing. The fact that she wants to win for her “Erina-sama”, a character that I’m not too fond of either, doesn’t help matters. Plus. Hayama used Turkish/Indian/Pakistani cooking for his “burger”, so I was definitely in his camp just by virtue of having tasted the stuff that he’s made. I’m a huge fan of Kebabs, Achaar (which is a sour, sweet and really spicy condiment) and Koftee (Which are actually meatballs from where I’m from). I’m not entirely sure using Pita bread counts as a bun though, and whether it makes what Hayama made a burger. It’d be more in the wrap, roll or Shawarma range rather than a burger, IMO. 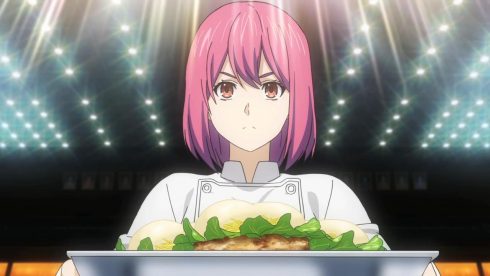 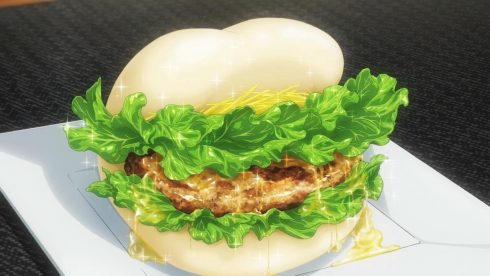 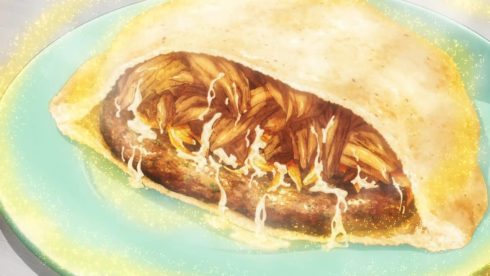 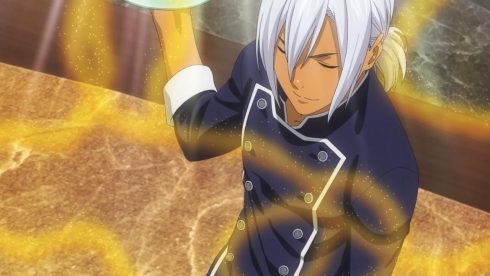 I suppose Hisako was using a steamed bun, so this was one week where Shokugeki no Soma was really just using the theme as a guideline, rather than a strict set of rules. I’ve never had anything turtle before, so I can hardly even imagine what Hisako’s burger tasted like. It looked nice, and definitely had a very inviting look to it. It also, probably looked more like a burger than Hayama’s and I’d almost say that Hisako could have cried foul here.

Speaking of which, I don’t think I agree with Hayama’s whole “a burger must have pickles” shtick. I’m not sure if that’s how a burger is viewed in Japan, but not everyone likes pickles here in the United States at least. More often than not A burger just needs to have a bun, lettuce and a beef patty inside it. Yes, that’s important to note here, because its very rare that I find myself questioning Shokugeki no Soma’s food vocabulary and knowledge. I suppose this entire match was just never going to be that impressive. 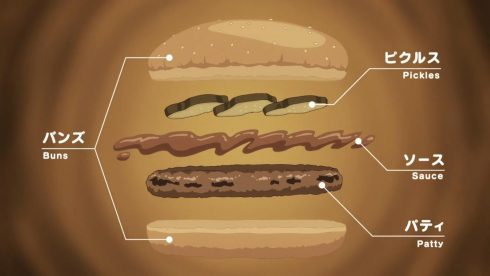 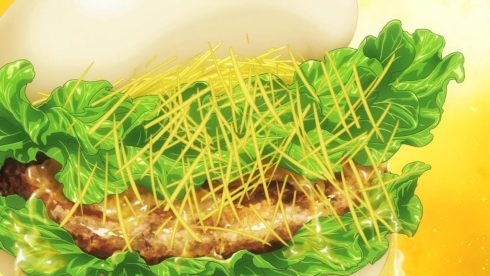 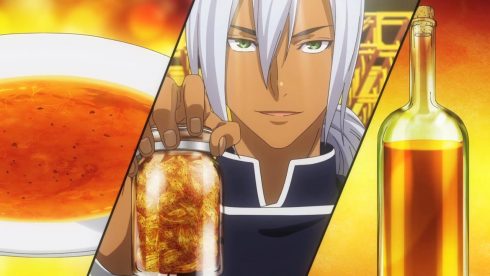 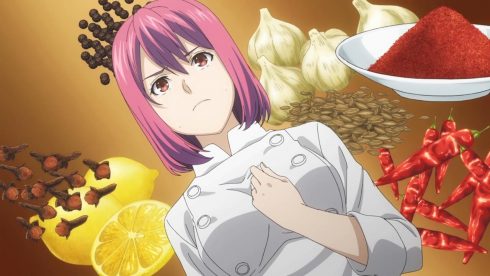 So Hisako loses to Hayama, and by the end of the episode, we’re prepping for the next major match, which features none other than Soma rival, Aldini taking on Mimasaka Subaru. Don’t blame yourself if you have no idea who that is, because this week was indeed the introduction of that character. It seems that in between seasons, we did have Subaru make it to the finals, and reach the fourth position in the previous round.

This is really the first real case of Shokugeki no Soma skipping over content and retrofitting it rather awkwardly. Subaru is being positioned as what seems to be a true villain, so its unfortunate that we didn’t see him until this week’s episode. Even more so because of how good of a villain Subaru is turning out to be. He’s breaking the typical “ruffian” stereotype in some areas, and outright embracing them in others. 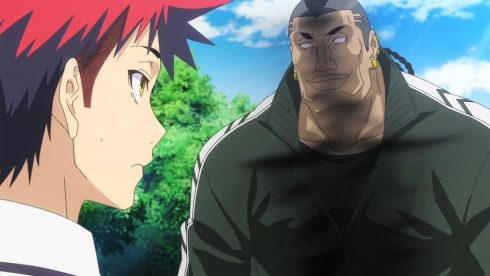 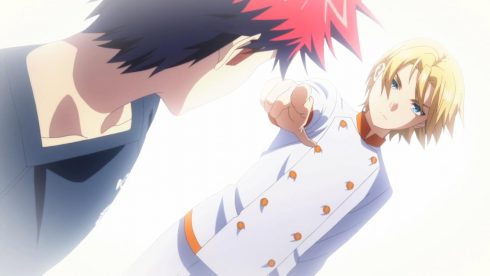 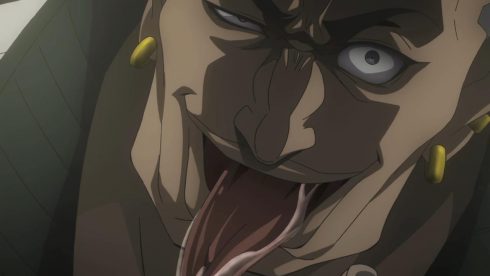 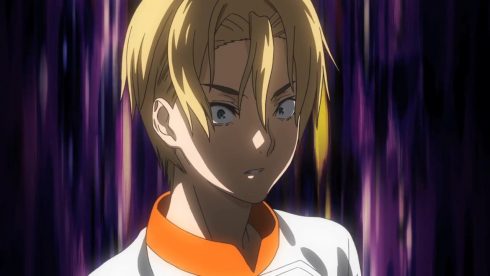 The fact that Aldini is his first victim, is unfortunate, because Aldini has the least amount of self control and a lot of pride. Manipulating Aldini ends up being fairly easy for the especially informed and detail oriented Subaru, and the episode itself ends in quite a shocker. The next matchup between these two? Its going to be a Shokugeki.

A shokugeki means raised stakes, and I’m really curious to see what each of the two contestants are putting on the line. Its clear that Subaru doesn’t just want to rile up Aldini to make the situation more advantageous for himself, he wants to flat out destroy his opponent. Surprising no one, Aldini does get easily goaded into whatever scheme Subaru has planned, when his brother is mentioned. Raised stakes, interesting characters, a clear villain and hero about to tussle, its all pretty exciting. 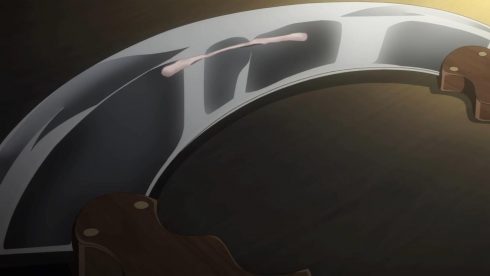 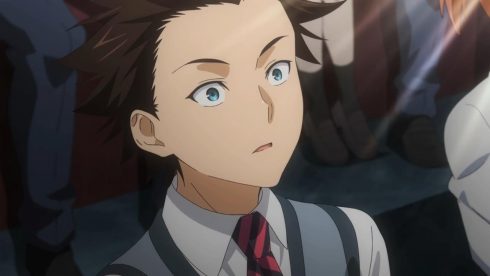 Overall, I’d say this week’s episode really felt more like a toss up between a rushed, predictable match, and a decent chunk of setup for the future. There wasn’t a lot of earth shattering stuff this week, but I think the episode still worked and was definitely fun to watch. Added to that, I can also really appreciate this second season for glossing over things that aren’t entirely important. One of the problems for the first season, especially in its final stretch, was the fact that it dedicated a decent chunk of time to matches and characters that were definitely B-Tier and boring. With Hisako gone and out of the way, I do believe that next week will have the story train really steam on ahead.