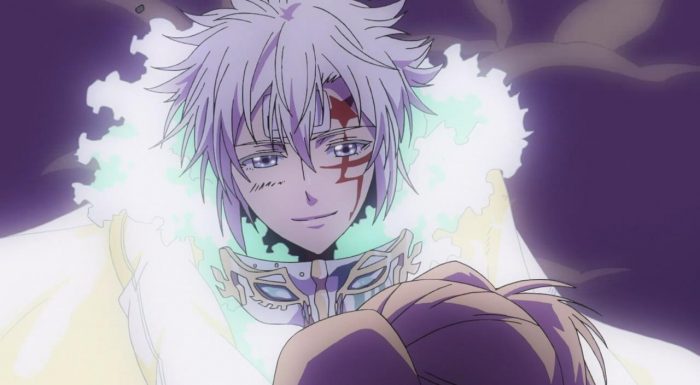 After a rocky start, you’d think D.Gray-man Hallow would really bring it with its second episode. The bad news though, is that that really wasn’t the case this week. As much as I hate to say it, I’m seeing some real similarities between D.Gray-man’s big return to the animated medium, and another equally dormant franchise that recently made its return, Berserk. Both adaptions seem to be making the same mistake of cutting content out, and rushing through their source material without going through the motions of setup and establishment. That mistake, well… its inadvertently hurting the core story itself. 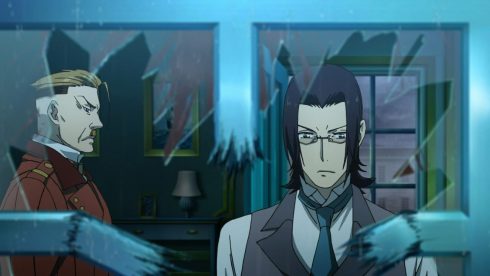 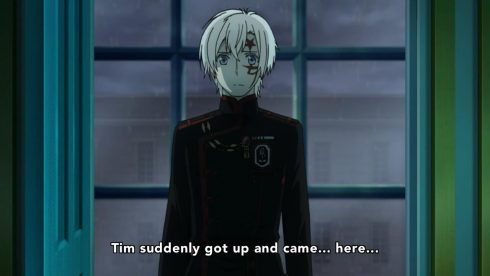 The chief problem, with this second D.Gray-man series is that it really does feel hollow (which may have been a more apt subtitle). There’s no love or care for the source material here, and no effort to actually do it justice. Perhaps even more so than that, there’s just a distinct lack of command on storytelling itself. The big rule in experiencing any story, let alone telling one, is to simply not skip stuff, and go through everything in order.

Skipping chapters from stories, or in this case, the source manga, creates a very jarring, disconnected experience. To echo my sentiments from my Berserk episode 2 post… While I think it was excusable to move stuff around in the premiere  of the series, its less okay to do so in the second episode. D.Gray-man Hallow, however, pulls the same exact stunt two times in a row, and skips an entire chapter of its current story arc. The setup that would normally get the story going, is relegated to a few key flashback scenes and leaves viewers to mostly connect the dots by themselves. 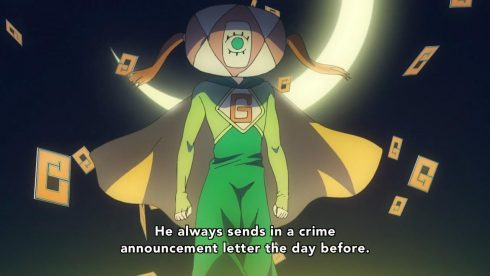 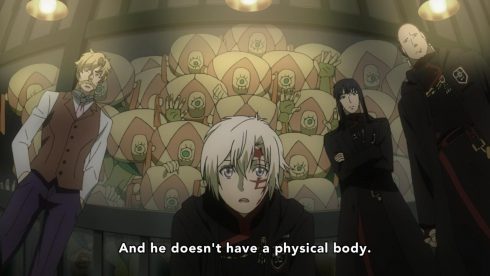 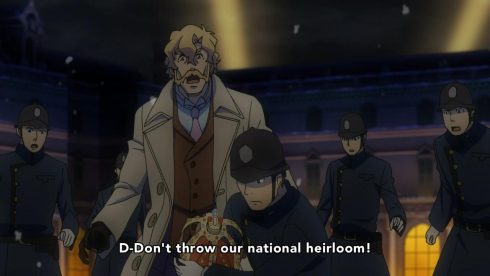 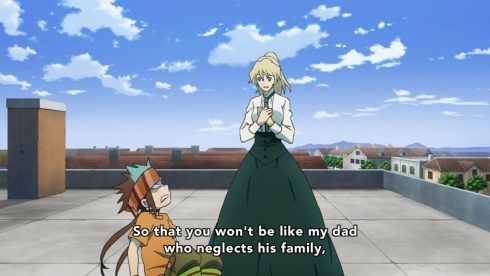 Yes, while the episode’s story moves faster, and is kind of comprehensible, it also loses a lot of its atmosphere, character and heart in the process. The whole notion of who Timothy is, what his relationships to Emilia and her father Galmar are, are all just lost in translation here. Its hard to be attached to, or appreciate these characters and their story, when the necessary groundwork to develop and establish them, is just absent. By cutting out that one, seemingly inconsequential manga chapter, D.Gray-man Hallow ends up neutering the whole concept of the Phantom G Thief arc, and its central character Timothy.

Timothy’s story is one that, for all intents and purposes should be tragic and heartfelt, but actually just ends up being kind of boring really. And again, Much like Berserk, there’s some good ideas in here, that just don’t really make their way to the surface. Timothy’s whole story of being used by his father, being taken in by Galmar and the Orphanage, and his subsequent graduation to adulthood before he’s really ready, is a strong recipe for engagement. 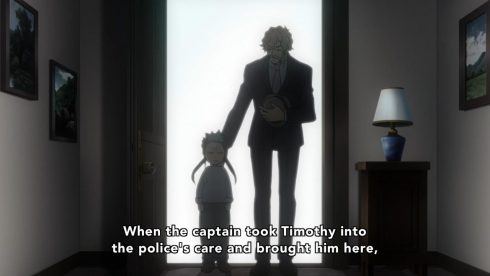 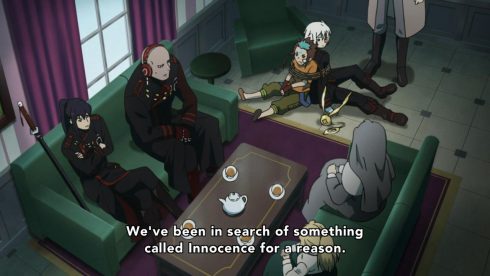 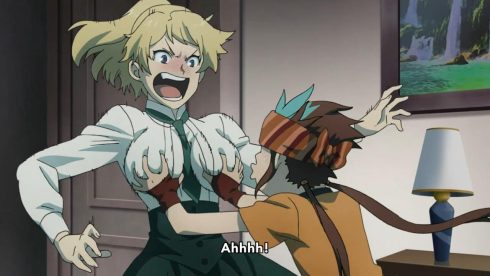 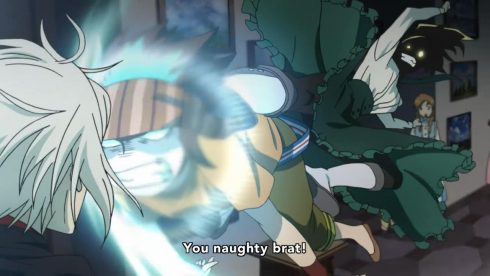 Yet, because we never get to meet Galmar properly, or see much of Emilia before she’s basically bossing Timothy around, these characters end up falling flat and being really annoying to watch. The fact that I cringed multiple times as I saw these characters become little more than stereotypes, shouldn’t come as much of a surprise. Timothy became the typical troubled kid that’s a bit of a pervert but has a kind heart, Emilia became the typical bossy doting sister, with the orphanage that the two reside in becoming little more than atypical failing establishment in need of financial saving. It all just becomes fairly standard and unimpressive instead of being even remotely interesting.

To add insult to injury, the stakes for the Phantom G arc are never established. We don’t really get to see all the people that have been messed up because of the Phantom G thief, or get a nice lingering look at the problems that this thief has created. We get a quick flash of a scene, as Allen basically talks down his enemy, dehumanizing him and the story in the process. And this lack of emotion just carries on over when we get into the second half of the episode, and find out that the Phantom G thief is a kid named Timothy. 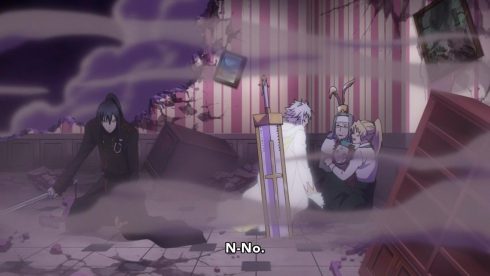 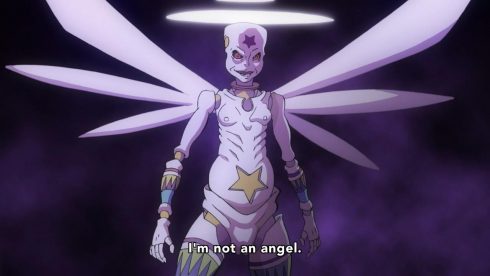 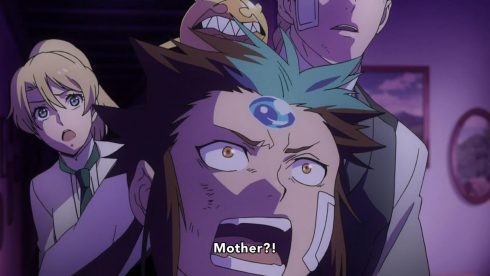 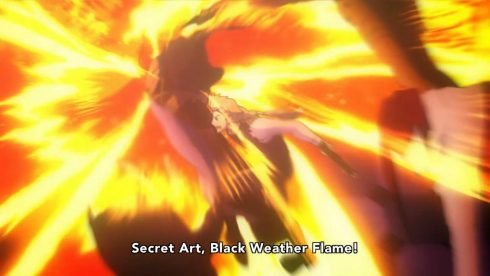 Its not long before, the Akuma want Timothy for his innocence. The intent here is to care for understand how Timothy’s a flawed, trouble making kid that’s just trying to do the best he can. I get that, and I know that the show wants me to care but… I really don’t. Timothy as a character hasn’t had the time to really grow on me, and the orphanage residents are barely in a scene or two before they get taken out. So any connection I have to the primary thing that Allen and the rest of the Exorcists are fighting for, is virtually non-existent. And if I’m not invested in what’s going on, on screen, then I think the show has failed in its very basic function, which is to keep me interested and entertained.

That really is the major problem with D.Gray-man Hallow, as far as I’m concerned. It just fails to grab you, or incite any kind of meaningful response. The reason for why that’s happening is fairly obvious, as it generally is with adaptions like this. The show is constantly in a rush to get to whatever it thinks is the “good stuff”, but a story can’t function like that. A story has to be a combination of peaks and valleys. The slow upward trek from the valley all the way to the peak, is the very important element that bridges both points, and makes the eventual destination actually worth something. 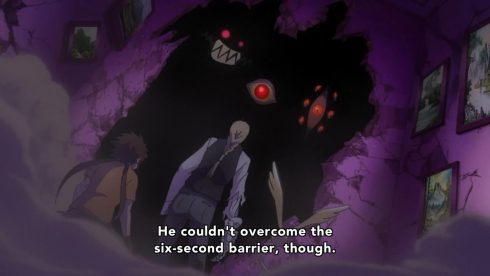 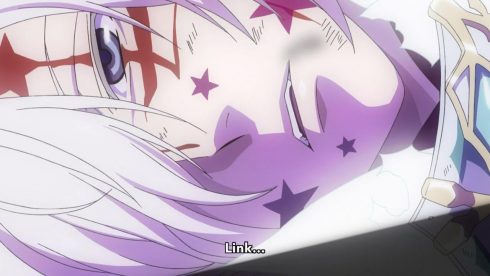 As of right now, I’m getting serious deja vu from D.Gray-man Hallow, and its the wrong kind of deja vu at that. D.Gray-man Hallow reminds me of InuYasha: Kanketsu-Hen, in how its just super fast paced, and skipping stuff left and right in order to adapt a bundle of chapters in a rather small amount of time. It reminds me of Durarara!!x2, in that its a disappointing followup to a rather notable and beloved franchise, and one that’s just leaving me cold. And of course, the parallels between this show and the current Berserk adaption are pretty evident, except for maybe the fact that D.Gray-man Hallow has much better production values.

I hate to say it, but I think the decision to continue D.Gray-man Hallow as a one cour series has made it a series that was pretty much dead on arrival. I personally don’t think that D.Gray-man Hallow is going to be anything short of disappointing now, because that’s the impression that I’ve gotten from the first two episodes. I hope to God I’m proven wrong, and I do realize that it is fairly early in the game. There is still time for the show to course correct itself. Based on past experiences, however, I’m not holding my breath.