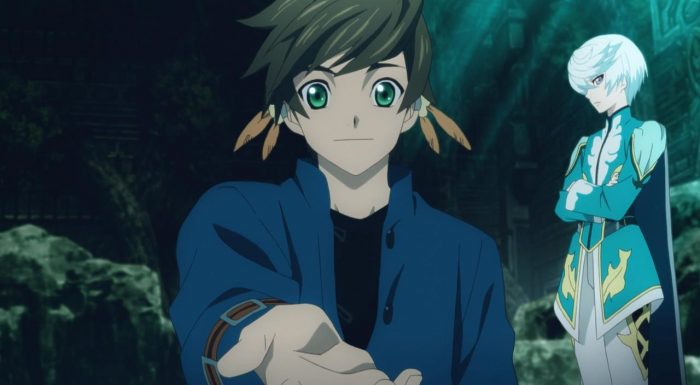 So far so good I’d say. Tales of Zestiria The X continues to take its time, slowly and carefully weaving all the threads necessary for a strong story. One of the most impressive aspects of this adaptation of the game of the same name, is the fact that it really does add a lot of stuff into the story. And these little additions don’t detract from or change the story, they just add more context and actually help the story flow better. I don’t think I’ve ever seen such a fine example of adding to a story in order to make it work better in the Anime medium. 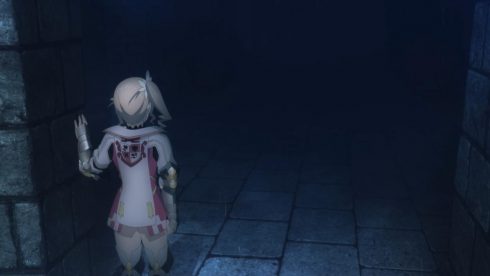 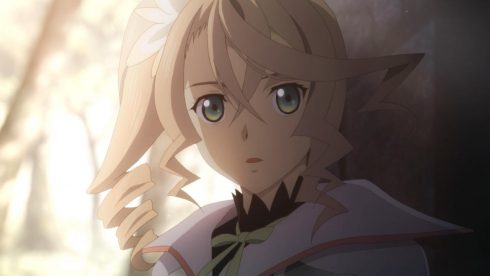 While I’m sure some viewers are finding Tales of Zesteria The X a bit slower than they’d like, I’m loving it. I revel in the fact that that the show isn’t in any kind of hurry, because I feel that too many adaptions these days try to short-cut their way towards whatever the quote-unquote “good stuff” is. As any writer or follower of fiction worth their salt will tell you, however, its the setup and the slow start, that generally lends itself well to an impressive and interesting story as a whole.

And I think, as a game, Tales of Zestiria didn’t have the luxury to take its time, and really setup its story. There’s an expectation from RPGs, and video games in general, to give control to the player as soon as possible. The medium is different, and the story itself needs to be balanced with gameplay. The end result of that limitation is the fact that certain things are just left to the imagination. 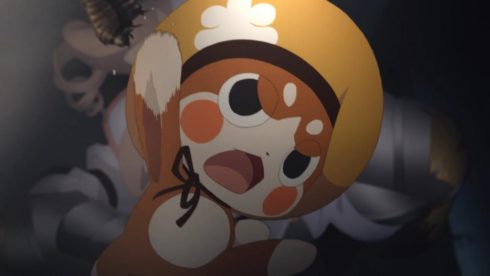 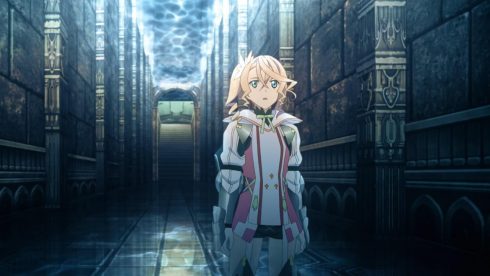 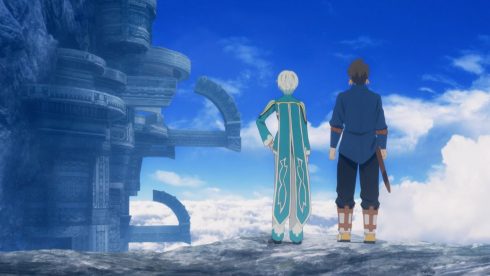 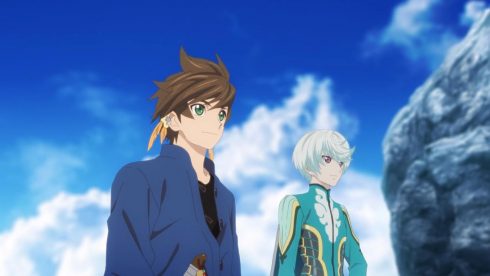 In the game, for example, There really is no background to Alicia’s winding up in the ruins. The game actually opens up with Sorey atop the ruins, and falling into them with Mikleo soon after. Then its not long before they come upon the unconscious Alicia. The anime though? It actually charts Alicia’s entire journey, and the horrors that she faces before she winds up unconscious. Its a little detail, and might even be unnecessary. For game fans coming into the show will full knowledge of the overall story, its nice to get that extra connective tissue that was lacking in the actual game.

I know it may seem like Tales of Zestiria is crawling right now, but I can assure you that the story is going to pick up in a rather impressive way soon. These moments of quiet, and sombre exploration are few and far between once the actual story gets going. 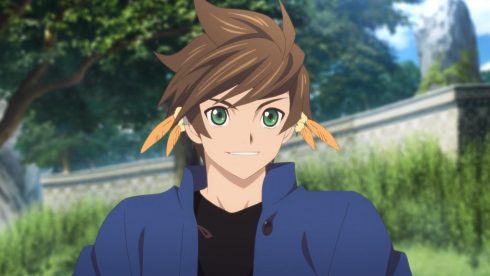 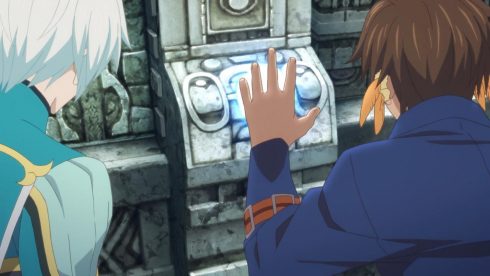 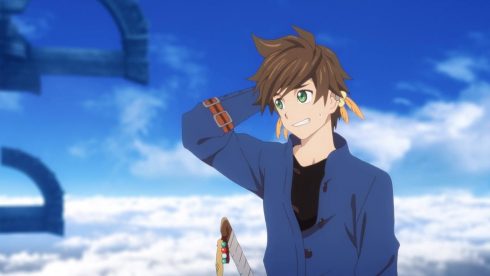 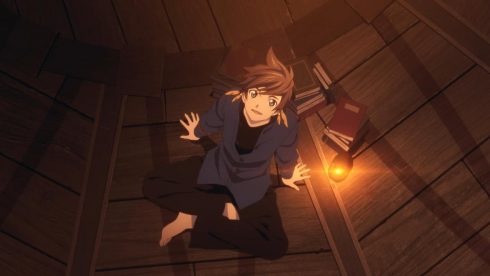 For now though, we do get our first introduction to the story’s hero and real protagonist, Sorey. Sorey’s one of my favorite Tales leads, if only because of how positive, cheery and optimistic he is. There’s a quality to him, that’s just bright and energetic, without even remotely getting towards annoying. The boyish charm, that sense of exploration, and the want to help others and experience new things, is a welcome change of pace from typical main characters of these kinds of stories.

To often we’ll go into the hero’s journey with regards to most stories. And while Tales of Zestiria does indeed follow the Hero’s journey quite a bit, the fact that its main character isn’t emotionally damaged, and is a happy adventurous guy, is a big plus in my eyes. But I think Sorey by himself may have not had the impact that he does, if it weren’t for Mikleo. 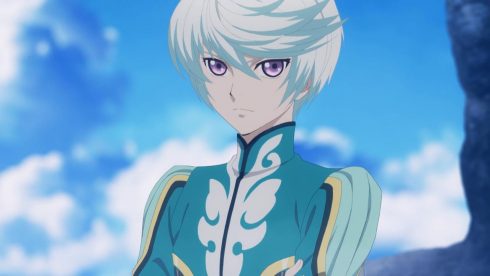 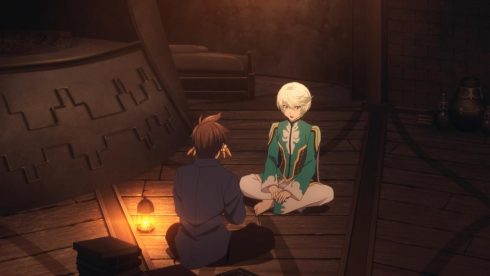 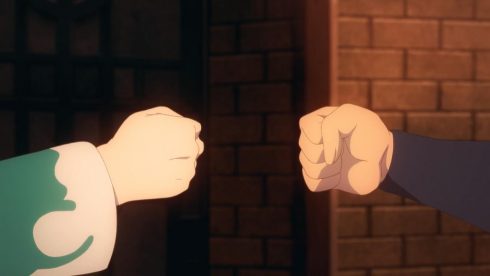 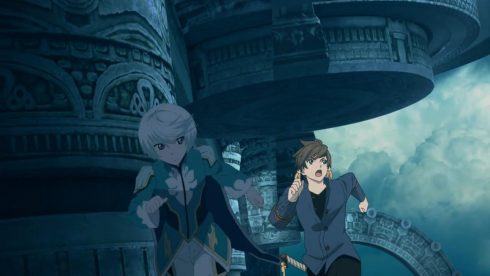 Mikleo is Sorey’s best friend, and a kind of brother to him. That’s about as much as you can get from this first episode, but I’d say that their dynamic is one of the highlights of the story, and even in this first episode, the friendship definitely shines through. If Sorey is the type to just run into a situation, then Mikleo is the calm, collected and careful type. And as the episode itself kind of shows, the two work well as a team, and compliment one other’s faults and strengths.

Beyond just introducing us to two of the primary characters, this episode also gave us our first real insight into the lore of the series. The whole idea of the Seraph and their relationship to the humans, plus of course the Shepherd. While the first prologue episode definitely hinted at some things regarding these topics, and referenced the Celestial Record, it was this week that we actually dove fairly deep into it all. There’s more to come obviously, but of particular note was the glove that Sorey found, as well as the murals and the talk about the Shepherd himself. 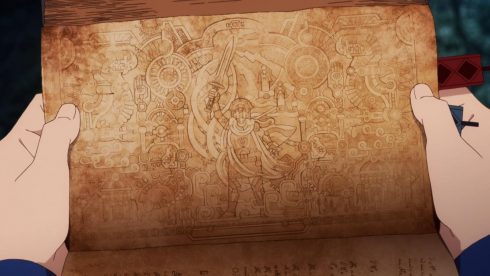 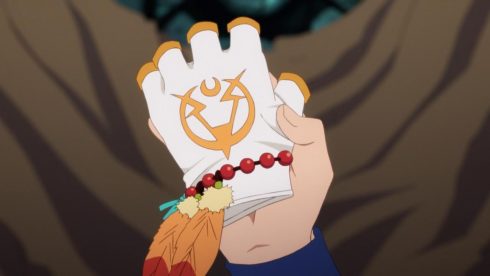 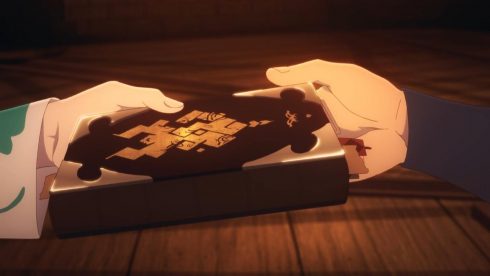 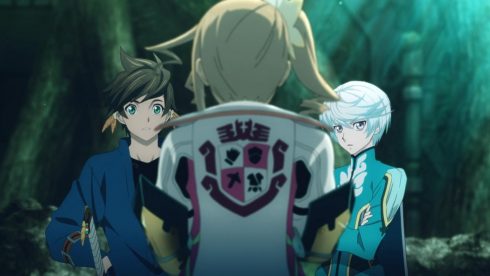 Alicia’s big question at the end of the episode was  a bit on the nose, but I can’t fault the anime for cutting to the chase a bit, when it spent all this extra time expanding on other parts of the story. Hopefully there’s less of a give and take, and more of a just give, but this little change might be better for the story later on. Any change that’s been made thus far, hasn’t been bad, so I’ll continue to give the show the benefit of the doubt.

The one other thing that I’d like to mention, and one that I guess I was surprised by, was the lack of monsters in the ruins. In the game, this first area is a very small, quick dungeon, and you do end up fighting some enemies in this area before leaving it. Its an odd choice to remove that particular aspect of the game’s DNA, if only because I feel like a fight with Mikleo and Sorey would’ve been nice to see. I’m sure as we move forward, we’ll see more of this world’s monsters, but it was a difference, and a particularly noteworthy one. 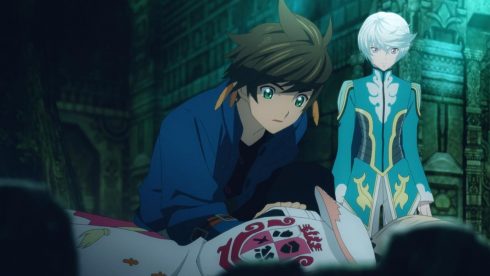 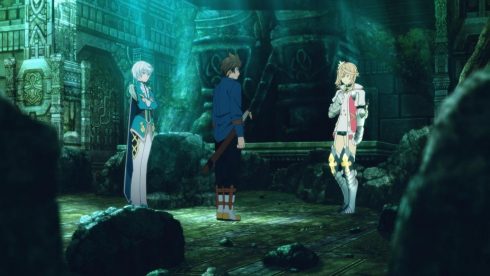 So… At the end of the second episode, I’d say Tales of Zestiria The X is continuing to prove itself as a good adaptation. The additions and expansions to the core story are welcome, and while its taking its time to really get going, I’m confident that this show will continue to satisfy and not disappoint. 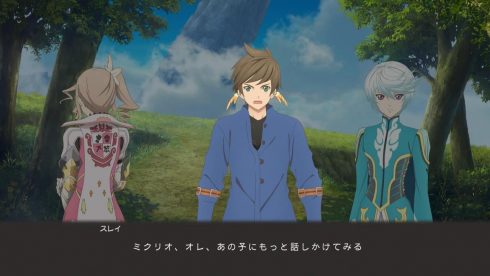 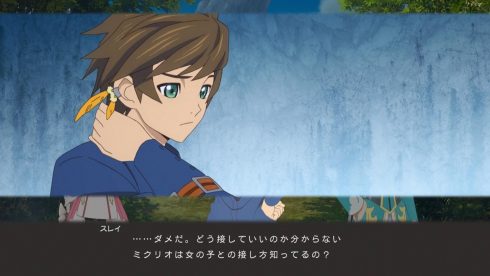 While I’ve gone away from covering Previews or Opening and Ending themes, I will say that I did like the preview this week. The Preview took an aspect of the games that is always missing from the anime adaptions, which is the character skits. At save points in the games, you’ll have these short comedy conversations between the various characters, that serve to flesh them out and provide insight into a particularly unknown aspect to them. The fact that the previews are using this format, and providing some nice original jokes, is a nice little nod to the games, and a big fanservice for fans. Yet another example of how to do a Adaptation right.