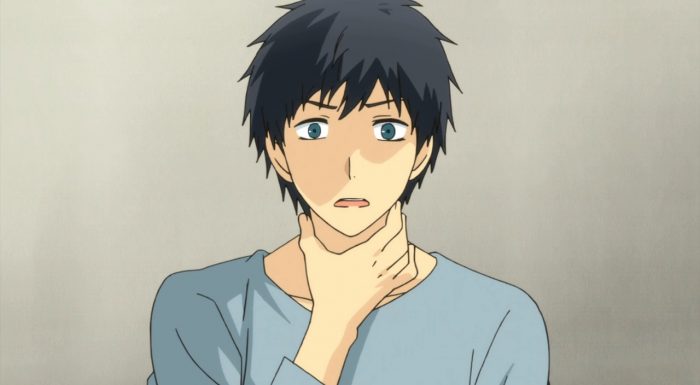 Yep, this episode was about as tough as one would expect. Everyone kind of dealing with difficult situations here. An injury leading to a damaged friendship and the echoes from that even shook up Arata and Hishrio. Those two having to face the ghosts of their past and find the willingness to decide to get involved even knowing that there might be nothing they can do and it might all just fall apart if they do get involved. 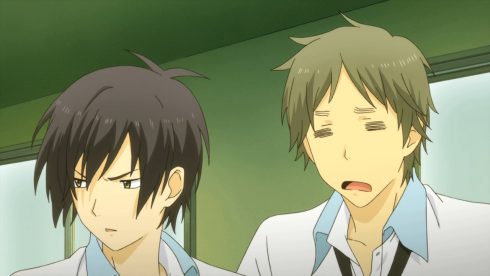 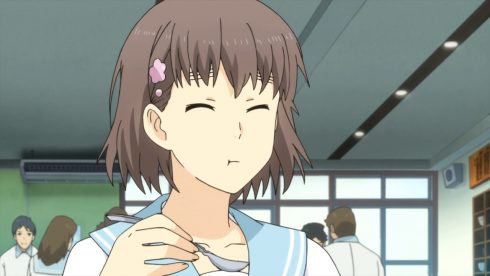 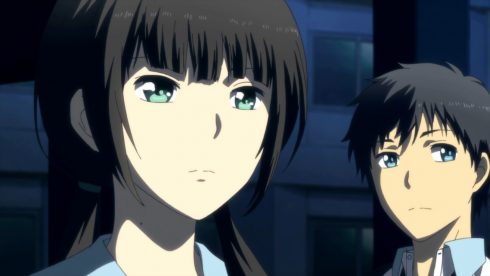 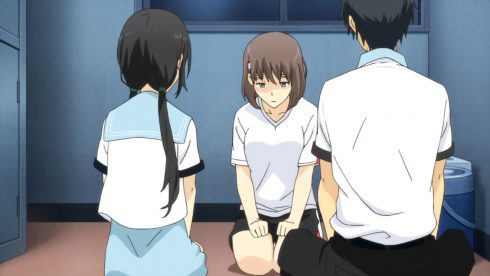 While I think it’s good that Honoka has good friends….I kind of wish Inukai would fall off a cliff. That guy has an ungodly horrible personality that is going to get him in jail someday. I think he needs an arc in this story to deal with his issues at some point. It’s one thing to be protective of your friends, it’s another to be this guy. This is the type of person who I could see walking into a place where Honoka works in the future and beating up her boss for not giving her a promotion. The tunnel vision on this guy is beyond belief. He literally only cares about Honoka and could care less about the people Honoka herself cares about. His first plan was on the next day to basically bully Kariu into apologizing to Honoka. What the heck was that going to accomplish? All it’d do at best is get a fake apology from someone Honoka feels guilty for getting injured.

I’m not saying you have to care about all the people your friends are friends with. That’s just a spider web of relationships that is tough to keep up with. But one of her best friends? Yeah, maybe should try not to bully that person. All the more so if he’s trying to win this love triangle situation, probably not a good idea to make Honoka upset about how you are treating her friend. The guy just creeps me out. That kind of temper and not giving a damn about anyone outside his interest is scary. Hishiro has a problem remembering names or being interested in other people, but she’s not violent about it. 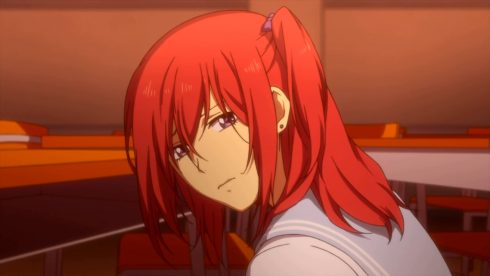 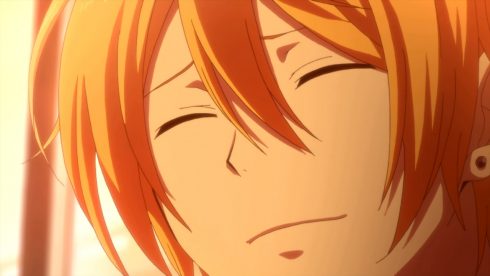 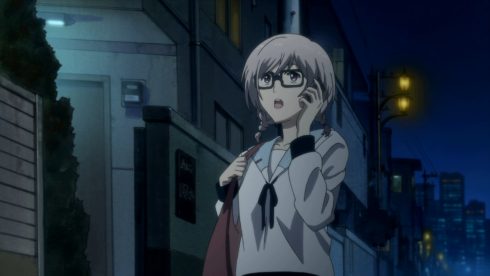 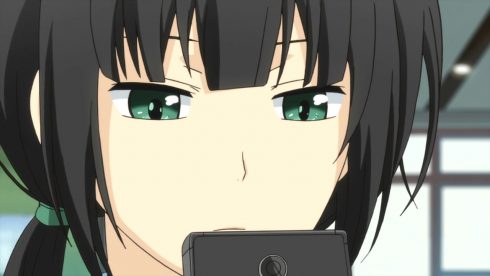 It just seems so pointless when you have Kariu frankly hating herself far more than anyone else in the episode could. Don’t need Inukai basically kicking someone who is already down. Kariu is already sick of herself and how her personality causes damage all over the place. Being overly harsh with Oga who is one of the last people she’d want to lash out at….the day after she lashed out at the other person she’d never want to be like that with in Honoka.

In the end this status quo isn’t a good situation. I certainly agree that intervention is actually a better option. Though I personally prefer Hishiro and Arata’s polite discussion with Honoka than kidnapping….But ignoring that, neither side is really set to deal with this. Kariu is too busy feeling down and hating herself to reach out to Honoka who she ripped into. While Honoka doesn’t have the courage to reach out to her friend whom she feels guilty for indirectly getting hurt. Kariu is someone she wants to stand beside, but she can’t bring herself to be that selfish. 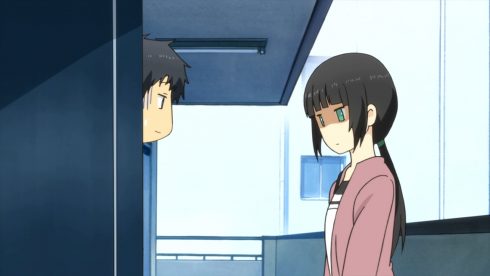 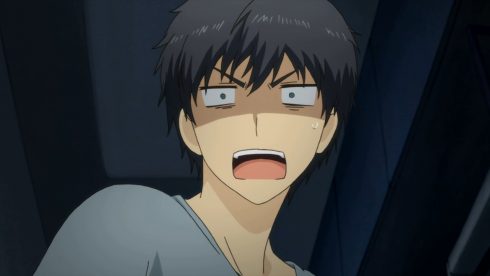 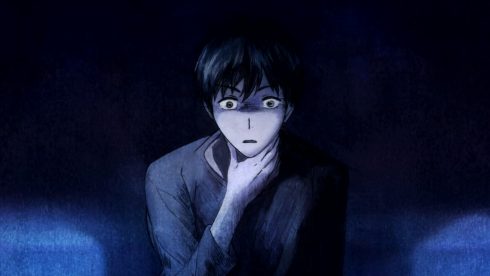 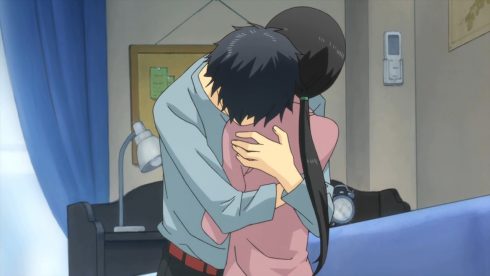 It was a good moment for Hishiro and Arata. More of a moment where both can somewhat openly talk about what has happened to them in the past and some of their personal traumas. Hishiro having faced the reality that if you step into a bullying situation you may not be able to simply resolve it. Things only got worse and she was unwilling to make any further efforts after being told down by the victim. In the end that person transferred away. It’s not the worst possible result, but it is a frustrating thing that Hishiro’s efforts failed and in the end the only resolution was the victim having to up and leave. Though it is realistic that sometimes bad people win in society.

Unfortunately Arata’s situation is even more depressing, though realistic. His sempai’s co-workers treating her terribly and losing any interest in competing with her and having fun with work. Instead they became losers who could only get their kicks from intentionally harming the business and harassing their co-worker. Understandable that someone like Arata wouldn’t be able to stand that and would want to get involved. He’s the kind of person who tries to step in and deal with situations. Sadly it failed here. And that failure clearly had horrific consequences. It’s not hard to imagine what Arata found in that room that traumatized him so completely. It’s just kind of sad that the victims are so beaten down that they’d just prefer to leave the harassment at that level and wanting no intervention so it won’t get worse. And that someone can be driven so far into a corner….It’s certainly an example of how terrible people can be. 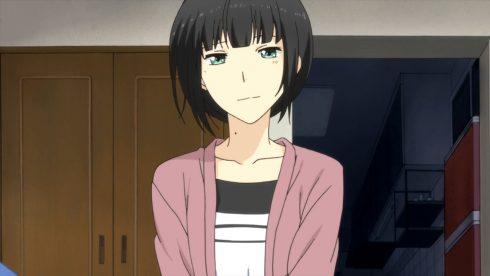 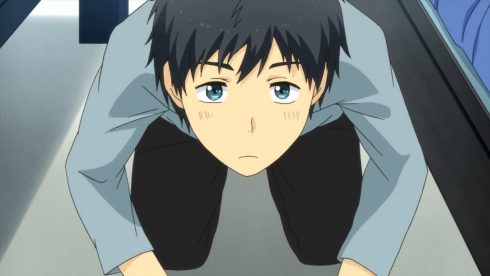 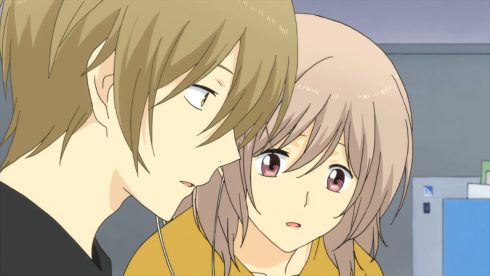 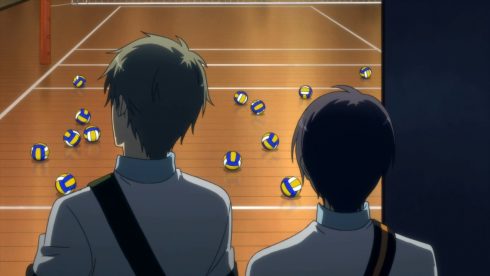 The end result being that Arata really did lose it for a moment there and it shows how terribly deep those scars are. He may revive his spirit at this school, but it’s a long road to dealing with his trauma. While you can be happy with that hug….you can also just see it as a sad moment. Arata has been that hurt and struggles to get past it. Of course Hishiro was just glad that he came back to his senses and returned to the person that she cares about. You always want to see your friends be the kind of people that made you like them in the first place.

Now we’ve got a kind of intervention. Can get the impression that basically Honoka will spill her guts to Arata and Hishiro and Kariu will get the background story on her friend. Whether that will resolve everything I’m not sure. It’s a hard thing. I’m not sure this won’t just leave Kariu hating herself even more than she already does. Let’s hope for the best here.