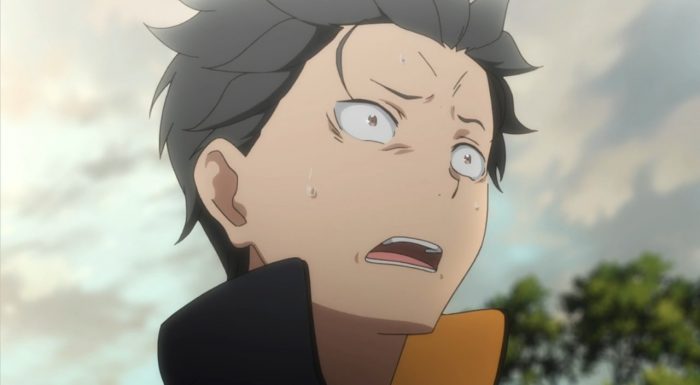 What!? I mean holy crap show, can you lay off my emotional state just a little bit here? This was a total ride through a storm of despair. Give the show credit…the episode was titled well. “The Sickness Called Despair” indeed. Holy….damn…crap. It’s going to take a bit of time to just process how utterly terrible things have gotten. I have no idea how the heck they are going to deal with this disaster. This isn’t something that can just be solved by a Subaru suicide and just working to resolve the situation. First, we don’t know where his save point is right now. Second, he’s not in the right mental state to do that. It’s not so much a problem of him utterly shattering mentally, but his mindset is wrong. He’s failing to understand the people around him and making a lot of bad choices. 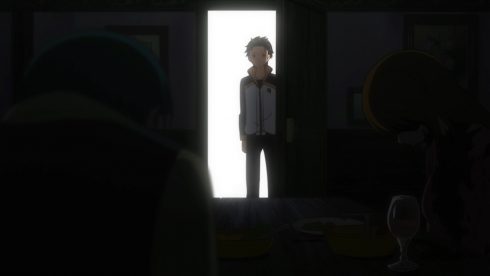 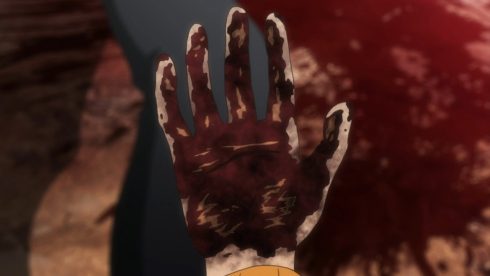 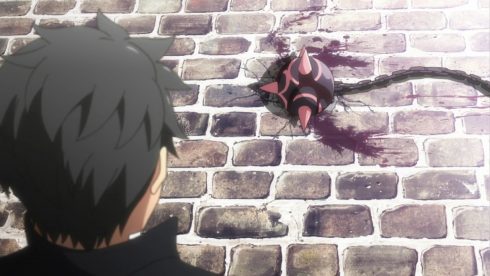 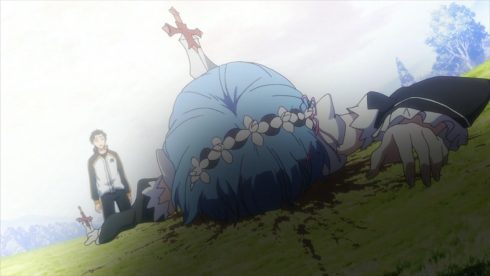 Talk about a deadly end to the episode. I was unsettled just watching those last few minutes. The villagers dead, corpses piled up and burned, and the massacre at the mansion. This was just utterly horrible and monstrous. Honestly you only needed to see that much. Seeing Rem dead on the ground was enough to create the impact and despair. This was just painful. I mean you could tell it was coming, it had to, and it just had to. It was downright creepy and unsettling when those cultists showed up. Of course those scumbags were there and responsible for this. And it makes sense why they didn’t kill Subaru. Beings like them should be able to sense the smell of the witch on him. Thus why they kind of respectfully bowed before running off.

I’m just not sure how to read all this. The mess and tragedy is going to take a bit to process through. Can somewhat understand Rem being taken down. Those monsters did slaughter a village of her people so they can certainly handle someone like Rem who is powerful, but not an extremely powerful Oni. It does make you wonder if Emilia is alive still along with Ram and Roswaal. I mean if the cultists left then…but at the same time Roswaal is pretty darn powerful so it’s hard to see him going down. Especially since Beatrice would also be there. But if they attacked with that in mind maybe they had the forces necessary to pull this off. I just don’t know. The bad thing here is that Subaru now has to die this arc. I did wonder if he maybe could get through one without having to repeat, but there’s just no way. Rem can’t be allowed to die here. 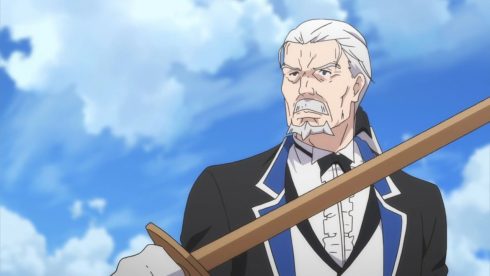 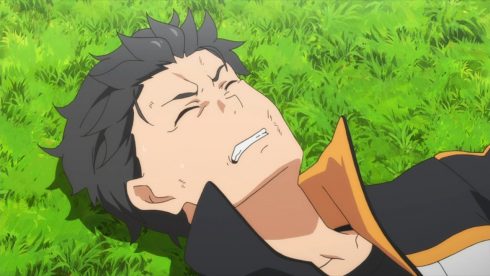 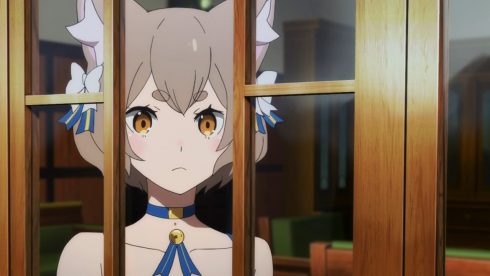 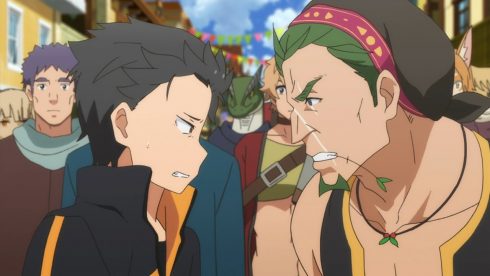 This episode really was all about things going from bad to worse. It’s just a shame that Subaru isn’t able to see everything clearly. I understand his feelings. He still has a lot mental trauma that he’s carrying around. He’s probably also very frustrated at how physically weak he is here. He’s in good shape for a modern world guy, but there are real monsters in this world and he’s struggled to stay alive (and often failed). The beating by Julius just added to that. It was another hard slap of reality and that he isn’t strong enough. And it also just stems back to what happened in the previous episodes.

The mess is partly about communication. Emilia didn’t get across her situation or how she felt about Subaru which lead to him making poor choices. Subaru himself hasn’t communicated that well either. Now he does have limits because of the curse on him, but there are things he can try to express. All that lack of proper communication lead to that emotional blowup where Subaru said a lot of dumb things in his venting rant. And he’s basically just continued on from that. Blindly straining to get stronger and I agree with Felis that it’s mostly just comforting himself. Getting beat up, knocked down, it just feels like he’s doing something and says to everyone “see I’m good, I can keep going.” 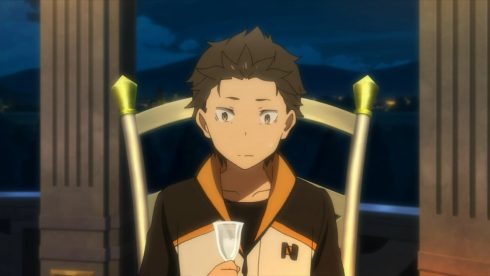 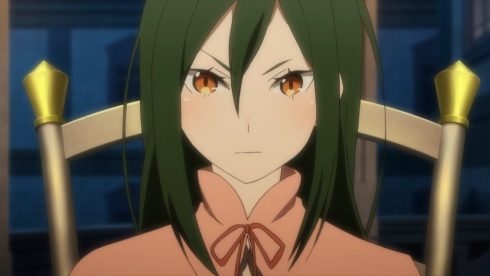 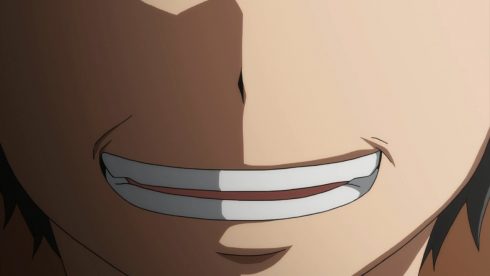 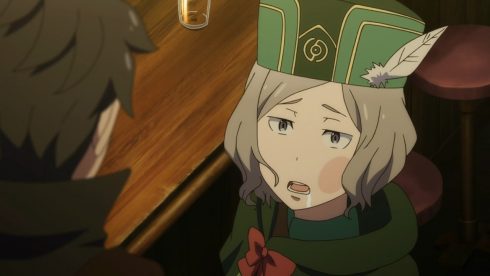 It’s just kind of sad seeing so many try to reach out and not having it hit. Even Crusch tried to get him on the right track, but it didn’t fit. Tried to get him to look forward, think proactively about what he can do right now. Instead Subaru in his poor state just turned to the easy way out. It was always possible he’d get close to this point where he’d look at how hard everything is and just choose the option of the reset and give up on solving things in the present. Even Wilhelm gave up on him when Subaru gave up. He’d given up on solving things and instead would just look for the next best chance to die and try again.

I just don’t know what will happen. Subaru was right in a sense. If he’s not there then he can’t respond to a situation and he can’t use that knowledge to proactively change things in the next loop. And he’s right that things are dangerous and if he isn’t around it could end in tragedy. But he’s also wrong in how he’s looking at it and approaching it. He doesn’t get that people are trying to help him, support him, and give him good advice. Yes, they don’t know about his ability but it is still right. Nothing improved by him going there. Instead Subaru’s reckless decisions lead to Rem dying. She may have made the choice to go on ahead, but frankly if he’d gone along nothing would have changed. Rem would still have died and Subaru still would have likely been left be. It’s not even saying that Subaru shouldn’t ever take action, but that he should get healed and then he can be more useful than he is right now. But all Subaru can see is his own frustrations, weakness and anger and he runs off. 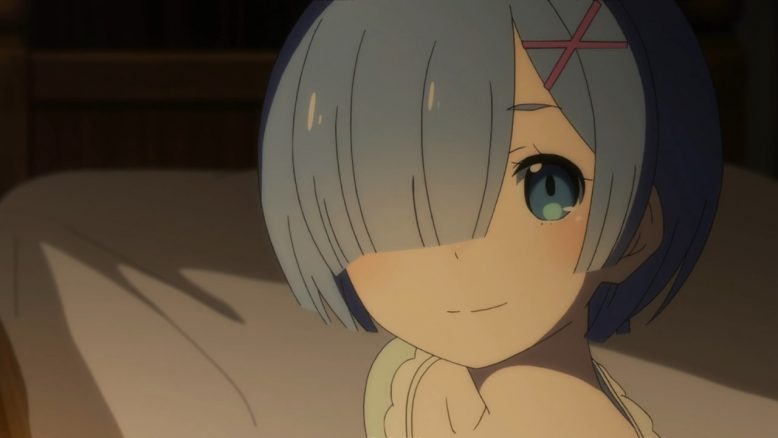 This was the Rem I’ve wanted to see for a bit. It’s just kind of sad how she is so darn earnest and Subaru is too wrapped up in himself right now to see that. Honestly before he went to the castle he had a better grip on things and how he was relying too much on Rem to cover for him. Rem was pretty darn saintly in this episode in handling Subaru. Letting him do what he wanted in terms of his training and trying to openly support him when he was down. Not saying he wasn’t pathetic, fully admitting he was, but that she was still going to stand by him. Even with Subaru’s extreme focus on Emilia she still stood with him and tried to keep him on the right track.

In the end she still tried to protect him. Going by herself because she knew it was dangerous and didn’t want Subaru to die. Hoping that he would be willing to listen to her and wait and at least avoid the danger. Though I do feel like she planned on coming back alive, but was just recognizing the danger. I think she also could feel that Subaru’s mindset was too dangerous. That he was kind of just casually looking for death. I do respect Rem for going so far and trying so hard to help Subaru to the end. Even though he clearly was focused on Emilia she didn’t let that get in the way of doing what she had to. Just terrible that it ended in her death like that. 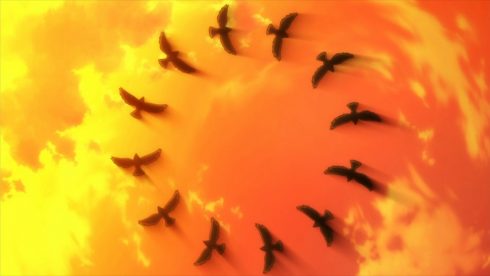 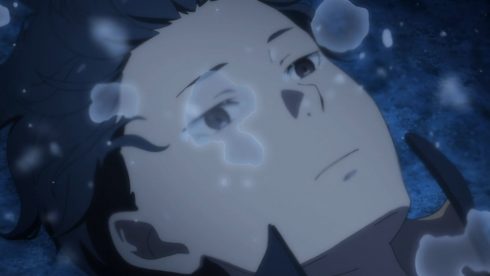 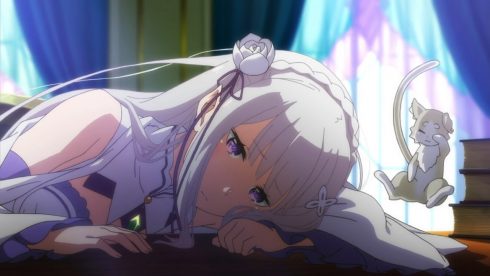 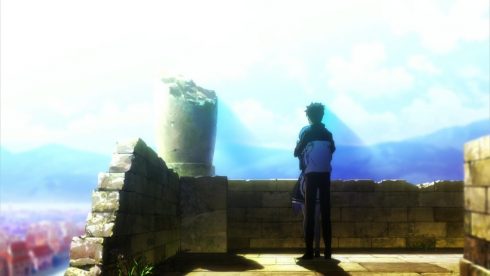 An interesting change with the OP this time. A lot more focus on Rem and recognizing her importance to things. But of course the focus on Emilia as well. Both of them are turning into core people in Subaru’s life and I’m curious to see how things will turn out for the rest of the season. Some dark scenes, but also some nice moments like Rem and Subaru embracing. The song itself was alright. It wasn’t very impactful, but the more times I listen to it the more I like it. 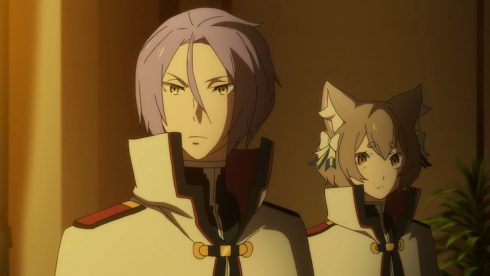 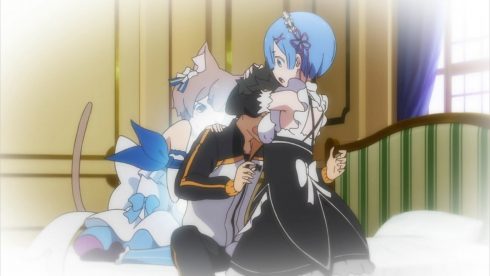 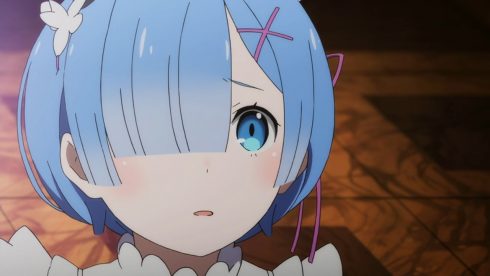 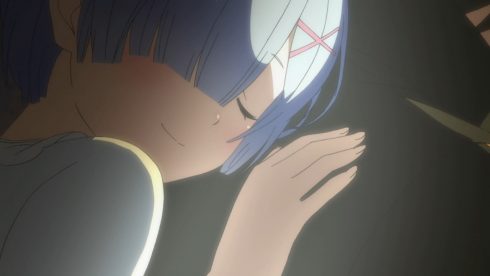 I just hope that something soon will get Subaru on the right track. I’m not sure if the utter pain of seeing Rem dead will push him in the right direction or just even further onto the wrong track. Unlike previous arcs it seems less of a problem solving situation than for Subaru to just get his head in the game. If he had avoided that stupid duel I wonder if he could have avoided a lot of this mess. Using that magic again probably did additional damage to his gate and made the recovery take all the longer to complete. I do wonder as well how far back Subaru will go if he dies here. Before or after the fight with Emilia or maybe even right at that point? I don’t know. Some tough times ahead here. Next week will be an interesting one to see.