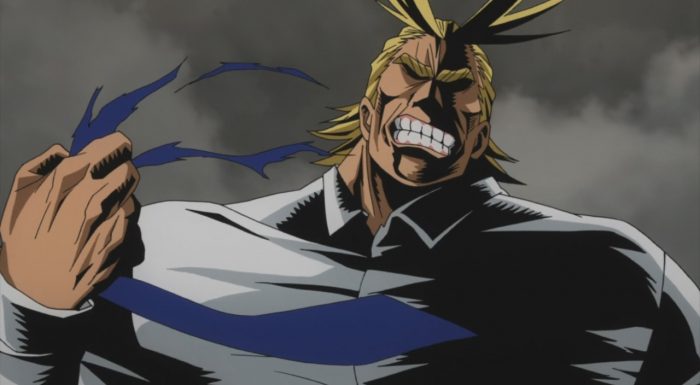 All Might really is just that darn awesome. There’s just no other way to put it than that. This was another really great episode for Boku no Hero Academia. It really was something watching the showdown with Nomu and the rest of the Villain Alliance. The grunts didn’t last a second, but the main three did prove a very tricky threat to deal with. Of course at his prime All Might wouldn’t have had any problem dealing with these guys. It is evidence of his weakened state that he was pushed as hard as he was and had to fight like that. Throwing 300 punches in the span of half a minute is pretty insane, but the fact that he needed 300 punches to match out to 5 punches at his prime just says it all. He’s an incredible character both in terms of his abilities but also his mentality. 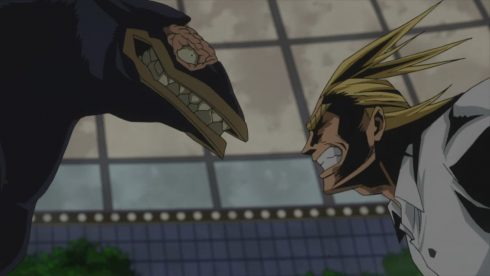 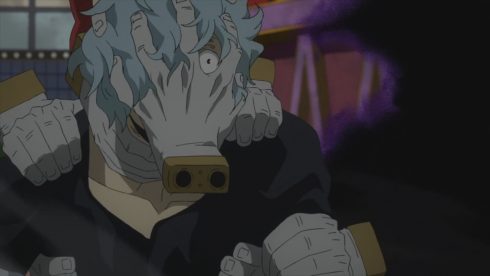 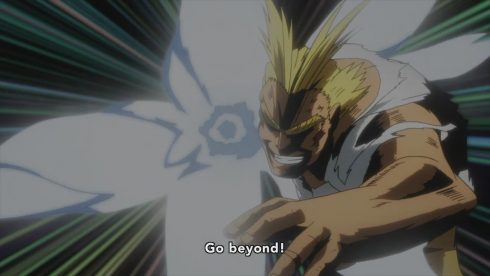 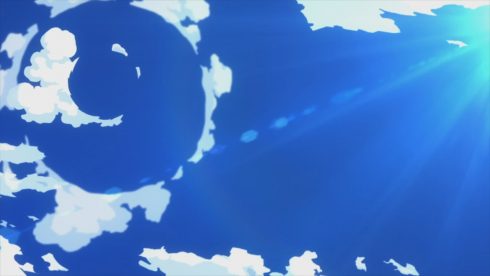 It’s not just his power that makes All Might an incredible person, but his heart. This is someone who truly believes in being the pillar of society and the symbol of peace. It isn’t an empty symbol in the slightest. To give people a shining example to look up to. He is someone who will stand for what is right even as he is hacking up blood. He showed that time after time in this episode. Certainly an option was to cooperate and work with everyone against this threat. But at the same time it was just better for him to do it. All Might’s plan was effective and worked well. By bringing the fight to that extreme it made it impossible for the villains to properly support Nomu. It was left to the monster to fight by itself and it wasn’t a match in the end.

As the symbol of peace and someone who has inherited One for All, All Might had to be the one to end this. Their support was most definitely needed before, but ending it in spectacular fashion like that is what a symbol of peace should do. Be this imposing pillar that the villains just can’t go up against. And he pulled that off. Just blasting Nomu into orbit or at the very least out of the city limits. Wherever his body ends up….he’s not going to be jumping back into the fight any time soon. 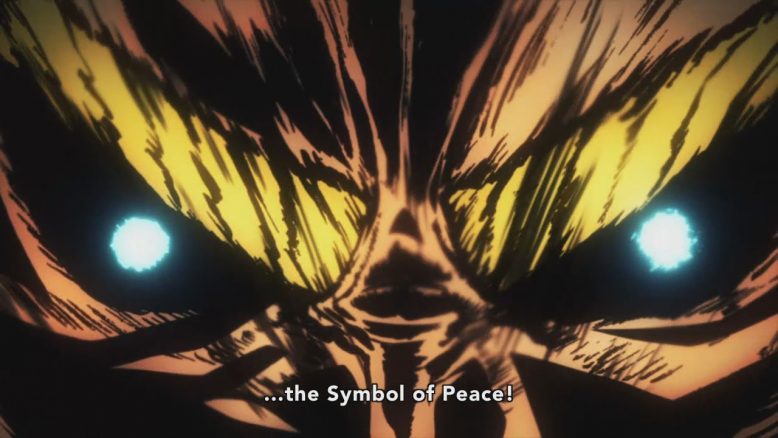 Peace is about to mess you up!

All Might really does mesh power with some good brain power. He wasn’t just punching randomly a few hundred times and hoping to win. He knew the power was shock absorption and that gave him a chance. All he had to do was drive in enough damage that Nomu couldn’t keep up. Even with shock absorption and regeneration, there was a limit. If All Might could drive in enough damage with enough speed he could continue weakening Nomu to the point that he could blast him right out of there. The key was just giving all he had. In that sense All Might really is a spectacular kind of comic book superhero. Heck this guy should get his own Comic series XD. In his victory All Might gave a great lesson to the kids as well. “This is the wall you must climb over.” It shows the difference between the students. The ones that seek to be at the top or recognize it were both in awe and shaken a bit. While the ones who don’t have those ambitions were just amazed.

Of course he’s not all powerful anymore and this episode showed that. Despite showing up with a lot of rage he did get put into a very bad position. Stuck in an awkward position and threatening to be ripped in half by the warp gate. In the end it wasn’t just a plan about Nomu stopping All Might. It was a combination effort. Nomu might not have been able to kill All Might, but he could restrain him. All Might being weakened by his injuries and passing on One for All just left him in a position where he could have lost. 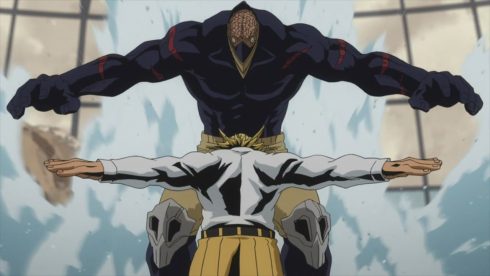 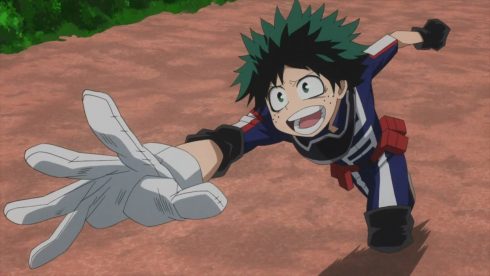 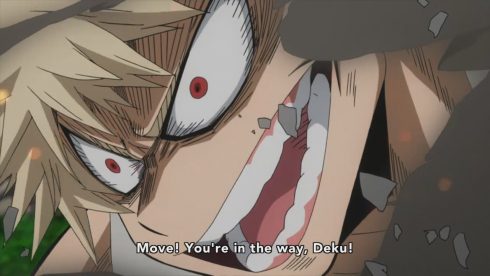 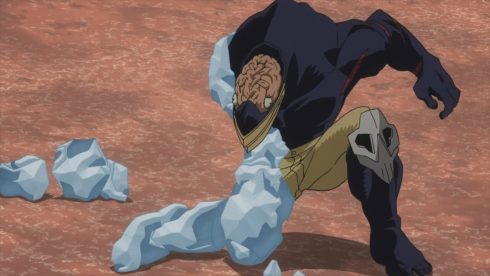 The best thing about that bad situation though was that it allowed the group to step up and shine. Bakugo, Todoroki, and even Kirishima got to shine quite well. Deku didn’t really get much of a chance to do more than rush in there, but I suppose that’s for the best. He shouldn’t take a lot of injuries unnecessarily. It was just nice though to see these guys step up and be helpful to All Might. It was thanks to them that he got out of that trap and was able to turn everything around. He’s not all powerful any longer and thus things like that will happen.

It is in situations like this where Bakugo is useful. You can’t just call it a bluff that he’d do something extreme if that guy made a move. Plus he does actually have a better head on his shoulders than one would presume. Putting enough thought into what was said to him after that first attack and that it was likely that he could do actual damage. If only his personality wasn’t a tire fire he’d probably be a pretty likable person. Hopefully he can figure that out going forward. 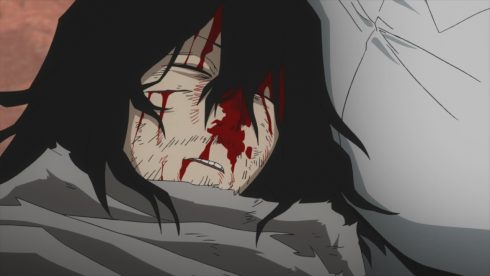 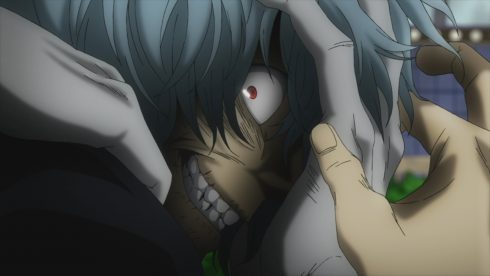 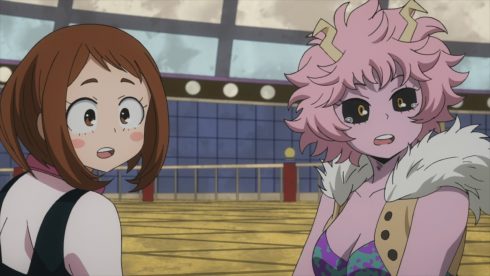 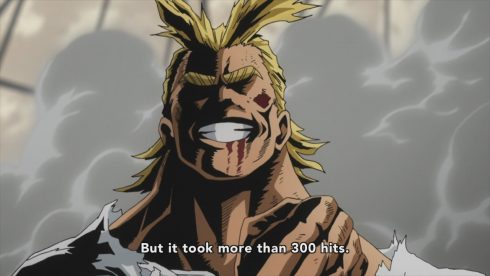 The situation is a bit tense at the end of this one, but it isn’t a horrible situation. They have taken Nomu out of the equation and backup should get there pretty soon with Iida still running for it. Still, this group of enemies is a scary bunch. Shigaraki Tomura looks like one utterly insane bugger. I suppose the fair question is….what’s up with those hands? Seemed to really go unhinged when one was knocked off him. I sure hope that isn’t actually his father’s hand on his face….that’s just disturbing. Hell, I’m just hoping those aren’t all real hands. I did approve of All Might basically calling him out on his speech. It’s just about this guy having his fun. They just want to be able to do what they want, no matter what it is or how violent. Seems like they resent All Might for restraining the violence of society and getting in the way of them just doing whatever horrible things that come to mind.

After all we are dealing with people that could put forward a monster like Nomu. Something with multiple quirks along with extreme inherent strength. I’m still not sure that thing is actually human in all honesty. I kind of hope it is just a manufactured monster since I’d just feel sorry for the person for being turned into a mindless creature like that. This was a really good episode and I can’t wait to see how the show leaves off next week. Just a shame this is one-cour, but what can you do? It has definitely been a strong show and this episode was a good one.