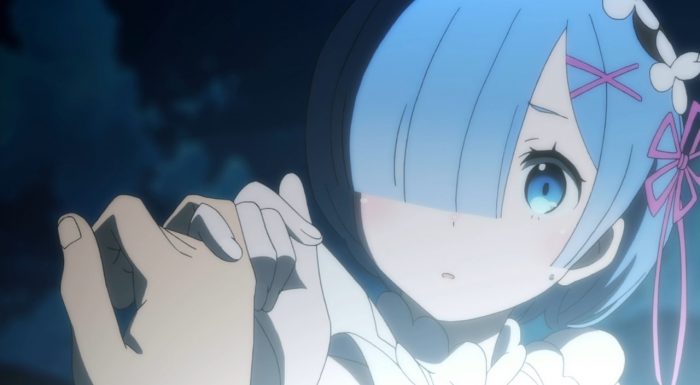 How does this show keep doing this? Yet another week that I’m basically glued to every scene and sitting in shock by the end of it. They can’t end an episode like that? Where’s the next episode? You can’t be telling me I have to wait a week to find out what happens next right? Once again Re:Zero just nails it. At the end of the episode I’m just sitting in shock there. There is a very strong effort being made to avoid any spoilers or looking for them just to find out what’ll happen. It’s almost hard to figure out where to start talking about this. The ending really is such a massive part of it. Is Subaru dead? The thing with this show is that he really could be.

I think part of the greatness of this setup is how the show is using it. Subaru could die. He actually could have died from those injuries. Of course he won’t stay dead which is why it can happen. What makes it work though is that there is still consequence for death. Death has a lot of value, but its emotional value. The bonds that Subaru has made this time are so precious that they are like a character. The life of those bonds is what might be at stake at the end of this episode. Can you imagine the agony for Subaru if he wakes up and has to start over again? Even if he knows more about what is going on…it will destroy him to have to try and build up those bonds again and have it be natural. He naturally got closer to Emilia and Rem and if he dies…that is what could be lost. You want to see Subaru succeed for the sake of those bonds. 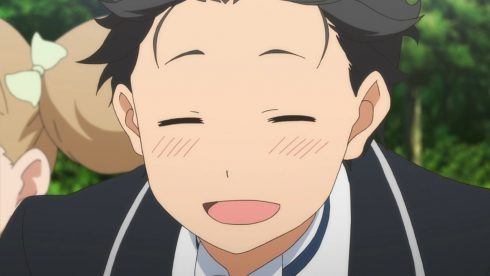 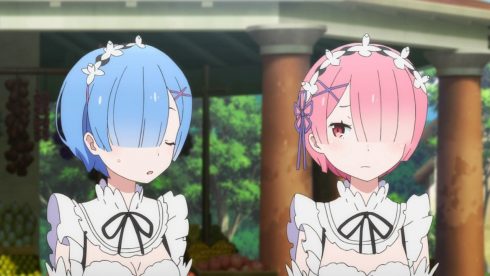 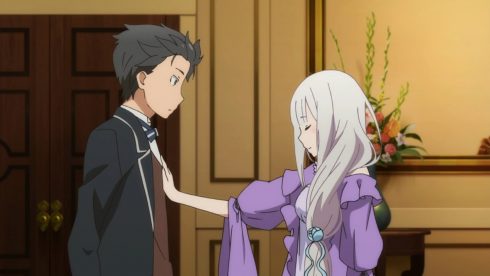 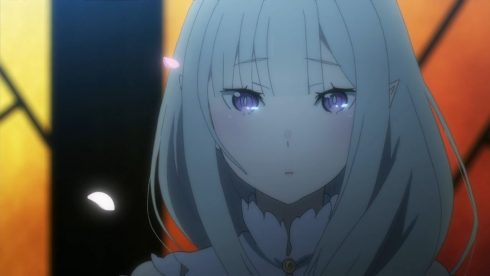 I think the only tough thing is that in order to develop other characters more fully, the show has to take the approach of other light novels and kind of limit Emilia’s involvement in events. The last arc was about saving Emilia, but this time Subaru has to tackle other things. I’m glad though she still got a nice scene beforehand.

Sure it would have been nice to have her along for help, but it is a crisis at night. That is something the story has and probably will continue to use. At night her effectiveness is more limited. Plus, it wouldn’t create any more trust if he tried to pressure Emilia into going. Emilia’s safety is very important and dragging her into danger would make Subaru look more suspicious by the minute. Still, I liked that she had a few words for Subaru and did express her concerns. But rather than harass him, just wish him well and safety on coming back. 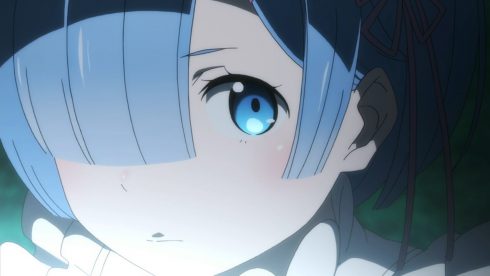 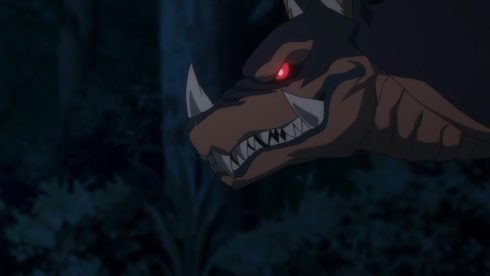 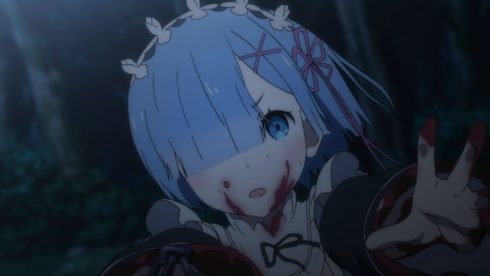 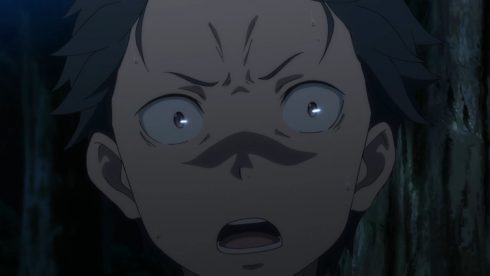 But, really this was all about Subaru and Rem. Though I do think Ram had some nice moments. She responded quickly to the crisis and figured things out in a hurry. She had enough faith in her sister to handle things and I think she had enough trust in Subaru to let him follow his gut on this. The best stuff though was left to Rem this week. She got to be badass and not in a horrible way. Having her hunt down Subaru was horror film moments, while this gave her more badass hero scenes. Kind of weird being able to see her actions from both the incredibly terrifying to almost heroic.

I say almost since Rem did go into berserk mode this time. Shows that she really isn’t human (shocker I know) and that she can lose her head in the heat of battle. Getting very brutal and intense in handling those mabeasts. Understandable though. Rem has clearly a bad relationship with Satella and anything related to her is pushing her ability to stay in control. Before it was pointed more towards Subaru, but this time she was just losing her head in venting her rage. It did nearly get her killed, but Subaru got reckless and charged in to save her. For that reason I hope he makes it….he’ll never have a better chance to earn Rem’s trust than this. Risking it all to save her life….yeah that leaves a mark. Even if Subaru has that scent about him, that shouldn’t change her ability to trust him. 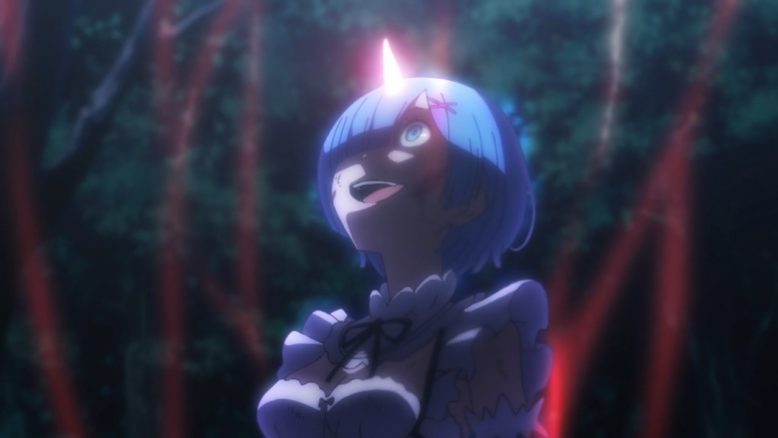 I do hope we’ll see them just chat up a storm. Though I worry since Subaru can’t explain everything about his situation. How far he can push his words and explain things will be up in the air. Though I would love to see him be able to chat with Rem in depth about her and figure out what makes her tick.

Subaru just had some great moments as well with his speeches. His rationale for going after the kids was effective and well supported by the music. The music deserves a lot of credit with this show. Swelling up with the scene and making his point all the more effective. He can’t turn his back on those kids. He’s spent enough time through these loops that he can’t just let them die. The same when he talked to Rem about going after the last kid. He truly wants to gain Rem’s trust not only so he doesn’t get killed by her. And despite all that has happened, he also has faith in Rem. 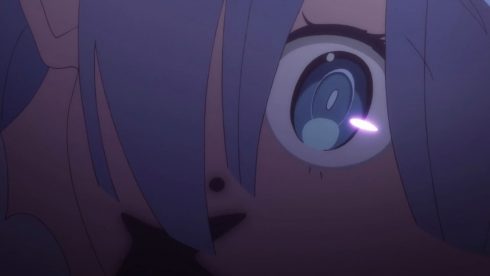 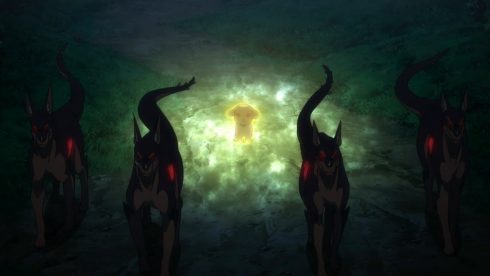 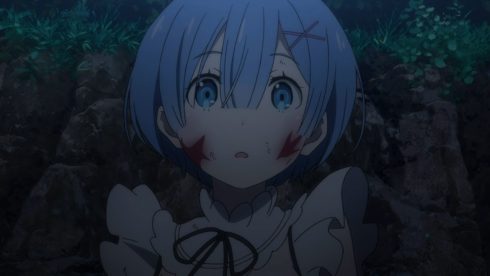 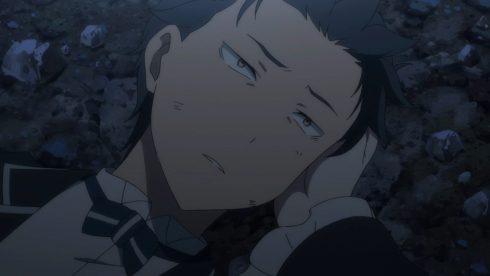 Though I’m left uncertain about what the motivations for this incident was. The barrier being down would explain how the kids were lured into the woods in the first place. But what was the point of all this? Subaru (and Rem in a previous loop) were bitten, but so were all the kids. What was the point in taking them into the woods and leaving them in that state? Why attack Subaru at all? What is the end game goal of all this? And why attack the kids earlier than previous loops? Was biting a member of the staff at the mansion a sign to take the next step and attack the villagers? I know Rem said the mabeasts were created by the Witch and were enemies of humanity…but what is the point of this attack? No idea.

In the end the danger was real enough though. Subaru fought well and I give him props for killing one of them. Though it is tragic that he was simply met with dozens of those things after his victory. He is improving and learning skills, but Subaru is still weak. Rem had to do most of the fighting and was pretty badass. Though I’m not sure she’d consider that a proper compliment XD. Heck of a battle maid. 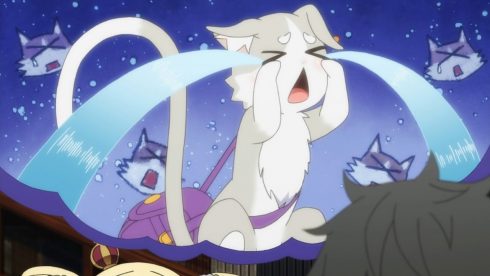 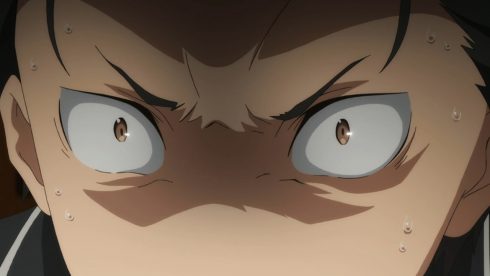 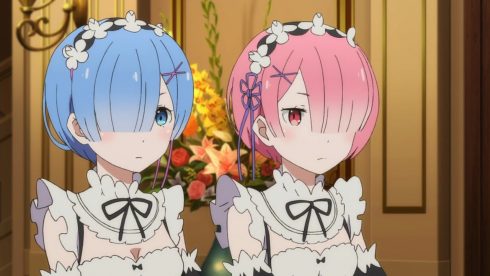 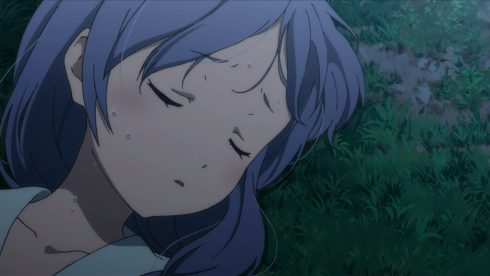 Just a really strong episode. Even liked how Subaru was prepared to use Puck to guilt Beatrice into removing the curse on him XD. Though I think she would have done if he just kept pestering her anyways. But his logic was rock solid. Emilia would be at the very least depressed if Subaru died, that would make Puck upset, and that would make trouble for Beatrice if they knew she could have saved him and didn’t. In the end….just less work to help him out and take care of the darn curse.

Can we hurry up to next week already? I really want to know how this is going to turn out. Though the more time I spend thinking about it the more I think he just…needs to survive this. Such a strong episode and great strides made….it’d be too painful for all parties if Subaru had to start over again. Fingers crossed and will have to wait not all that patiently for next week.