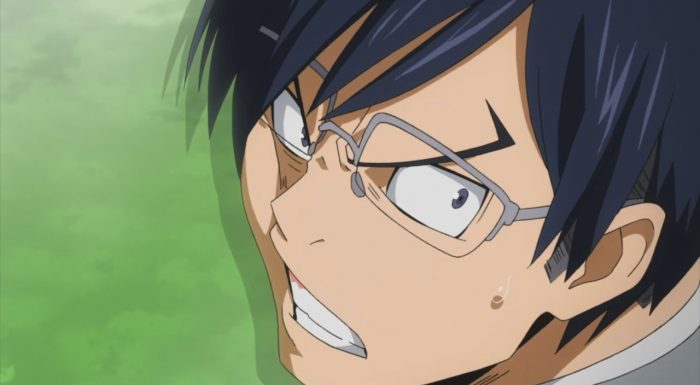 Well this was a solid lead into what looks to be a pretty major crisis for the show. Having a regular class basically turn into a real emergency. Instead of just taking care of some disaster rescue, they now have to focus on rescuing themselves from this situation. For most of these kids this will be the first time they’ve been face to face with actual villains. Even though Deku and Bakugo have faced one in the past that was just one guy and they did need a rescue. This is basically a small army invading the school. Things are going to get pretty crazy here. A lot of responsibility falling on the shoulders of Aizawa and Thirteen. They’ll have to protect the students as best they can. Unfortunately All Might isn’t there to back them up. Though after exhausting himself by helping people earlier….it is probably a good thing for him that he isn’t there.

This episode more than most so far really did have the feel of covering multiple manga chapters. The story between the class rep and the field trip were pretty distinct. Though there was the tie-in of the villain we saw being involved in both incidents. But this mostly was two stories being told here. Getting some more background and understanding of Iida this week which makes sense since he seems to be one of the more prominent side characters and one of the small group of friends that Deku has right now. Though he still thinks that Deku knew something about the test and was thus more aware than him…but really Deku was just going by his gut. Perhaps better than knowing the truth about the test…but I suppose that’s up to the individual to determine. 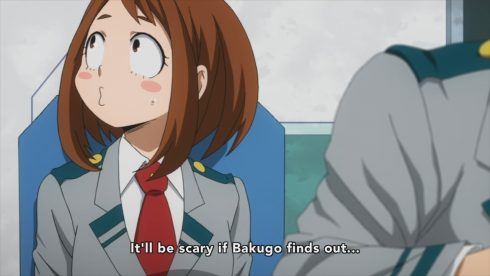 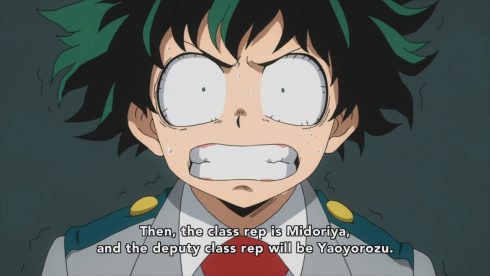 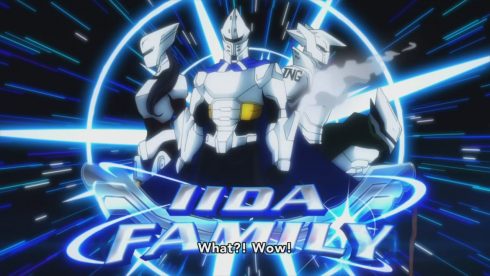 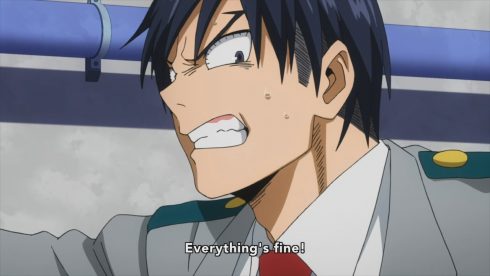 So Iida really does seem to be one of those family career types. His family are basically all heroes using that same kind of quirk. Looking up to his brother who is a pretty famous hero and wanting to live up to that. Iida is a pretty stiff person who tries to act responsibly at all times. That can lead to some troubles for him, but at the same time it does make him reliable in an emergency. He realized that the situation wasn’t one that was worth panicking over and took action. Relying on Ochaco’s power to get himself into a position where he could grab attention and calm everyone the heck down. I also respect that he did initially vote for Deku. He’s not the type to just vote for himself unless he thinks he is the absolute best choice.

It shows that despite having powers…these are still kids. Like any regular person they panic when a situation outside their expectation occurs. Although it is worrisome that the older students were flipping out as much as the younger ones. Despite all the training, when something they don’t see coming happens…there is trouble. But, I suppose that is life. It’s one thing to learn about skills and it’s another to have to face the unknown. Makes you wonder I suppose if society can actually mass produce heroes on the scale it is there and succeed. Might be more trouble on the horizon than one might think. 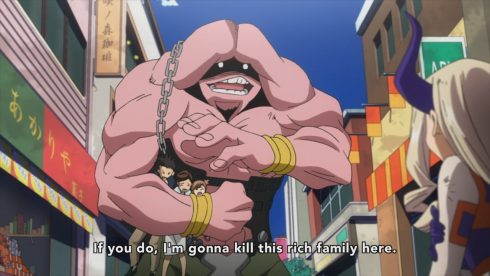 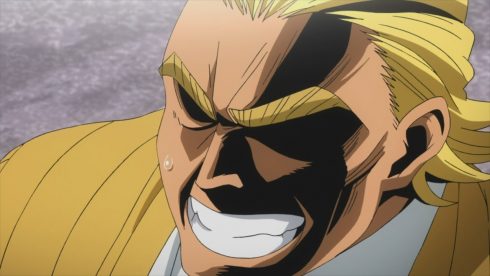 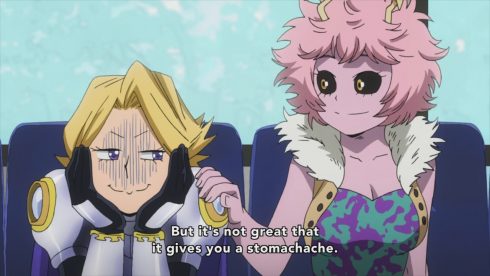 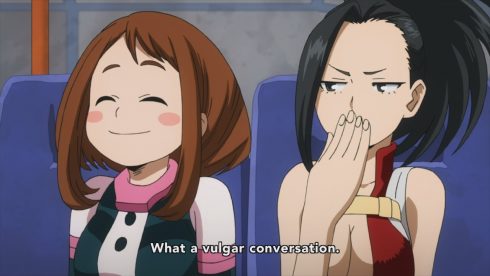 It is a good break that Bakugo didn’t seem to think much about Deku’s words. It is a case where being sincere is actually a terrible weakness. Deku has to learn to accept that some people will act like he tricked them all those years. Honestly…just lie. Say your powers suddenly came to you. It’ll be weird, but less dangerous. All Might hit all the points I really wanted to cover. If people found out that One for All was a quirk that could be passed around….people would actively hunt Deku down and harass him, doing anything to get that quirk for themselves. That’s not a good situation

The future though is a dangerous one ahead. All Might commented that he’s getting slower. He’s got those injuries, his inability to use his power for more than a certain amount of time, villains coming after him, and having passed on One for All. Having started that transition it’s only a matter of time. I suppose it’s a long game for All Might. He has to continue doing a good enough job that people don’t lose faith in him while constantly getting weaker. But he can’t actually retire until Deku becomes a hero of the level that can openly be passed the torch of top hero. 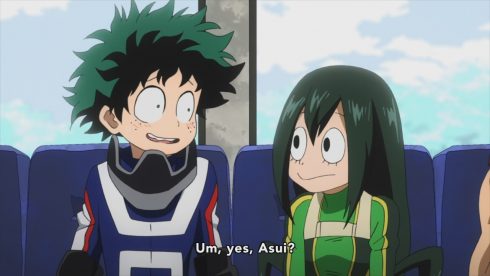 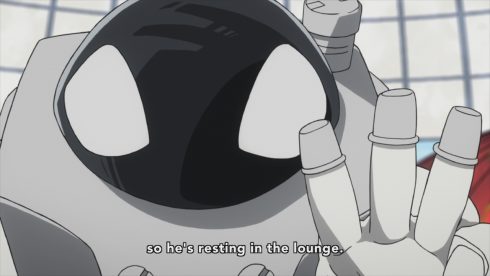 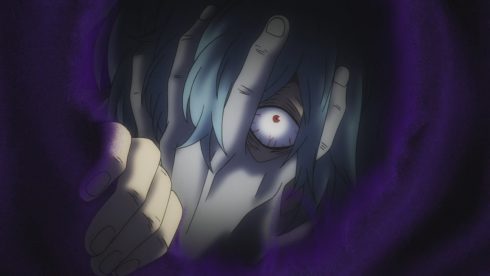 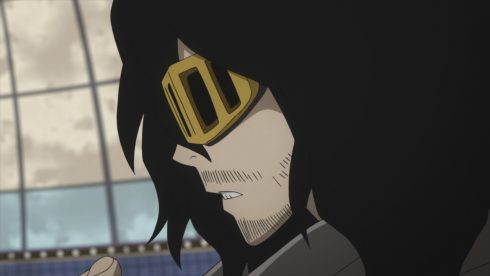 Is a bit of a shame the class was interrupted. That was actually a pretty good speech in terms of using quirks from Thirteen. He has by far one of the most terrifying and dangerous quirks we’ve seen so far. He can make a black hole! But, he’s known more for being a rescue hero. Using an unbelievably dangerous skill to actually save lives and tackle emergencies. That’s pretty impressive. He makes a good point that there are a lot of quirks that are very dangerous, but if used properly and with care can be great tools to help save people. But I suppose an emergency is a bit more exciting XD.

Honorable mention to Tsuyu. Seems like a nice character, though I suspect is hardly going to push Ochaco as the main female character in the show. Probably will stand out along with a few of the other students who got more lines than usual on the bus. Will see how all these students deal with this emergency situation. This episode was a good one for setting up the current crisis. This will probably be the biggest issue the students face before the show ends. Hopefully they handle it well.