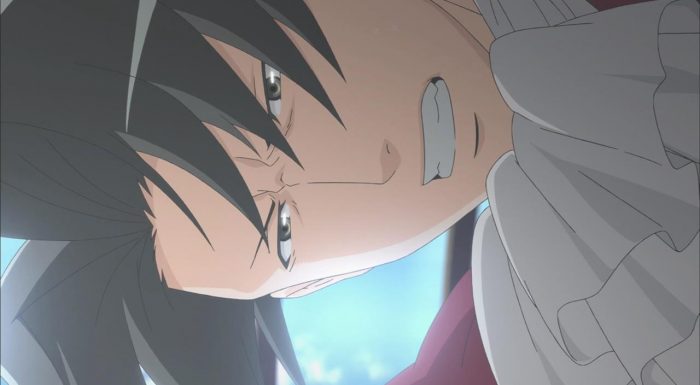 I really, really just stood there, in shock, as the Ace Attorney anime ruined another solid case, another big courtroom reveal, and injected its own brand of weird melodrama, terrible pacing and downright stupid logic into it all. I could go on and on about how this episode ruined the nuance of the original story, how it cut our major chunks of the general case, how it outright removed plot twists and crowning moments. I could write one of the longest reviews I’ve ever done and point out how Mitsurugi/Miles Edgeworth and Naruhodo/Pheonix were completely trampled on, \not only as characters, but as just elements in a story.

But honestly? I don’t think I can or even want to. There’s just a hollowing kind of disappointment that I feel right now. The Ace Attorney adaption just isn’t even trying to do a decent job let alone anything “good”, and its wasting the time of any person who bothers to give it a chance. Its not something for the diehard fan, because the diehard fan knows full well how terrible and inaccurate this adaption really is. And the subpar quality of the production, the miscast voice acting, the terrible pacing and frankly pathetic story, all of that has had casual non-game fans exit quite a while back.

And as much as it pains me to have to drop a series midway through (I try to do that as little as possible), and as much as I want to stay and see this series through till the end, I just can’t condone giving this series anymore attention or visibility. Simply put, its a bad adaption, its a waste of time, and its something that just makes me want to run to the top of the nearest hill and scream my lungs out.

Seven episodes is waaay more time than I think this anime series ever deserved, but I stayed on because of my deep love and respect for the source material. After seven episodes,Its just all too much, too much for me to take. If you’re one of those people that actually find this sort of show captivating and interesting, then I implore you to go ahead and give the actual visual novels a chance. They’re available on the iPad, they’re available on the DS and 3DS and they’re much better than anything this anime could ever hope to show (at this point).

Yes, its gotten so bad, and this finish (of the latest case) was so rushed and sloppy, that its killed any interest I had in this series. Whether its covering it or just comparing it to the source material. I really am just done with it all.

The sad part is, I’m not sure who’s to blame here. I mean, we’ve got the frigging director of Uchuu Kyoudai (Space Brothers), Ayumu Watanabe and the frigging writer of Izauma eleven’s anime adaption Atsuhiro Tomioka helming this project. These guys are known for doing quality work, so its utterly bizzare how this show is turning out to be as bad as it is.

I wonder if its Capcom and the production committee that are messing with this project. I wonder if the talent helming this project is actually being forced to include stupid things like those gusts of wind that just randomly pop up and cause people to fall to the floor for no good reason. I’m honestly at a loss for why this show is as bad as it is, or why it never really had a chance to begin with.

I’m at a loss for why the Ace Attorney anime is trying to adapt the events of TWO GAMES in a 2 cour series, where even one game could easily take two and half cours to adapt, if done right. Far from being done right, or even decently though, this adaption is utterly and completely just garbage. Its lacking any emotion, tension or excitement whatsoever.

So yes, I’m done. I’m done covering Ace Attorney the anime series on a weekly basis. I’ll maybe throw up a full series review when this series wraps up, and check in on it from time to time, but committing to write and regularly cover this drivel is totally beyond me.

In the end, I’d urge everyone to just forget this anime series ever existed and just play the games. You’ll have a much better experience with those, whether you liked this anime series, or lost interest relatively early. I guess Ace Attorney is just another horrible video game anime adaption, joining the ranks of the countless others that we already had.