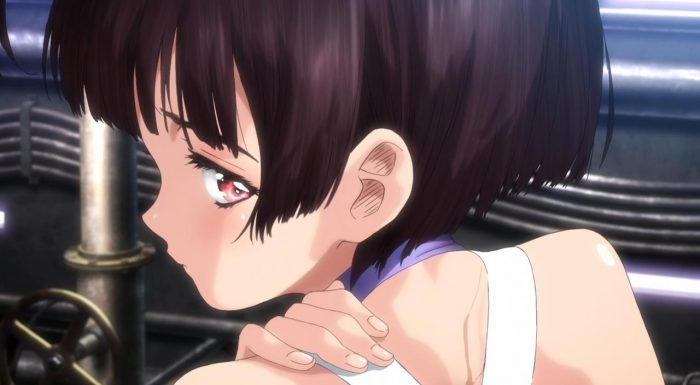 You can definitely say this about Kotetsujo no Kabaneri, while it may rely on the tried and true, it isn’t afraid to break convention in order to keep things interesting. After the first month of airtime, the show is finally starting to distinguish itself and its world, and preventing itself from being just another “zombie” show. The Kabane are definitely emerging as something a lot more interesting and distinct, with their own sets of rules and features that make the world of this show infinitely more dangerous and therefore a lot more interesting. 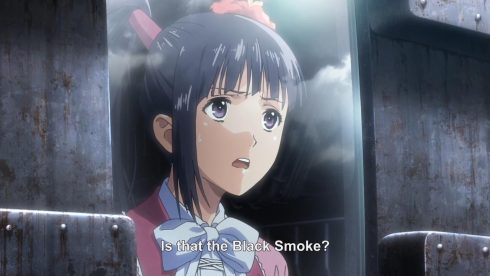 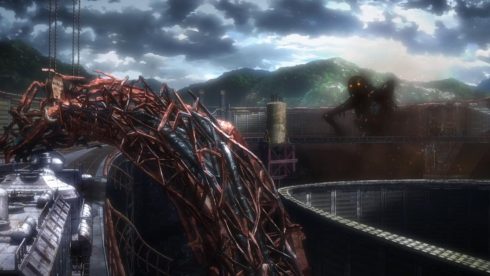 The big reveal this week, amidst some growing character drama with Mumei, was that the Kabaneri can actually amalgamate into some kind of big giant like creature. It seems like Studio WIT is not thinking small with this series, and is even looping in the idea of Giants (Kyoujin) from one of their notable earlier works. The reveal of the big “smoke/shadow” Kabane mass, was a huge and interesting change, if only because it just adds to the threats and danger that our cast of heroes now face.

Ikoma’s seemingly easy and foolproof plan is kinda shot, if only because he and everyone else had no idea what they were walking into. In zombie shows, its conventional wisdom to not mess with the unknown, and its that very same mistake that costs Ikoma and perhaps the whole Kotetsujo dearly. It is nice, that despite all the advancements, and increase in fighting ability that the group now has, they’re still only one misstep away from complete and utter annihilation. That keeps things nice and tense, and also gives a lot of credence to Ikoma’s whole “not need to charge head on” policy. 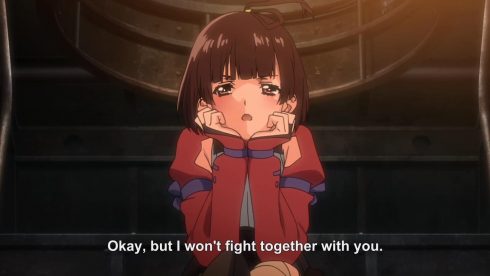 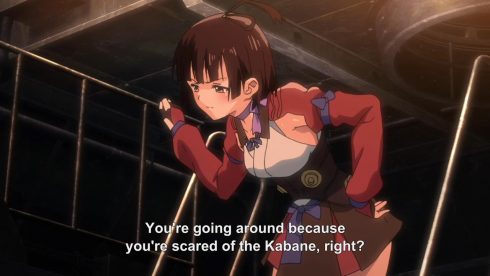 Of course, if there were one party that were completely and utterly responsible for the dire straits that everyone finds themselves in, its Mumei. I mentioned last week that Mumei’s whole facade and sense of belonging is not only very interesting, but that it will also play a huge part in the overall story. That’s not only confirmed this week, but we get a sense that Mumei’s whole part of the story is going to play into the larger story of the entire series. There’s an interesting amount of intrigue in what her whole story really is.

She’s definitely a Kabaneri and powerful, but it seems like its her emotional weakness and yearn for being wanted, that may be her achilles heel. Its a meeting with someone from her past, Enoku, that ends up sending her down a spiral of recklessness and reclusive-ness. Enoku turns out to be a cast aside “ear” or advisor to Mumei’s brother, who at this point is more or less the Shogun. 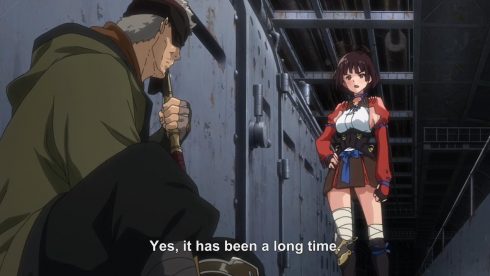 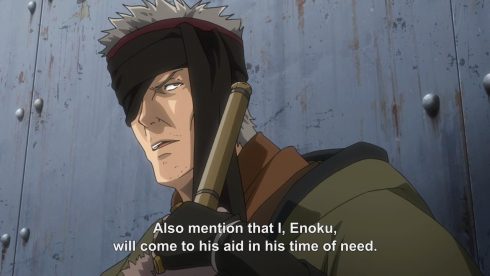 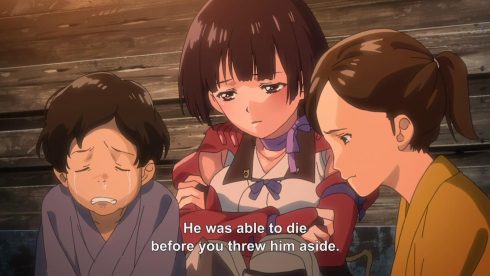 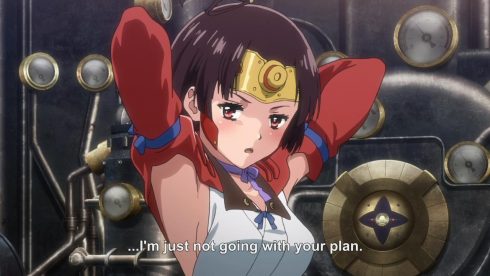 Its from this exchange, that we find out a bunch of interesting things. First, the Shogun seems to be a pretty ruthless character, and one that seems to be using Mumei more so than acting like her family. It paints a pretty japanese take on how loyalty and royalty worked, particular in the era where Shoguns were still a big deal. The little murmurings of arming weapons to kill other humans, definitely eludes to a much grander issue in the current social and political structure alongside everything else.

It is really clever in a way, to combine Fuedal Era japan with A steampunk world where Zombies reign supreme and the human race is on its last legs. Other shows may have done it previously (Samurai Deeper Kyo kind of comes to mind), but I think Kotetsujo no Kabaneri’s unique take of using the Fuedal era Japanese society as a backdrop to add color to the world, is a pretty smart move. 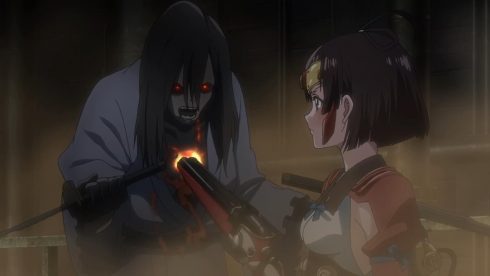 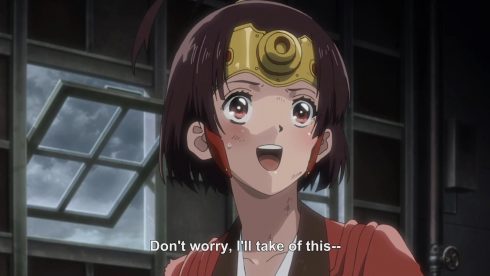 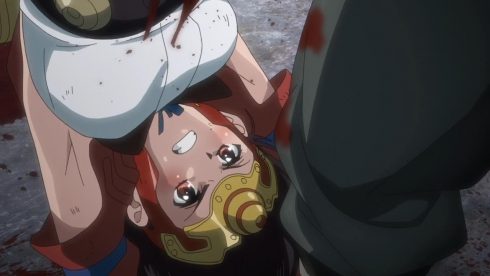 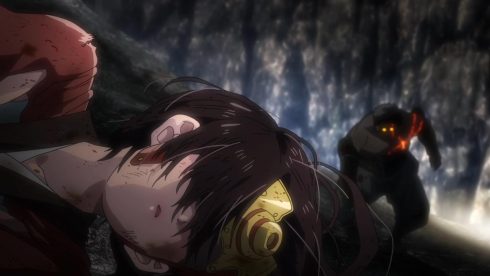 Of course, while all of that is interesting and good, the focus this week, is definitely Mumei herself. While she definitely took a bit of a backseat last week, this week’s events are almost clearly centered on her personal demons and just how vital she really is to everyone’s survival. With Mumei acting fearful and questioning her self worth after her little meeting with Enoku, it makes sense that she acts rather brazen and recklessly tries to take on the Kabaneri to avoid the issues that plague her.

I won’t say it isn’t frustrating, especially because you can clearly see that if Mumei were to communicate her pain with say Ayane or Ikoma, then she’d get the reassurance and the “place” that she clearly desires. The fear of being abandoned, of only being useful because you can kill, is something that the show develops well enough that the frustration is for the character, rather than at her. Mumei’s actions make sense, and that’s why the whole situation spiraling out of control, because of her, is a lot more bearable. 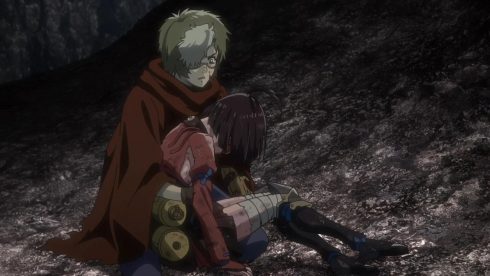 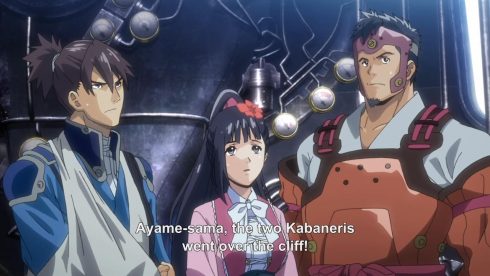 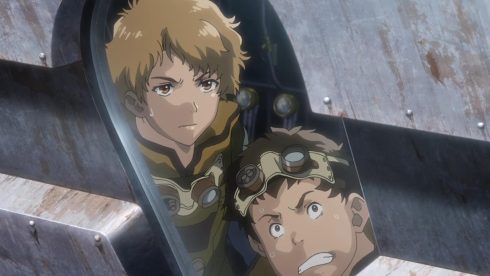 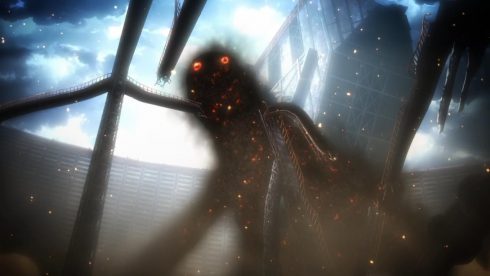 By the end of the episode, I really was hoping for Ikoma to go and save her, both from the Kabane, but even more so from herself. You can also kind of see where this is going, because at some point, after the group makes it through this latest trial, Mumei will come out believing in herself and her friends as family. Of course, the real question, on top of all of that, is how much Mumei’s reckless behavior is going to cost everyone. What could’ve been a quick, sneaky escape, is now a full fledged battle with a giant Kabane mass, while the Train’s two Kabaneri are stuck in some rubble inside a tunnel.

Its all pretty entertaining stuff. There’s pieces of originality mixed with tried and true storylines and the character drama is built up pretty darn well. The show continues to walk that razer edge between being fun and entertaining, and a bit predictable. And as always, by the end of the episode, there really is a huge lingering doubt about whether the group will survive this latest encounter unscathed, or not. Personally, I can’t wait for next week to find out.