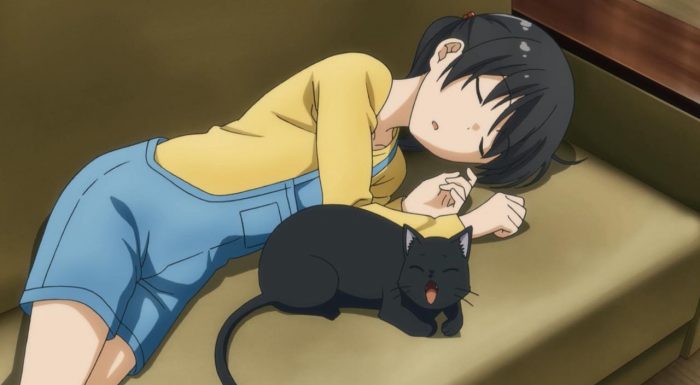 Wow. Talk about a classic depiction of the “slice of life” genre! In many ways this episode of Flying Witch reminded me a lot of some of the episodes of the now nearly ten year old (lovely) series “Sketchbook Full Colors”. The lead characters of both series have some general traits in common, but they are mostly quite different; however one similarity in general is how the cat(s) close to the main character would have their time in the spotlight as the main character of individual eps, which is exactly what we had here. The main focus of this episode was Makoto’s familiar Chito, and the episode itself centered around Chinatsu, Makoto (and Nao’s) following him around, essentially. A brilliantly done and rivetingly engaging episode where nothing much happens, really. XD 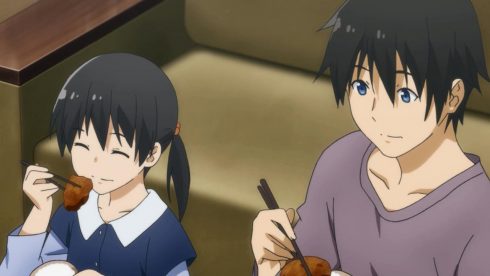 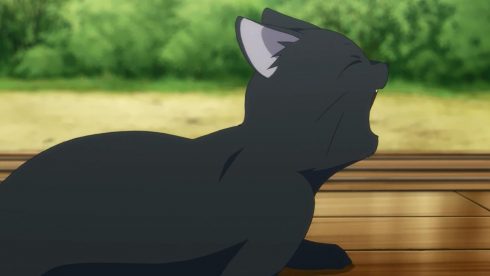 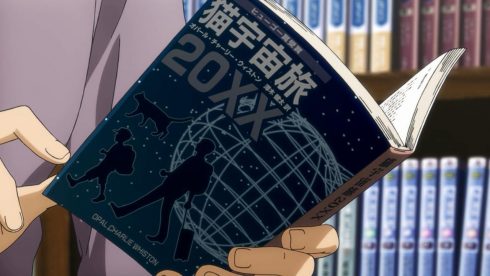 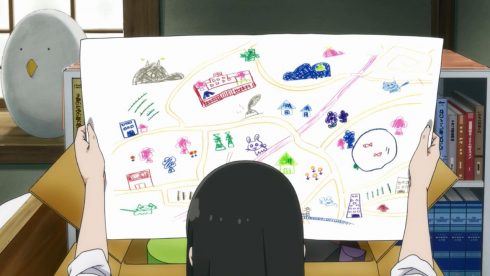 In the first half of the episode we have Chinatsu deciding to tail Chito, at the drop of a hat, too, as he meanders around the small town. We learn later that Chito periodically heads out to familiarize himself with the surroundings so that he can be of help to Makoto. (If you remember Makoto has a horrible sense of direction and gets lost very easily … Makoto even calls him her ” Chito GPS”.) Well, I say “of help”, but being a cat what that means practically is that Chito goes out and finds the things he finds interesting and then brings Makoto to said “important places” (like where there is a dog chained up that he can safely antagonize and tease to his heart’s content). 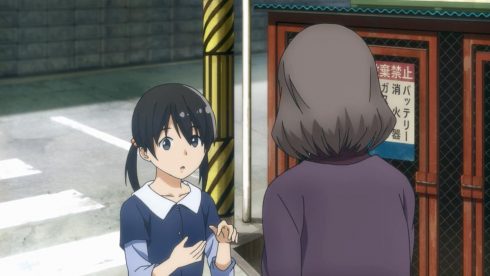 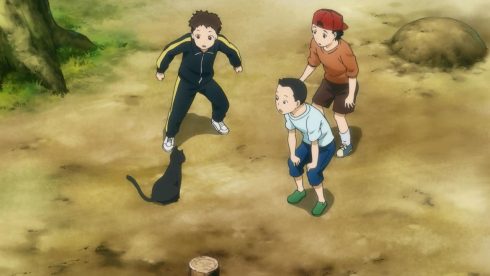 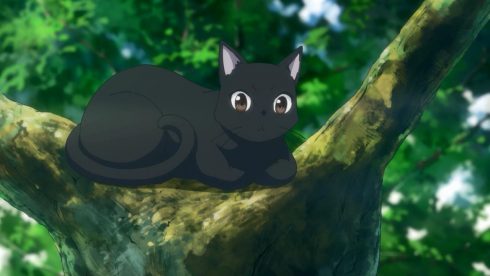 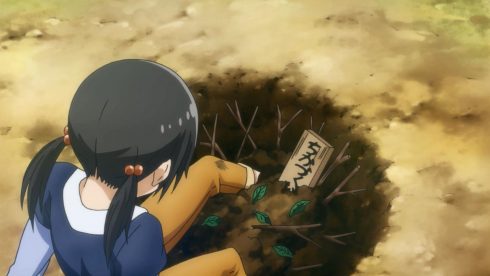 On a different level though J.C. Staff did an interesting thing here, and in my opinion pulled it off rather skillfully. The entire first half of the fifth episode is “anime filler” – it did not happen in the manga. However, much of the second half did take place in the manga, although it did so rather early on – in the 4th chapter. Up to now the studio has juggled the material of the early chapters around here and there out of the “chapter chronological sequence”, and has done so in such a way that the resultant narrative has felt rather … smooth and nearly flawless. The previous episodes, for example, take place in chapters later than the chapter this episode is based on. However if the next episode will contain the content I (and a few other active followers of the anime who adore the manga as much as I do) think it will, the arrangement J.C. Staff has pulled off thus far is actually rather … effective, and kinda impresses me. At least as of now. Without spoiling too much there are three “big” events that many manga readers have been looking forward to, and next episode might contain one of those three. 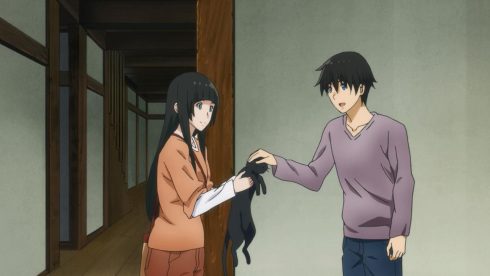 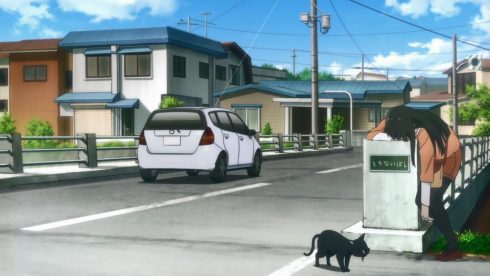 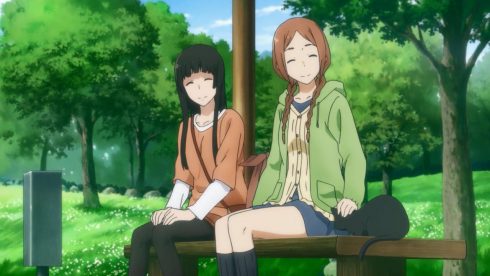 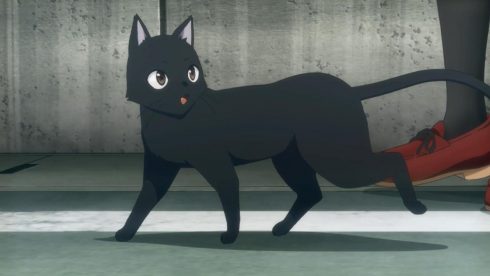 Well, after Chinatsu tries following Chito around town and winds up falling into a shallow pit trip for her efforts (fortunately she was not hurt; only surprised and dirtying her clothes) she quickly makes her way back to the house to an extremely trusting and easygoing mother. “Mom, I don’t know where I’m going, but it’ll probably be somewhere awesome!” is all the explanation that was required for her to head out! XD Makoto, however, is done with continuing her unpacking (anyone else notice the decreasing number of boxes in her room since the first episode?) and has uncovered some homemade pickles she jarred several months ago. (Anyone who has ever jarred pickles knows that they are often plenty pickled after a short time – several months results in serious pucker and tartness!) After sharing (inflicting?) her discovery on the family members at lunchtime she also heads out with Chito afterwards to familiarize herself with the town. 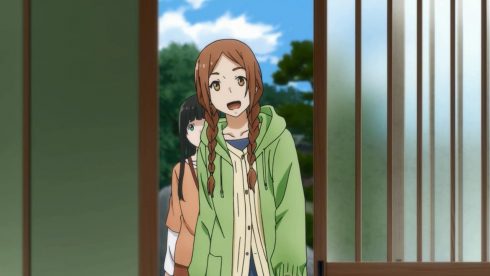 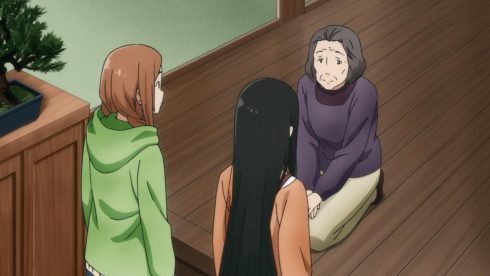 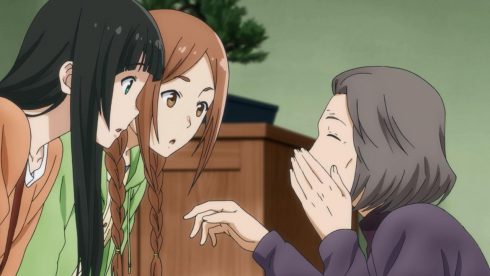 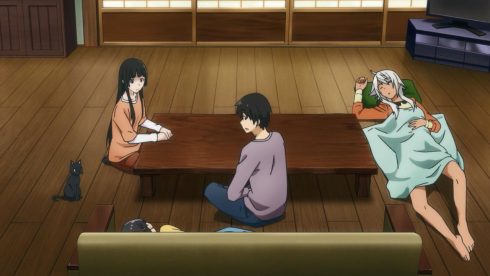 While Makoto and Chito are traipsing about (and fleeing from the aforementioned dog who breaks free of its chain and chases the two of them for some time) who should come upon them resting in a gazebo in a small park but Nao on her way to make a delivery for her family’s liquor store! After greeting everyone (and being unexpectedly informed that Chito thinks she is cute) Makoto and Chito decide to tag along on her delivery, and it turns out Nao is delivering to the house of an older lady who Chinatsu met on her earlier attempt to trail Chito and who immediately identifies Makoto as a witch (Nao is surprised at this too)! It turns out the endearing and gentle old lady had a friend when she was a younger girl who also had a black cat as a familiar and was a practising witch. The episode ends with Makoto returning home and finding both her older sister Akane (she is still around) and Chinatsu conked out – in fact Akane seemed to have been sleeping the entire episode, although she was awake during the meals.

While the star of the episode (a poster child for the slice-of-life genre if there ever was one!) was Chito, I thought the portrayal of the cat’s behavior was surprisingly realistic, in my opinion the unsung star was the soundtrack – thus far it really has been extremely effective in helping create the “comfy” and “homey” mood and/or atmosphere of the series, I think. Anyway, next week should be quite something if predictions prove true! Thanks again to Takaii from random c dot net for the screenshots! (Alas, this week I experienced nasty back spasms in an area of my back I injured really badly some years back and it kinda took the wind out of my sails.) See you all next episode! ^^