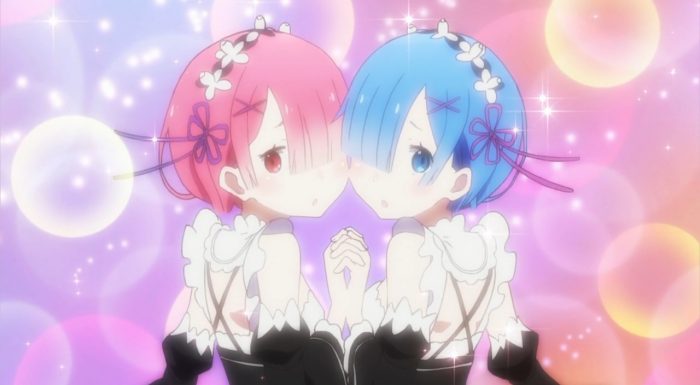 I did kind of expect something to happen near the end but dang, this time it’s a mystery. In a sense that’s actually tougher on Subaru than the death by Elsa last time. I mean how do you prepare for or predict what will happen when you were apparently killed in your sleep? That’s a definitely tricky problem for Subaru. When you step back it’s probably not as bad as being murdered painfully, but it’s so much harder to actually deal with.

After all this is a pretty stable and secure facility so the odds are….an inside job. Was killed so quietly even Subaru himself didn’t notice being killed. So the odds are good that someone we met in this episode was involved. Frankly if Subaru figures that out…he’s in a lot of trouble. Can you imagine the mental strain of having to doubt basically everyone there? Maybe he can call it safe with Emilia and Puck, hard to believe either of them have it in them to murder someone in their sleep. But…the rest? That’s a bit harder to judge. Regardless we also have to consider it from Subaru’s point of view, how can you trust anyone in that situation when it is your life on the line? 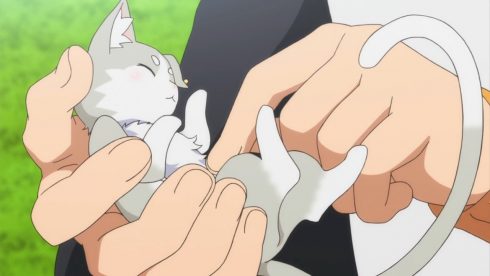 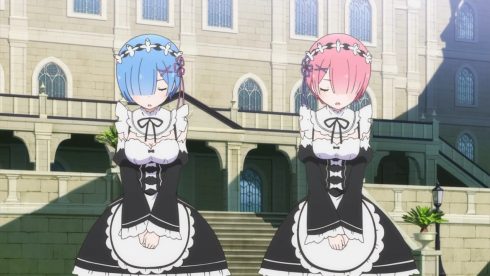 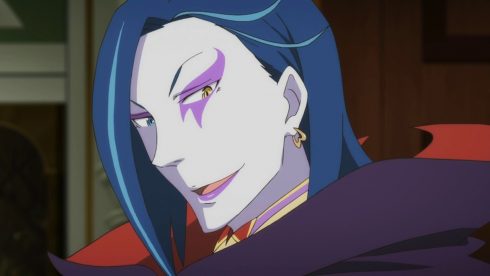 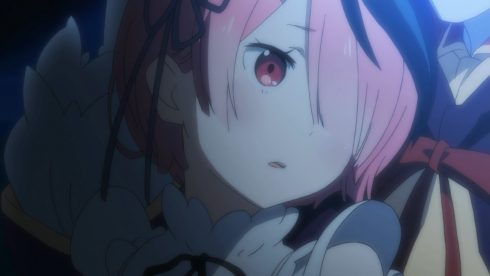 This was another good episode though. Not action packed, but more about building up connections and developing Subaru. He went through a pretty crazy time and this run is in a sense the practice one. He gets to interact with a lot of new characters and get to know what makes them tick. Make some mistakes, make some good moves and then go back to do it all again. Subaru does have some ideas I suppose to make this run easier. He could take Emilia’s suggestion of asking to be a permanent guest. That would give him more time to investigate and figure out who killed him and why. That doesn’t make it easy though. He has to be careful and right now he doesn’t know what exactly got him killed. Hard to prevent it until he finds out why someone is out to get him here.

The initial guess is that Ram (the pink-haired maid) and Roswaal are behind this. With it being under Roswaal’s orders that Ram killed Subaru in whatever manner he died. After all it seems like Rem is utterly better at everything involved in being a maid while Ram is only good at cleaning (but not to Rem’s level). On the other hand while Ram isn’t good at cooking….she is good at handling knives. Very possible she’s some kind of secret guard or even an assassin for Roswaal. Would be helpful to keep someone like that on the staff if necessary. 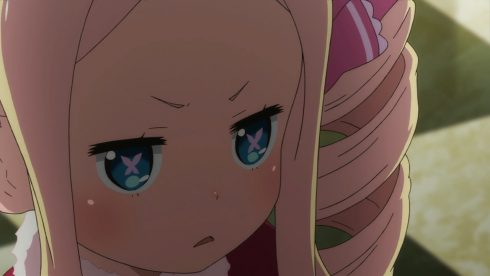 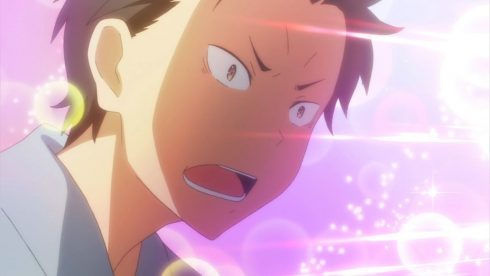 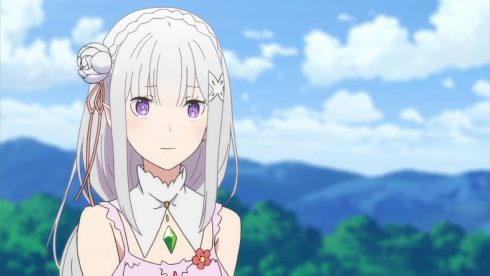 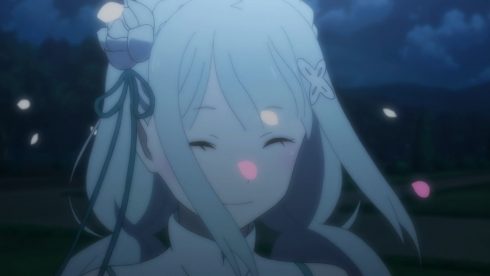 Odds are good that Subaru was killed because he’s suspected of being a spy. Even Subaru acknowledged how utterly suspicious he is. In the end it’s possible that in a cold manner Roswaal is being cautious. If Subaru is suspicious then kill him off. In the 5 days while the odds were low that he was a spy, they weren’t driven to zero. It is possible that Subaru could get through this situation by just eliminating the likelihood of him being a spy. Or being less conspicuous which he certainly has been. But again, Subaru doesn’t know about all this. He doesn’t have a clue that the head of the place considers him a spy or at least he didn’t really think about the fact that he is rather suspicious.

I’m not sure if this is entirely for Emilia’s sake or if there is more going on. She is a candidate to take over this Kingdom which is rather huge. That would explain why someone would go to extremes to have the insignia stolen. It would get in the way of her becoming ruler and put that advantage towards someone else. It might also explain why Reinhard reacted like he did. If that insignia reacted to Felt then…she’s a candidate. Maybe even a secret child of the former King. If there’s nothing to be said about people in power….they have affairs like anyone else. Just that they have the power to hide that. Though the fact that Felt was living on the streets doesn’t say good things about what would have happened to her mother in that scenario. At the very least I can buy Reinhard reacting like that if Felt is a candidate for the throne. 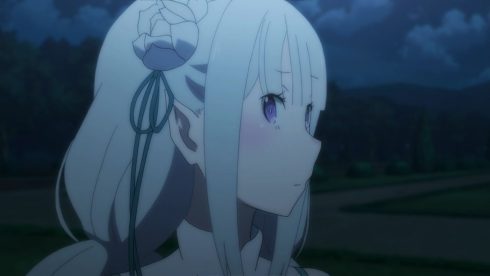 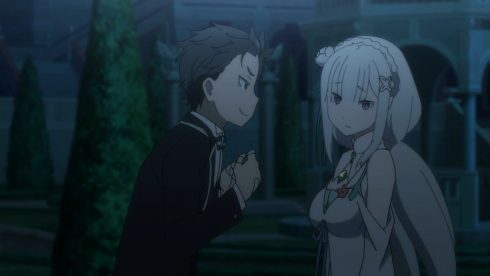 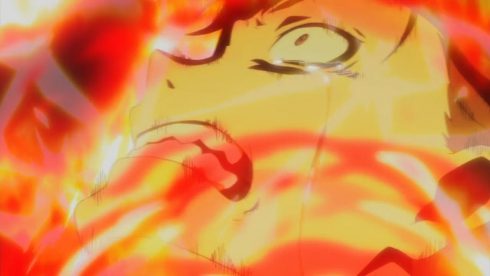 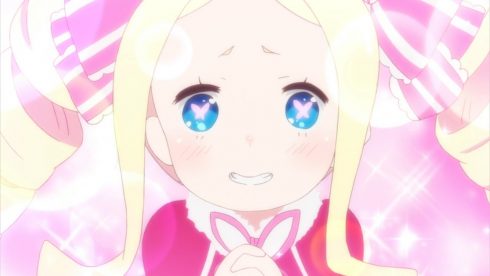 An option for Subaru’s survival though is Beatrice. That girl has doors to her own room that can’t easily be found (say by an assassin). However Subaru has an unnatural ability to find her doors. So he could escape and hide in there while being relatively safe. But he hasn’t built up a great connection yet with her. Seems their first encounter where he got knocked out is locked in, but possible he can warm up to her and rely on her for his survival.

What is a shame is the loss of time with Subaru and Emilia. They have a good starting point here though. It’s just too bad that those great moments are lost, though they should add to Subaru’s personal history with her and give him a reason to keep fighting. He got to see just how good a person she is and her kindness. There is really a solid chance for Subaru there, perhaps just because he is a breath of fresh air and because he doesn’t have any personal bias against her. Kind of weird that someone with either a connection to or similarity to this “Witch of Envy” would be a candidate for the throne. But yeah, hopefully Subaru can continue warming up to Emilia while seeking a way to survive. 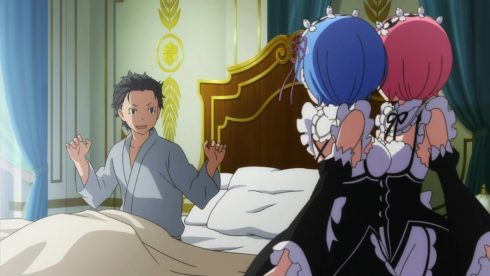 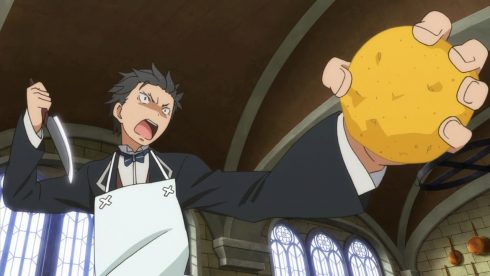 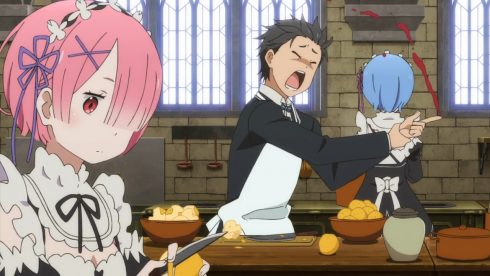 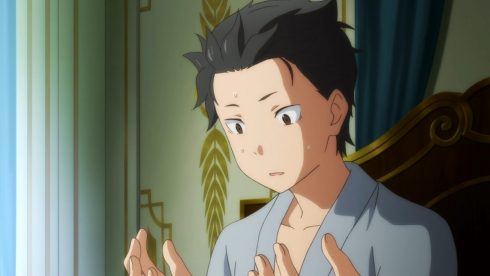 Will say that Rem and Ram are both cute characters with their own quirks. Definitely a set kind of twins, but not always acting according to expectations. Subaru sometimes predicted things right and sometimes was completely off. Rem is overall great cooking and cleaning while Ram is good but not great at cleaning (cooking is a nope). But maybe they still balance out if Ram has more…unusual skills. It’s kind of weird that there is potential to get along with characters where one of them might have killed Subaru. Though it didn’t sound like Ram was particularly interested in doing something dramatic….but she has her orders. Rem seems like a likable person, just blunt when it comes to Subaru. She does compliment his sewing….but then says like his existence it does not seem very useful XD.

Another really good episode. It wasn’t knock your socks off, but this is the start to an arc. I am curious about Subaru’s checkpoint system. It wasn’t when he first woke up and ran into Beatrice, but after that. It wasn’t even the day before he was killed, but several days before. While it’s good he didn’t reset back to the appa store….I’m left struggling to figure out how his ability works. Either way I’m looking forward to next week. It’s going to be a stress test for Subaru, trying to get through these days while figuring out why he died.