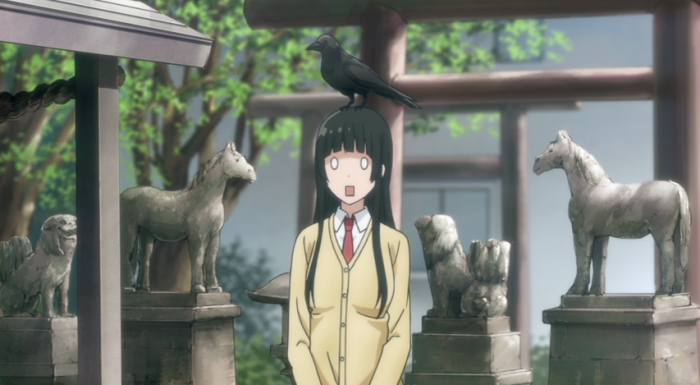 One of the definite strengths of this series is its deft touch in being able to intertwine the supernatural and the mundane in such a way that each colors the other without loss of their qualities or characteristics, but in a way that comes across as “jumping off the page”. The combination of “matter-of-fact’ness” and delicate care that the mangaka (and the faithful adaptation by the anime staff) really is not an easy thing to pull off, and is all the more impressive in how easy and effortless it appears to be thus far. And this balance of presentation has been noticed not only by many other commenters on the series thus far in the various internet mediums it is discussed on, but even in the comments on the episode posts here on the site.

Finally this episode features the arrival of one of the main characters featured in the anime’s OP and pre-air material snippets of information: it is Makoto’s older sister, whose name (not given in the episode itself) is Akane. At the beginning of the episode she is shown as a mysterious figure wrapped in the garb of a desert nomad (in the Sahara desert, we are later told) leading about a camel beneath the burning heat of the mid day sun. While travelling about she suddenly remembers that it is just about time for her younger sister (Makoto herself!) to leave home and begin her apprenticeship, and decides at the drop of a hat to go and visit her and see how she is doing, leaving the viewer with the definite impression of her possessing a rather impulsive personality. XD 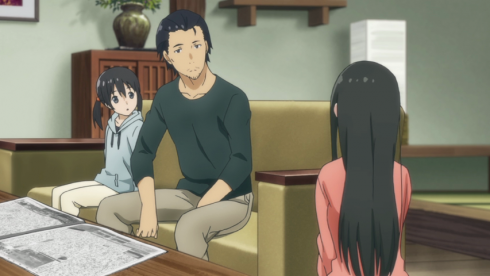 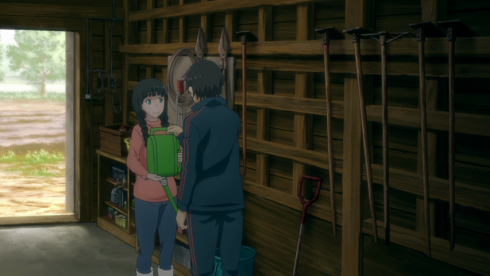 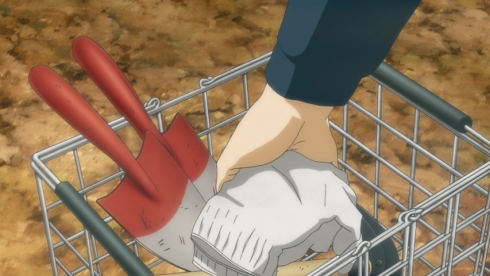 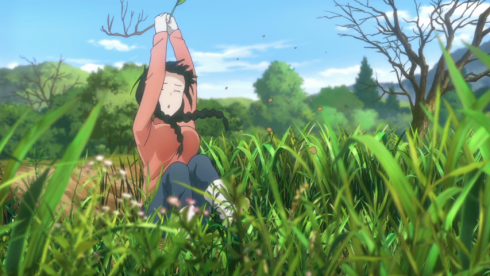 Meanwhile, “back at the ranch”, as the saying goes, Makoto is given permission to use an old plot of land by the father of the house (who apparently makes his living as a farmer and speaks in an incredibly thick local dialect) which used to be gardened by Kei and Chinatsu’s grandmother some time ago, but has since gone to weed through disuse. Kei and Chinatsu help Makoto weed the land and prepare the soil for Makoto to begin planting vegetables, herbs, etc. – apparently an important part of her training. While clearing the area they come across a wild pheasant (apparently there are lots in the area) and after some childlike goofing around they finally complete the necessary preparation – turns out the soil will need a little over two weeks to get to a stage where it can begin to properly supply nutrients to newly planted seeds and the like. 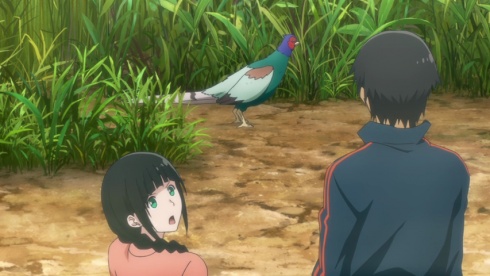 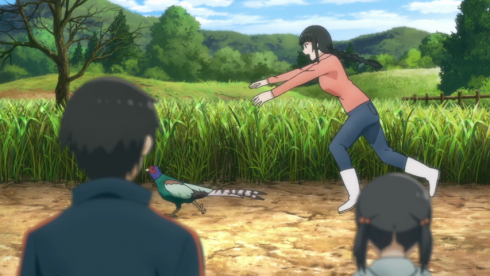 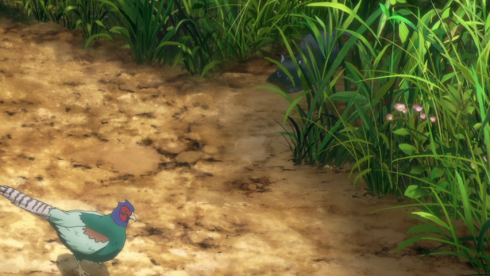 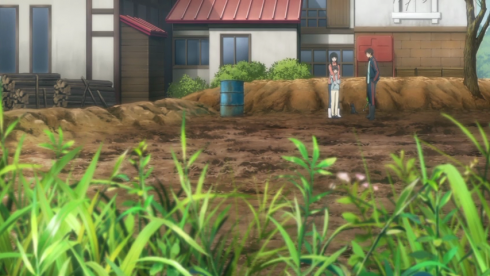 If last week’s episode focused on the supernatural in the first half (focusing around the Herald of Spring) and the mundane in the second (with the fried battered bakke), this week’s episode flip flops this pattern. In the first half we have the preparation of the gardening area for Makoto, but in the second half Makoto’s sister Akane suddenly shows up out of the blue all dressed in the desert nomad clothing, much to Chinatsu’s surprise – although she is showing herself quick to adapt when yet another strange “something” suddenly shows up (Akane) while she is watering the flowers the Herald of Spring gave her as a parting gift. It turns out that Akane is a world famous witch, and an incredibly skilled practitioner of magic (much to Chinatsu’s delight to discover … the two of them seem to get along very well together) – which explains how she got to Japan from the Sahara Desert in the blink of an eye: she teleported there using a magic circle. Literally. -_- 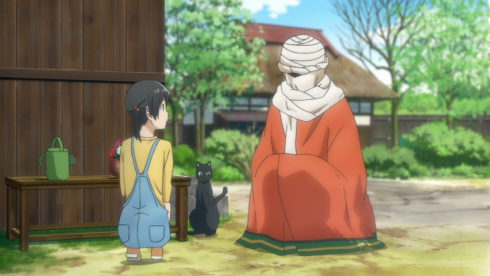 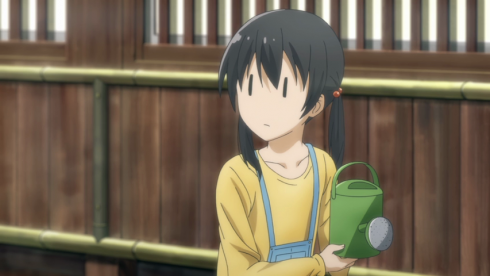 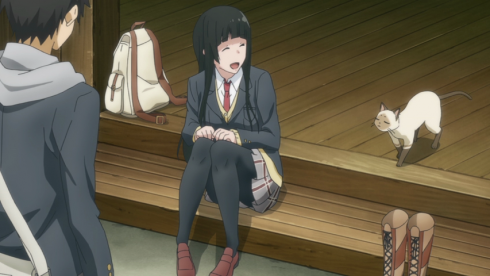 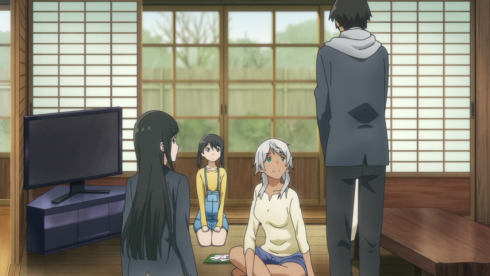 In the brief time Akane is present with Makoto (apparently she has visited the family’s house before as well) we learn a few other things about Makoto’s qualification requirements from a few bits of information here and there. Among other things it is expected that she practice magic to a certain degree and amount, and flying on a broom once is nowhere near enough of the expected requirements. So, after questioning Chito as to what Makoto has been up to and finding out she has barely used any other kind of magic Akane decides to show her a quick and easy spell she can cast bound up with how to summon a crow – Akane mentions how previously during wars witches would summon crows and use them for reconnaissance. After showing Makoto how to cast the spell (and how NOT to as well) Akane teleports (again!) back to the Sahara Desert with her cat familiar (named Kenny) … she “has a camel waiting” after all. 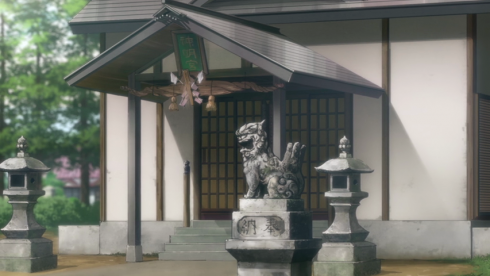 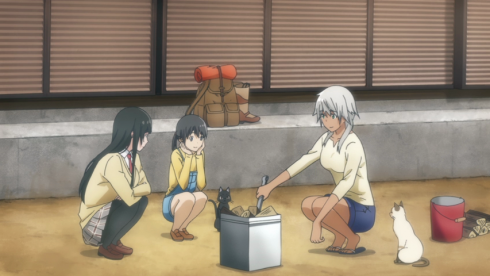 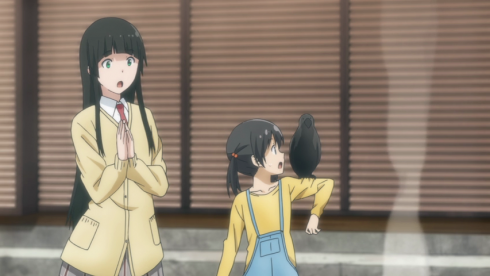 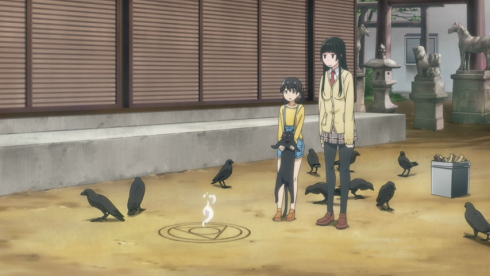 Perhaps what is the most interesting aspect of the interaction between Makoto and Akane is how it shows us a little more of the variety of types of those called witches in the story’s setting. Makoto can fly, and apparently is rather knowledgeable in matters of plants and herbs and the sort of things one might associate with an herbalist, but seems weak in the area of practical magic, whereas her older sister is a world-renowed practitioner of magic and can do things like teleport across the globe at the drop of a hat with no effort whatsoever. As a reader of the source material I can assure the readers of this post that there are other spell casters in the story (they mostly pop up among the other characters in the OP and are mentioned in passing in the pre-air material snippets of information linked earlier in the post), and that the overall image of the world Makoto is a part of will continue to be slowly illuminated in the particular manner the mangaka utilizes, but this episode definitely provided an initial taste in the horizons of that aspect of the series. Stay tuned folks! There is more to come! ^^