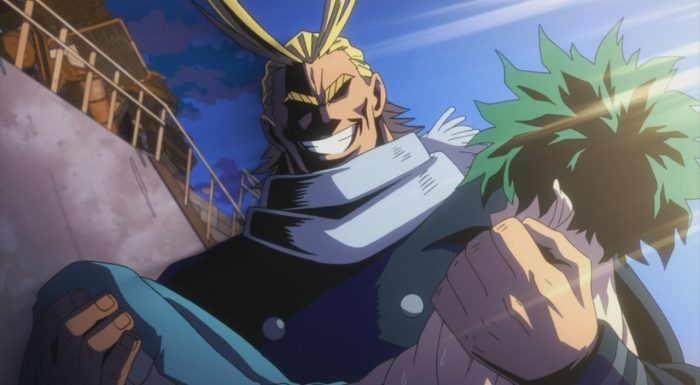 This episode was full of big moments for Deku. Finding out about All Might’s power and also starting his own journey to becoming a hero. This episode was a long road for him in and of itself. A 10 month grind to reaching the point where he could try to get into UA. Condensing 10 months into an episode was basically necessary since it would be unbelievable for Deku to be prepared to accept any of that power in a short amount of time or be insanely buff already. It would have helped, but such is how it goes. He’s starting from behind the start line in a sense. It took an insane amount of work, stress, and effort to just crawl to that starting line for his dreams of being a hero.

I did appreciate that there was a secondary benefit outside of having him do pretty cliché training. That beach was basically a trash site. It is a shame that both the city and the local heroes had never bothered to do anything about it. All Might has a good mindset. It’s not just about the flashy things for heroes, it should also be about volunteer work and doing good for the city. Even if the media won’t jump all over it and it won’t bring massive accolades, people will appreciate it. Having that area turn from a dump into a beach will benefit a lot of people. 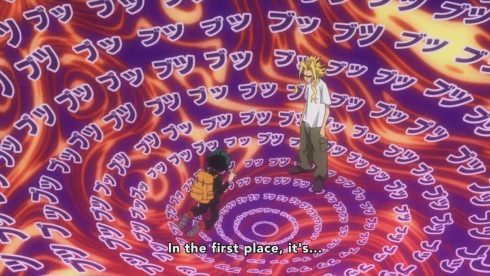 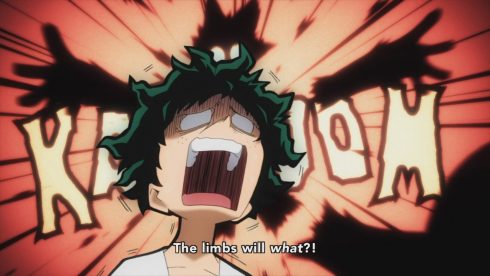 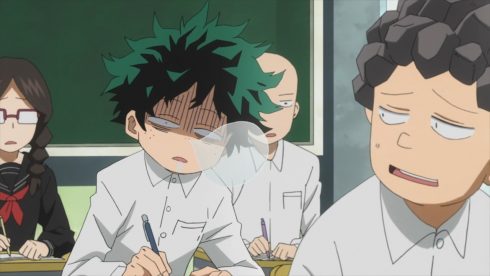 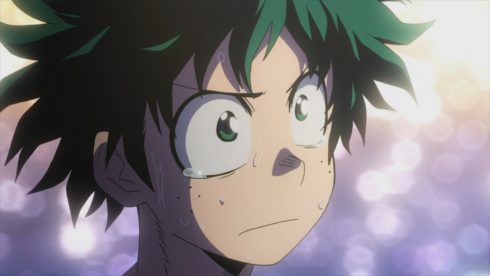 If nothing else you have to give Deku credit for his dedication. He understands that it’s necessary for him to work harder than anyone else. So many have had their quirks almost all their lives and maybe a lot of those quirks don’t require much effort to use or maintain. But this is an inherited power. His body has to be able to withstand it. But he doesn’t shy away from that and even tries to make it harder because he has that lofty of a goal. He doesn’t just want to be a hero, he wants to be a hero of the level of All Might. He fully realizes how much effort that will require.

Of course you do see the negative sides of Deku’s personality at play. He is very negative in some ways. Maybe it’s a given considering his whole life he had dreams crushed and was mocked by everyone around him. Not something easily shaken, much like his fear of Bakugou. Of course it was helpful that he didn’t bother with Deku all those months. Probably thanks as much as anything because of the shame and humiliation of having Deku try to save him. Though wow in other places constantly talking about killing someone would get you in jail, not taking a hero school exam… 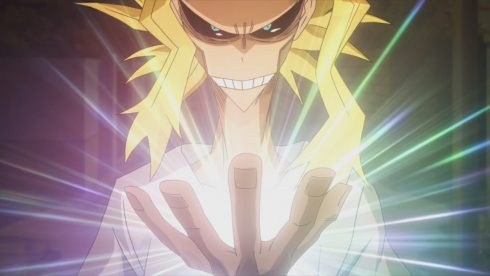 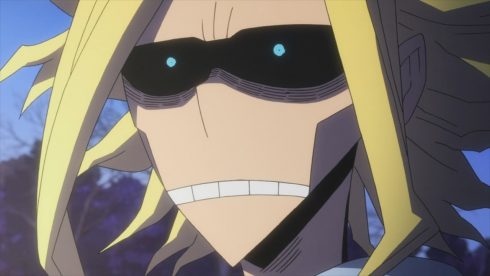 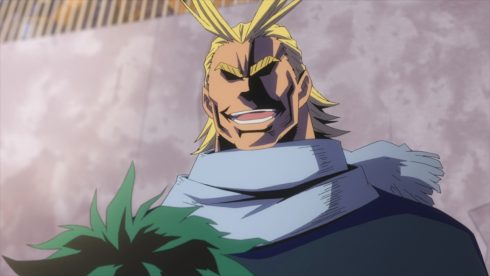 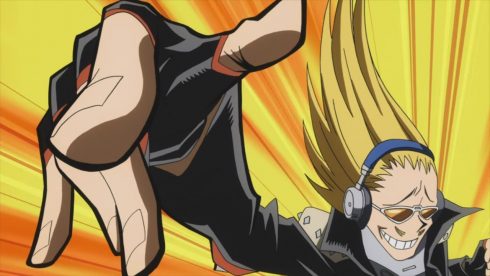 Probably the most interesting thing here is the “All for One” quirk. Seemingly one of if the only example of a quirk that can be passed on to someone. Not that the other quirks can’t….but that involves parents passing quirks on to their children. This is much more deliberate and specific. All Might and the ones before him can choose who they pass their powers to. It’s also not quite as random as having kids and finding out if they inherited a power and which of the parent’s powers they inherited. In the end it’s just not that common a thing to have these sorts of powers being passed on like this. No wonder he kept it secret…finding out that there is a quirk that can be intentionally passed along could lead to a chaotic response by the world.

The decision to makes sense for All Might. If he was at his peak then passing on his powers to a successor might not be an issue for him to consider. But he’s not at his peak condition. He’s deteriorating and barely hanging in there after suffering injuries of an insane degree. Practically crippled in comparison to what he was before that incident. He has probably been struggling quite a bit to find the right person to pass the power onto. Not sure if it can be given to someone who already has a quirk, but if not then it narrows down his options to 20% of the world’s population. Finding the right person with heroic qualities can’t be easy when he has to be so careful. He does have to find the right person as well. As we’ve seen his existence has changed the world. From one where super powered criminal activities were out of control to one much more stable. A literal symbol of peace. If he retired due to his injuries who knows what chaos would result from that. Has probably been a very tough time for All Might knowing how crucial his existence is. 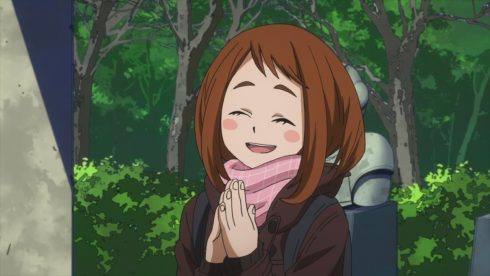 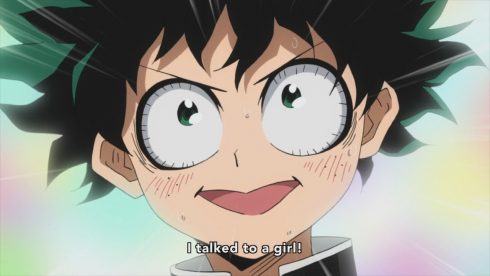 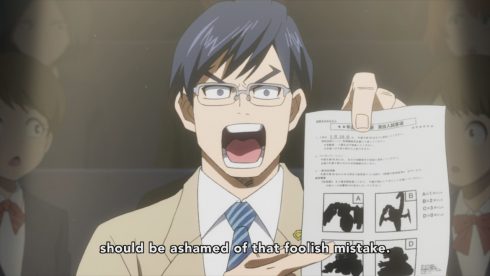 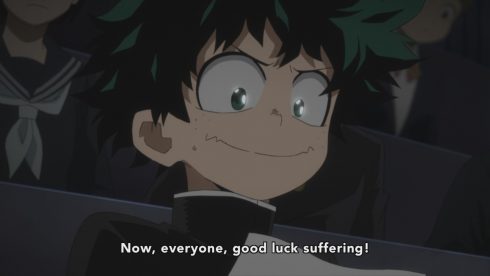 Now Deku has to move onto his hero exam. He’s worked, suffered and endured to reach this starting point. We finally as well got to meet a few other characters from the OP. Mr.Uptight and one girl who could be the female lead of the show. Not sure about the first, but the quirk for the second seems pretty nice. I’m not sure about this exam setup though. Isn’t there more to being a hero than pure destruction? Being able to do damage isn’t the only point here. Not sure how some like that girl will do. How much damage can you do with a gravity quirk? It’s a fun little ability though. Certainly helped Deku avoid smashing his face into the ground. Pretty useful in that kind of general sense.

Will be interesting to see how the exam goes. Probably going to be a tough one for a lot of characters including Deku who hasn’t had a chance to test out the power he got from All Might. He knows basically what it is….but knowing and using are different things. Hopefully All Might stays active with the story since going from the thin and sickly looking him to badass All Might mid-sentence can be pretty fun XD. A solid episode.