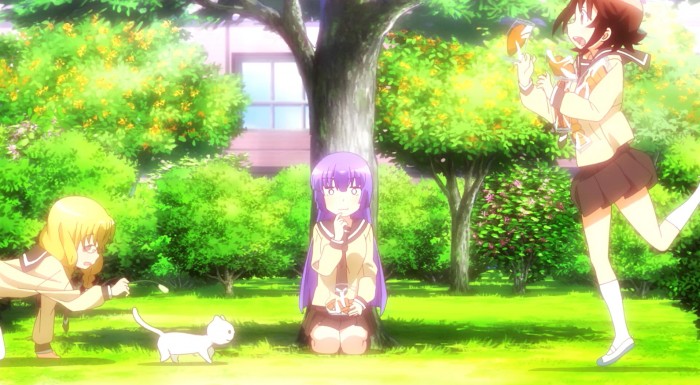 Flying under the radar of many anime viewers this season is yet ANOTHER Kirara manga adaptation named Sansha Sanyo, or “Three-person Trefoil”; and for those who do not know a trefoil is it is a three leafed plant similar to a three leaf clover, but of a different family (pea plants) with small yellow flowers. While the material may be familiar to fans of the Kirara manga variant adaptations, the studio this time around is one of my favorite that is making a name for itself  – Doga Kobo, and the visual look that they have developed over the years (with series like Mikakunin, Plastic Memories, Himouto Umaru-chan and last season’s Luck & Logic) really, really stands out in this series in the first episode already. 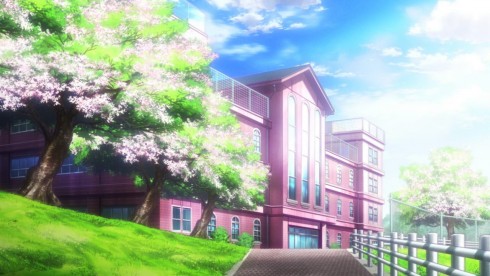 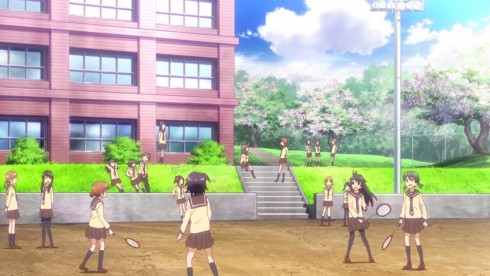 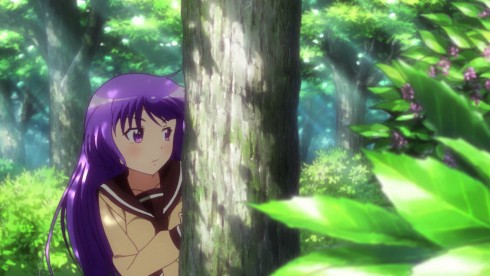 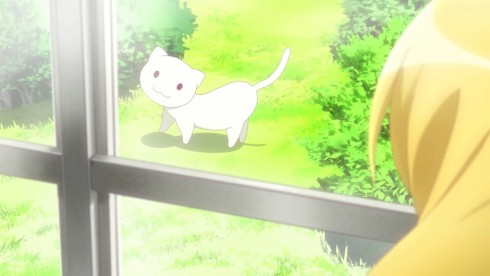 As mentioned above the series is a Kirara manga variant, which means “cute girls doing cute things in cute ways”. Here is a rough synopsis for the source manga: “The big eater and the new transfer student with a super energetic personality Odagiri Futaba, together with Nishikawa Youko, who is from a formerly rich but now extremely poor family yet still holds on to her princess-like attitude, and the class president with a surprisingly mean personality contrary to her innocent looks named Hayama Teru are the best of friends. But add their new friends into the mix and all hell breaks loose! With the forever number-two cold-natured girl in class, Serina Nishiyama, the kind-hearted blabbermouth Asako Kondou, and Shino Sonobe, Youko’s former maid with a love for conspiracy, what on earth will happen from now? These three unlikely students with clashing personalities become good friends and survive the day to day life of teenage life in a very funny story.“ 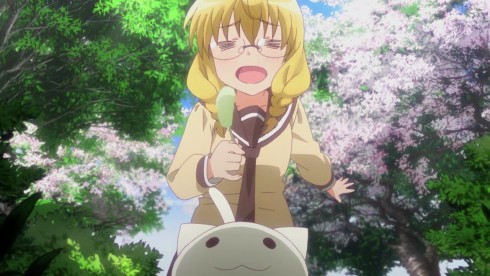 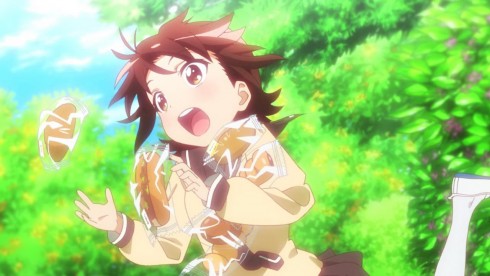 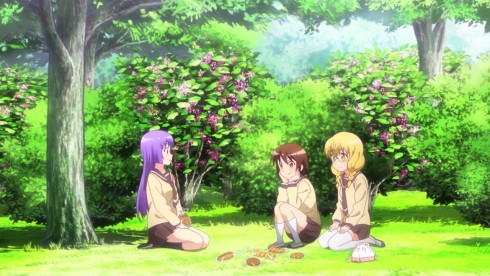 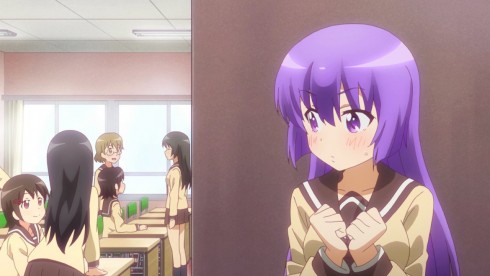 As mentioned earlier, Doga Kobo’s animation style really flexes it’s muscles in the first episode, characterized by extreme (and for me visually pleasing and even lovely) fluidity of movement – and interestingly primarily exhibited by the background characters. They even blend their distinctive “look” into the OP and the ED in a way that is different and yet reminds one of the Studio’s previous works – it is high paced, yes, but also includes a surprise of a ten second or so discussion between the three main characters. In distinction with the other main Kirara manga variant offering of the season (Anne Happy♪) the colors are much more subdued, but there are also background scenes using ambient light that stand out nicely. 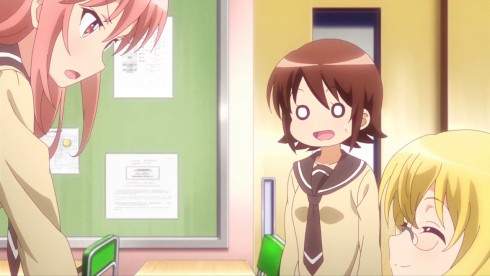 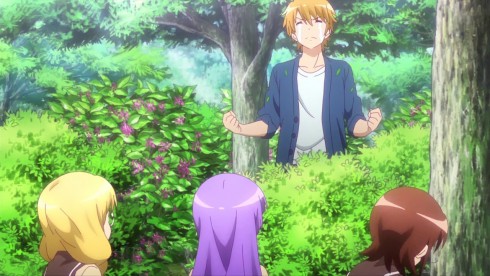 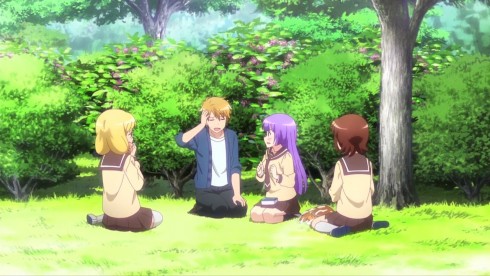 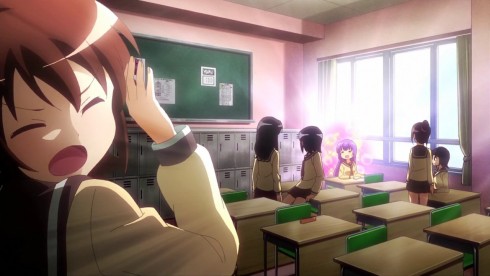 Interestingly the main character in the series (or at least in the first episode) seems to be Youko – the impoverished high society princess whose VA (the very recent arrival Wakui Yu) does a very good job speaking in the classic style “ojousama-speak”. Much of the episode involved the other two main characters (who are already friends and in the same class – Youko is in a different classroom). One of the more interesting things about the series premier ep is the success of the character dynamics – Doga Kobo somehow was able to make them gel and harmonize in a more natural and swift manner; a factor that is one of the most important (if not THE most important) aspects for the success of such a series. 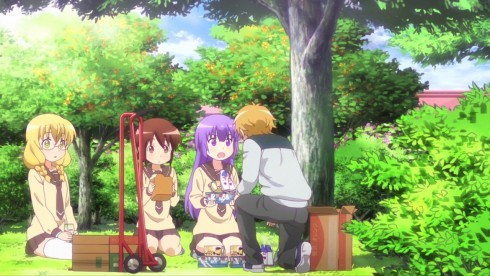 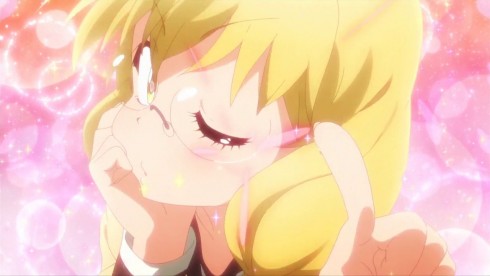 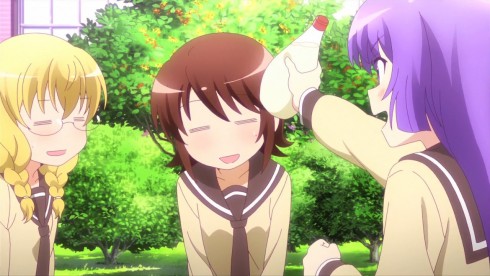 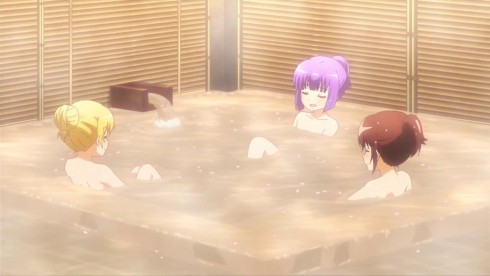 One of the more interesting things readers of the source manga have pointed out is how this adaptation actually improves on the source material – and of this I am not surprised: Doga Kobo as a studio seems most in their natural element when the subject matter is comedy, and they consistently have shown the ability to really “get” the material they take on and make it even better (Mikakunin and Himouto! Umaru-chan, for example). Another plus is the more significant role males seem to have in the series – one of Youko’s former servants keeps an eye on her while working an outside job, for example.

While some have thought the series might have done better if in a short-middle length format (perhaps like Wakaba*Girl?) I for one am glad Doga Kobo decided to go full length with it … it will give us the chance to slowly immerse in the “world” of the series and the characters. It is highly unlikely that I will be blogging this series, but I will definitely follow it, and would encourage all who enjoy these types of stories to do so as well.