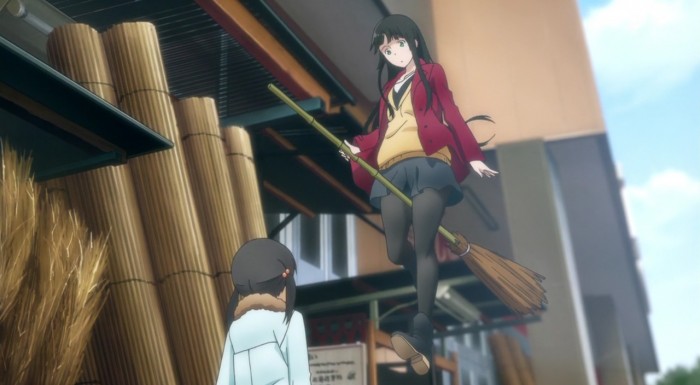 … No kidding or joking! The premier was excellent!

How I wish … how I fervently wish I  could somehow magically convey to those reading this post not only now much delight the source manga this anime adaptation is based on gives me, but also how surprised and taken aback I was at J.C. Staff’s treatment in the first ep. It surpassed my expectations, and I must admit that they were quite high based on the previews before the season began. What I saw was handled gently, carefully and with deftness and a love for the material – and in my opinion it showed. I was … blown away.

To be honest this yet another one of the series I happen to love (I have been following the manga since its release back in 2012) that is difficult to write about and describe. As a beginner, here is a rough summary of the series: “In a land blessed by nature’s bountiful beauty, bizarre things begin to take place. Makoto Kowata, 15 years old, is a professional witch. She left Yokohama with Chito, her black cat, to live in the house of her relatives in Aomori. This is where she begins to train as a witch. Even though Makoto’s powers are still limited to just flying through the sky, she and her second cousins Kei and Chinatsu surely make the most out of each and every day.” As one can see this is definitely slice of life type material. 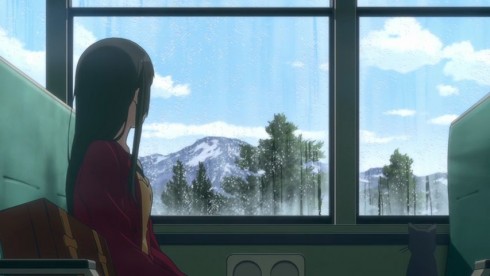 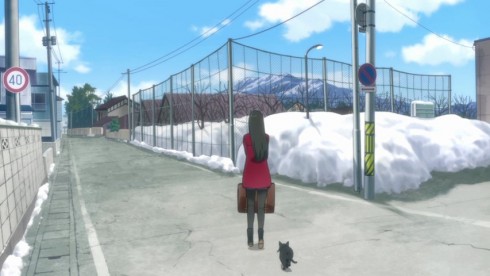 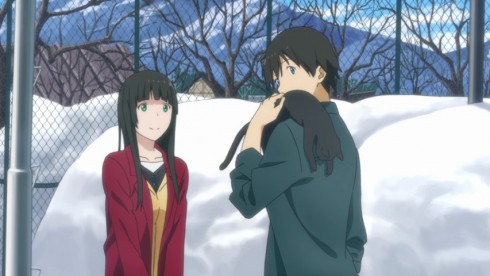 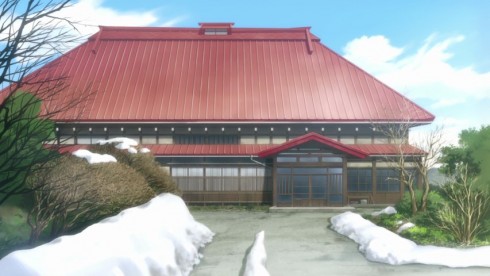 The main character in this story is without a doubt Makoto – VA’d quite nicely by a relative newcomer Shinoda Minami. The beginning sequence of the first ep, which is titled “It’s been six years” has several lovely animated and quiet sequences of Makoto in the process of travelling to the home she is going to be staying in with her cat Chito – a house of some of her relatives that she has apparently visited before. The young man named Kei who comes and picks her up at the bus stop remembers her (and Chito!) and is apparently rather fond of her as if she were a loved family member – and is able to convey his warmth despite the straightforward and low key manner of communication: we quickly discover that he knows about Makoto being a witch and being at their house to complete the steps to becoming full fledged. (We also discover that Makoto has a horrific sense of direction and Kei’s going to pick her up was because of that.) 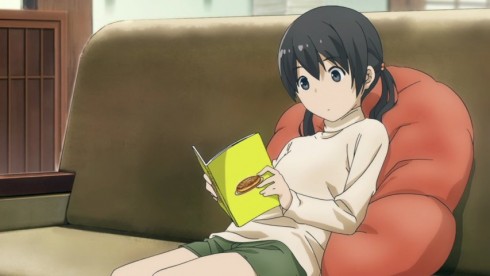 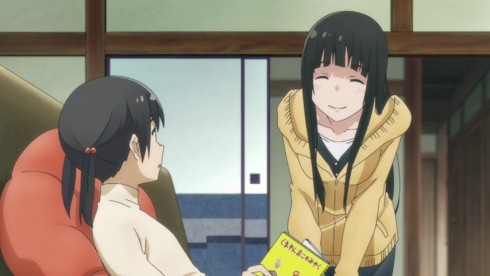 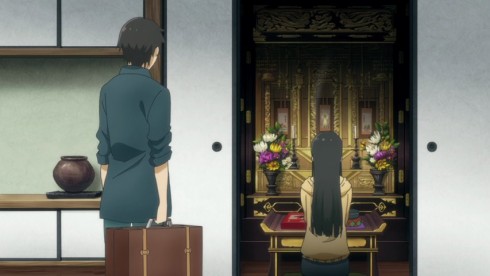 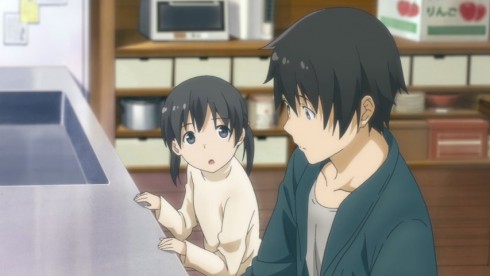 When Makoto and Kei arrive at the house we are introduced to another main character in the series – Kei’s younger sister Chinatsu, an observant young lady who is pretty smart cookie as well. She also happens to be adorable. Chinatsu is adorable. I like how she played along with the “she’s your mother” bit. (Incidentally, the conversation after this was followed shortly after by a scene of Makoto paying respects for an unseen person at a household shrine … I wonder who that was dedicated to?) Anyway, back to Chinatsu – I liked how she became adorably suspicious after hearing Makoto talking to Chito as well. And her reaction on being asked to take Makoto to the local store was very much in keeping with completing the picture of her – like requesting a donut in payment for doing so: no other word for it other than adorable. Chinatsu will gradually become more and more important in the story development, so I am glad she had such a nice introduction. 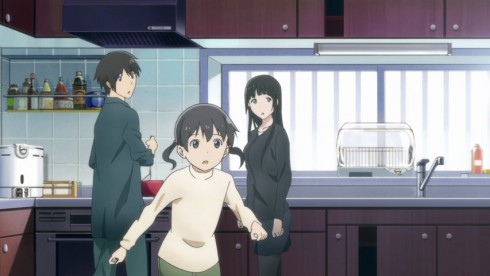 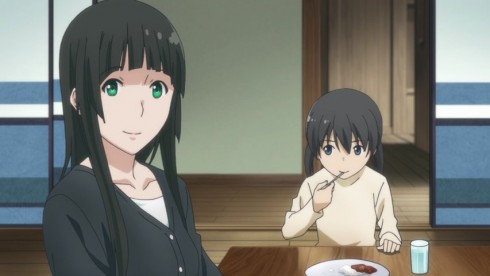 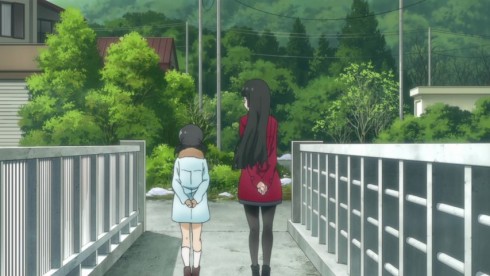 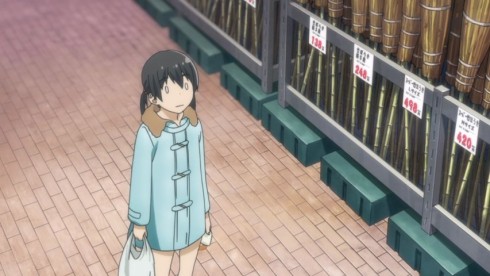 Chinatsu is indeed very normal in many ways – even slowly opening up to Makoto and becoming quite trusting after getting the promised donut (successfully bribed! XD); but really, the turning point of the entire episode focused on an interaction between Makoto and Chinatsu at the store. Makoto comes across a broom and muses whether or no it would be adequate for what she wants to do with it. She asks Chinatsu to hold her bad and then proceeds to float upwards … riding the broom … right in front of Chinatsu … who is (understandably) totally surprised. We see from this that Makoto training to be a witch is actually a serious thing, and that magic exists in this story. 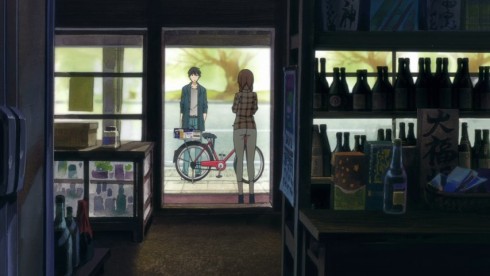 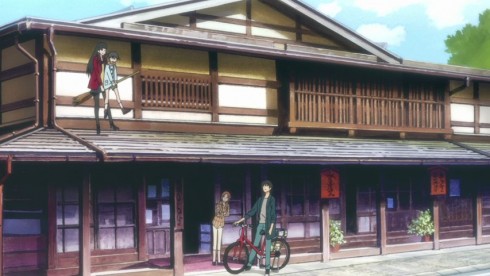 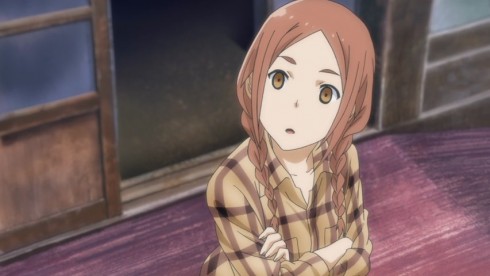 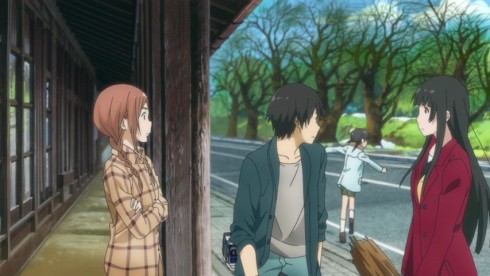 This storyline is developed when the scenes switch to Kei speaking with an old friend of his – a girl named Nao who apparently helps out at her parents’ family run liquor store. As they are chatting Kei mentions Makoto’s arrival and when Nao (maybe a teensy bit jealous?) asks about her Kei describes her as “mysterious and odd” and that it will make sense when Nao meets her. At that point we hear Chinatsu calling out “Onii-chaaaan!” and are greeted with Makoto giving Chinatsu a ride on the broom in flight. Nao is … beyond shocked. (I thought J.C. Staff nailed this scene and Chinatsu’s earlier surprise really well.) As Nao begins recovering from the shock we see Chinatsu at her most endearing – she becomes super-ecstatic after getting a ride on the broom. Seeing her rush around, too excited to stand still after the flight, was really cute. 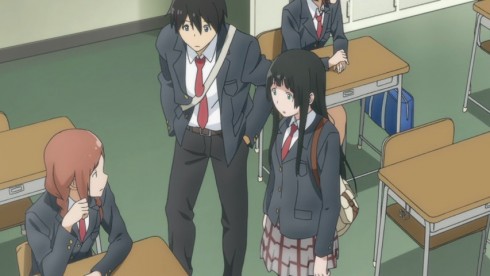 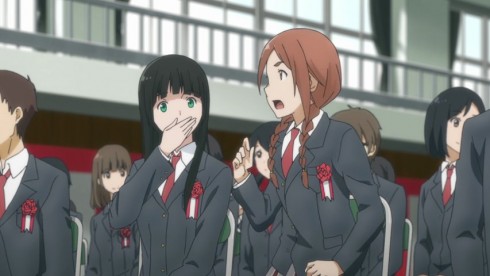 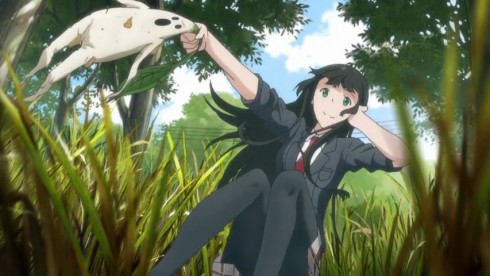 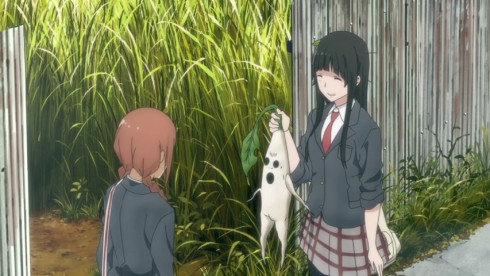 The final scenes are between Nao and Makoto becoming friendlier at school and afterwards, and Makoto’s sweet and kind disposition really begins to stand out … as does her slight airheaded tendencies and propensity to march to her own drumbeat. Nao will have her hands full adapting to that … and she received her second hard core initiation therein on being presented with a gift from Makoto – a mandrake plant (highly valued in witch circles!) that had been growing in the wild. The entire scene was plain … hilarious. Poor Nao! XD

Well, as one might be able to guess I am very, very happy about the adaptation and, as I mentioned elsewhere, this will be the series I will be covering this season. I can only hope that J.C. Staff will continue to be on their A game for this adaptation. Thus far it looks really good!