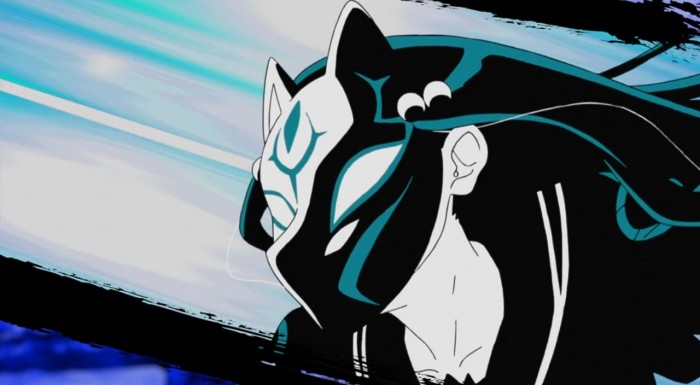 It is nice after seeing a lot of debut episodes that I’d only be able to call average, to have a first episode that I would call good. This was a good start to the series for Sousei no Onmyouji. We got to meet the main duo of the show, got a taste of what they are capable of and what kind of action we’ll be in for. We even got a bit of insight as to why Rokuro is not interested in being an Onmyouji (translated as Exorcist). Enough from his flashback to have the picture of what kind of terrible event he went through and how it molded him into the person he is right now. I’m definitely curious to see more of that flashback and find out how he ended up with this replacement arm. Since the flashback made clear that his original arm…didn’t survive the disaster he went through. An event that clearly lead to the loss of lives from people he knew and presumably cared about. 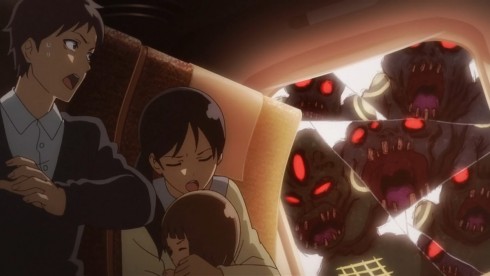 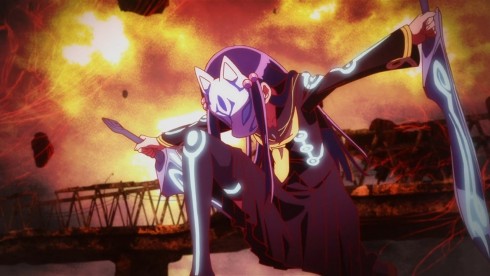 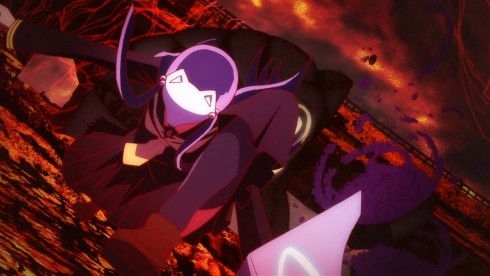 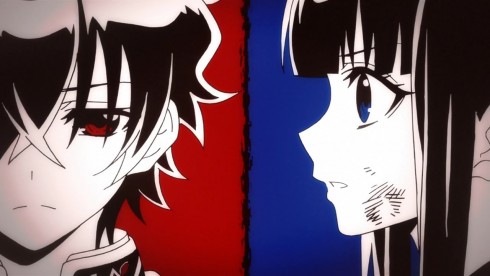 Rokuro makes for a great contrast with Benio. A girl who is clearly dedicated to her craft, perhaps to the point of being reckless. She is so determined to wipe out every last “Kegare” that she will pick a fight that she doesn’t need to. There didn’t seem to be a reason that she had to take on this opponent right now. She could have left with Rokuro and the kids and that would have been that. Of course these things are threats that must be taken on, we saw the influence and danger posed on the train. But it didn’t seem like they absolutely had to stand and fight here. Benio has a great mentality in a lot of ways. A courageous person who refuses to back down. But sometimes courageous can actually mean stubborn which might better describe her. No point committing suicide in picking a fight that isn’t needed.

But of course that wouldn’t have allowed for Rokuro to show off his skills and that would have been a shame. I hope there is a balance with these two. I’m ok with going speed vs power with them. After all if Rokuro completely outclasses Benio in every respect that wouldn’t make for much of a team. Sure, in some teams there is the big main character and the support….but I like some balance where I get it. Could easily be that Rokuro isn’t nearly as suited in his current condition for faster enemies. This one was just a big ball basically that made it easy for him to connect. Especially after Benio had been spending a fair amount of time bashing the heck out of it. 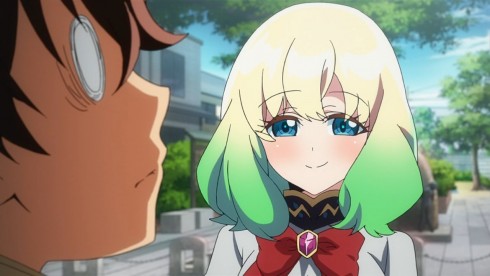 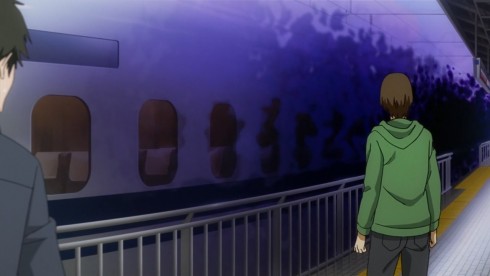 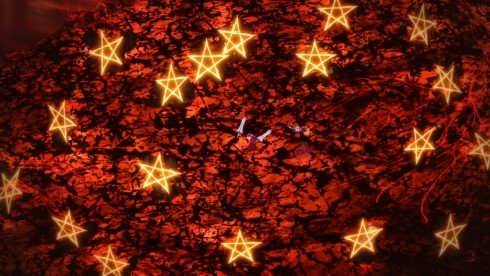 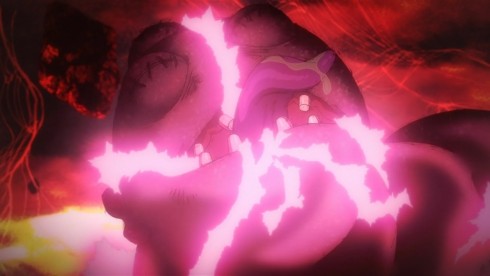 Visually the show looks pretty solid. The art style for the regular world looks pretty normal. I’d say it’s at least average if not a bit above average. The Magano world looked pretty stylized and I thought it worked. The enemies stood out with how they are animated and drawn so I’m for seeing more strange creatures pop up for our main duo to fight against. Was pretty enjoyable watching Benio speed through the Kegare that surrounded her at one point. Sure, it might be easier to animate a beam of light, but still made for an enjoyable bit of enemy slaughtering. At the very least it let her snipe 18 of those things (if not more) in one quick burst of attacks. Maybe taking on something as large and durable as what she saw at the end was above her ability…but it was pretty impressive. Plus if she had more talismans then maybe she could have pulled that off. It was impressive enough for Rokuro who has his own skillset to be taken aback.

No doubt that Benio’s existence and personality will be a good push for Rokuro. Her unwillingness to back off basically forced him into action. He did take some shots at her picking a fight she couldn’t finish, but in the end he did step up. Could have just gotten the kids out and leave it at that, but couldn’t abandon someone like her. Mostly just because she’s someone who still has the drive and desires he had before the Hiinatsuki tragedy. Something that was serious enough that it phased relatively good exorcists that we saw earlier in the episode. Benio should be a useful person in getting Rokuro to face himself a bit. He’s basically given up on those dreams he had as a kid and avoided fighting at all. But he couldn’t here and now that Benio has seen what he can do….I can’t imagine she’ll not pester him at all about it. 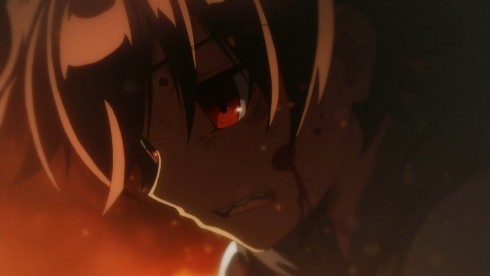 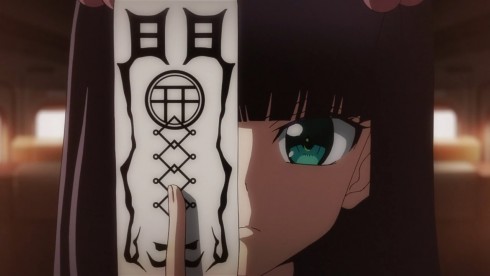 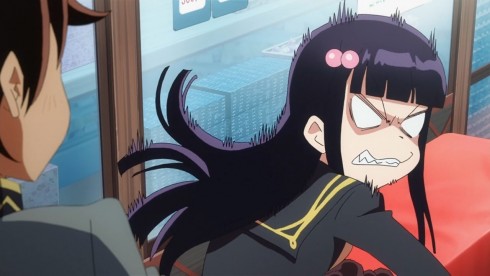 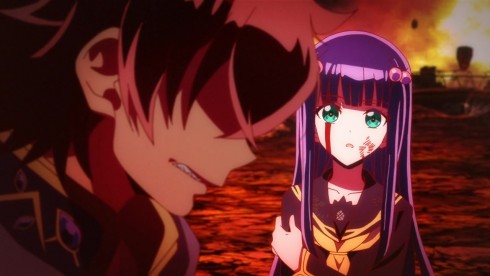 All in all I’d say it was a good first episode. We got to meet Rokuro, Benio and understand their characters a bit. There is probably more to learn about Benio to be sure, but this was a good starting point. This episode didn’t have that much conflict between our leads, but they didn’t really understand each other that well yet. Should be plenty possible that we’ll see them butting heads seriously in the future. Though maybe that’s a given considering the preview.

Not sure that I’ll end up covering Sousei no Onmyouji for the spring season, but it was a good first episode. I wanted at the very least to get my initial thoughts out for it. Seems like it will be a fun show to keep an eye on and definitely liven up Wednesdays a little XD.