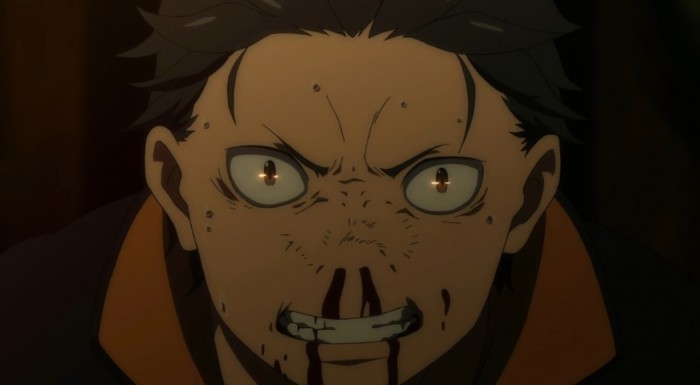 This is exactly how you pull people in for a first episode! Sure, doing a 1 hour first episode is kind of cheating, but I have no complaints. I don’t think they could have made it as full of impact if they had just released the first half of this. This episode had a “much watch” feel to it precisely because we got as much in this episode as we did. We’re now nicely set up and have a good read on Subaru and his ability. And if the show can make each episode as good as each half of this was….we’re in for a treat. To be sure it’s going to be a dark ride with some rough moments, but yeah there’s no doubt in my mind that this will be a strong show.

In the end this was a good way to start off. Practically leaping into this other world right out of the gate and seeing Subaru’s first day go horribly wrong. The crazy thing with the main character having the ability to go back every time he dies….it allows the main character to die rather often. Sure, it means death isn’t likely to be permanent in this show…but I’m not sure that matters. The experience Subaru has of being killed isn’t gone. He hasn’t forgotten what happened the previous time. So the impact of those deaths should weigh on him and when a character dies in this show…it’s not like they know Subaru will go back. They are facing death head on. 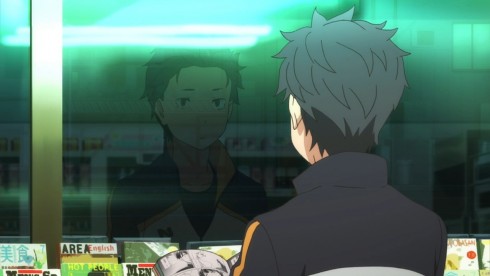 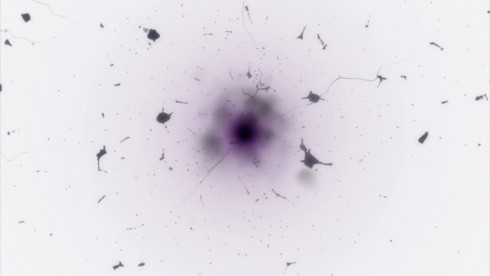 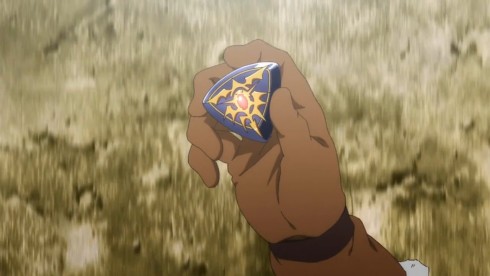 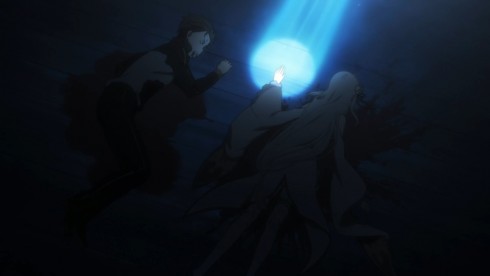 But yeah this is the kind of start that pulls you right in. There’s very little time spent in the real world before Subaru is tossed into this other world. There is a fair bit of mystery to that. Just the world shimmering and then…boom there he was. Mixed in with some scenes later of him dying the first time. Not entirely sure what to make of it. I wouldn’t say it’s an illusion or anything, but it is rather strange. Like stepping through a rift in reality. Either way, the show made sure to get Subaru there quickly and get the story moving. This is kind of like a mix between Konosuba and Erased. Subaru is dropped into this world without any additional goods or seemingly powers….well until he dies and gets flung back to the start again. The only power he is given in this situation is the power to seemingly rewind the clock once he expires. That’s both a useful power and kind of horrifying.

In a sense the power in Erased is a cute version of this. With this power there is no cutting corners. He actually has to die before he can go back and try again. Now to be sure I’ve never died, but I can’t imagine this kind of thing is enjoyable. Both times he’s been cut open and left to bleed to death. That’s horrible. Now to be fair it seems like Subaru is in good shape. He was able to beat up those goons in the alley on the second time around. Heck the first time he did fine, he just chose the wrong order. He thought the big guy was the major threat, but it was the one with the weapons. Bring him down and the other two weren’t a big issue. That encounter somewhat shows the possibilities for Subaru. He can find a way to succeed, he just has to figure it out. 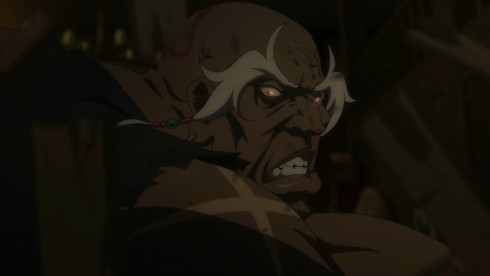 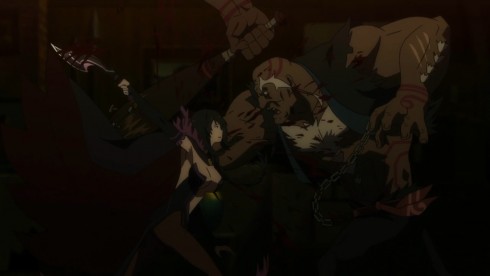 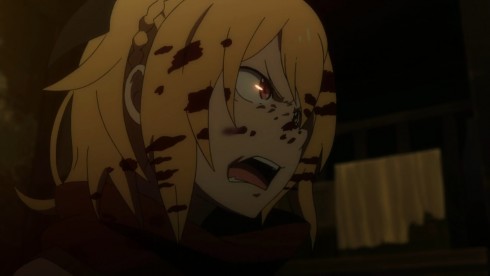 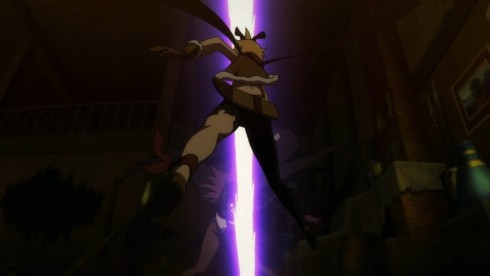 Not that he doesn’t have a tough road ahead in doing that. Elsa…is a monster. They might have been 1v1 fights, but she did topple Rom, one-shot Felt, and quickly took down Subaru. The first time she quickly ambushed Subaru and….well our female MC XD. I’d say Satella, but that was apparently a false name. Could just look up her real name, but figure I’ll stay in anime-only mode for now and let the show reveal that later XD. Now while Elsa was a monster, the obvious point is that she isn’t unstoppable. She even mentioned herself that if Subaru had jumped in earlier than things might not have turned out like this. While she did beat everyone 1 on 1, she fought everyone 1 on 1. If they can get Satella there and combine forces with Rom, Felt and Subaru….maybe they can pull this off. She’s a dangerous person, but shouldn’t be unstoppable.

One huge strength for this show is that it makes clear how fine the line between life and death is. The first time just had Subaru walk into that store and….cut down. Sure the show is trying to walk the line between showing too much gore and not enough. But it made clear how brutal Subaru’s injuries in both cases were. His side getting cut open the first time and his stomach the second. These are not good deaths. Though hard to say which one was more devastating? The second was more horrifying because it was a slow death, while the first was more traumatizing because he saw Satella go down after him. 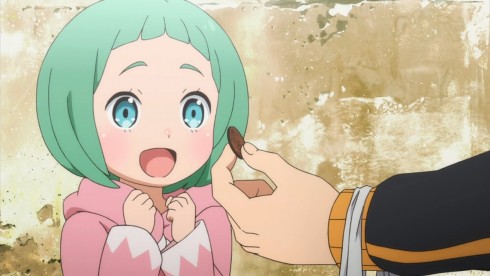 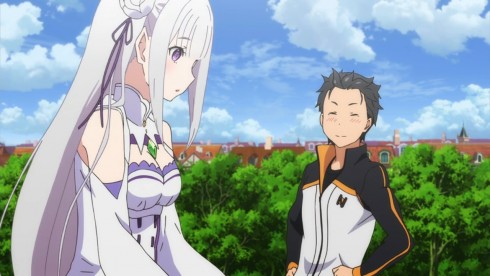 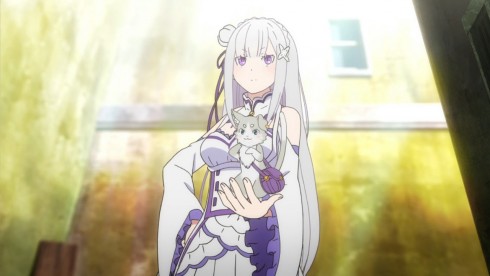 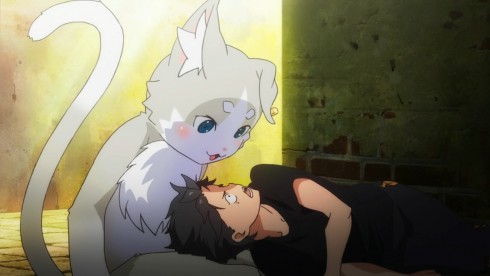 It wasn’t all death and doom though. The first episode was overall pretty nice with the moments between Subaru and Satella. Both going around the town, trying to find Felt and doing a few good deeds along the way. Subaru himself is an odd person. He did do some odd things trying to use magic or walking into a bar for demi-humans before getting thrown out. Had a pretty rough time before he met Satella. But he’s not a bad guy either. He did want to help the person almost run down in the streets and in the end did help out that lost kid, cheering her up with some sleight of hand tricks. Sure, I think part of it is that Satella is a gorgeous character, but being attracted to someone isn’t a sin. The other part of the reason he helped was that he was worried. Satella is the type that will help out people when she sees them even without any real merit for herself. After all she lost track of Felt when she took the time to help Subaru and take care of his injuries.

While “Satella” is an odd girl, she’s already one of my favorite parts of this show. Doesn’t hurt at all having the same VA as Konosuba’s Megumin XD. In some ways you could say tsundere, but really she’s just a very helpful person who tries to make excuses for why she stops to help anyone in need. Even though Subaru didn’t seem to have any answers she still saved him and took care of him. Sure, she gave the excuse that she wanted intel, but she had to know that someone getting attacked in the alley probably wouldn’t have much to tell her. She’s just a very good person. Dishonest about her motivations at times, but a good person. 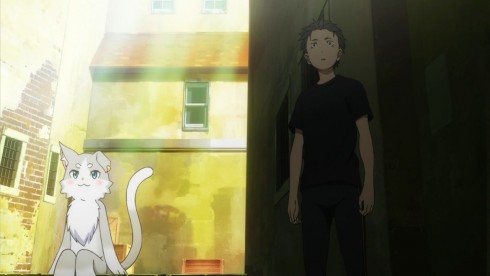 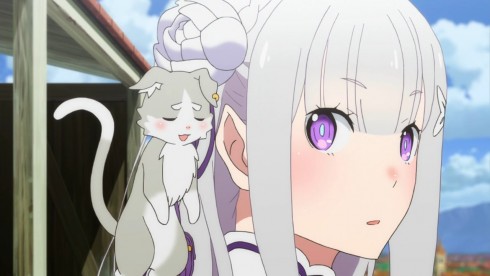 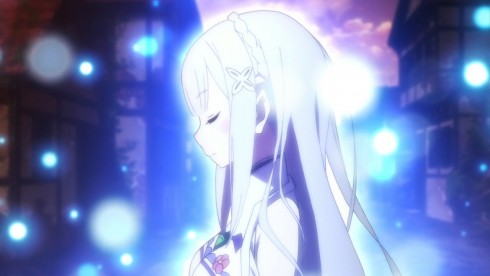 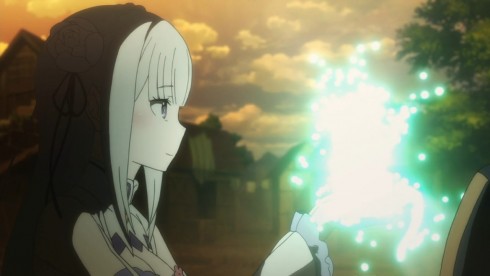 I can’t even say her not telling Subaru everything is a negative. It is clear there is serious bias out there and being a half-elf is a bad thing. Although to be fair this is a world with a lot of non-humans so I’m not entirely sure about the racial relations here. Will say though that even in the first time line Rom was dead when Subaru found him. It does seem like Elsa would either turn traitor on the deal or kill him regardless. We didn’t see Felt’s body from what I could tell though that doesn’t mean she wasn’t killed as well. Being a giant….I just get the feeling there was some race reason for Elsa to kill everyone. And she did freak out when she discovered the connection between Subaru and Satella. As if there is something hugely important involved there….

Would be a shame not to mention Puck who is a pretty adorable spirit XD. Will probably enjoy that character as much as anything. Liked the cute punch he gave Subaru when he was so nice to Satella on her being a half-elf. Something that clearly bothered her to admit to him and she probably expected to be rejected on the spot. The one downside to the repetition is that this interaction technically hasn’t happened from her point of view. Subaru is going to build up these relationships and then have to start them over from scratch…that’s exhausting. 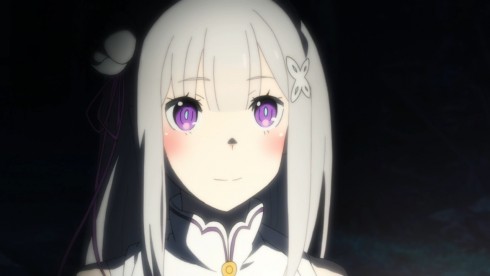 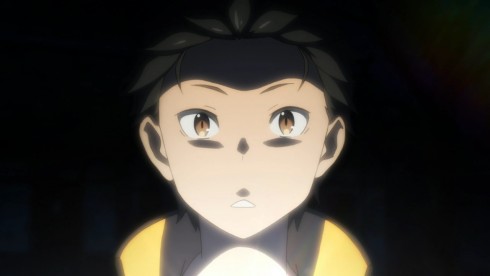 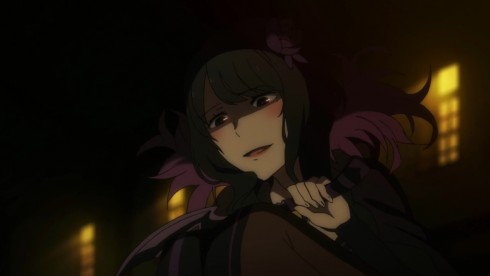 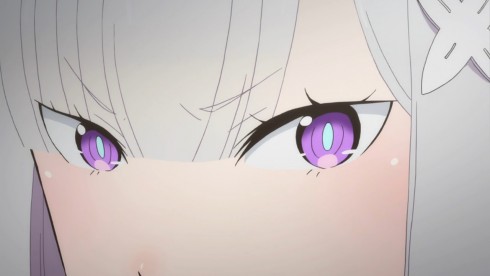 In the end this is definitely the kind of start I hoped for going into this episode. A long enough episode to just get into the story and see where things might go. It’s a tough ending though since Subaru is still kind of confused about all of this and has to face a pissed Satella. Though if that name was so bad…maybe she shouldn’t have used that as an alias when introducing herself to him the first time…Not that the current her knows about it. Regardless, a tough situation for Subaru. I wish him the best of luck in figuring things out. The tricky thing is that he has to figure this stuff out. Both how to deal with this threat and also to get everyone on the same page.

A good start for this show and here’s hoping the rest lives up to it. Not locked into blogging the whole show yet, but a definite possibility.