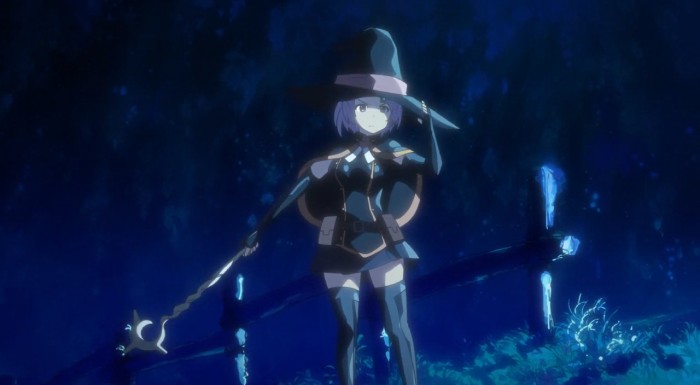 And so Grimgar also reaches its conclusion. It has been quite the ride with this show. Getting to see this small group having been dropped into a world they knew nothing about and having to find ways to grow and survive. A show that really prided itself on the concept that this bunch had no memories, no special skills, and would just have to make do. Kind of ironic I suppose that the last fight of the show comes down to the MC having a weird special skill that lets him obliterate Death Spots despite his body being busted up and in terrible shape…. 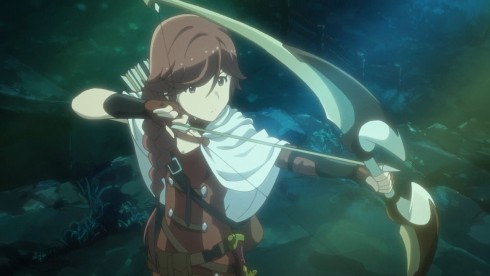 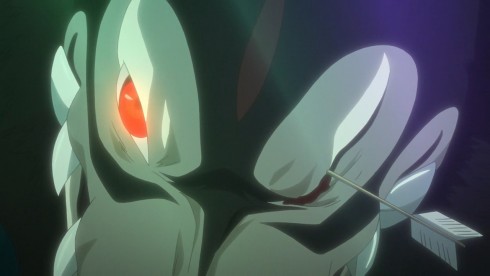 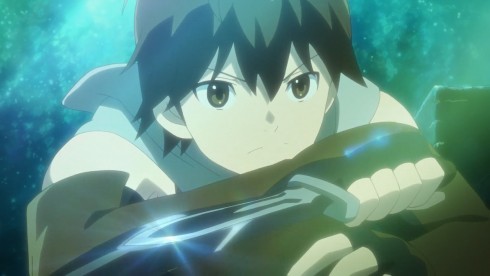 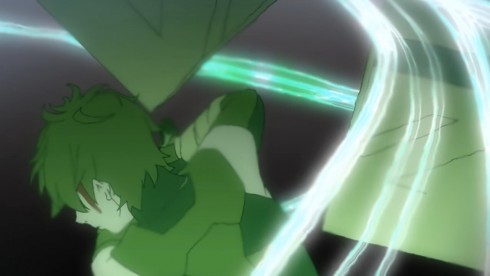 If I sound a bit annoyed it’s because I kind of am. This show has been so consistent about the characters building up their skills and overcoming threats as a team. How did they handle the goblins and avenge Manato? Team work! Even in that fight where Haruhiro went after the goblin that shot Mary…it was one goblin! And even then he only really pulled it off because Yume kind of shocked him into action by calling out to him. It felt like a struggle to the death. Here? He just goes into god mode and obliterates a monster that massacred Mary’s team and sent his own into full retreat. Sure, they got some hits in on that thing. Yume’s shot to the eye was great, but I just couldn’t get into Haru’s showdown. I mean look at that fight. He dances along Death Spots arm, stabs him in the eye, flutters down from his head….and then cuts his freaking sword in half! What is this guy? Zoro? I don’t care if he’s seeing the lines of reality here. Little dagger….massive sword….he’s not freaking cutting that in half! Especially not in such a way that it launches a sword into the kobold’s freaking body, killing him.

I know this was supposed to be a cool moment and Haruhiro’s glorious victory. But I just couldn’t buy it. Effort? Team work? Some believable growth? Nah, let’s just give him a super power up. I get the idea here. Against something that gets tougher the more it gets hurt, burst damage is the key. But this was just pushing it. Heck just letting him blind the thing and then run away would have been fine. They didn’t need to kill that thing right now. It’s not like they really used that death as a focus for Mary finally seeing the creature that killed her friends go down. That wasn’t even a focus of the episode anyways. So have them get a lucky break, and get out. That weird vision was fine for smaller incidents, it never took away from the group combat. But here? It was too much. 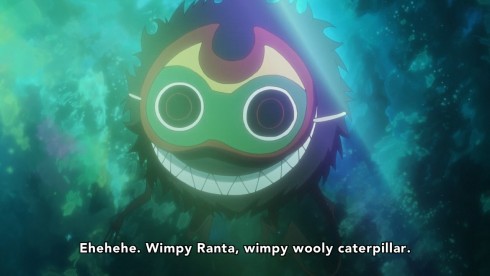 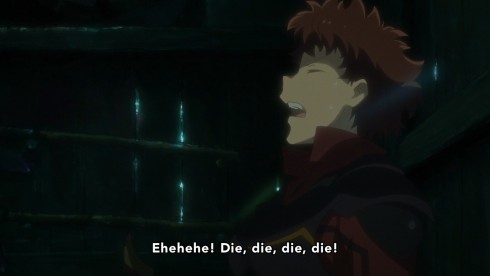 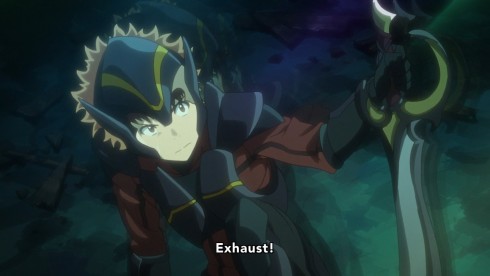 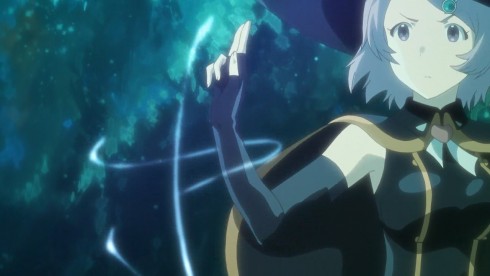 The rest of the episode was good though. I just had to vent a bit first. Outside of a random error (Ranta’s helmet randomly appearing on his head for a second) it was good struggle to see Ranta try and survive. I still don’t like his character, I still don’t like him as a person, but I can appreciate the effort towards survival. However he managed to climb his way up to that level, he certainly deserves praise for doing what he could. He really struggled, hid, fought, run, and doing anything and everything. It’s a credit to his desire to stay alive. Ranta did step up as well during the last retreat. Though I didn’t like the idea of the fight, I approve of him at least taking up the mantle of responsibility when necessary.

It was a nice group effort in order to support the Ranta rescue and run away. Some nice shooting by Yume who has shown her growth in a nice way. Shihoru was plain awesome with how she was doing so much better with her magic. The girl having learned a lot and making the most of her abilities now. Moguzo was doing well and Mary supported nicely as well. Everyone just working as a unit to get to Ranta, heal him up, and get out of there. I wouldn’t have even minded that being the last battle. A great and daring rescue mission that worked out perfectly. It was pretty intense though to be sure with the Death Spots chasing them even up to the upper levels. That level of tenacity and battle fury really is something. 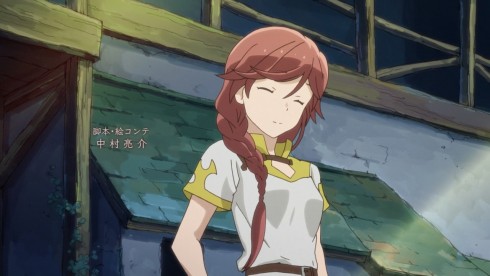 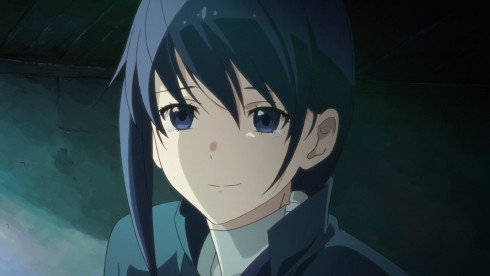 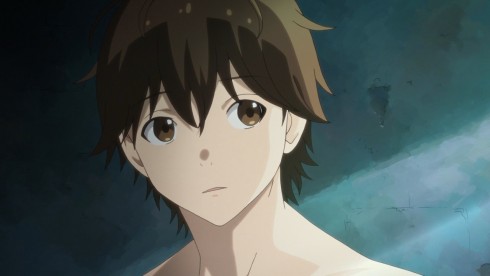 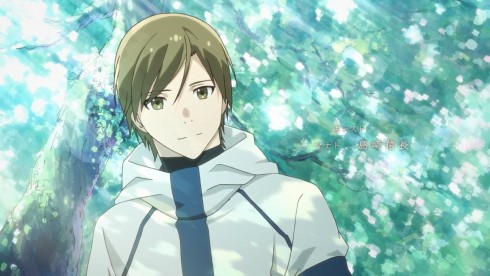 The aftermath was pretty enjoyable I thought. Haruhiro getting healed up and everybody just taking time to recover mentally from what had gone on. Muguzo even getting a new weapon out of it. They certainly continued to push the Haru and Mary pairing, but that’s fine. Both are likable people so that’s hardly a terrible angle to go with. Wouldn’t have minded someone rebutting him for basically throwing in the towel before his fight and tossing his badge to the ground. In the end it was just a solid bit of epilogue.

Getting to see Renji again was good. I agree that no real apology was needed. Their group was a mess at that time and honestly anyone would feel purely pity while looking at them. And it was also nice to see Manato one more time. Though shows that Manato meant the world to Haruhiro. Though I worry at this point about the regularity he sees this image of him. Their leader might be losing it XD. 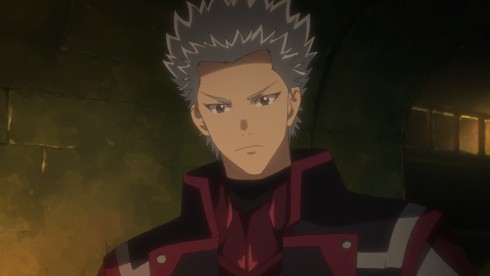 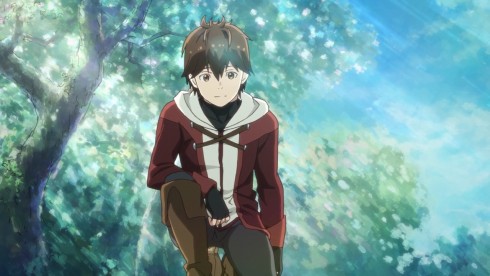 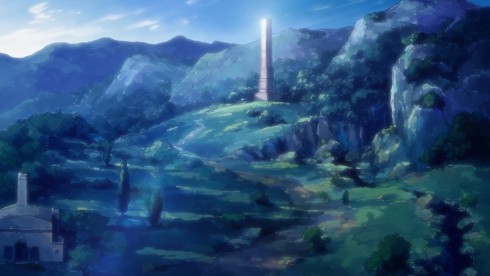 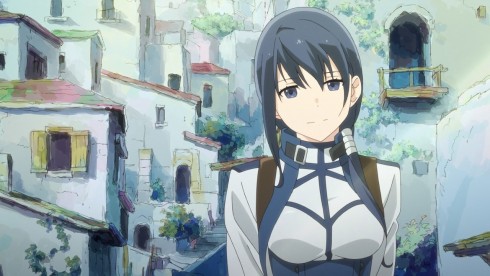 In terms of a last episode it was solid. They managed to save Ranta as expected and no one died along the way. And good for Ranta this episode. Got to see his demon, got to see him struggle and use his head to survive…just a good episode. I still don’t really like Ranta, but I respect how hard he tries to stay alive. If he could just fix his personality a bit then he’d be in good shape.

The show as a whole was very consistent. It moved mostly at a slow pace and just let you sink into that world. Some characters got more development than others, but they were mostly a likable group. It is somewhat sad but realistic how they are now absorbed into their lives there without any desire to regain their memories or get back home. This is where they are now. Whatever system or beings brought them there, the success is undeniable. You have people who are fully accepting of their roles as volunteer soldiers and fighting for as long as they can.

Goodbye Grimgar, you were an interesting series. Certainly one of the top shows of the season for me. Even if I didn’t love the last episode, the overall journey was more than worth it. 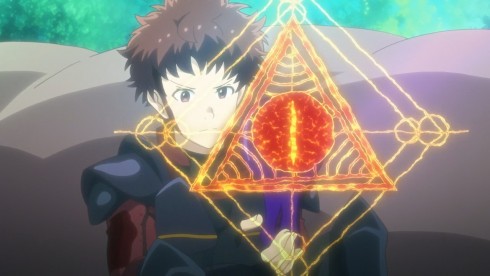 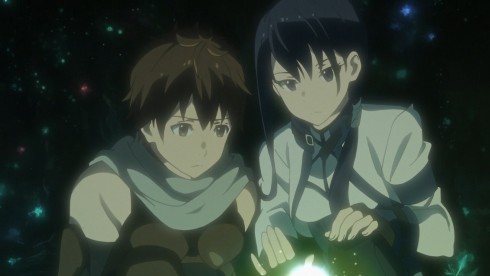 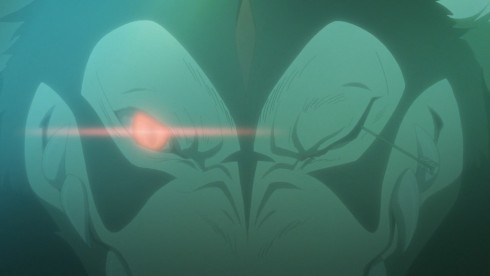 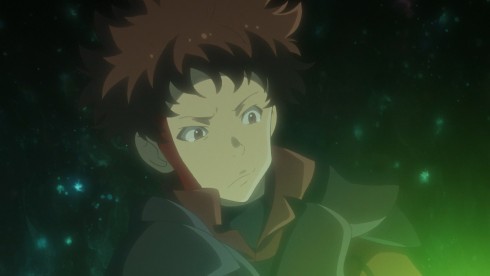 Final Thoughts
This has been quite the adventure. The first few episodes I think were some of the best for the show with the highlight easily being the showdown against the high tier goblins. That was just a glorious episode and full of enjoyment XD. The focus on tackling the mines and Death Spot honestly wasn’t as good, but it was still a decent enough way to finish the show. Just a slight step back in comparison to the early focus. Seeing these characters having been dropped into this fantasy world and having to figure out how to survive was really interesting. I enjoyed seeing how they found ways to overcome slowly, but surely. They started out so poor and barely able to budget out meals because they couldn’t kill anything. They had to build from the ground up and that was something.

So many shows make it a quick rush to a group improving and getting stronger. But this show had it really feel like a journey to get there. They reached some of their darkest hours before they finally overcame. And even when they felt a bit stable and confident, they got knocked back down to reality and had to get up again. So much time and effort put in by this group in order to get through Manato’s death. I do think that while it was the classic example of only killing one person to create a threat of death, it did have a good result. We weren’t that attached to Manato himself, but this group was. It was their pain from the loss that was the important thing. 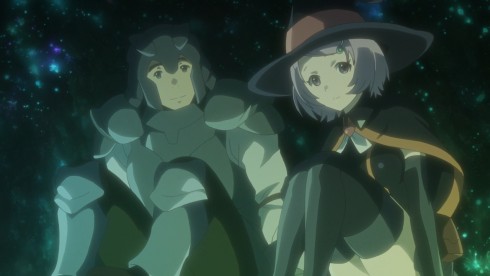 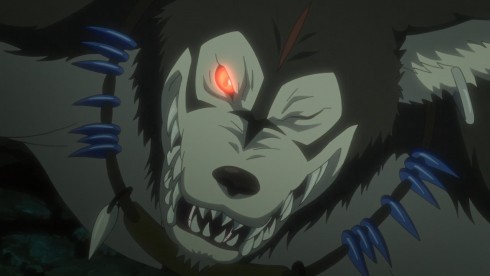 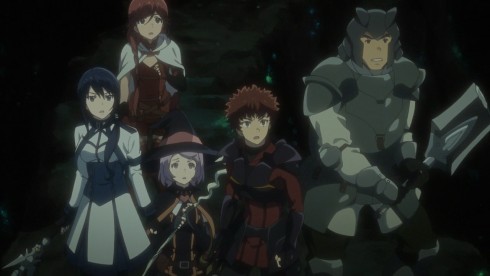 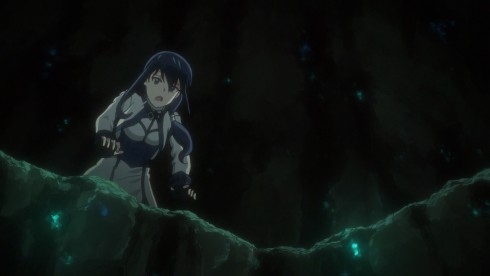 It was such a good looking show as well. Nothing but praise for the effort put in by the staff on this. The water colour style worked really well. The world itself despite it being a dangerous place, really did look quite nice. The characters also looked really good, the designs fitting pretty nicely into this world they made. Sure at times they went for some…interesting angles for characters like Yume, but the show still looked good and so did the cast. The action flowed really nicely as well. Maybe things slowed down at times for a bit of monologue about abilities but the actual battles really did stand out.

The big thing of course was the music. With the group “(K)NoW_NAME” getting inset songs all over the place. Sometimes those songs…didn’t quite feel necessary. There was a lot of times though I felt they fit pretty perfectly and just added to the moment. You can do some nice silent storytelling with just visuals and the music and this show did make use of that at times. I do think there were times when they shouldn’t have had to force an insert song in, but that was a pretty rare thing. 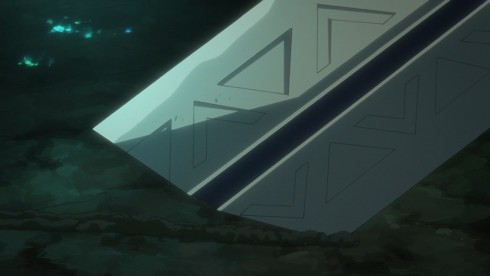 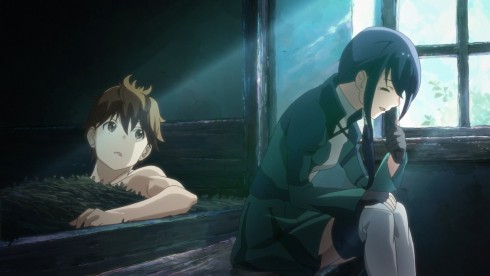 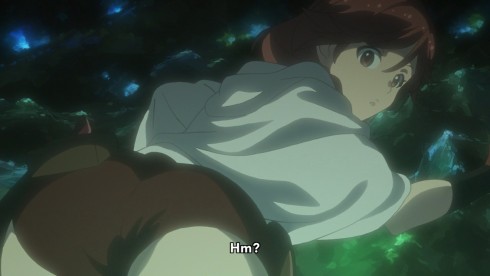 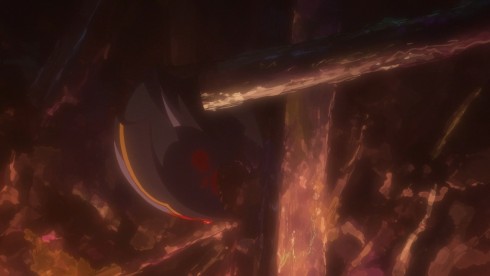 In the end I really did enjoy watching this show. Haruhiro was an enjoyable lead. A quiet person, but one who had to rise up to leadership in a hurry. Yume was easily the best character of the show. Nothing but positive energy who was a strong emotional support for people to have. Helping keep the mood up with her personality and occasionally going off on tangents with her stories. Mary though really grew on me as the show went along. They did a classic move having her start out a bit frustrating, but as she opened up she then became more likable. Just getting back to the kind of person she really was and not the wall she kept throwing up.

I’ll certainly miss this show. No idea if it will end up getting another season, but if not…this was still good. It was an enjoyable ride. Even if not all the mysteries of the world have been solved and even if the last episode wasn’t amazing….it was still one of the best shows. Just a show that won’t appeal to everyone. The slow pace really did have some just reject the show. But personally I was hooked pretty early on and it stayed that way until the end. Grimgar will be missed.