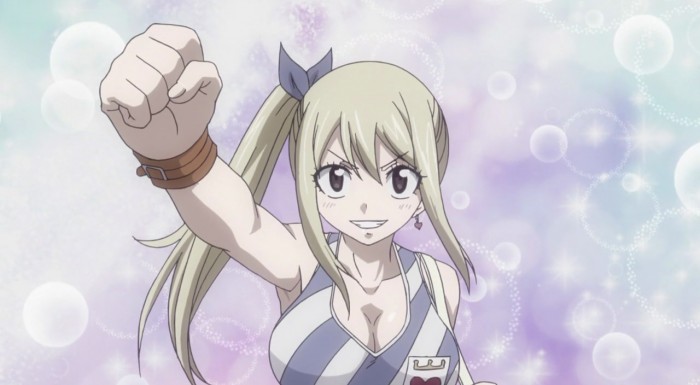 I’m honestly not really sure how to feel about all of this. After this week’s episode which had the storyline as a whole put its best foot forward, its hard not to anguish and be depressed about losing Fairy Tail again, as an ongoing anime series at the very least.

Yet, I will say, the tone of the episode and the subject matter in general could hardly be more fitting. This week’s return to the present was an almost somber reflection on the idea of loss of one’s friends and drifting away from the group and people that were not only family, but a stable fixture in your life.

I mentioned, way back at the end of the Tartaros Arc some months ago, that I felt really bad for Lucy, who had just lost her closest friend Aquarius to save her friends, only to just lose them all as well.

A part of me couldn’t get why Mashima-sensei would do that to his title character, and then just kinda brush it off, but as is always the case it seems, it all makes sense now. Lucy’s loss of her friends, her support group and the people she hung around with and went on grand adventures with, that’s the focus of the episode, and it’s a darn powerful focus at that.

Mashima-sensei, as a writer, has always been great at giving people the feel good moments, but its only in recent arcs, that he’s been able to really dish out that tinge of pain and emotional power that often come from life’s sadder moments.

And man, has the year since the conclusion of the battle with Tartaros been hard on Lucy. I love how the series jumps forward a year, and then uses Lucy as its framing device and lens for showing us all the change.

First and foremost, we leave Magnolia, the home of both the Fairy Tail Guild, an the series as a whole. Lucy’s left her “home” behind and is now living in the capital, which provides its own kind of culture shock.

There’s a genuine sense of aging, at least for me, in how both the world and Lucy are presented to us this week. Its like that weird period after having graduated high school and college, and how life changes, both in terms of what you do and just general surroundings.

I’m not entirely sure how much of this episode is filler and how much of it isn’t, but I appreciated the slow, focused episode that broke down Lucy’s current life.

There’s a sense of healing and having moved on that definitely eminates from the entire episode and Lucy herself. This is a girl who went through a rough patch in life, finally recovered and is moving forward with her life again.

There’s almost a sense of that same sort of feeling one gets from a bad breakup, and the depression and pain that comes after that. The way Lucy kind of works herself through the bone and manages to become a writer, are almost synonymous with how a lot of people tend to cope with loss of loved ones, myself included.

I could really relate to Lucy, and the stuff that she had not only gone through, but was still going through. That sense of finally being stable enough to not revert back into depression, yet still having that longing sense of nostalgia for the good times, it all felt so real.

And I think the really clever idea behind this episode, is that while Lucy may have found something to do with her life, i.e her new passion to be a reporter and a magazine writer, her life still has that gaping hole that’s been left open because of the loss of Fairy Tail and Natsu.

The board of all the Fairy Tail members is kind of creepy almost, and one can almost argue that Lucy has an unhealthy obsession with her old friends from Fairy Tail, but I think the way the whole concept is spun up makes it less so.

Lucy ends up channeling that intense desire to keep track of all her friends, and turns that into a career that she’s able to use to both financially support herself and keep herself busy. And through that quick glance we get of everyone from Fairy Tail and where they are at the moment, we do find out that Natsu and Happy are nowhere to be found.

In a sense, I like how Mashima-sensei is almost self-critiquing his own characters, and highlighting a huge flaw of there’s. Both Natsu and Makarov are kind of very impulsive people, and the fact that they just kind of decide to make these huge decisions for everyone, without thinking of the consequences on THOSE people, is really what I found to be the whole point of this episode.

Yes, Natsu needed to get stronger, but simply up and leaving without a proper goodbye to your friends, and quite frankly to the girl that’s clearly something more, is a really terrible move. Natsu and Happy might’ve happily went on their own journey, but there wasn’t even a second thought as to how Lucy would feel about it, or how alone she’d be.

Granted, I don’t think Natsu expected Fairy Tail to disband a day later, so a lot of the fault remains with Makarov as well. See, as far as Makarov goes, I can appreciate that he wants everyone to go on their own separate paths and grow and mature outside of the comfort of the guild, but… I think that’s inherently forcing your own viewpoints on everyone, rather than just thinking of them.

To a lot of the members of Fairy Tail, the guild was their home and family, so to suddenly just lose that because of whatever weird reason Makarov had for the disbandment, and not even being told why, would’ve hurt. It would’ve cut deep, and done the sort of things that Lucy only mentions in passing.

Yet, as I’m sure every one of us can attest to, these kinds of things just happen in life. A good thing just ends sometimes, and at the end of the day, you just live with that change and push forward.

To see that Lucy does that, that she’s able to separate herself from just being a member of Fairy Tail, is actually a great moment to witness in the series period.

I will say though, that for all that I love about the majority of this episode, the rather leering angles and the fanservicey focus on Lucy throughout the episode, was quite a bit disturbing at times.

I’m not entirely sure why there was a sudden shift from the more tasteful fanservice, to what we got this week, but I remember a similar episode cropping up around the time the first series was ending as well. Is this just A-1 Pictures way of driving home the fact that this brand and series has some marketability to the current Otaku market? Or is it just a little going away presented (regardless of taste) for the fans?

Who knows? I mean, it’s a bad sad to say, but its not entirely unexpected to see, both from Fairy Tail, but also just anime in general. Its unfortunate, but its just a problem that’s endemic to this particular story; Lucy will always be the fanservice girl of the series, on top of being one of its central characters.

Now, while a good decent chunk of this episode was about Lucy and how she had changed and moved on from her past life in Fairy Tail, the last few bits were about signaling another kind of change.

We finally see Natsu again, stronger, more gruffer, but nonetheless still the same guy that we saw quite a few months ago. Its nice to see Natsu all powered up, even if the whole “he melts stuff, especially clothes!” was a bit stupid.

In the end, we’re back at a new beginning for the story of Fairy Tail, and of Natsu, Lucy and Happy. This is the second starting point, probably for our big trek towards the actual conclusion of the story itself, and its just clever to see it start the same way the original series did, with Natsu and Happy running into Lucy.

Of course, for all this talk of new beginnings, we’re actually back in the same place we were as the last series was ending. Is Fairy Tail, the anime series, gone for good? Is it finally time for us anime fans to make the big jump to the manga? And what is this new project that’s being planned by the anime team?

Again, no definite answers here. For me personally, I’d rather just continue to see more of Fairy Tail, in animated form, and its really sad to see it go, again. I’ll talk more about Fairy Tail’s second series as a whole next week, but I think as a whole this episode, did two very important things.

One, it obviously caught us up with Fiore and Lucy after the big Tartaros Battle, which obviously is nice to see before we end up leaving this world in animated form, but also because it signals an change in the story and its characters from everything we’ve seen thus far.

Two, is of course, the subtle acknowledgement of the fact that Fairy Tail going away, sucks and that its not going to be easy for those of us that love the series so much. There’s an almost apologetic tone to it all, because at least as viewers, we can all empathize with Lucy and her struggles of moving on from something she loved so much.

In the end, I guess Fairy Tail is what it is. I’m looking forward to seeing what kind of note the series ends on next week, and whether there’s an announcement of a continuation in the future, or if this is the true end of the series in animated. Either way, next week is going be both big, and kind of bittersweet.

Note: No screenshots this week, since I’m traveling abroad. That’s also why this week’s post is late. I’ll have the screenshots up next week, and the episode review up in a more timely manner. Thanks for understanding!

Next week, It all ends. Sniff, sniff. See you all, one more time, next week.