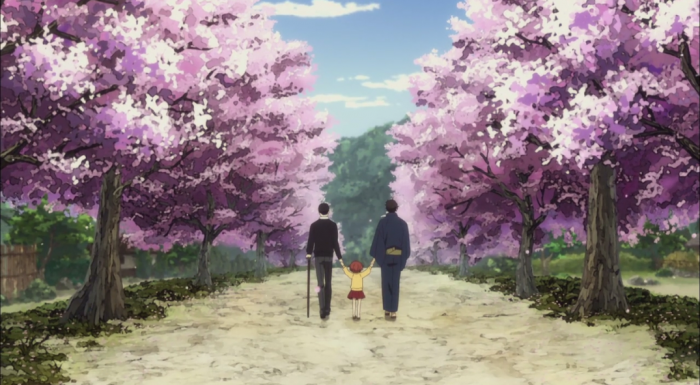 My goodness, was that a delightful episode. While Showa Genroku makes for a fascinating character study, it’s not what you’d call a “feel-good” series–our protagonist’s dour outlook, our cast’s ongoing struggles, and our knowledge of the eventual conclusion weigh too heavily on the story, infusing it with a quiet sorrow even in its brighter moments. This week, though, for perhaps the first time since the premiere (or at least since Kikuhiko’s first triumphant performance), we had an episode that was positively resplendent with joy. My grin was nearly as wide as Konatsu’s.

Not that things begin that way, mind you. Kikuhiko arrives in town to discover that Sukeroku’s life is in shambles: He’s unemployed, living in squalor, and Miyokichi has left him (a decision I can’t fault her for, although I sure can fault her for abandoning Konatsu in the process), meaning it’s up to his five-year-old daughter to keep the two fed. Disgusted with his friend and already grumpily fond of Konatsu, Kikuhiko storms back into Sukeroku’s life and kicks him in the pants, providing badly needed motivation and direction. And just like that, our RakuBros are together again. 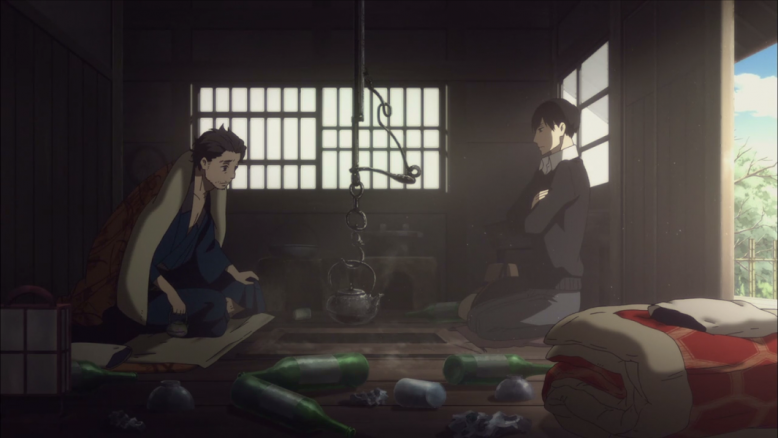 Kikuhiko in the light with the tidy futon, Sukeroku in the shadows with the mess…perfect shot to highlight contrasts.

As much as I want to grab Sukeroku and shake him ’til his teeth rattle, I’m also sympathetic, as his behavior goes well past laziness and into the realm of serious depression. I’m hesitant to talk too much about Miyokichi at this point given that we’ve only gotten one side of the story, and that from a child’s perspective (take note how Konatsu lays all the blame on Miyokichi, but Sukeroku never mentions her in his laundry list of reasons why he won’t do rakugo), but it’s clear their relationship was as destructive as I’d feared it would be.

Given all that, Kikuhiko’s return is as much about the emotional support he provides as it is the practical decisions he makes. There are two major moments that really hit Sukeroku: When Kikuhiko tells him he needs his rakugo, and when he begs him to perform “for Konatsu’s sake.” Sukeroku may not be able to see the audience’s faces, but he can see Kikuhiko and Konatsu, two people who love him and need him, and ultimately that’s what gets him to stand up and move forward again with both his life and calling, agreeing to his first proper show in years. 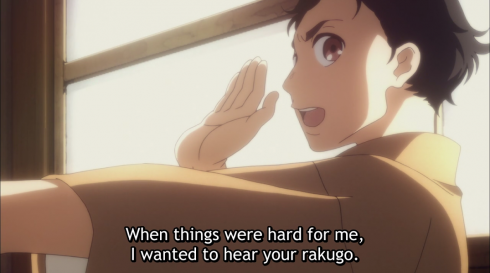 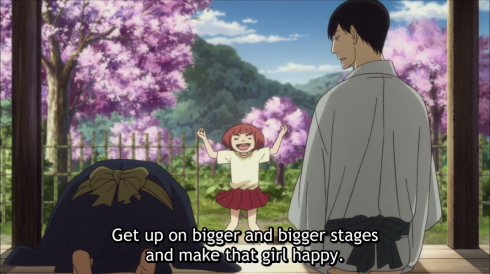 The idea of “seeing the audience’s faces”–and the emotional connection that comes with it–is integral to this episode, as it’s the personal bonds that allow not just Sukeroku but also Kikuhiko to rejuvenate himself. Kikuhiko has been successful without Sukeroku, but he’s also been unhappy, wrapped up in his professional life (and a series of public masks, from well-behaved student to proper shin’uchi) and totally cut off from a personal one.

As he explains to Sukeroku in the baths (secluded from the sight of others and free from the trappings of society), he’s been living his life according to a sense of what he “should” do–he’s not allowed to complain, he’s not allowed to have fun, he needs to dress properly, he needs to take a wife–and it’s been slowly wearing away at him, leaving him a weary-eyed shinigami, as Sukeroku notes. Kikuhiko needs a place (and people) where he can stop performing and just be himself, with all the grouchy kindness that entails. 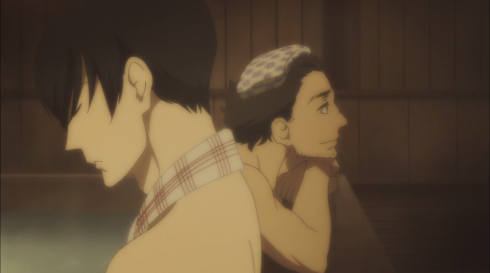 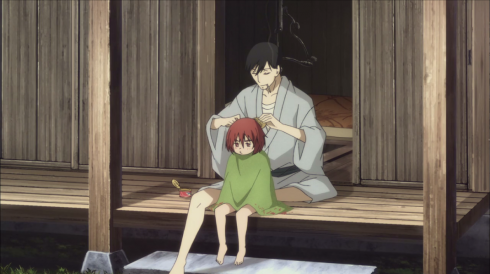 And Kikuhiko does find happiness in this quiet mountain town, away from the expectations of the Rakugo Association and society in general. I think he smiles honestly more times in this episode than in the last few combined, as the black walls of the past weeks fall away and he opens himself up, not just to Sukeroku and Konatsu, but also to the tiny, intimate audiences at his shows. For the first time in a long time, he feels needed and wanted again, and it grants an exuberance to his rakugo we haven’t seen since…well, maybe ever, but certainly not since his earliest performances, those first few outings when Sukeroku (and Miyokichi) supported him and he was able to truly express himself on stage.

All of which culminates in easily the cutest and most joyous performance of the series, as Kikuhiko and Sukeroku present their long-promised two-man show for an adoring audience of one. They break all the rakugo rules here–skipping the introduction, performing together, allowing audience participation–which gives them the chance to break social rules as well, using their roles and lines to all but declare their love and fidelity to one another. Kikuhiko has always expressed himself best on stage, and so it is here, as he takes on the role of the lover and is able to initiate physical affection, even openly flirting with Sukeroku, and there’s so much unabashed glee here that it’s clearly more than “just part of the performance.” 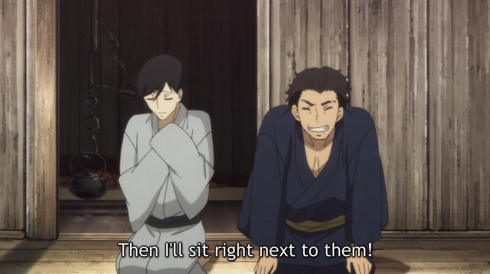 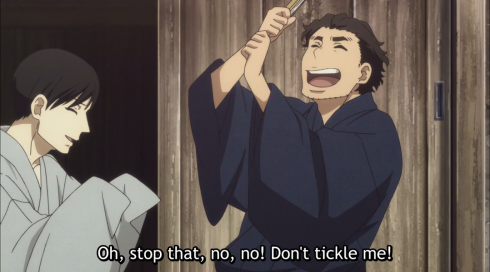 I’ve spent 10 posts tap-dancing around the issue of Kikuhiko’s sexuality, hesitant to slap a label on it or his relationship with Sukeroku. I have my own interpretation, sure, and have touched on that from time to time, but I’m resistant to declaring any kind of Canonical Truth, because I think the series itself is resistant to that as well. SGRS has spent a lot of time showing how cultural expectations can restrict individuals, pressuring people to behave in a certain way even if that goes against their temperaments, wants, or needs. Kikuhiko pretends to conform and it leaves him self-conscious and isolated; Sukeroku rebels and is cast out; Miyokichi fully conforms at the expense of her own sense of self.

We’ve seen how all these cut-and-dried boxes, all these “roles,” can suffocate the unique individuals who get crammed into them. So maybe we shouldn’t demand that our cast be defined by overly simplistic terms and expectations. Not that you can’t have a personal interpretation, of course–you absolutely should! I sure do!–but that, in the grand scheme of the story, maybe it doesn’t matter if Kikuhiko is explicitly gay or bisexual or asexual or whatever else. Maybe it’s enough to know that he loves Sukeroku, and is growing to love Konatsu, and that the three of them can be happy with the unique relationship they’ve come to have.

Granted, we know it won’t last. But, like the rakugo shows that help audiences forget their troubles, it sure was nice to have a few moments of escape. 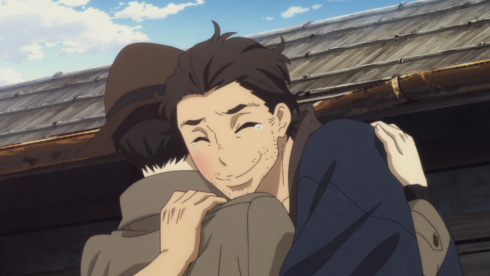 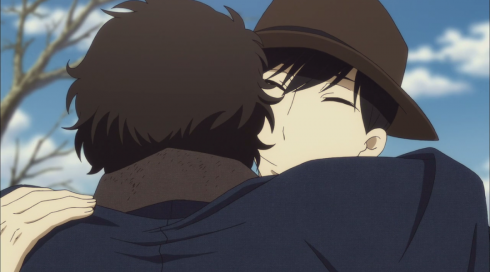