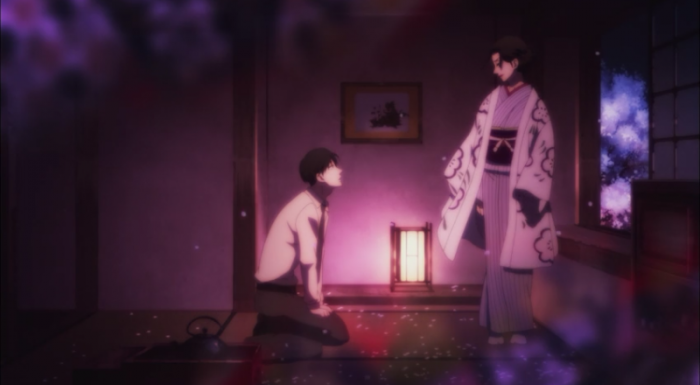 I had a moment after this week’s Showa Genroku where all I could do was stare at the end credits while making little half-articulated “wow” noises. That was a beautiful, haunting, painful, stunning 22 minutes, so riveting that I straight-up forgot to take notes my first time through. Regardless of how the next few weeks pan out, after an episode like that I feel confident in saying that SGRS has already established itself as something truly special, an achievement in character writing and visual direction, using its art and music and phenomenal vocal performances to create a whole even greater than the sum of its fantastic parts. Two days later and I’m still trying to lift my jaw up off the floor.

And now I get the daunting task of flailing around, attempting to put that experience into words. There’s so much we could talk about, and I definitely want to dig into my favorite subjects of cultural context and character interactions to some extent. But in an episode this visually striking, I really think we need to start with the recurring images and motifs. 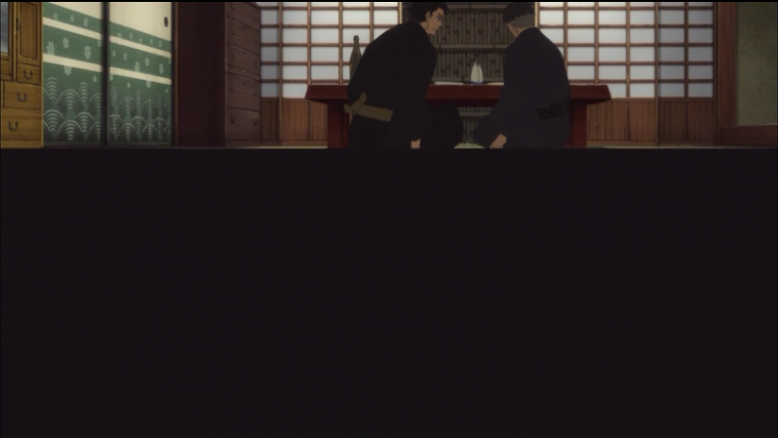 Lest this devolve into an exhaustive shot-by-shot breakdown, I’ll use bullet points to quickly touch on the main motifs and their placement in the story, relying on pictures (I took so many screenshots!) to say their 1000 words. So here we go: 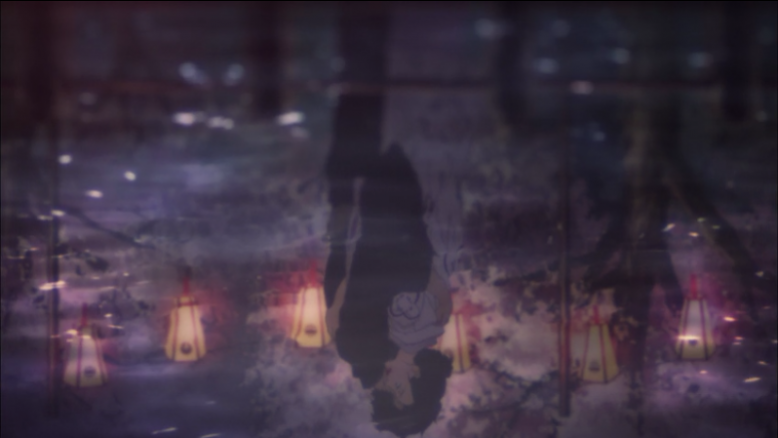 There are other great visuals, no doubt, but these are the ones that jumped out at me, because I think they come together to serve two interconnected purposes. The first is emotional: The majority of our cast is trapped and drowning and isolated from one another (emotionally if not physically), struggling to figure out what their role is in this world and how they can play it. We’ll talk a little more about that later.

The second is tonal, or maybe thematic: We slowly shifted from Yakumo’s distant narrative to the immediacy of Kikuhiko’s reality, and now we’re shifting back out again, seeing more outright artistic or “unreal” touches–stills reminiscent of emakimono or manga; frames reminiscent of rakugo stages–to remind us that we are still very much within someone else’s story, a story whose ending we already know. As if that weren’t enough, our long-absent Yakumo Narrator Voice even makes his return at the very end, touched with the same weary sadness, the weight of inevitability, as the episode’s images carry. The bars are closing in, the waters are rising, and there’s nothing any of us–not even our storyteller–can do about it. 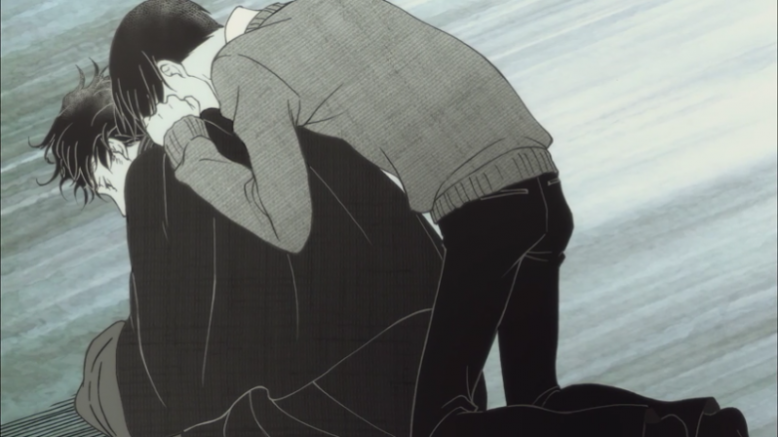 So. SGRS is a tragedy. We’ve known that for a while now. Tragedies generally come about for two reasons: A character’s “tragic flaw,” yes, but also the broader tragedy of existence; i.e., “I am a single person caught in a current of cultural and natural forces more powerful than myself.” Oedipus gets stuck in a prophecy, tries to thwart it, and winds up making it come true. Hamlet gets embroiled in a political coup, tries to avenge his father, and loses everything. (Er, spoiler alert?) Yes, their flaws helped doom them, but so too did the sheer enormity of the powers they were trying to fight.

I bring all this up so we can talk more about something I’ve touched on a few times before: The split between the traditional and the modern, and the cultural uncertainty of the Showa Era. Japan’s historical relationship with western culture is complicated–at times embraced, at other times condemned, and oftentimes cherry-picked–and the American occupation was just one (albeit fairly integral) part in a century-long push-and-pull between “traditional Japanese culture” and “modern western culture” that continues to this day. In addition to their own individual histories, our characters are very much a part of this Capital-H History as well, and many of their conflicts are informed by it. 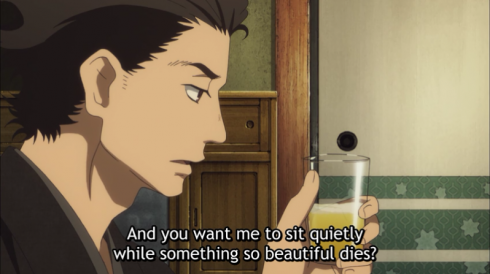 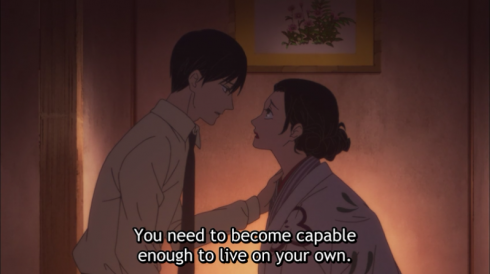 Confucianism and cultural collectivism–with its rigid hierarchies, focus on filial piety, and importance placed on ritual and tradition–was being challenged by western individualism and the ideal of democratic equality. Capitalism was on the rise. Mandatory public education was instated for all genders. Anti-prostitution laws were enforced. In theory, at least, people had a lot more freedom than they did previously, especially women, but a lot less stability as well. Konatsu will benefit from many of these changes, as perhaps will Yotaro. But for our cast, trapped between two cultures and times, these rapid shifts create a lot of the tumult we see this week.

Certainly Sukeroku’s “modern” individualism (coupled with his stubborn pride) causes his fall from grace this week, as the old guard is determined to preserve the traditional rakugo of their predecessors and remove any elements that don’t fit their strict vision of what rakugo “should” be. The master speaks of wa (和; harmony/peace), but what he really means is stasis. He sees change and destruction as the same thing and, while he’s willing to let a certain amount of propriety slide, he ultimately rejects Sukeroku because of his lack of respect for the tradition–and, by extension, for the “legacy” handed down by the Yakumo masters who came before him. 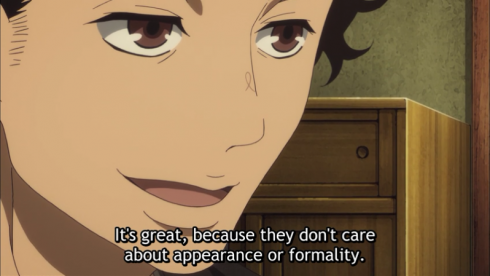 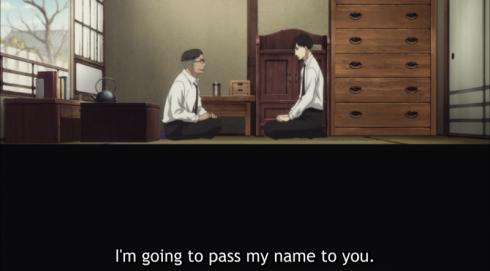 While Kikuhiko actually values community less than Sukeroku, performing rakugo for his own fulfillment, he’s a shrewd survivor who’s willing to “go along to get along” if it lets him remain on the stage. (I also think he feels enough genuine respect for his master and plays the game for his sake.) Where I think Kikuhiko feels the strong pull of the cultural tides is more on the personal side, as we’ve seen that he’s uncomfortable with the traditional masculinity and heteronormativity of the period. He’s successful, sure, but he’s also constantly performing and increasingly more alone, and his choice to cave to cultural expectations (publicly if not always privately) has been a big part of that.

One thing I will give Kikuhiko this week: He never quite knows how to deal with people, and he’s always half-recoiled as if bracing himself against inevitable abandonment, but he does, in his own quiet, self-conscious way, try to fight for the people he cares about. He scolds the master by reminding him that Miyokichi is “a person too,” and he begs him to take Sukeroku back. Kikuhiko really has no interest in the Yakumo name–he wants it for his friend and feels that he deserves it. Whatever jealousy and dissatisfaction Kikuhiko’s been carrying with him, there’s no question he loves Sukeroku and his rakugo, and can’t imagine a world where those constants aren’t in his life. 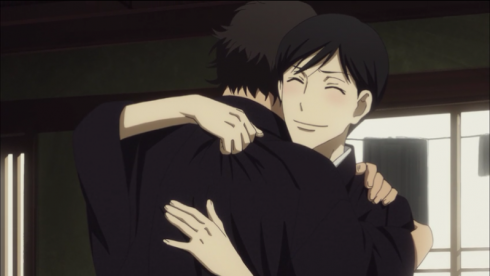 Still, the person who’s really suffering in this Brave New World is Miyokichi. I confess that, from my cultural position as a woman in modern-day America, it is sometimes very hard for me to sympathize with Miyokichi. When Kikuhiko encourages her to learn how to support herself and live her own life, my knee-jerk reaction is “Yeah, you tell her, Kiku!” But really, that’s my privilege talking–and Kikuhiko’s privilege, too.

It’s easy to say “live your own life” as a man in mid-1900s Japan (or as a woman in 2010s America), but Miyokichi grew up in a world that expected her to be subservient to men, marry young, and live for her husband and children. She was raised to want a life that’s swiftly becoming unavailable to her. Thanks to her gender, age, and upbringing, her options are not only limited, but she’s poorly equipped to pursue them. Her situation is precarious and growing more so each day. That she would be willing to change herself entirely in order to find even the illusion of stability isn’t surprising, nor is her rage at Kikuhiko for “talking down” to her and assuming he understands her situation. “You don’t even know my real name,” she snaps, and she’s snapping it as much at the modern audience as she is at him. 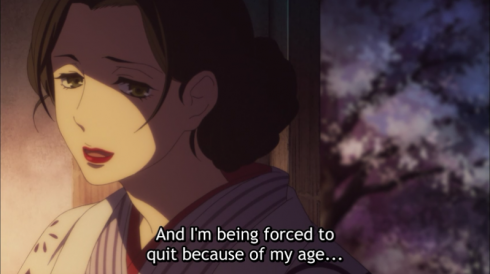 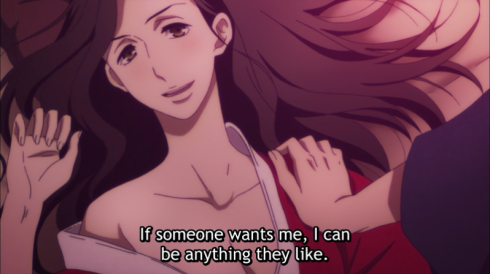 I’ve run up against my self-imposed word limit, so we’ll have to take any other extended conversations to the comments section, but a quick thought on SGRS‘s use of limited perspective. Okay, two quick thoughts. First, finding out that Sukeroku has always seen Kikuhiko as the “chosen son” was an eye-opening moment that retroactively effects our reading of all their interactions and puts a fascinating spin on Sukeroku’s character. Second, Miyokichi treads this incredible line between a trapped person struggling to find happiness and a vengeful monster intentionally trying to pull Sukeroku away from rakugo to get her “revenge” on Kikuhiko.

Since this story is being told by an older Kikuhiko, the way the other characters are portrayed, lit, and framed tells us more about how he remembers them (or how he imagines certain events unfolding) than how they actually were. It suggests that our narrator still loves Sukeroku and sees him as a tragic figure, but is less certain how to feel about Miyokichi, fluctuating between resentful and sympathetic. Perhaps that’s why I find myself so often feeling the same.