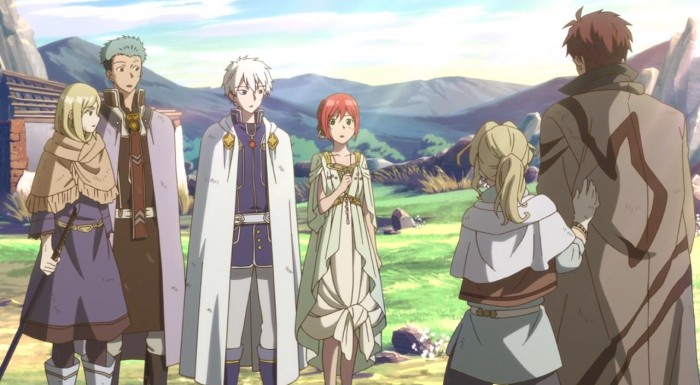 So wait… After all that turbulence we experienced from the show’s big jump into a full on adventure story… This is it? Really? I mean, err… Really?

In perhaps the biggest surprise thus far from the series, this week’s Akagami no Shirayuki-hime episode wasn’t terribly bad, exceptionally great or even unexpected, it was just average and decent. 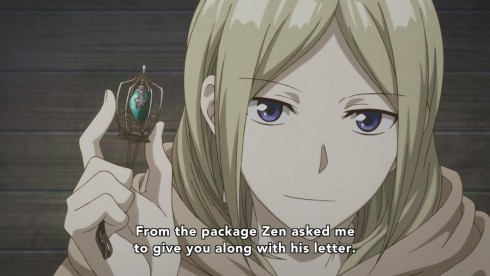 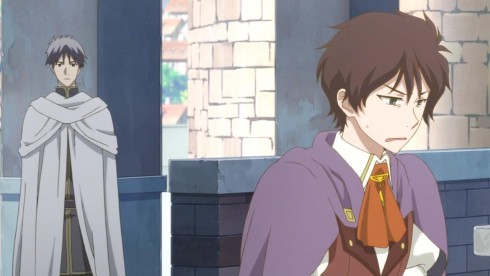 The mediocrity of just being “okay” is an entirely new sensation when it comes to this show, because its always oscillated between two extremes. Akagami no Shirayuki has either been really darn good, or its been frustratingly hard to deal with. And to be honest, while the last few episodes didn’t set well with me, I did respect the show for trying to branch out and strive to become something beyond its original limits.

By the end of last week, I was pretty darn sold on the whole “Zen and Raj are going to go and rescue Shirayuki with some crazy plan”. But… Try as Akizuki-sensei may, she’s not a fantasy adventure mangaka. The resolution we do get, after weeks of wait, is pretty lackluster, luke warm, despite a few highlights here and there. 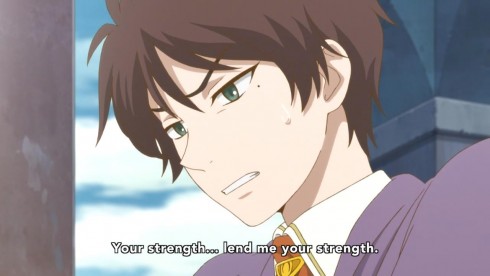 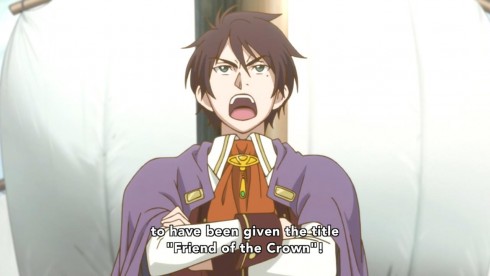 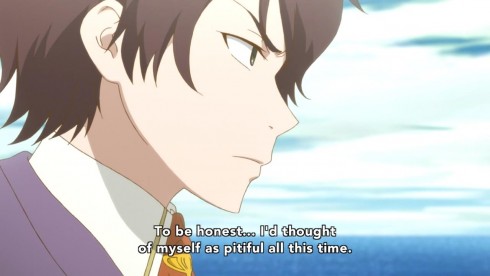 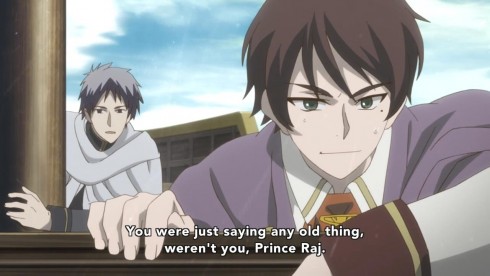 The biggest issue with this episode, is that it doesn’t really do anything too special with the whole battle between the good guys and the Claw of the Sea Pirates. The only real surprise we get from the show, is seeing Raj become even more admirable of a prince, and really become someone impressive. Raj fully makes the transition from slimey weasel to an impressive and admirable leader and heroic character in his own right.

The change isn’t over the top, but its clearly there, and I have to give props to the show and the story arc, for really transforming Raj into a character that deserves a serious place in the recurring cast of characters. But while Raj is the perhaps this episode’s crowning achievement, he’s unfortunately the only real thing that provides any sense of surprise. 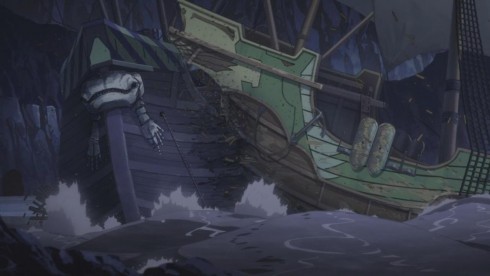 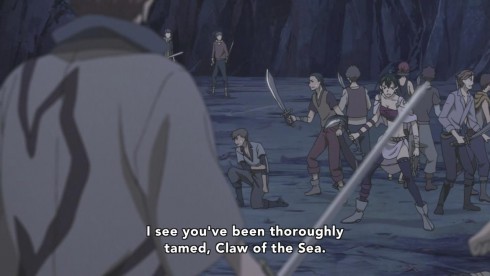 Once Raj strikes the Sea Claw Ship with his own, and follows them past the Blue Vortex, everything else is pretty cliche and stereotypical from there on out. There’s no clever plan or big reversal from Zen and the rest. They just attack Umihebi from behind, after having already taken care of her hideout.

Its unfortunate and more than a little disappointing of a finish, if only because the series’ spent around 3 episodes building up to all these characters getting some pay back. Yet the actual confrontation becomes little more than a shouting match, before Zen and the rest take care of everything. 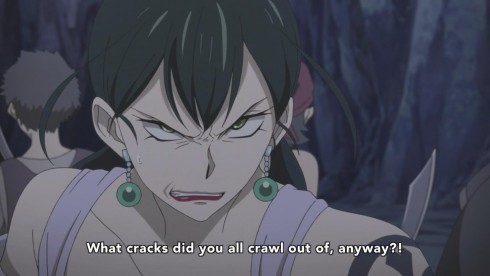 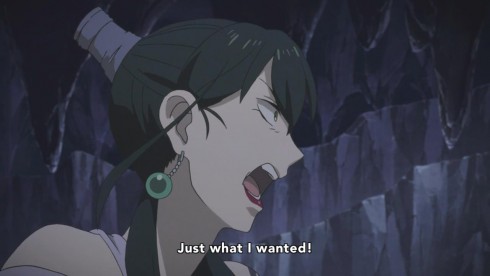 Umihebi, as a villain, just utterly and completely falls on her face. Unlike say… Every character we’ve seen in the show thus far, she’s very one dimensional and lacks any depth to her motivations or character at all. She’s just an evil, cartoony villain that shouts and screams at everyone as she is quickly taken down.

There’s nothing triumphant about the battle with Umihebi and her fall. There’s no sense of irony, no major awesome moment, no sense of gratification. Zen has a huge bone to pick with Umihebi, for you know, kidnapping and hurting his girl, yet that anger hardly ever shows. Obi, for all the anger and self hate he’s gone through, doesn’t even strike down Umihebi at all. 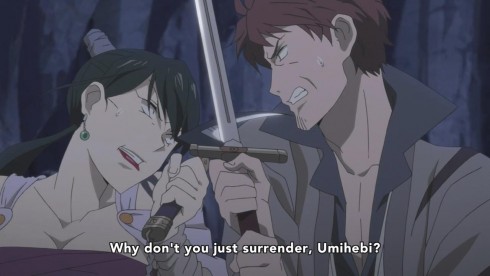 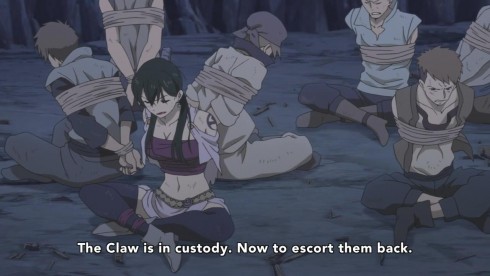 The one who actually takes down Umihebi in the end is neither Zen, nor Obi, nor even Kiki or Mitsuhide, but rather Shirayuki’s dad. Oh yeah, the Chief of the Mountain Lions is actually Shirayuki’s dad. Wait… What?

I’m seriously almost insulted by how shamelessly the show pulls that card out at the end of the episode. After no mention of Shirayuki’s parents, we’re supposed to believe that Shirayuki has a dad, one that she knows about? Really? REALLY? 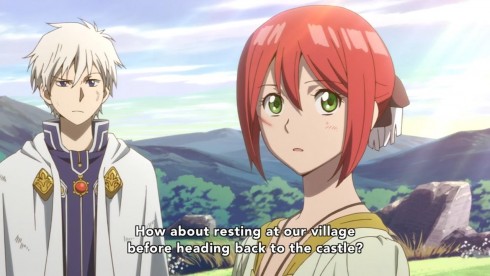 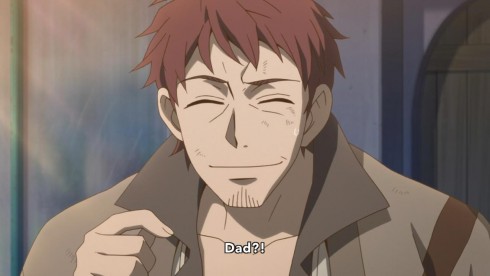 I know I’m being exceedingly harsh on the show, but despite not actually disliking the episode as much as it probably sounds, man was everything just so plain and unoriginal. There’s just nothing all too great or epic about this finish, and any potential that this story arc DOES have, is almost entirely squandered too.

We don’t get a powerful moment of our heroes prevailing thanks to their smarts, wits or goodness. Instead, they just take down a screaming, blithering idiot of a woman, as she helplessly just rushes at them. And the heroes aren’t any more graceful than her, as they just rush at her and power through it all via brute force. 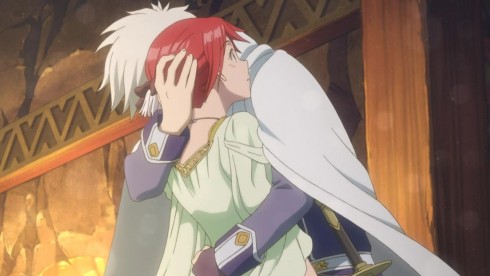 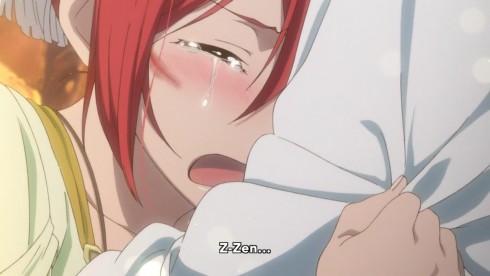 The sad part is that we gain almost nothing of note from this whole ordeal (besides maybe Raj’s redemption). We finally had a moment for Kiki to shine and actually do something, and we hardly if ever, see her and Shirayuki do much of anything.

Shirayuki herself, doesn’t do anything other than get saved by Zen and just break down and cry when she finally does get to see him. Listen, I get that Shirayuki is finally able to be vunerable around Zen, and I appreciate the moment but… I wish she had done more, and shown us another one of those impressive actions that made her so awe inspiring in the first cour. But no, all we get is Shirayuki just chilling upstairs, in safety, while Zen and the rest do all the fighting. 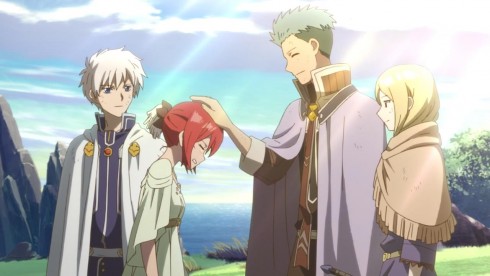 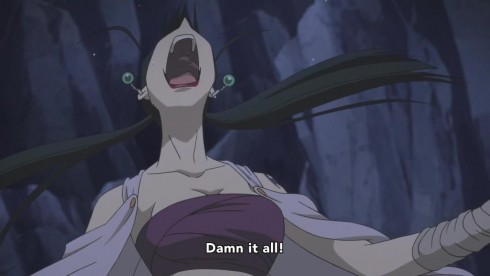 Look, I’ll freely admit to actually not noticing or seeing all these problems in the moment, when they were actually happening. I fully and completely admit to going with the flow, and actually finding the whole thing to be pretty fun and enjoyable to watch. But the second that roller coaster ride of an episode actually slowed down to a finish, I couldn’t help but feel empty and cheated.

It was at the end of the episode,after the “big” reveal of Shirayuki’s dad came out, that all that disappointment and realization just hit me. “Is that really it? Really?” Was the only thing that I could think as the ED theme played. And I think this entire post has been a rather raw reaction to what this episode produced. 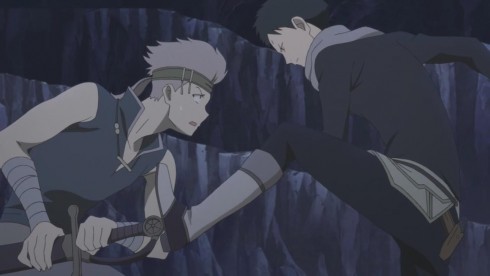 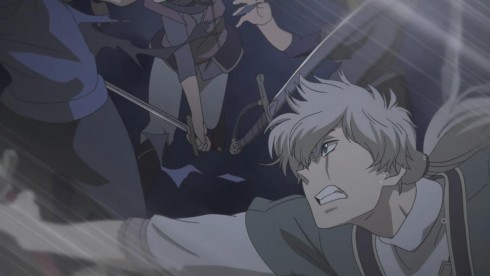 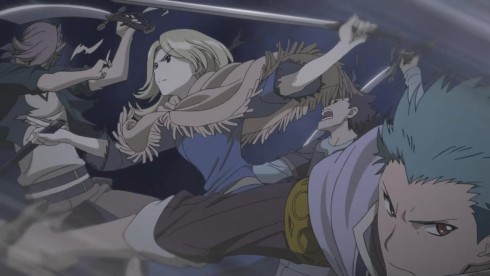 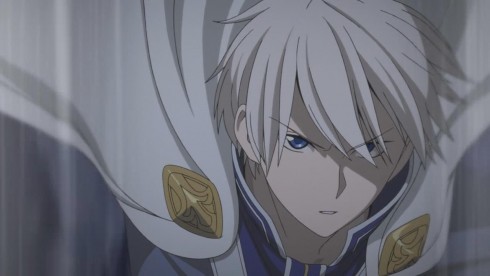 This week’s episode isn’t offensive, it isn’t entirely horrible, but its the mundane, mediocre quality of the wrap up, the throwaway nature of the conclusion, that really just hurts. It hurts me because I don’t think I can really go back to holding Akagami no Shirayuki-hime on the pedestal that I long had it on.

Instead, I think I really am just going to adjust my expectations for this show. If it continues down the path of “adventure fantasy romp”, then I’ll just have to look at it as a B-tier show, one that just doesn’t ever reach the power and level of omph! that the Shoujo Romance version of the show had. 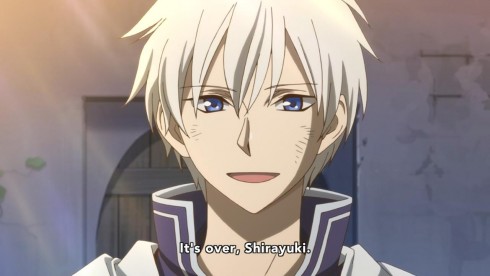 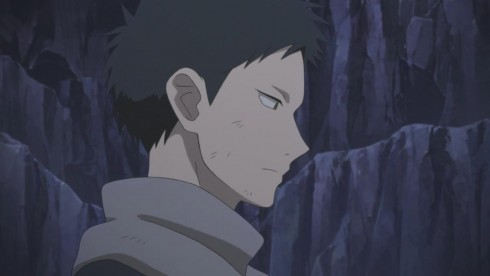 Do I hope that this whole story was a terrible misstep, and that the show will course correct itself back to the stuff that it excels at? Yeah I do. I really do hope that Akagami no Shirayuki-hime has learned its lesson, and is going to steer away from everything that it did these past few weeks. Maybe I’m in the minority, maybe you enjoyed this episode a lot more than I did, maybe I’m being too harsh on a show that’s just good clean fun, but I can’t help but feel the way I do.

I feel that Akagami no Shirayuki has been a lesser show for a while now, and I really do believe that it hit its all time low in this episode. If there’s a silver lining to this whole thing story arc, its that the show can only go up from here, because there simply is no other way to go. 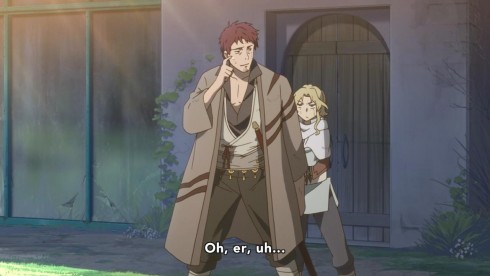 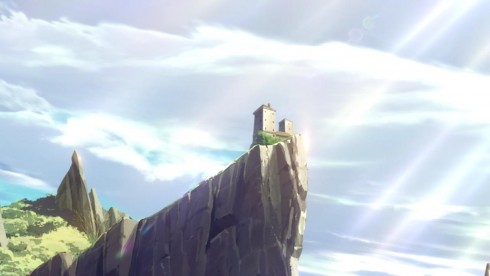 Look, I really don’t mean to sound like a jerk when I say that, honest. I really do feel like, in some ways, the worst may be behind us. I really do want to think that Akagami no Shirayuki-hime and Akizuki-sensei have gotten whatever weird bug they had, out of their system, and that next week will make it all better. I suppose we’ll just have to wait, and find out, won’t we? 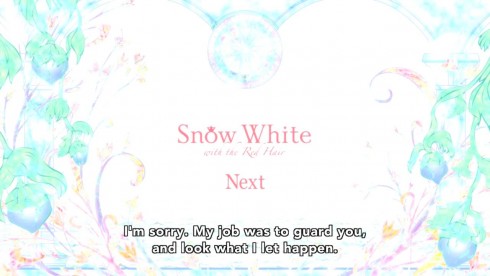 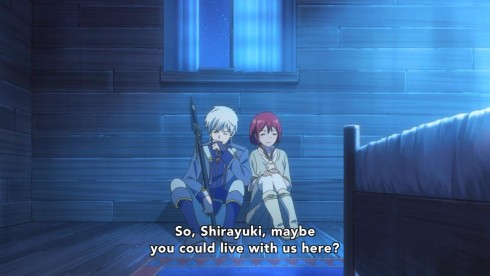 Seems like we’ll be exploring some of the fallout from Obi’s failure to protect Shirayuki. Hopefully this particular drama subplot brings some of the emotional power back into the show… Hopefully.